Have you ever traded houses with someone? I mean, for keeps? In 1905, George and Irene Douglas traded their Cedar Rapids city home for a mansion, located about two miles away, which would become known as Brucemore. During a tour of the 16,000 square foot Brucemore, I not only took in the opulence of the home’s design and furnishings, but also learned about the fascinating lives of two families who lived there.

Editor’s note: Cedar Rapids, hometown of famed artist, Grant Wood, is celebrating Wood’s 125th birthday in 2016. Every attraction I visited in Cedar Rapids has a Grant Wood connection, including the carriage house of the Douglas family’s original home in the city, which became Wood’s studio.

Brucemore has most closely been restored to the time that the George Bruce Douglas family lived there. The name of the estate was taken from Douglas’ middle name and the moors of Scotland. Douglas was of Scot descent, and the estate grounds reminded him of Scotland’s moors.

George and Irene Douglas raised three girls at Brucemore. George, an industrialist prominent in Cedar Rapids, first worked in his father’s cereal company, which eventually merged with Quaker Oats. Besides other businesses, George and his brother also started a company that produced corn starch, laundry starch, animal feed and more.

George’s wife, Irene, was a patron of the arts and president of the local arts council. In fact, the entire Douglas family enjoyed the arts, including music. They would often listen to music in the evening on their Edison phonograph in the study. The study was also where the girls might have done their schoolwork, or where Mr. Douglas would do some paperwork. 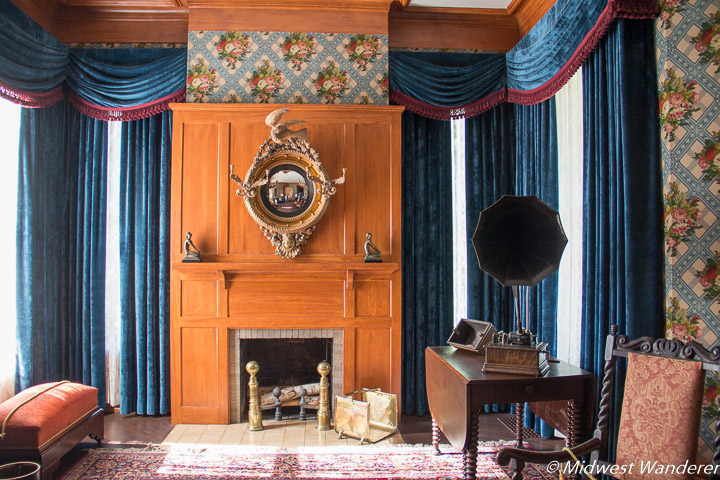 Although all three daughters learned to play different musical instruments, the youngest, Barbara, was the most musically talented. She learned to play the piano, harp, organ, and other instruments. The family actually owned a 1929 Skinner player pipe organ, which is still in the home. The two keyboard organ can be played, or a roll can be put into it to play mechanically, much like a player piano. A third-floor bedroom was converted to space for the 715 organ pipes. The organ, which is currently undergoing restoration, is played during the Christmas season. Our guide, Jessica Peel-Austin, Manager of Interpretation and Collections, said that when the organ is playing, music fills the entire house.

The eldest Douglas daughter, Margaret’s art talent was in sculpting. Margaret trained with some of the best female sculptors in the country while she attended school in New York and Boston and became a very talented sculptor herself. It was common in those days to train under someone of your own gender.

Another talent in the Douglas household was book binding. Irene Douglas, also an avid book collector, trained with some of the best female book binders of the period. She traveled to New York at least once a year for training and actually built her own book bindery on the estate. An entire Shakespeare series that Irene hand bound is on display in the home’s library. 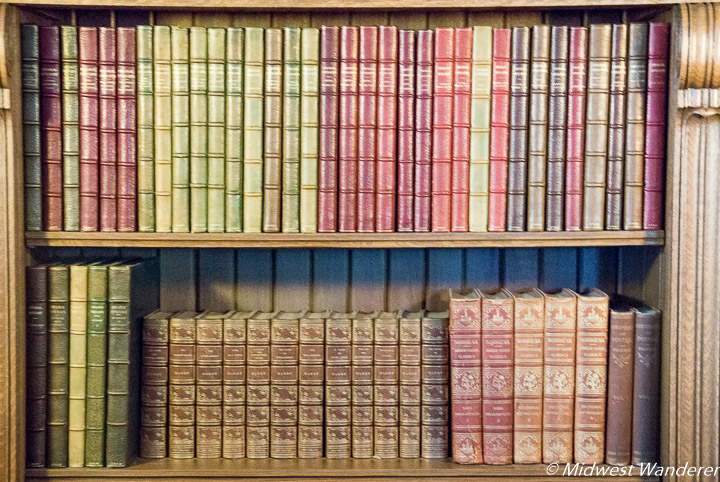 A couple of other artistic pieces, the like of which I had never seen before, are displayed in the dining room. An epergne served as the table’s centerpiece. An epergne is designed so you could have a floral arrangement on the table, but the flowers are dispersed so you can still see through it and have conversation.

The other interesting dining room item was the cutlery urn, which Jessica said were antiques even when the Douglas family lived there. There are holes inside the urn in which to store silver safely. The urn also prevents the silver from tarnishing.

Moving upstairs, the most prized art possession in the mansion is the sleeping porch that Grant Wood decorated.

Being active in the arts community, Irene became associated with Grant Wood, who also lived in Cedar Rapids. Wood is the American artist best known for painting American Gothic.

Irene hired Wood to decorate daughter Barbara’s sleeping porch. Unlike anything else that he ever did, Grant created a plaster relief mural on the sleeping porch walls. The mural depicts a woodland with vines and whimsical animals, including a owl, a rabbit and a squirrel.

Irene paid Grant Wood $182 for his work in 1925. Today the porch is worth approximately $3.5 million, although of course, it could never be removed from the house. 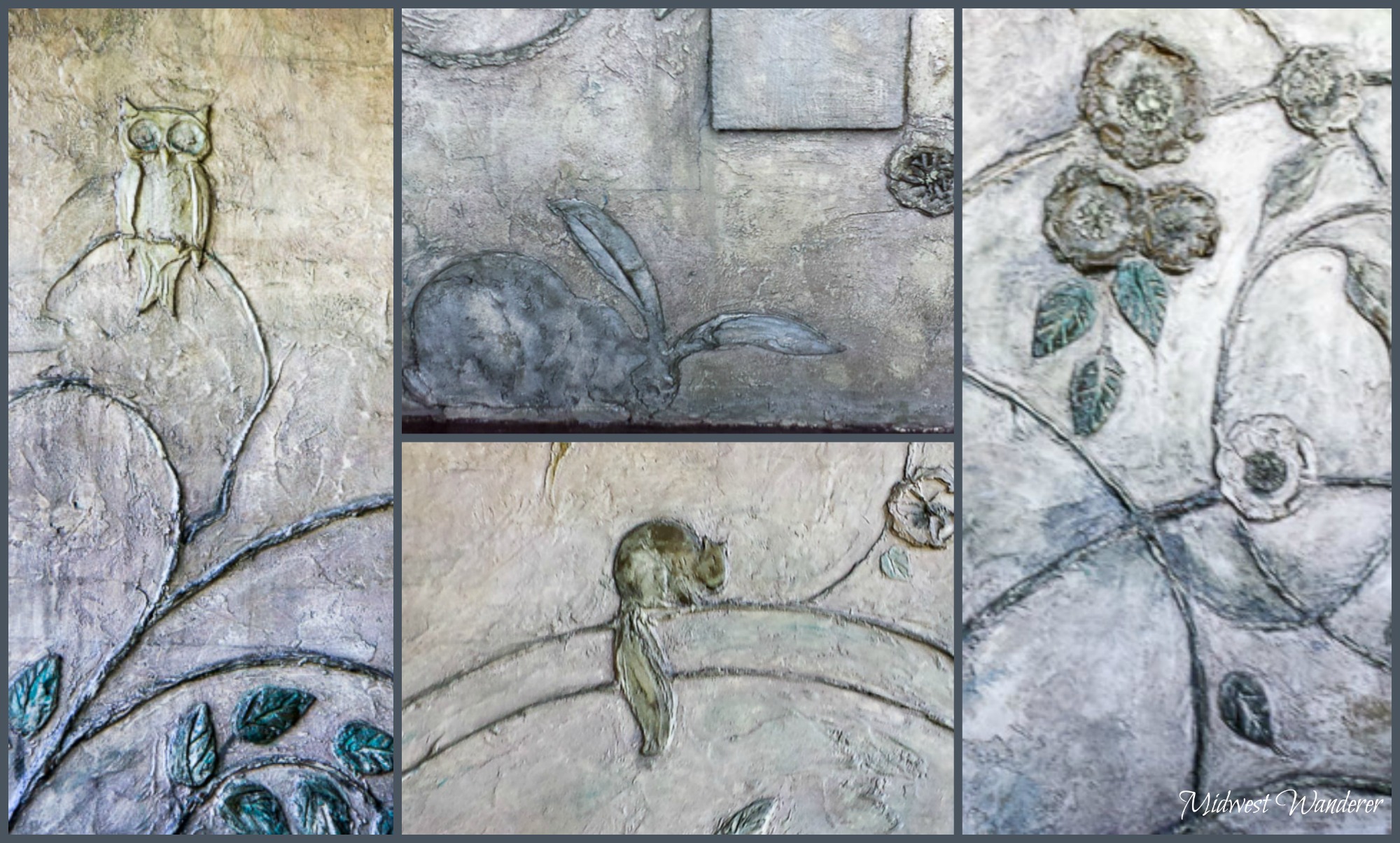 Following George’s death in 1923 and Irene’s in 1937, their eldest daughter, Margaret, inherited the estate. She lived there with her husband, Howard Hall. Hall was a partner in, and president of, the Iowa Steel and Iron Works, the largest producer of rock crushing equipment. The company was instrumental in the highway building movement.

Howard and Margaret Hall didn’t have any children. However, they did keep exotic pets. Over the years they owned three lions, each of them named Leo. At least one of the lions was the descendant of the MGM lion.  Howard would often get down on the ground and wrestle with the lions, the way some people might do with their dog. The Halls also always had at least two German Shepherds.

Although most of Brucemore is restored to the George and Irene Douglas era, the basement is kept as Howard decorated it. So different from the formal décor in the rest of the house, today the basement might be referred to as Howard’s man cave. He called it the Tahitian Room. 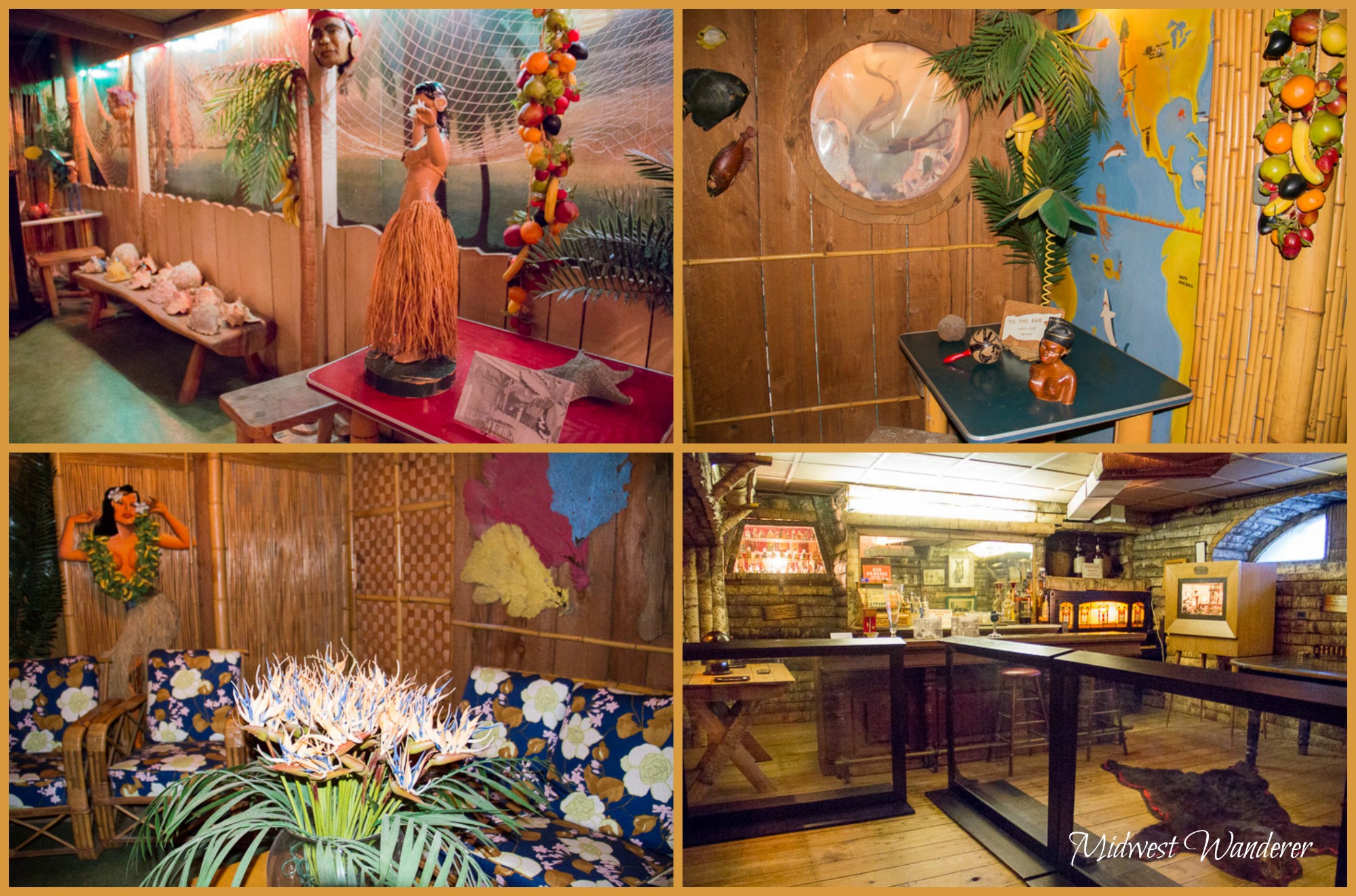 Most likely one of the earliest instances of a basement being used for living space rather than just storage, Howard often entertained business clients there. He obviously was a fun-loving guy with a sense of humor and enjoyed the kitschy décor.

Howard also spent quite a bit of time in Hollywood. A collage of Hollywood photographs hangs on a basement wall. He knew Olivia De Havilland’s stand-in and was able to get behind the scenes on the Gone with the Wind set during filming. He took his own home movie on the set and got footage of some of the behind-the-scenes stuff. You can see that footage, as well as film of Howard playing with his lions, in the Brucemore visitor center. 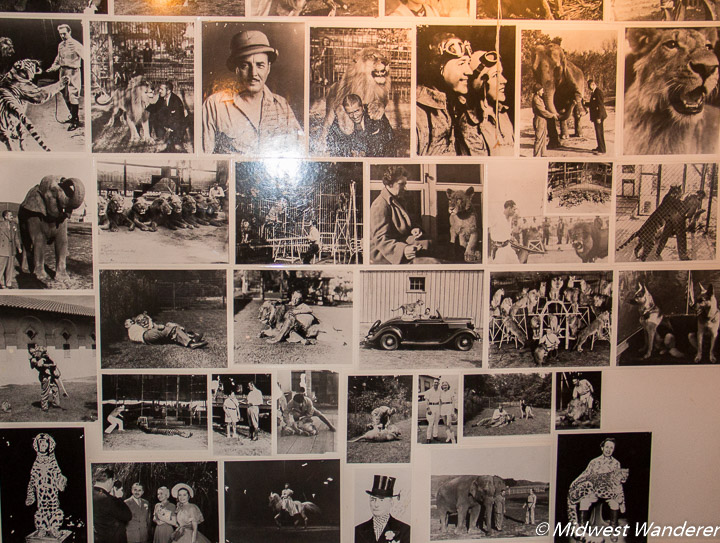 If you visit Brucemore

Accommodations: We stayed at the Hotel at Kirkwood Center during our visit to Cedar Rapids. Find the best deal, compare prices, and read what other travelers have to say at TripAdvisor.

Disclosures: My visit to Cedar Rapids was hosted byt e Iowa Tourism Office. My admission to Brucemore was complimentary; however, any opinions expressed in this article are my own.
This article contains an affiliate link. If you book a room through this link, I will receive a small commission at no additional cost to you.

4 thoughts on “Brucemore: The Mansion and the People Who Lived There”

Before this summer, I knew little about Wild Bill Hickok. Then, within just a few weeks, we visited three places within Kansas and Illinois that all shared Hickok stories—quite a coincidence. I learned several fascinating facts about him. Here are END_OF_DOCUMENT_TOKEN_TO_BE_REPLACED