Walking the trails through Cahokia Mounds, it’s hard to fathom that a thousand years ago the area was more populous than London at the time, that as many as 20,000 Native Americans belonging to the Mississippian culture thrived in a structured community here. Mounds that were used for burials or as bases for buildings still exist. Over 300,000 visitors come from all over the world each year to see the largest prehistoric Indian site north of Central Mexico, and it’s right here in the Midwest, in rural Illinois ten miles from St. Louis.

Start your visit with the orientation film at the Interpretive Center for an overview of the Mississippian culture. Learn about Monks Mound, the largest earthen mound in North America, covering 14 acres, the mound that at one time held a building 104 feet by 48 feet, the building from which the leader ruled and lived.  A 40-50 acre rectangular plaza, surrounded by 17 mounds, was most likely used for games. Learn about the thatch-roofed homes the people lived in, the tools they used, and the crops they grew.

Following the orientation film, browse the museum exhibits that include tools and weapons found in the area during archeological excavations. 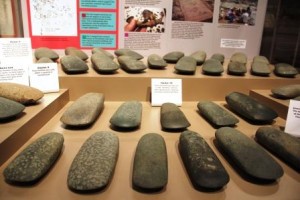 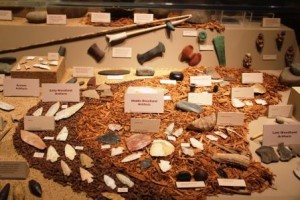 Other exhibits and a diorama explain the archeological excavation process. 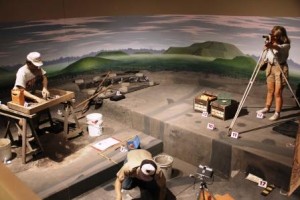 A large display depicts several scenes of Mississippians at work and play. 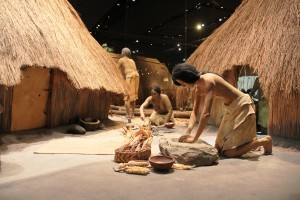 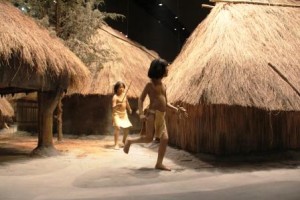 Outside, walk some of the ten miles of trails to view the plaza and mounds you learned about during the orientation. 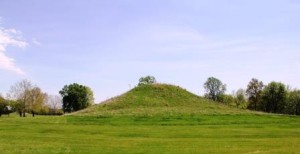 A section of the stockade that surrounded the plaza has  been reproduced. 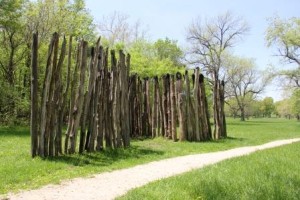 Across the road (drive or walk there) climb the stairs to the top of Monks Mound. You can view much of the area from here. 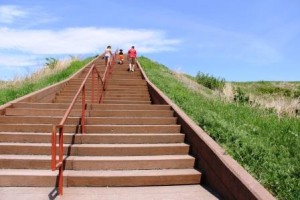 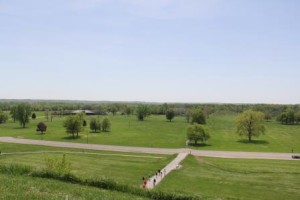 You can also see clear across to St. Louis 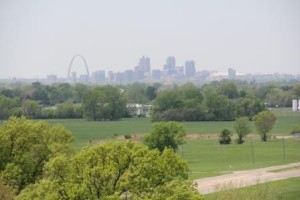 Down the road is a reproduction of a sun calendar built of red cedar poles. The sun calendar, known as Woodhenge, was rebuilt four times during the time the Mississippians lived here.  With each rebuild 12 more poles were added, with 72 poles in the final version.

No one knows what caused the abandonment of Cahokia Mounds. The population decline, which began in the 1200s, may have been caused by depletion of resources, disease or political disruption. As studies continue, we’ll learn more about what life was like for those who lived a thousand years before us in the Midwest.

Before this summer, I knew little about Wild Bill Hickok. Then, within just a few weeks, we visited three places within Kansas and Illinois that all shared Hickok stories—quite a coincidence. I learned several fascinating facts about him. Here are END_OF_DOCUMENT_TOKEN_TO_BE_REPLACED