One of the first amusement park rides you ever rode as a child was most likely the carousel. You chose the most colorful and bejeweled horse. Your tiny legs sprawled across the saddle, not nearly long enough to reach the stirrups. You squeezed the brass pole, one sweaty hand above the other, excited and nervous at the same time. Mom or dad stood next to you, holding you, reassuring you’d be safe. As the calliope music began and the carousel started to turn, your horse inched forward and at the same time began to rise and glide down again, over and over. The ride picked up the pace until you reached a smooth gallop on the twirling carousel, the world around you passing by in a blur. 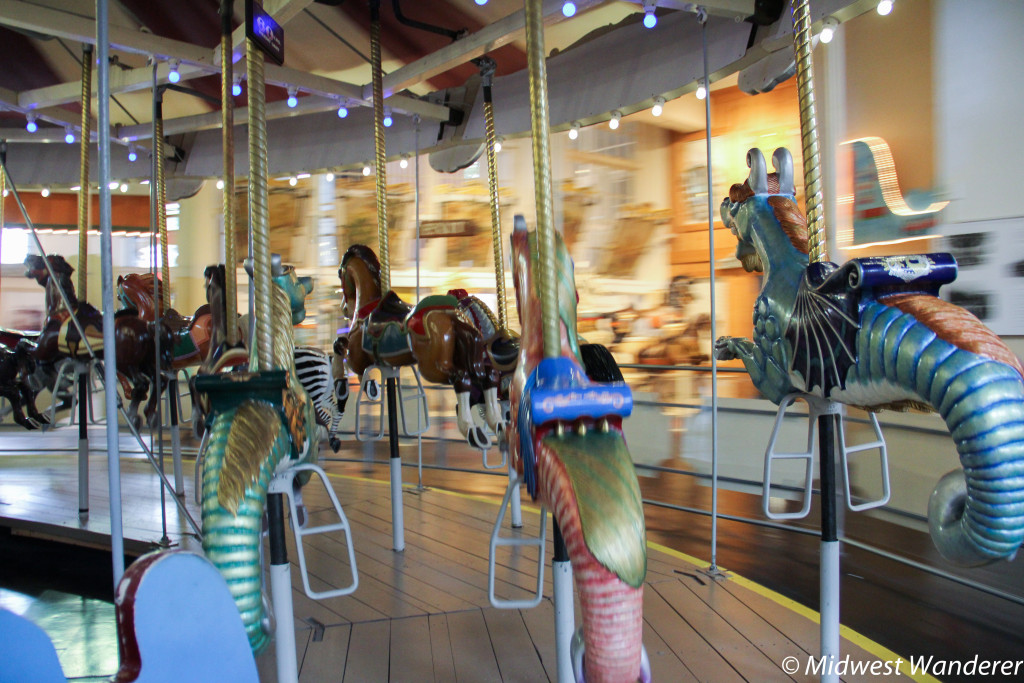 The Merry-Go-Round Museum in Sandusky, Ohio, takes you back to an age before mass production of carousels, to a time over a century ago, when carousel animals were painstakingly hand carved by talented craftsmen. Many of those original animals are on display in the museum, as are newly carved animals, some of which ride the museum’s restored carousel.

The idea of the Merry-Go-Round Museum stemmed from a series of 1988 carousel postage stamps, one of which featured the King Armored horse carved by Daniel Muller in the 1920s, which was on the Cedar Point Kiddieland carousel in Sandusky. Today a replica horse is on display in the museum, and you’ll still find the original at a museum located in Cedar Point, the nation’s second-oldest amusement park, which dates back to 1870. 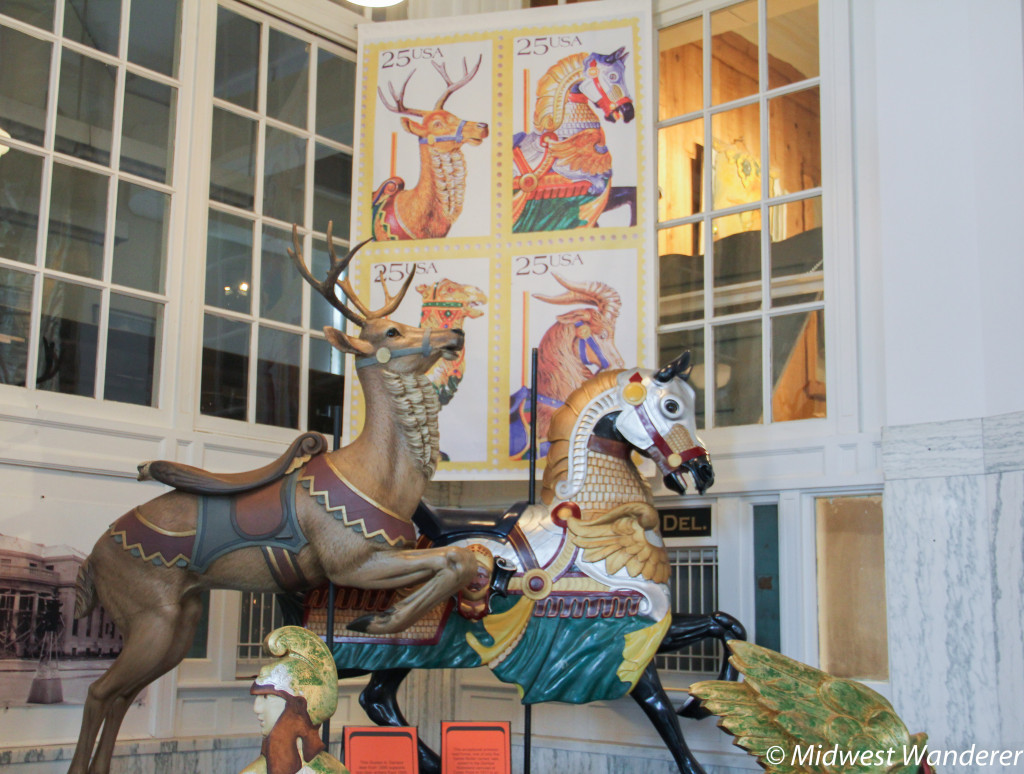 All three styles of carousel horses are represented in the museum. County Fair horses are smaller than most, whereas Philadelphia horses are large. Coney Island horses are colorful with lots of bling. The side of the horse that faced the outside was known as the “romance side,” with more jewels than you would find on the side facing the inside of the merry-go-round. The horses that moved were called “jumpers,” and the stationary horses were referred to as “standers.” 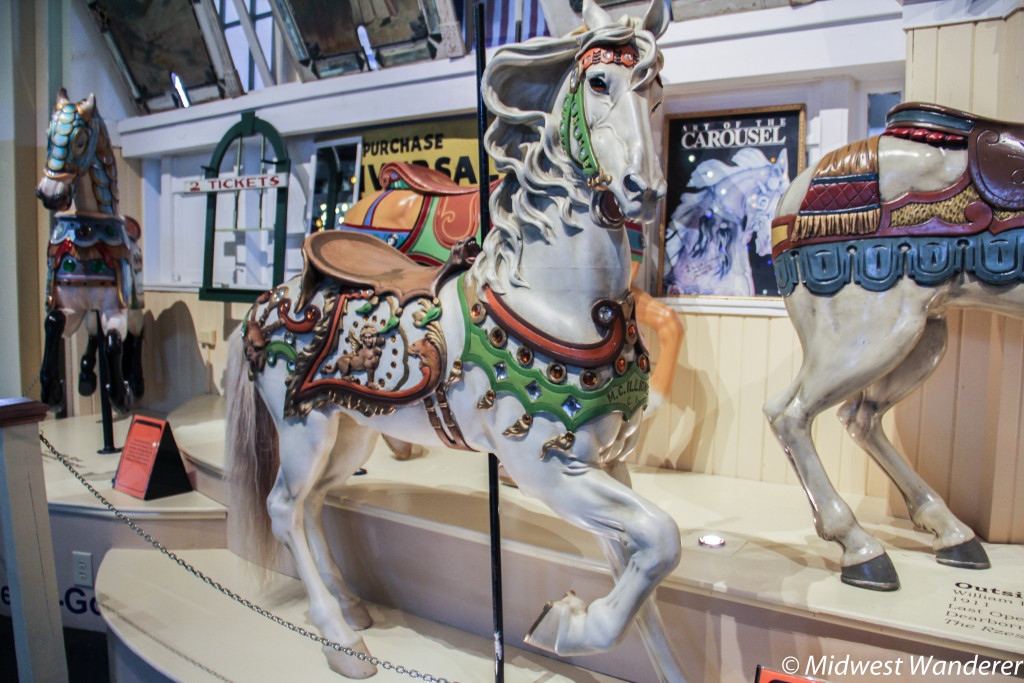 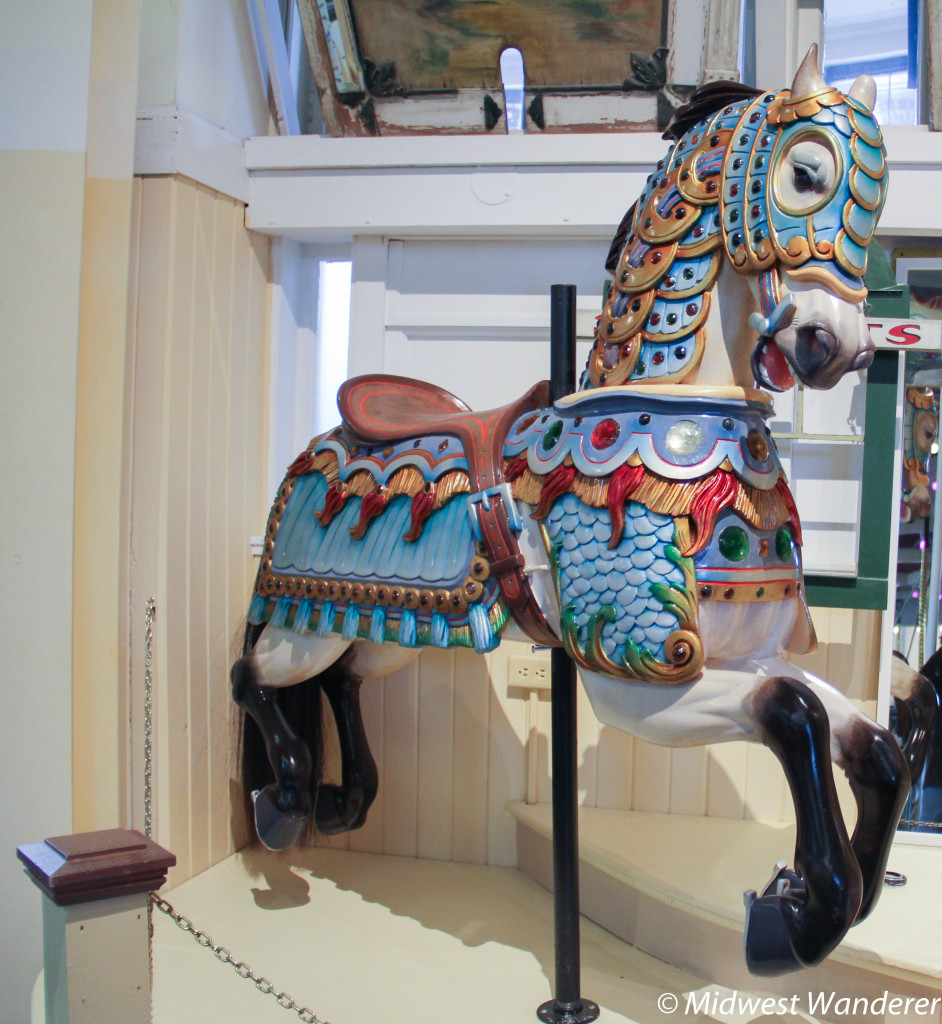 Refurbished carousel animals from early merry-go-rounds are on exhibit in the museum, everything from chickens and dogs to giraffes and zebras. 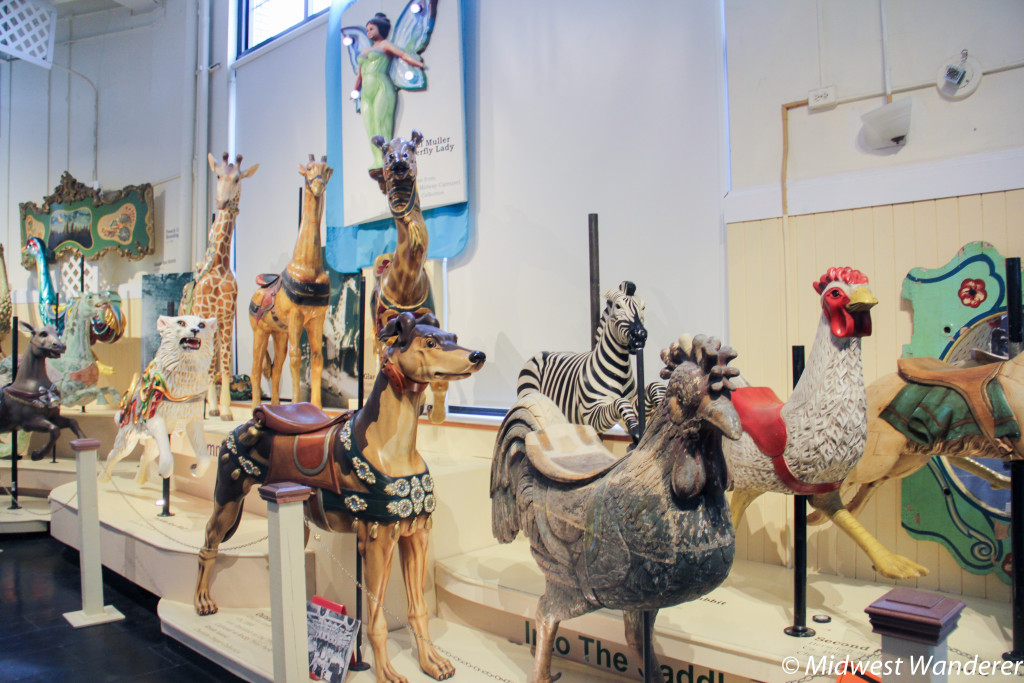 The highlight of the museum tour is riding the working refurbished carousel. 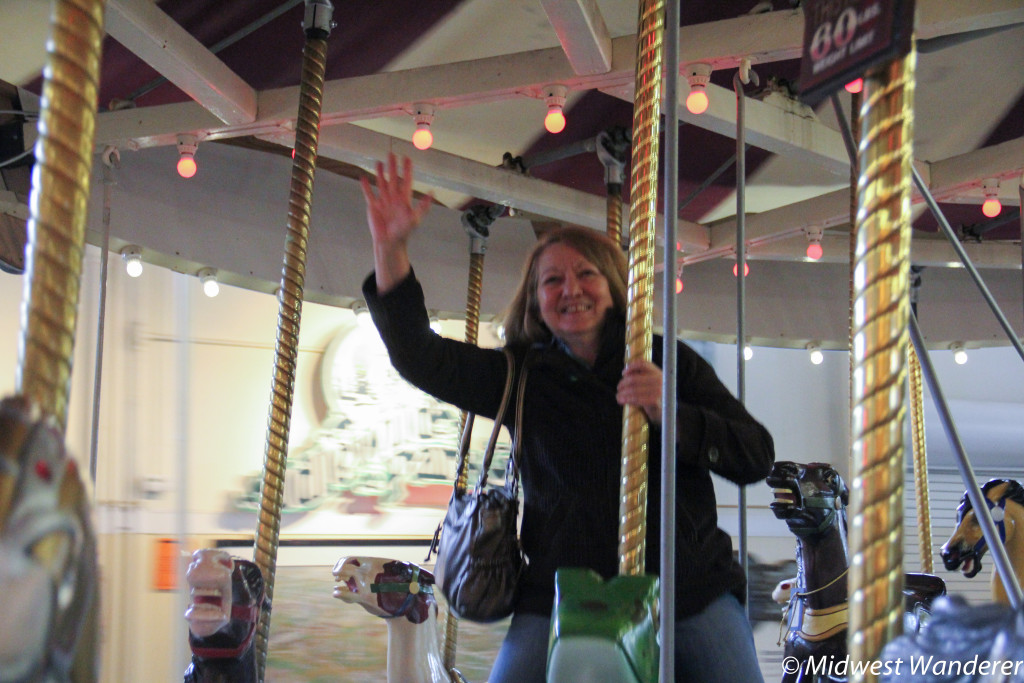 The carousel was a mess and void of animals when it was purchased in 1991, now refurbished and populated with animals from the museum’s collection, on loan from private collectors and eight animals carved at the museum, including an ostrich and sea monsters. 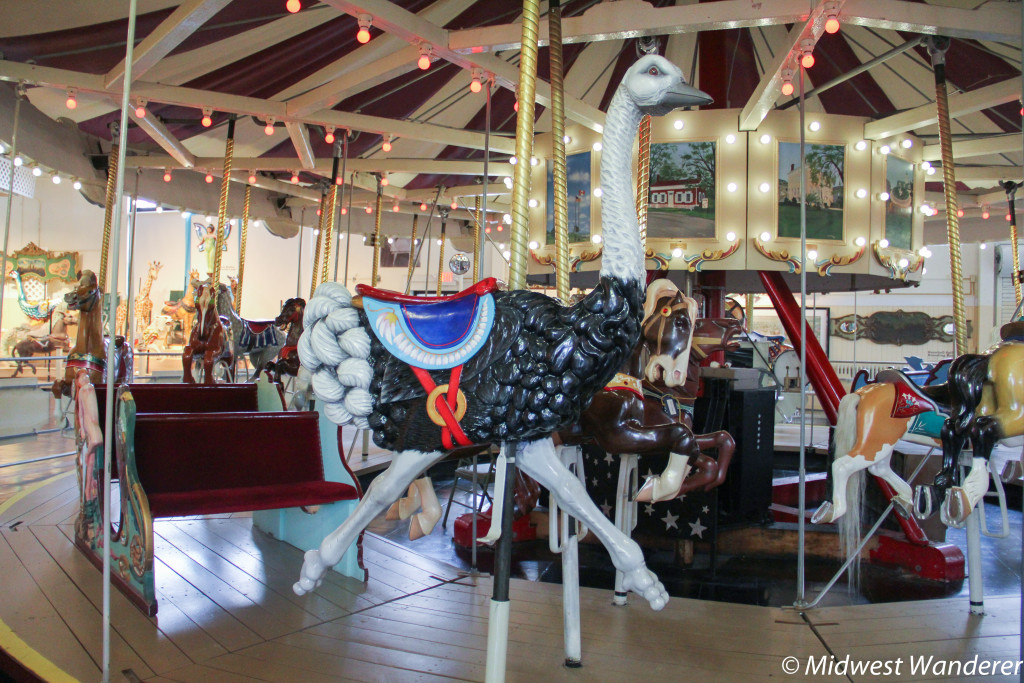 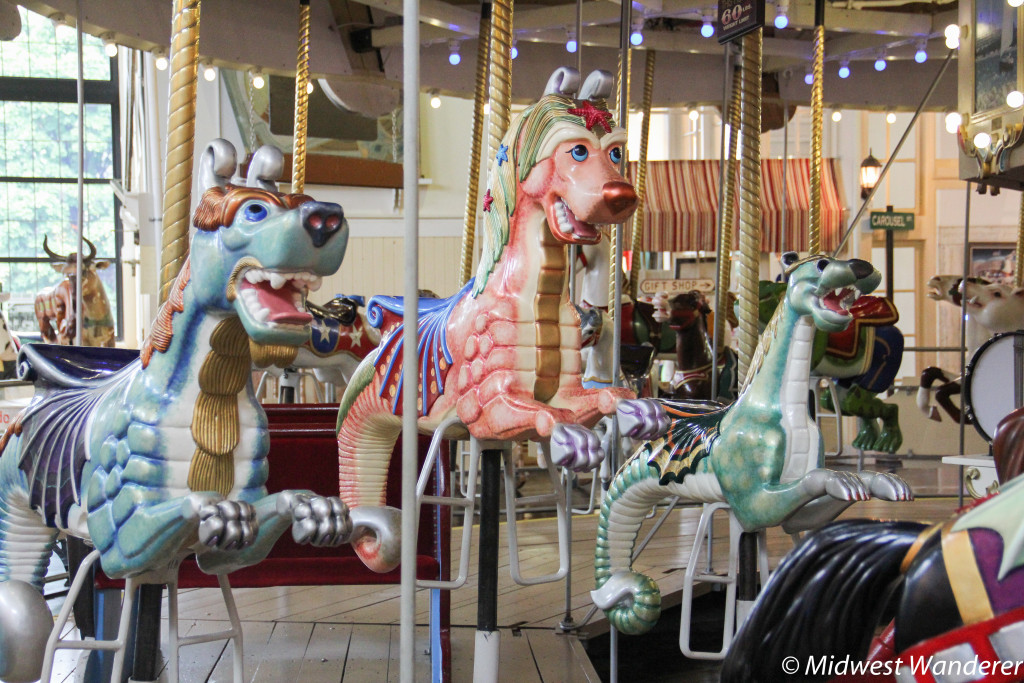 You can often watch carvers ply their trade in the museum’s workshop. We missed the carver on our visit. However, we saw the pieces being worked on at the time, a dog and the beginning of a horse to be given away in a raffle, as is done every year. Up to 72 pieces of wood are used in creating a carousel animal. 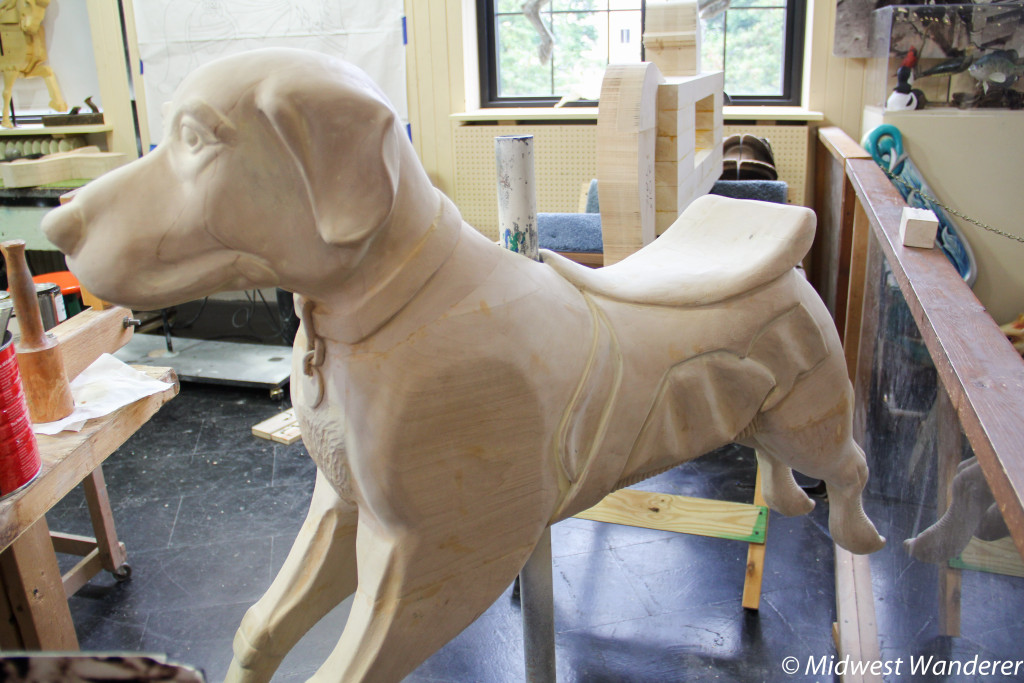 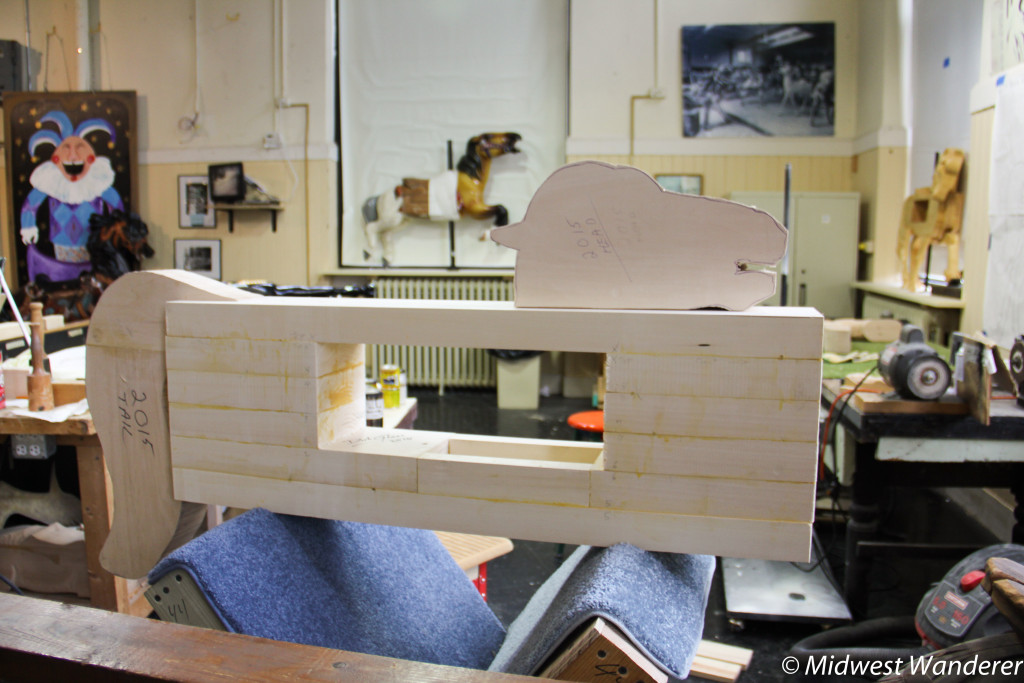 A donkey, created by renowned carver Gustav Bayol circa 1900, and owned by a private collector, was restored by the museum’s carving and restoring team. Barely holding together when they got it, the restorers replaced one leg and repaired the other three. New ears and lots detail had to be recarved because of previous poor repair. 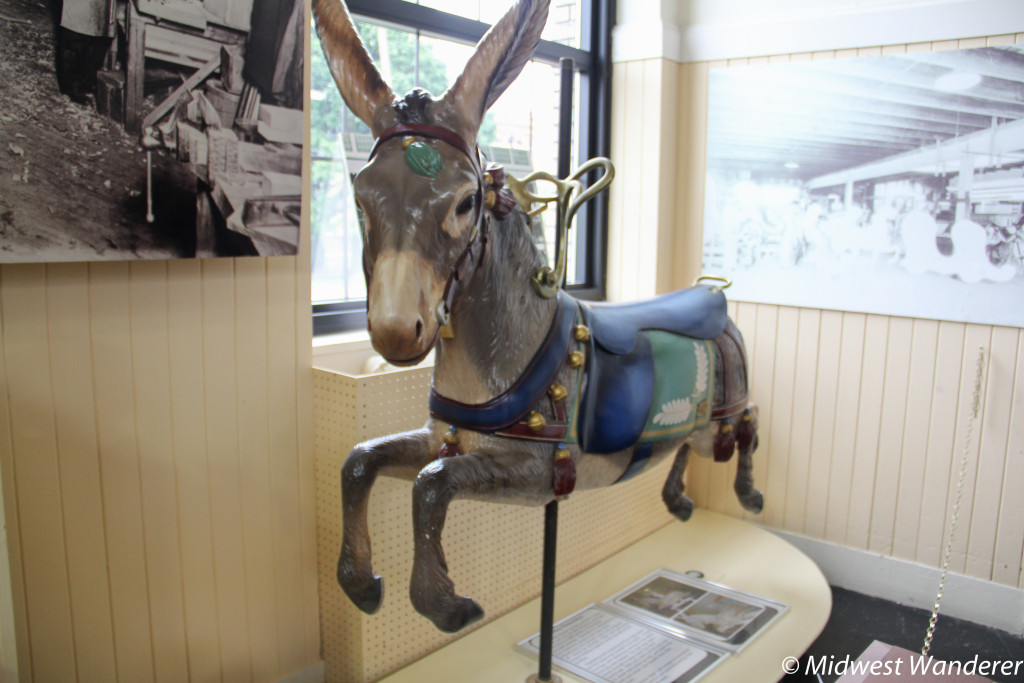 During the carousel’s “golden age,” from the 1860s to the time of the Great Depression, over 4,000 carousels were built. Today fewer than 200 exist. Organizations like Sandusky’s Merry-Go-Round Museum are seeing to it that what still exists stays in existence and at the same times give the public the opportunity to experience the romance of early carousels.

The Merry-Go-Round Museum, located at 301 Jackson Street in Sandusky, Ohio, is open February through December. Admission ($6 for adults; $5 for children age 4-14; children under 4 free) includes one ride token. Check the web site for exact hours, as they vary by season.

Before this summer, I knew little about Wild Bill Hickok. Then, within just a few weeks, we visited three places within Kansas and Illinois that all shared Hickok stories—quite a coincidence. I learned several fascinating facts about him. Here are END_OF_DOCUMENT_TOKEN_TO_BE_REPLACED