The diner is tiny and cramped, the staff is sassy, and they serve Garbage.  But during peak times, the line of people waiting to eat at Frank’s Diner extends out the door of this downtown Kenosha eatery.  What makes it so attractive?  The ambiance of the historic diner car, the sassiness of the staff and the popular delicious and plentiful breakfast specialty they call Franks Garbage Plate. 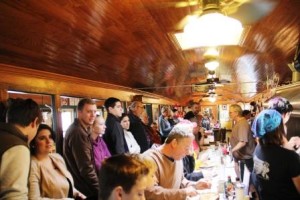 It isn’t surprising that Frank’s Diner was featured on the Food Network’s Diners, Drive-ins and Dives show, as popular and unique as it is.  The oldest continuously operating lunch car diner in the United States, opened in 1926, Frank’s Diner is a Kenosha icon with registered historical landmark status. 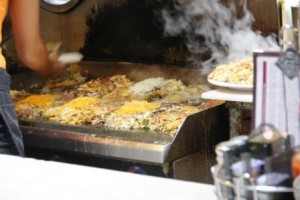 If you’re there for breakfast on a busy weekend, you’ll have to wait in line, but that in itself is entertainment.  Form a single file line along the wall dividing the counter seating from the booths.  From here you can watch all the action, see the fast-moving staff prepare Garbage Plates on the grill, hear their sassy comments and read signs posted on the wall, like “Shut up and eat.”  Their rules are “Be nice or leave” and “Order what you want—eat what you get.”  It took about a half hour to make our way from the door to the front of the line, but the time seemed to go quickly with everything going on around us. 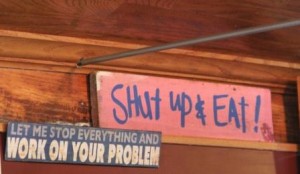 While we were there, they played a round of tequila roulette.  Anyone over 21 could take a cup of apple juice from a tray.  But watch out – one cup contained tequila instead of apple juice. 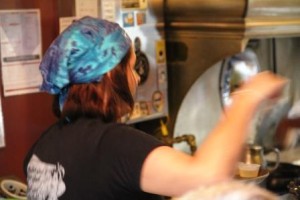 Frank’s Diner serves huge pancakes and eggs Benedict with fresh-made Hollandaise sauce, but the star of the show is the signature Frank’s Garbage Plate.  It starts with a huge portion of hash browns on the grill with onion, green peppers and jalapenos, if you’d like.  Five eggs are broken over the hash browns (only three if you order a half plate).  Add up to five meats, five cheeses and five vegetables.  It’s all mixed together on the grill, fried up crisp and served with fresh homemade bread.  I ordered half a plate with only bacon and cheddar, and there was so much food, I could only eat half.

As for the sassiness of the staff, yes, they throw out some silly smart-aleck remarks, but when they’re serving you, they’re as polite and customer-focused as could be.  Don’t let the secret out, though.  You may ruin their reputation.

Enjoy this post?  Click the Subscribe2 button to the left to be notified whenever I publish another post on MidwestWanderer.com.  (Be sure to click the link when you get the e-mail asking you to confirm.)  Visit the Midwest Wanderer Facebook Page, and check out my Examiner.com page, too, where I’ve had over 75 articles published.

Visit Kenosha for a shopping getaway

Have you been to Chicago’s Field Museum Lately?

Before this summer, I knew little about Wild Bill Hickok. Then, within just a few weeks, we visited three places within Kansas and Illinois that all shared Hickok stories—quite a coincidence. I learned several fascinating facts about him. Here are END_OF_DOCUMENT_TOKEN_TO_BE_REPLACED