“Watch the person in front of you.” “Put your paddle all the way in the water, straight down.” “Lean forward and use your entire body.” These were some of the instructions our Lighthouse Lizards dragon boat team received just before racing–and as panic started to set in.

Participating in the Kenosha Area Dragon Boat Festival on Lake Andrea wasn’t initially on the itinerary when planning our July trip, but when Meridith Jumisko, Public Relations Manager for the Kenosha Area Convention & Visitors Bureau, asked if my husband Skip and I wanted to be on the CVB team, we were up for the challenge.

Our only experience with dragon boat racing was watching them in Denver a few years ago where all of the paddlers looked professional. However, Meridith assured me the CVB team does it just for fun. Last year they came in last place, so they couldn’t possibly finish any lower.

Because the races were starting early and we had a two hour drive to Kenosha, Skip and I planned to participate in the second and third heats, so we missed the pre-race practice. Not to worry, we were told, you’ll get some instruction before the race that you’re in. So donning our lime green team t-shirts and headbands, we were ready to row. 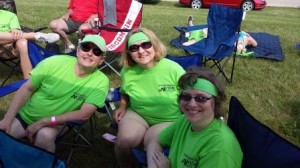 In each heat, three or four boats race at a time, and then finishing times of all boats are compared. The Lighthouse Lizards had come in second of three boats in the race that we missed, and eleventh of thirteen teams in time. Not dead last. So far, ahead of last year.

We found out that most of the other teams are club members who practice weekly. While they were doing calisthenics or practicing their stroke between races, we saved our energy. We chatted instead and munched on snacks and yummy sandwiches provided by Linnea Bakery. Resting and energizing were critical. 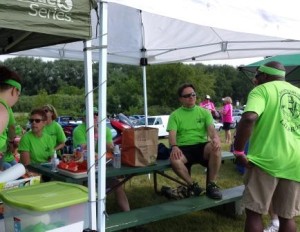 Called now to race in the second heat, we put on life jackets and grabbed paddles. We received general rowing instructions and were assigned our positions in rows 6 and 7. The lead paddlers in the front set the pace, the drummer beats the drum with the pace, and the other 18 paddlers coordinate and paddle at the same time. The sweep stands in the back and steers. The pace quickens as you go until you reach race speed. At least, that’s how it’s supposed to be done. 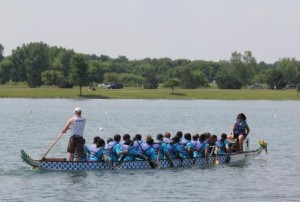 We heard “Go!” and we were off, neck to neck with the other two boats. For about five seconds. We paddled hard but apparently not in synch by the “ouches” and other exletives I heard as hands were hit by paddles in front of them, or by the banging I felt in my back from another’s paddle. We came in last. Oh, well, one more heat to go; one more chance to save face.

The last heat was the consolation round. Skip volunteered to be the drummer and I got relegated to the last row where I couldn’t smash anyone’s hand. This time we were in synch during the practice. “Row like this, and you’ll win the race,” our sweep told us. We were better this time, I thought, but again the other boats pulled away. We ended up in thirteenth place out of thirteen teams. Dead last, and I helped get us there. I like to think of it as helping to maintain the status quo.

2014 was the third year of the Kenosha Area Dragon Boat Festival held at Lake Andrea in Pleasant Prairie, Wisconsin. Check the web site in 2015 for details of next year’s festival. The public is invited to watch the races or to put together a corporate or club/community team and participate.

Before this summer, I knew little about Wild Bill Hickok. Then, within just a few weeks, we visited three places within Kansas and Illinois that all shared Hickok stories—quite a coincidence. I learned several fascinating facts about him. Here are END_OF_DOCUMENT_TOKEN_TO_BE_REPLACED