Clean horizontal lines, extensive use of art glass, entry doors recessed into the building front. I knew I had reached my destination without even seeing the name of the Historic Park Inn on the hotel. It was obviously Frank Lloyd Wright’s Prairie School architecture, the last remaining hotel designed by the renowned architect. The Historic Park Inn was my home for my three night stay in Mason City, Iowa. 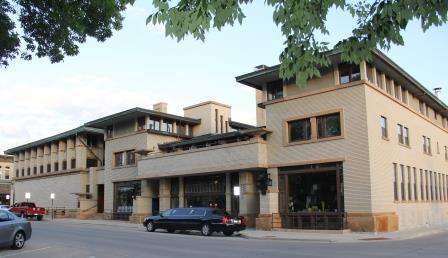 In the early 1900s James Blythe and J.E.E. Markley, attorneys in Mason City and board members of the local bank, wanted a single building to house the bank, their law firm and a hotel in an effort to perk up and promote the city. Markley’s daughters were attending the Hillside Home School, run by his aunt, in Spring Green, Wisconsin. Intrigued with the Prairie School design of the school, Markley contacted its architect, Frank Lloyd Wright, who agreed to design a building for Mason City. The hotel was to face a lovely city park.

Within ten years after the hotel and bank opened, the economy plummeted, the City National Bank failed, and the law firm moved its offices. Those portions of the building were converted to retail and office space with several structural changes.

Over the next several decades the hotel portion of the building was converted to apartments. However, repairs were difficult to keep up with, and the building fell into disrepair. Walls were beginning to cave in. Pigeons made the building their home.

In 2005 a local group formed Wright on the Park and began fundraising efforts. Despite protests from naysayers who thought the effort futile, they raised $18 million through grants and donations to restore the hotel, which they purchased from the city for one dollar. The plan was to restore the hotel to as close to the original design as possible while incorporating modern day necessities and comforts. In 2011, 101 years after the hotel originally opened, the renovated Historic Park Inn reopened to the public.

Hotel restorers bored 64 holes into the walls throughout the building to determine the original colors. they then replicated the colors.

They rebuilt the mezzanine, which had been removed, using Wright’s plan. Originally, orchestras played in the mezzanine during events. Today, a few chairs and a baby grand piano make the mezzanine a space for guests to relax.

The room behind the lobby was once a dining area with a 25-panel art glass skylight. Long ago removed from the hotel, the skylight was discovered in the home of Dr. Robert McCoy and his wife Bonnie. the McCoys donated the skylight back to the hotel. Today’s Skylight Room serves as a sitting room for guests. 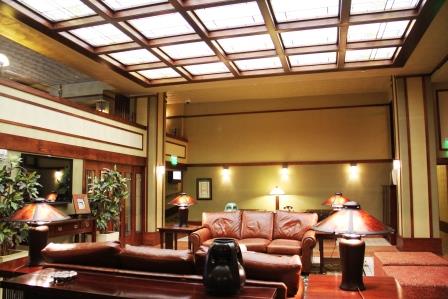 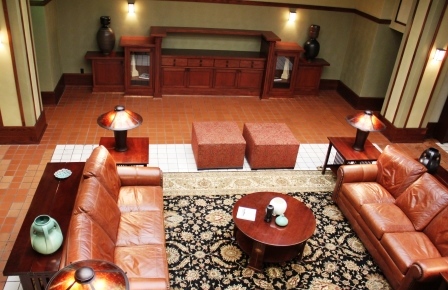 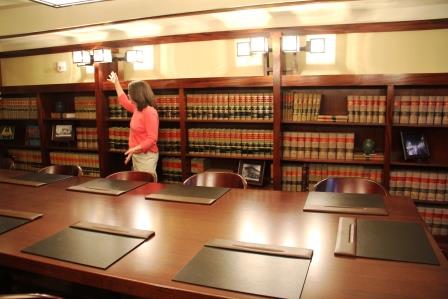 The bank portion of the building, now a conference center, originally had no windows on the first level for security purposes. When the building transitioned to retail space, windows were added. During restoration, the windows were removed. Original art glass panels, found above the ceiling, are now prominent features of the room. 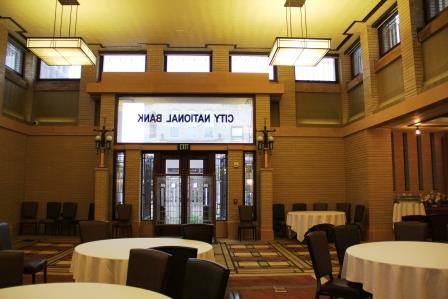 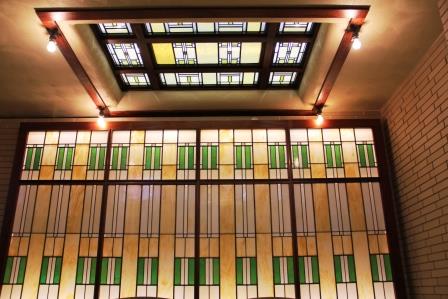 There were originally 43 guest rooms in the hotel, with shared bathrooms. Today the hotel has 21 rooms in the original hotel portion of the building and another six over the bank portion. All of the original doors were left intact, doors with vertical slits designed for air flow before air conditioning existed. Door knobs were removed from the doors that are no longer entries into the rooms, and for privacy, full-length mirrors were installed on the backs of the doors that are still used.

Every guest room is different. Windows line the entire length of one wall in the room I was in. The original art glass is no longer there, but Andersen Windows donated inserts to mimic art glass. 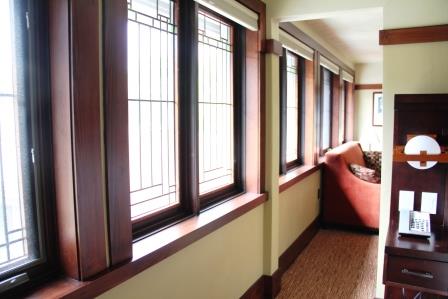 My room had an obvious distinction of two rooms made into one. The first room is now a sitting room, with a sofa, chair, desk and flat-screen television. An open doorway leads to the bedroom and bathroom, which had been a second guest room in the past. 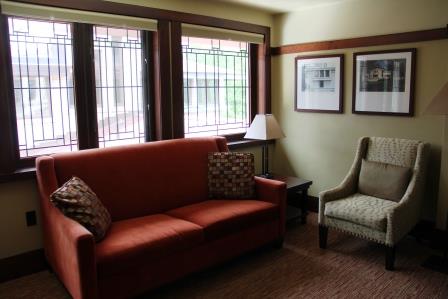 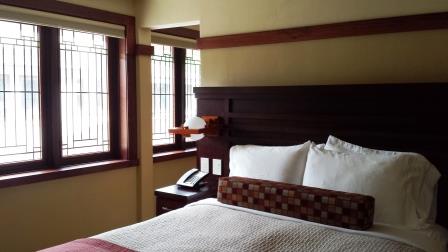 The Prairie School design extends into the 1910 Grills, an upscale restaurant that ranks as the number one Mason City restaurant on Trip Advisor, located off the lobby of the Historic Park Inn. Even the napkin fold is reminiscent of Wright’s style. 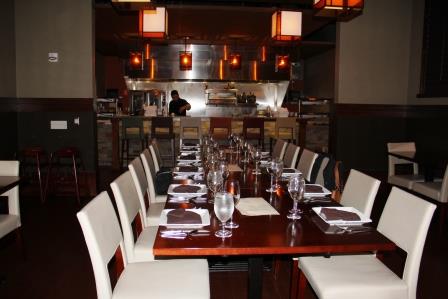 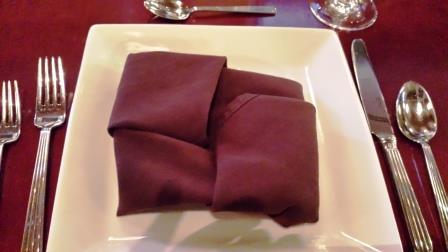 The 1910 Lounge is on the lower level in what used to be the Gentlemen’s Lounge. You can play pool on a 1910-era pool table, relax at the bar or choose a seat on a sofa or comfortable chair while enjoying your beverage of choice. 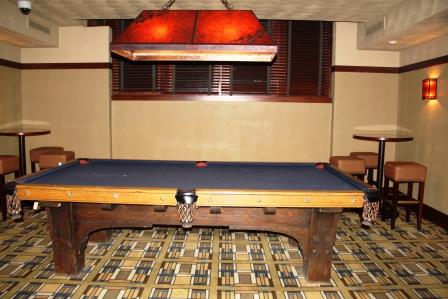 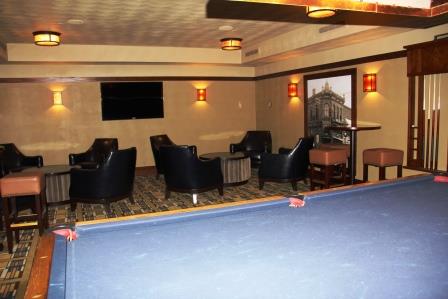 The Historic Park Inn is once again what Frank Lloyd Wright envisioned. Some things in the renovation could not be perfected. A couple of pieces of the art glass in the Skylight Room are cracked because the color isn’t available. Some of the floors were impossible to even out, like the floor in my room that sloped downward on the side of the bed, but it only adds character to this century old building.

Restoration of the Historic Park Inn has brought Frank Lloyd Wright fans from all over the world to Mason City. Many of the naysayers who originally protested the hotel’s renovation have changed their attitude. The hotel, albeit a century later than planned, has perked up and promoted the city. Frank Lloyd Wright fans come from all over the world to stay at the hotel, which still faces the beautiful city park, where a new statue looks back at the hotel, a statue representative of the hotel’s world renowned and respected architect. 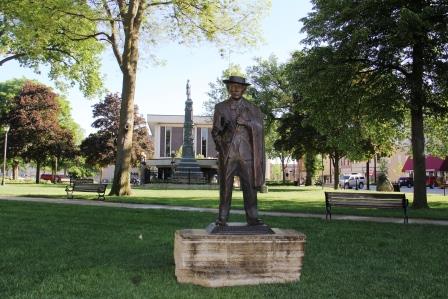 If you stay at Historic Park Inn 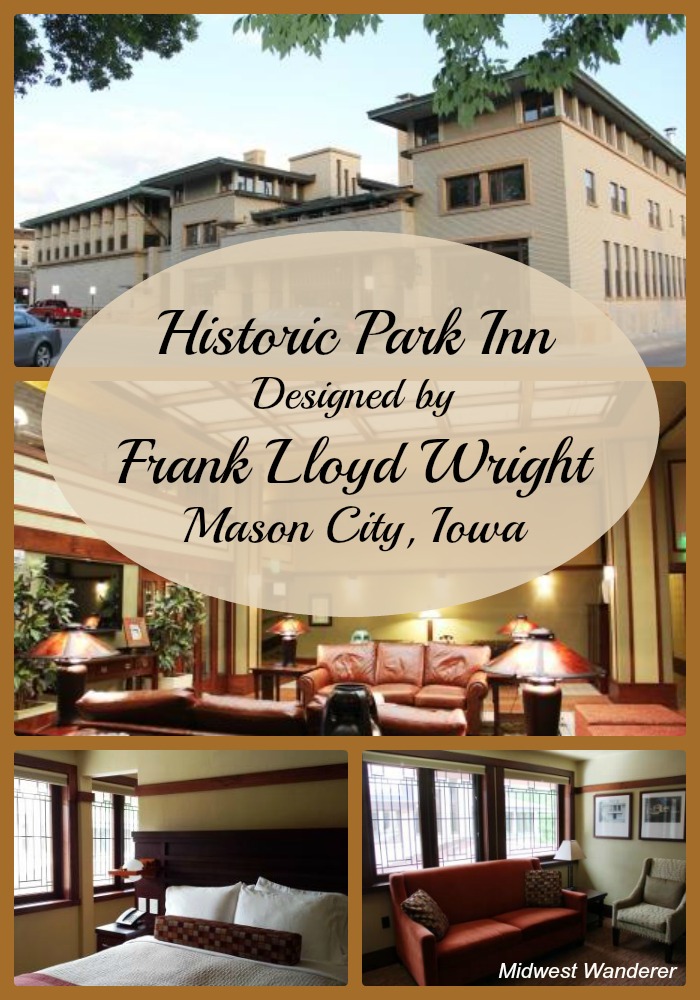 Disclosures:  My stay at the Historic Park Inn was hosted by the Iowa Tourism Office and the Historic Park Inn, but any opinions expressed in this post are strictly mine.
This article contains an affiliate link. If you book a room through the “Check Rates and Reviews” link above, I will receive a small commission, at no cost to you.

Before this summer, I knew little about Wild Bill Hickok. Then, within just a few weeks, we visited three places within Kansas and Illinois that all shared Hickok stories—quite a coincidence. I learned several fascinating facts about him. Here are END_OF_DOCUMENT_TOKEN_TO_BE_REPLACED