The Kokomo Automotive Museum started as a dream of the local Pioneer Auto Club. To fund their dream museum, the club initiated the annual Haynes-Apperson Festival, now held over the July 4th weekend. They held the first festival in the late 1970s. Twenty-two years later, their dream museum became reality. Today the Kokomo Automotive Museum houses about a hundred cars, many of which were built in Indiana. The museum highlights Haynes and Apperson automobiles, both made in Kokomo. In fact, the museum is home to the world’s largest collection of Haynes and Apperson automobiles under one roof.

Before we visited Kokomo, Indiana, last year, I had no idea the area was so big in early automotive innovation. I had never heard of Elwood Haynes, the man who designed the first practical, purpose-built automobile in the United States in Kokomo. Nor did I know that the pneumatic rubber tire, the carburetor, and the first car radio were all developed in Kokomo.

On our visit to the Kokomo Automotive Museum, we chatted with Jeffrey Shively, Director of Museum Development. Jeffrey filled us in on the area’s automotive history. Here are a few of the highlights:

Stories behind the cars

Jeffrey also related some fascinating stories about the cars they have on display, his passion for the history of cars and their owners clearly showing.

Jeffrey had several stories like that. Adding the human touch to the cars’ histories makes the cars in the museum even more interesting.

After chatting with Jeffrey, we wandered through the museum, oohing and aahing at the early cars. I find it amazing that so many old cars, fascinating artifacts of automotive history, still exist. Even though I’m not a huge car buff, I do enjoy looking at them. I’m grateful that there are people interested enough to collect and restore these cars and keep automotive history alive.

Here is a sampling of some of the cars on display at the Kokomo Automotive Museum:

If you visit the Kokomo Automotive Museum

The Kokomo Automotive Museum, located at 1500 N Reed Road in Kokomo, Indiana, is open Tuesday through Saturday from 10 a.m. to 4 p.m. and Sunday from 11 a.m. to 4 p.m. (Closed Mondays) Check the website for further details.

We stayed at Courtyard Kokomo during our stay in Kokomo. (Check rates here.) 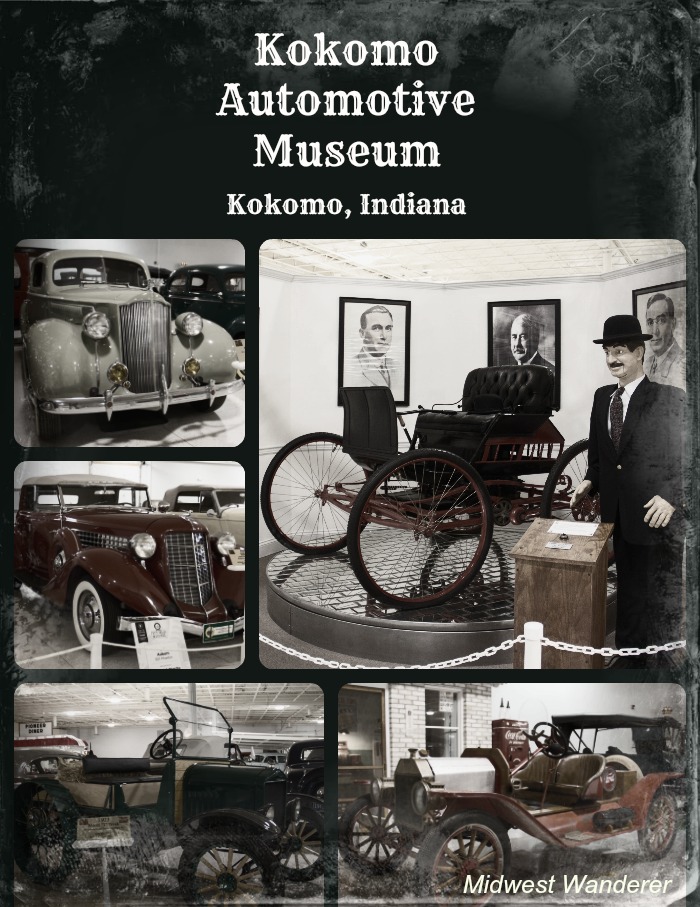 Disclosures: Greater Kokomo Visitors Bureau and the Kokomo Automotive Museum hosted our visit to the museum. Our admission was complimentary. However, any opinions expressed int his article are my own.
This article contains an affiliate link. If you book a hotel room through this link, I will receive a small commission at no additional cost to you.

Howard Steamboat Museum in Jeffersonville, Indiana, pays tribute to the Howard family and their steamboat building company. The tour combines a history of the ornate Edmonds and Laura Howard mansion and the shipyard located across the street, which the Howard END_OF_DOCUMENT_TOKEN_TO_BE_REPLACED