Indiana’s fourth grade students study the state’s history, as we found out first-hand when we visited the Levi and Catharine Coffin State Historic Site in Fountain City. Over a hundred students were visiting on a field trip that day. Apparently that’s common during spring field trip season. I can understand why, since Levi and Catherine Coffin were instrumental in helping over 2,000 runaway slaves, or freedom seekers as they were called, escape to Canada over a twenty-year period. Between student groups, site director Joanna Hahn gave us a tour as she told the fascinating story of this couple whose lives were devoted to helping freedom seekers along the path to a free life. 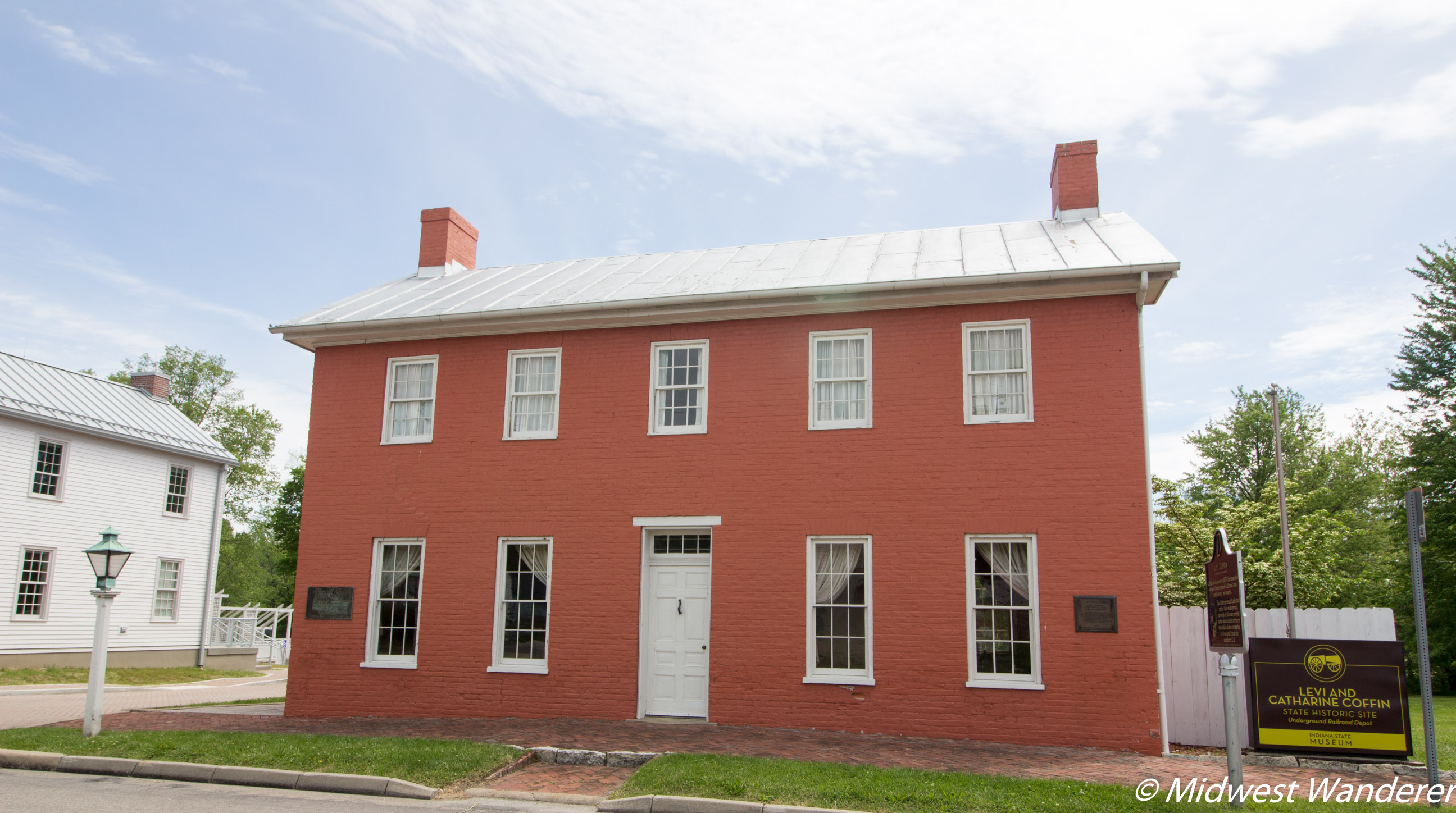 Levi and Catharine Coffin were Quakers, originally from North Carolina. Their opposition to slavery put them in conflict with others in the state, so like many other North Carolina Quakers, they moved north to Indiana, where slavery was illegal. In 1826, the Coffins settled in Newport, which is now Fountain City.

Newport was a busy cog on the Underground Railroad, since three routes merged here. Freedom seekers that crossed the Ohio River at Cincinnati, Ohio; Madison, Indiana; and Jeffersonville, Indiana, all came through Newport.

Shortly after moving to Newport, the Coffins began aiding freedom seekers. It helped that Levi Coffin owned a dry goods store, since they could purchase supplies without suspicion. Coffin also owned a mill, was involved in meatpacking, and was a director of a bank in nearby Richmond, which meant he signed off on mortgages. He was held in high esteem in the community, which is why he was never outed by any of the neighbors as assisting runaway slaves. Although slavery was illegal in Indiana, helping runaway slaves was also illegal. Many in the community knew what he was doing, but no one would turn him in. First of all, he was a genuinely good person. Secondly, who would turn in the person who might be approving their mortgage?

When Levi and Catharine Coffin first moved to Newport, they lived above their dry goods store. They eventually had a house built, which Levi designed. They moved into the house in 1839, and they lived there until they moved to Cincinnati in 1847.

Touring the house, it’s obvious it was built to harbor freedom seekers. One room has five exits, which means that if someone came knocking at the door, freedom seekers could escape the room in five directions. A 15-foot long upstairs closet has a small door that could be hidden behind a piece of furniture. And then there’s the basement kitchen, which was uncommon in those days. A brick basement floor was even more uncommon.

There is also a well in the basement. Levi built the house over a spring, so there was always flowing water. It seems the Coffins thought of everything. With the indoor well, no one could suspect them of harboring freedom seekers based on their bringing an inordinate amount of water into the house from outside.

While Levi was doing his part in maintaining a high profile in the community and transporting freedom seekers to the next Underground Railroad station, Catharine took care of the freedom seekers at home. She cooked, provided clothing, and gave them a good place of respite. Unless bounty hunters were in the area, it was’t necessary to hide the freedom seekers in closets.

The Coffins aided the freedom seekers year-round. Although the weather was more conducive to travel during the summer, the frozen Ohio River in the winter provided a good opportunity to escape. Freedom seekers usually arrived a few at a time, but on one occasion there were seventeen. Imagine harboring seventeen people in your home and not raising suspicions.

William Bush, a freedom seeker, and his great-great granddaughter

William Bush was a fugitive slave from North Carolina. Legend has it that he had himself shipped in a wooden box to Levi Coffin. Unlike most freedom seekers who went on to Canada, William Bush stayed in Newport, despite the fact that he might be caught, and assisted the Coffins in helping other freedom seekers. It helped that Newport had a community of free blacks living there. William Bush became a successful blacksmith.

A pair of wooden shoes, with a hole worn in the bottom, is on display in the historic site’s interpretive center, next door to the home. The shoes were apparently the ones that Bush wore when he escaped North Carolina. 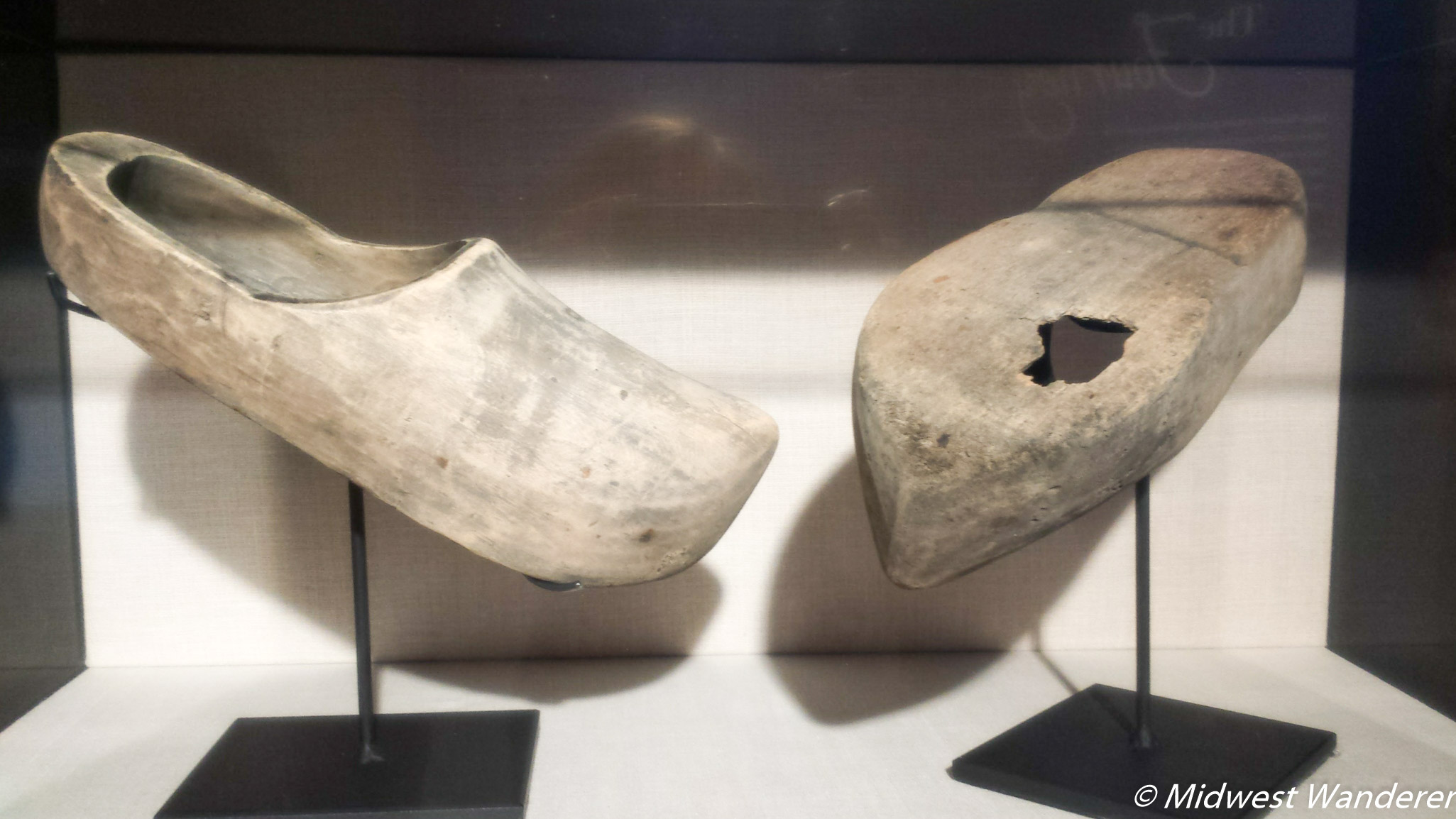 Today Eileen Baker-Wall, William Bush’s great-great granddaughter is a volunteer docent at the Levi and Catharine Coffin State Historic Site. It was a pleasure to meet her during our visit.

The site is open Tuesday through Sunday (closed Mondays). Check the website for hours, holiday schedule, and admission.

We stayed at the Seldom Scene Meadow Bed & Breakfast during our visit to the area. Check rates. 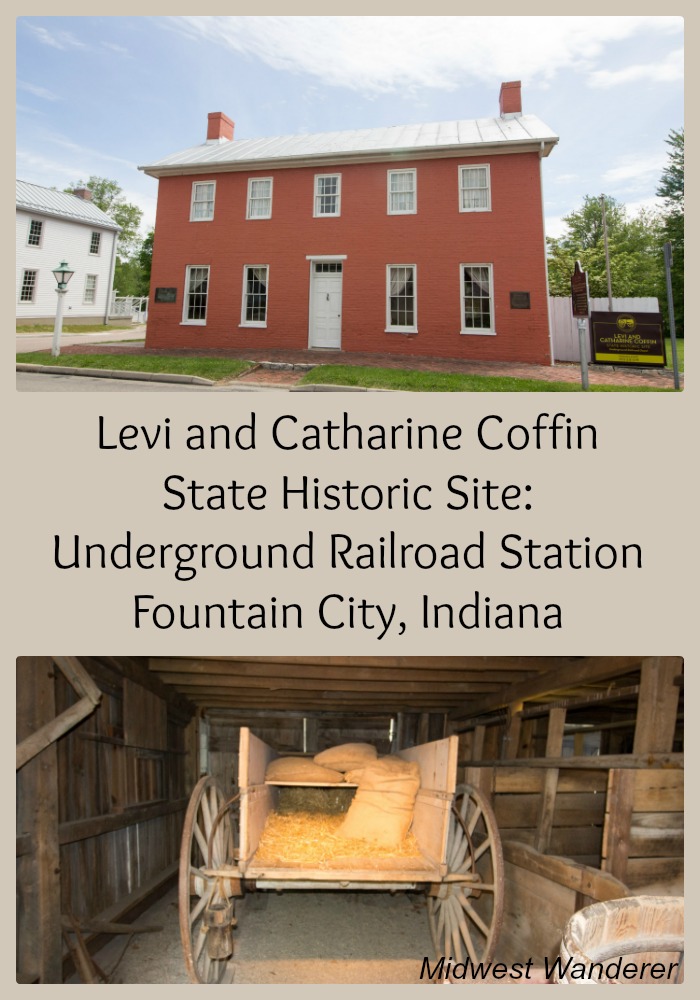 Disclosures: Visit Richmond Indiana hosted our visit to the Levi and Catharine Coffin State Historic Site. However, any opinions expressed in this article are my own.
This article contains an affiliate link. If you book a hotel room through the “Check rates” link above, I will receive a small commission at no additional cost to you.

Before this summer, I knew little about Wild Bill Hickok. Then, within just a few weeks, we visited three places within Kansas and Illinois that all shared Hickok stories—quite a coincidence. I learned several fascinating facts about him. Here are END_OF_DOCUMENT_TOKEN_TO_BE_REPLACED