America’s fascination with Amish culture lures nearly 2 million visitors to Shipshewana, Indiana, each year. Shipshewana is located in LaGrange County, which is the home to over 45,000 Amish. But who exactly are these people who travel by horse and buggy and don’t use electricity, whose women wear long dresses and prayer caps and men wear pants with no outside pockets? What are their roots? Anyone who visits Shipshewana should begin their trip at Menno-Hof. Menno-Hof tells the story of Amish, Mennonites, and Hutterites, three groups who stem from the 16th century Anabaptist movement.

Amish vs. Mennonites vs. Hutterites

You may be familiar with the Amish but unfamiliar with Mennonites and Hutterites. You wouldn’t be able to pick out a Mennonite person on the street, since they wear modern dress. They also use modern conveniences. The Mennonites are the group from which the Amish broke away in the late 1600s.

Hutterites, on the other hand, wear modest, simple, and uniform clothing, similar to the Amish. Hutterites live in communal groups, mostly in Canada. Only 70 of the 462 colonies exist in the United States. Of those, 54 are in South Dakota, the remainder in North Dakota and Minnesota.

Through museum docents, plus video and audio presentations, the Menno-Hof musuem takes you through the Anabaptist history. It starts with early Christianity, when Christians were persecuted. It progresses through later years, when Christianity was the official state religion of the Roman Empire. By the 12th century, the state church portrayed Christ as a merciless judge who would condemn those who failed to pay their taxes.

With the invention of Gutenberg’s movable-type printing in the 15th century, Bibles found their way into the hands of the common man. As people read the Bible, they found that scriptures didn’t support the state church’s doctrine. Early reformers wanted to restore the church to be free and voluntary. They wanted to practice only what is taught in scripture.

People broke away from the state church during the Anabaptist Movement.  “Anabaptist” means “baptized again.” Members of the Anabaptist movement believed that people should be baptized when they are old enough to profess faith. As the movement progressed, Anabaptists were persecuted, thrown into dungeons and sometimes murdered. Some Anabaptists resorted to violence.

In 1536, Menno Simon joined the movement. He helped restore the Anabaptist commitment to peace. Under his leadership, the main wing of Anabaptism became known as Mennonites. Later, in the 17th century, Jacob Ammann, an elder, felt that Mennonites were becoming too worldly. The Mennonites split. Those who sided with Ammann became known as Amish.

As Anabaptists continued to be persecuted in Europe, many migrated to America. In America they would be free to practice their religion. The trip overseas was rough, with cramped quarters, scarce water, disease, and death along the way.

Museum exhibits explain Anabaptists’ newfound freedom and prosperity in America. Yet, they also were the subject of prejudice. Anabaptists migrated farther westward in Pennsylvania. They also migrated to Ontario, Ohio, Indiana, Illinois, Iowa, and Missouri, where hey hoped to find farmland and greater freedom of faith.

The final stop in the museum is a reproduction of a Mennonite church, with plain pews and a pulpit in the center front. Although the Mennonites worship in a church, Amish families take turns hosting worship in their homes.

We highly recommend visiting Menno-Hof as one of the first things you do in Shipshewana for greater insight into the Amish and Mennonite way of life. Menno-Hof is located at 510 S Van Buren Street in Shipshewana, Indiana. The museum is open Monday through Saturday. Closed Sundays. Check the website for hours, which vary by season, and special closing dates).

Accommodations: We stayed at the Blue Gate Garden Inn during our visit to Shipshewana.  Check room rates. 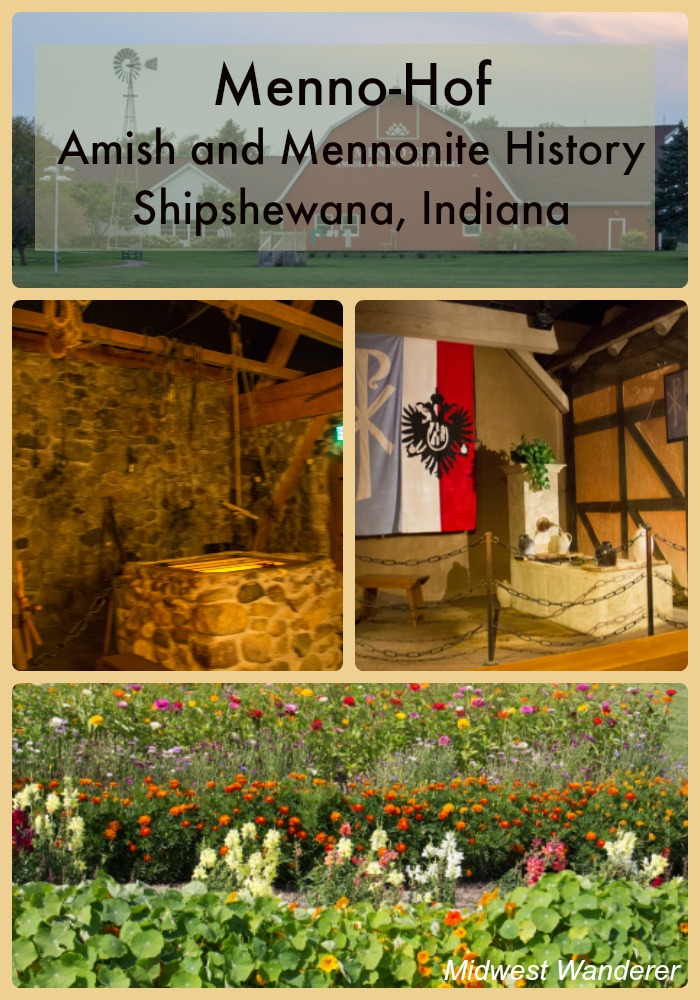 Disclosures: The LaGrange County Convention and Visitors Bureau  and Menno-Hof hosted our visit to Menno-Hof. Our admission was complimentary. However, any opinions expressed in this article are my own.
If you book a room through the “Check room rates” link above, I will receive a small commission, at no additional cost to you.

Before this summer, I knew little about Wild Bill Hickok. Then, within just a few weeks, we visited three places within Kansas and Illinois that all shared Hickok stories—quite a coincidence. I learned several fascinating facts about him. Here are END_OF_DOCUMENT_TOKEN_TO_BE_REPLACED