“Just like communities everywhere, it is the start of a day like any other day.” This is the opening point as you enter the Oklahoma City National Memorial & Museum tour. A timeline goes on to outline what was going on that morning in downtown Oklahoma City: people starting work, children being dropped off at the daycare inside the Alfred P. Murrah Federal Building, an Oklahoma Water Resources Board meeting about to begin in the Journal Record Building directly across the street. A typical Oklahoma City day. No one had an idea of the horror about to occur. 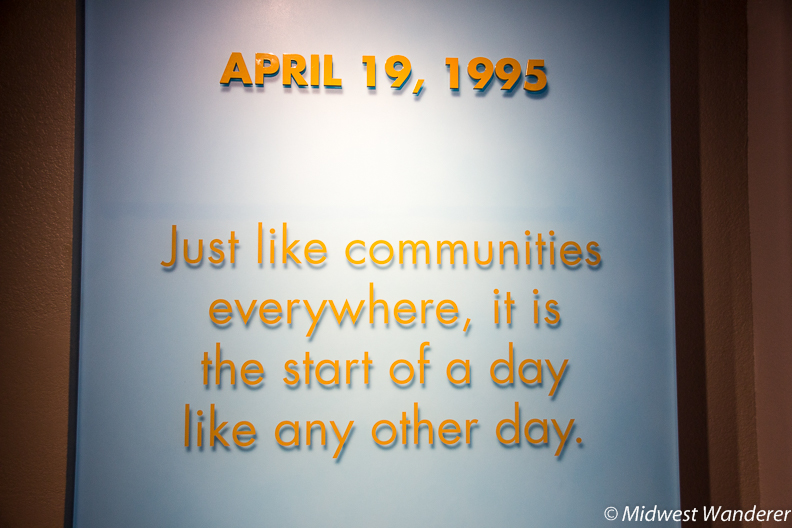 An announcement directs you into the Water Resources board room. The doors automatically close behind you and the actual recording of the board meeting that began precisely at 9 a.m. on April 19, 1995, plays. Two minutes into the meeting, at 9:02, a deafening blast—and ensuing chaos—take you to the reality of the tragedy. The Journal Record Building sustained damage, and there were some injuries. However, the real devastation was across the street in the Murrah building, the bombing target.

Audio clips, videos and personal effects of victims and survivors bring to reality the emotional trauma that followed the bombing of the Murrah building. The domestic terrorism attack claimed 168 lives and injured over 800 others. 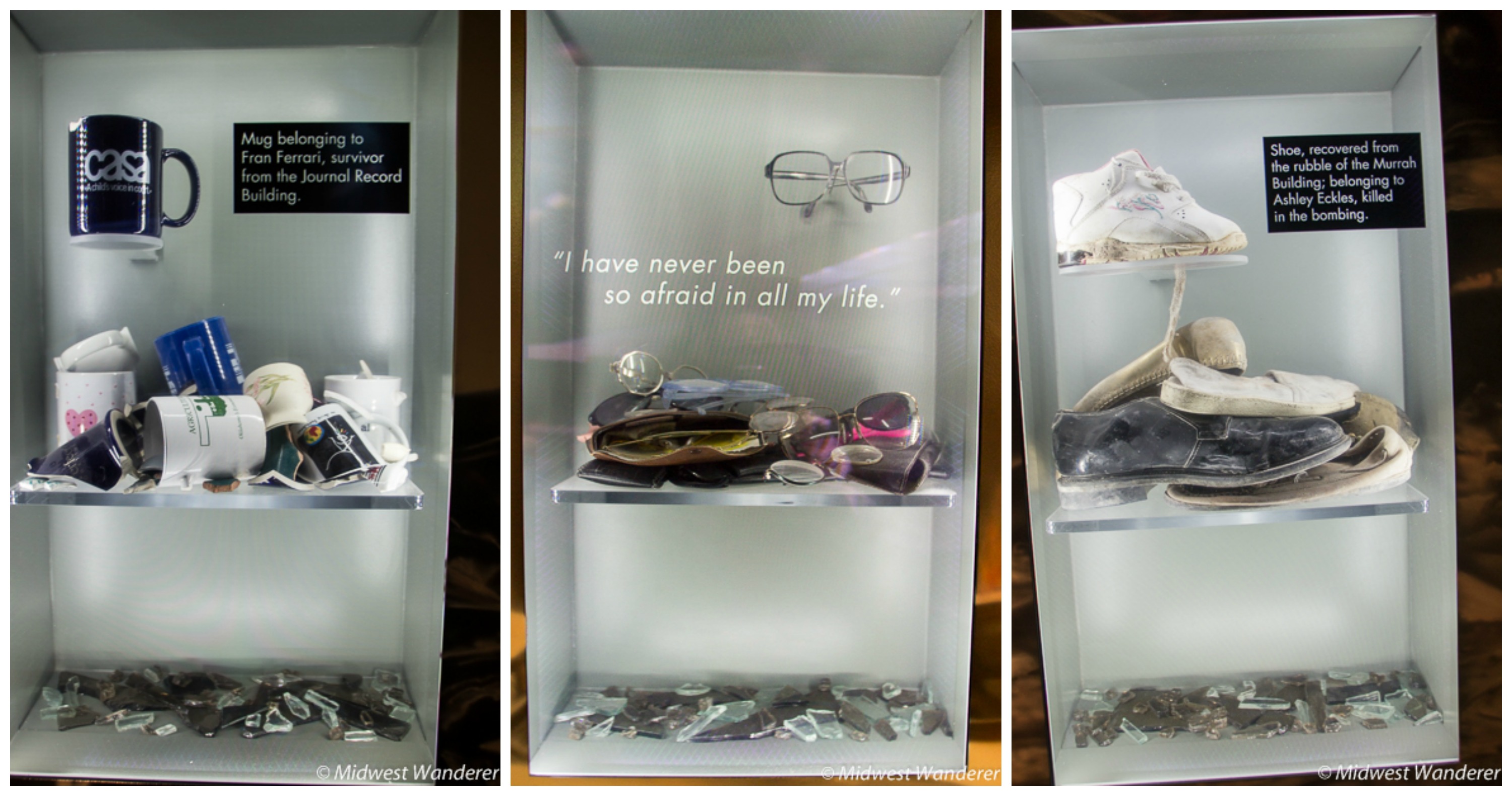 The timeline continues through the museum, first by minutes, then hours, then days. More than anything, the museum is about people. News clips of rescue efforts are combined with videos of survivors telling their stories. Family members of those still missing continue to hold out hope. Those who lost loved ones mourn. 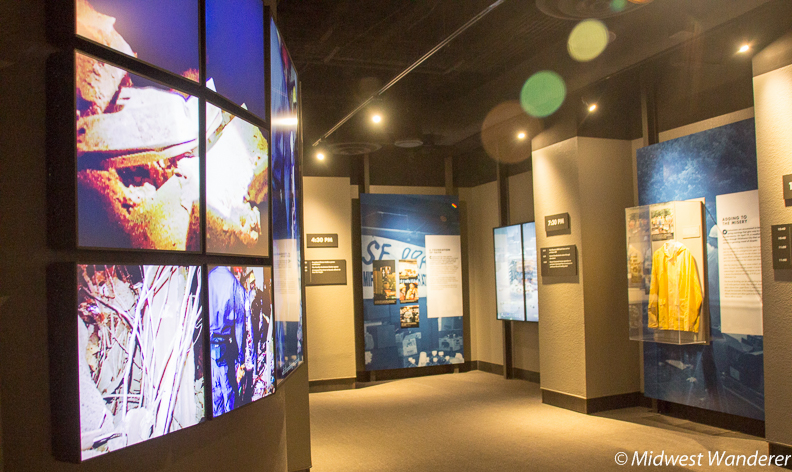 Stories of rescuers and specially-trained canine units who worked countless hours, as well as volunteers who prepared meals for rescuers and victims’ family members, demonstrate the strong community bond that took place following the incident.

Intertwined in the timeline, the investigation story plays out, again in a mixed-media format. You learn how evidence was gathered, how Timothy McVeigh and Terry Nichols conspired to carry out the attack and that others were involved as well. Quite a bit of the evidence is on exhibit, including the license plate from the rental truck filled with explosives that was detonated, as well as McVeigh’s getaway car.

The last part of the museum covers the trials of McVeigh and Nichols. McVeigh was sentenced to death and subsequently executed; Nichols is serving multiple life prison sentences with no chance of parole.

Today, 168 empty chairs, representing each of the victims, are placed where the Murrah building stood. The street that was adjacent to the building has been closed off, and a shallow, flowing reflecting pool put in its place. An American Elm tree, over 90 years old, still stands nearby as a symbol of resilience and has been incorporated into the memorial. 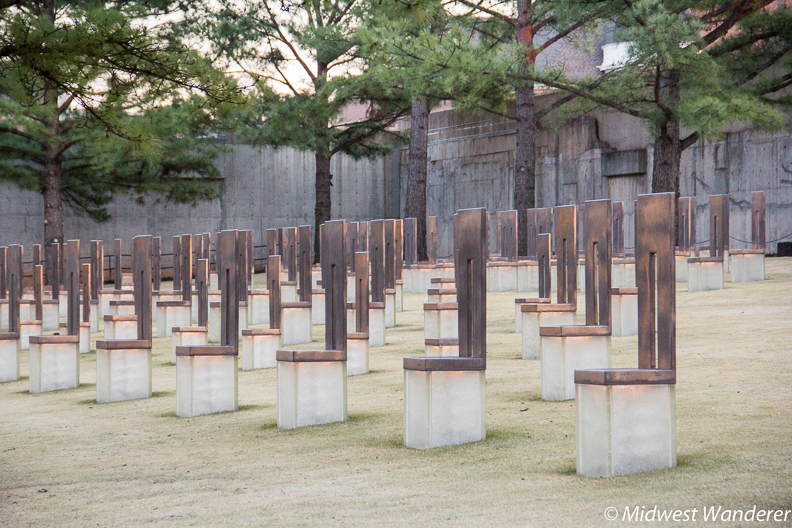 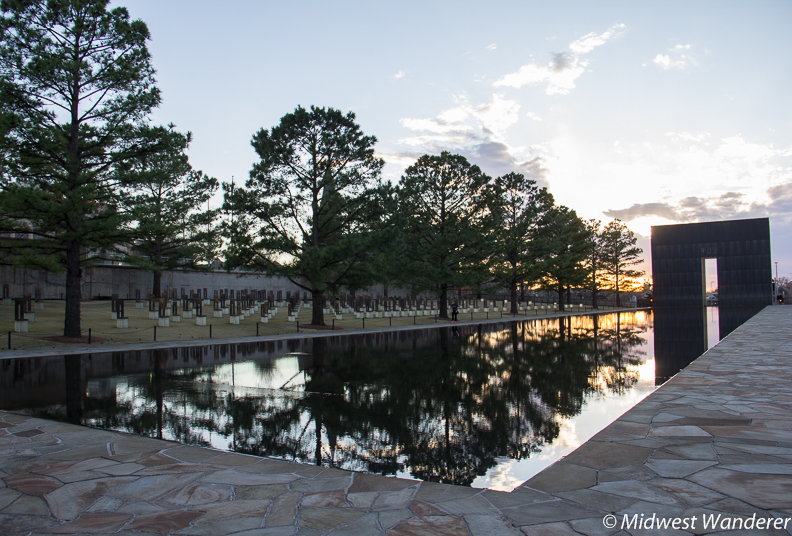 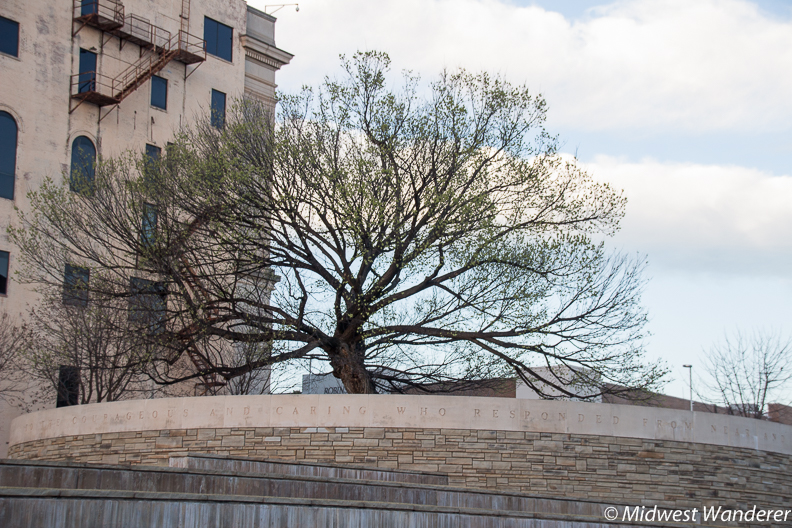 Following the incident, a temporary fence was installed around the area for security. The fence became a memorial with tokens of support and remembrances. A portion of that fence is now a permanent part of the memorial.

Though not part of the memorial, another touching symbol stands across the street from the memorial, on the grounds of the St. Joseph Old Cathedral. A statue of Jesus, His back toward the site of the former Murrah building, His hand covering his face, is titled “And Jesus Wept.” 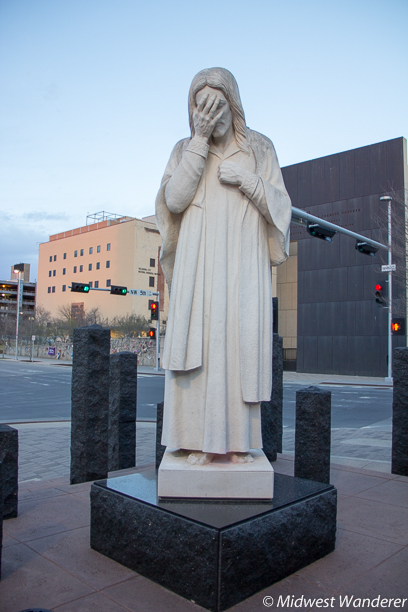 The Oklahoma City National Memorial & Museum is a very powerful and somber experience, heavily highlighting the people involved and how they coped with the tragedy.

If you visit the Oklahoma City National Memorial & Museum

Disclosures: My visit to Oklahoma City was hosted by the Oklahoma City Convention and Visitors Bureau, and our tickets to the Oklahoma City National Memorial & Museum were complimentary. However, all opinions expressed in this article are my own.
This article contains an affiliate link, which means that if you book a room using this link, I will receive a small commission at no additional cost to you.

Before this summer, I knew little about Wild Bill Hickok. Then, within just a few weeks, we visited three places within Kansas and Illinois that all shared Hickok stories—quite a coincidence. I learned several fascinating facts about him. Here are END_OF_DOCUMENT_TOKEN_TO_BE_REPLACED