It was considered the “Walmart” of its time. Fort Madison, the first U.S. settlement on the upper Mississippi River, was set up as a trading post, also known as a factory. It was the third highest revenue grossing factory in the country. But by 1813 the post was abandoned and burned. A replica of the post, known as Old Fort Madison, tells the story of the rough life soldiers faced at Fort Madison. 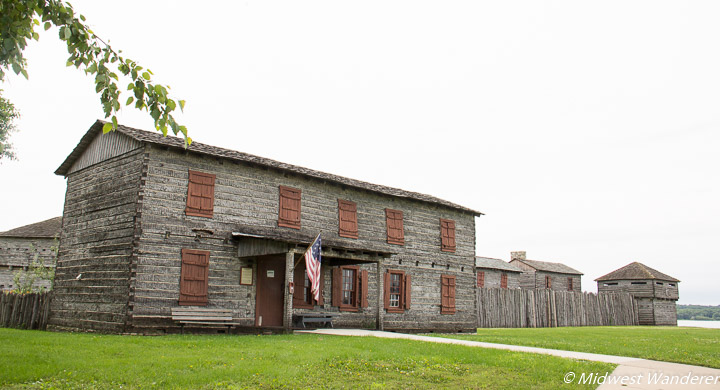 Dr. Eugene Watson, Site Director of Old Fort Madison in Fort Madison, Iowa, gave our travel group a history lesson as he guided us through the fort. Although the replica is almost exactly like the original, it’s in a different location along the Mississippi River.

The United States set up a trading post in 1808 in order to build a relationship with the Native Americans. The fort was constructed to protect the trading post and the American interest in the Upper Mississippi Valley. However, trouble came to Fort Madison with the War of 1812, with attacks by hostile Winnebago and later, the Shawnee. The trading post was burned. After that, supplies and food were hard to get. In November 1813 the post commander ordered the fort abandoned and burned.

Life as a Soldier at Fort Madison

The first rooms we saw in the fort were the officers’ quarters. The small rooms would have been plastered and filled with fancy furnishings, like china, carved molding around the fireplace and bearskin rugs. Two unmarried officers shared one room. If an officer was married, his entire family shared one room. 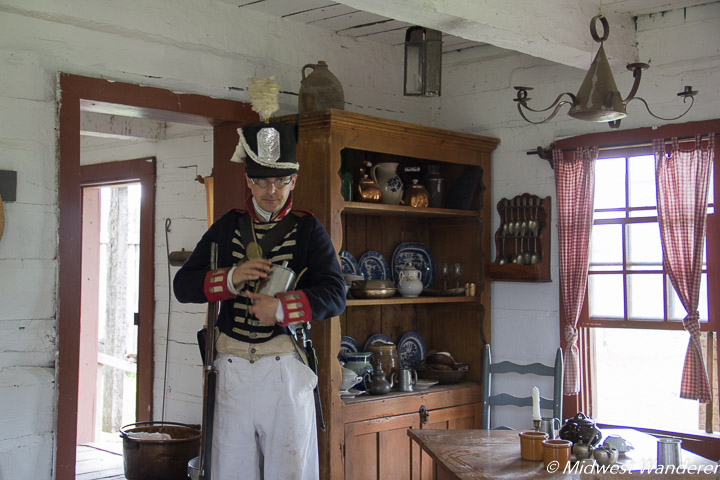 Although the enlisted men’s barracks were the same size as the officers’, each room held eight to twelve men. With two or three sets of bunk beds, two men shared a bed. It was a fairly warm, humid day when we visited, with hundreds of inch-long mayflies flying around and covering the buildings. I can only imagine how uncomfortable it would have been for the men.

Outside, Dr. Watson pointed out an oven, the type that would have been used. A blacksmith shed is on the grounds, but the billows were not functioning during our visit and the grounds closer to the river were beginning to flood from the rain over the previous few days, so we didn’t go out there. 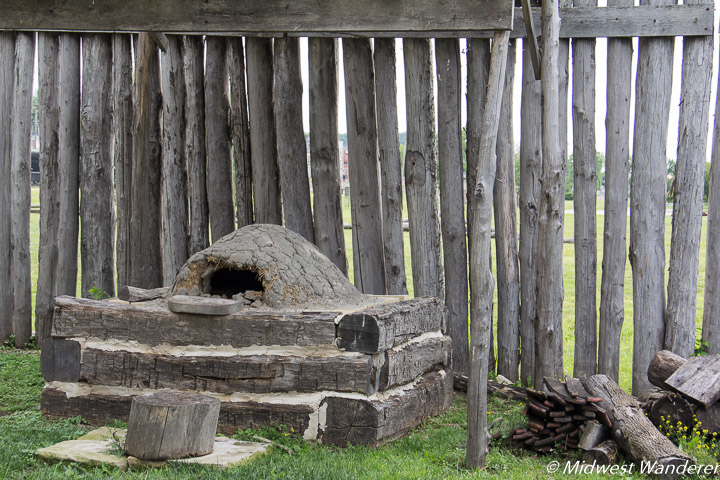 Dr. Watson also pointed out a wooden horse and a stockade that were used as punishments for soldiers who didn’t toe the line. Punishments were issued mostly for drunkenness or goofing off on guard duty. Getting caught sleeping in a block house while on guard duty was grounds for the death penalty. Flogging was a common punishment. 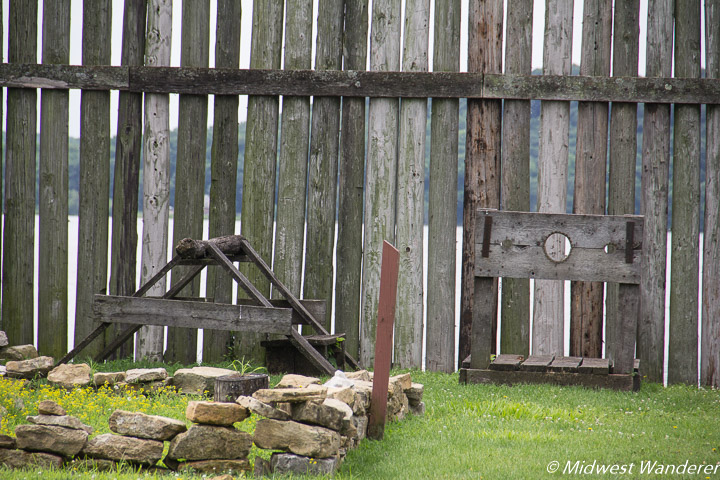 Soldiers often likened life at Fort Madison to slavery. Because men rarely reenlisted, flogging was banned for two years. Instead, they used the wooden horse for punishment. They would handcuff the offender’s hands behind his back and chain six-pound cannonballs around his ankles and leave him to sit there.

The military would hire the wives of four enlisted men to do the wash. Because they were military employees, they were subject to the same punishments as the men, including flogging.

One of the rooms at the fort was used as the surgery for men who were shot. Only four men were operated on during the five years the fort existed. Two of the four survived. It is believed that originally a surgeon was on staff. However, later a lieutenant played doctor and actually did the surgery on the four men.

Overall, 21 men died during the history of the fort. Half of them were killed in action, and the rest died of disease. Using leeches to “bleed” a patient was common practice at that time. 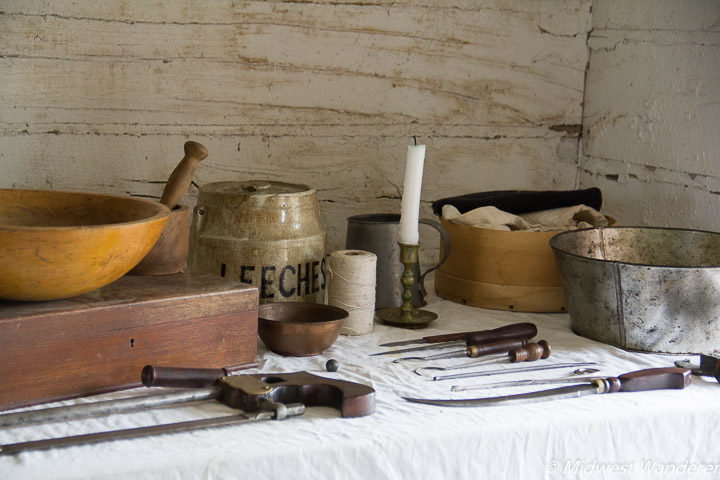 Several early uniforms were on display, and Dr. Watson was wearing one. Made of wool, the uniforms were especially uncomfortable during the summer. Musician uniforms were usually the same as other soldiers but in reverse color. Musicians were an important part of the Army then. In fact, the fife and drum corps was used to relay orders. 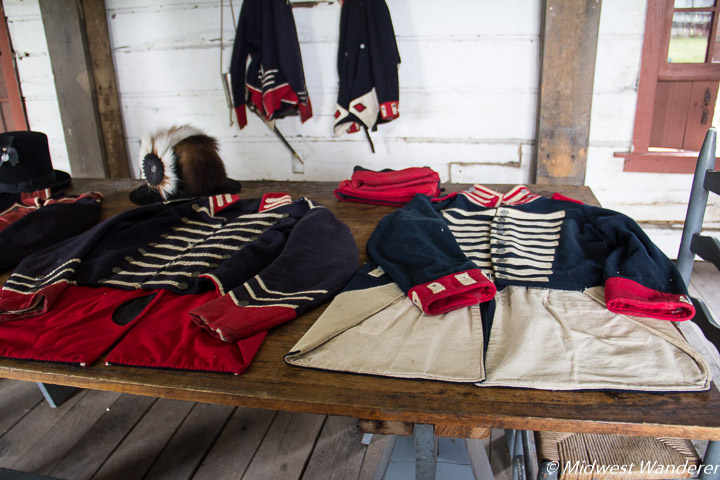 Fur, lead and feathers are some of what the Native Americans traded for goods. Fur ranged from bear to fox to raccoon. Deer hides were sold in Europe, but the market was eventually glutted, dropping the price. Beaver, otter and muskrat fur was sold as hatter’s fur. Lead was used in pewter dishes; they didn’t know then that it was poisonous. Feathers were used to decorate hats, as fuses in cannons and even in corsets, to stiffen them. 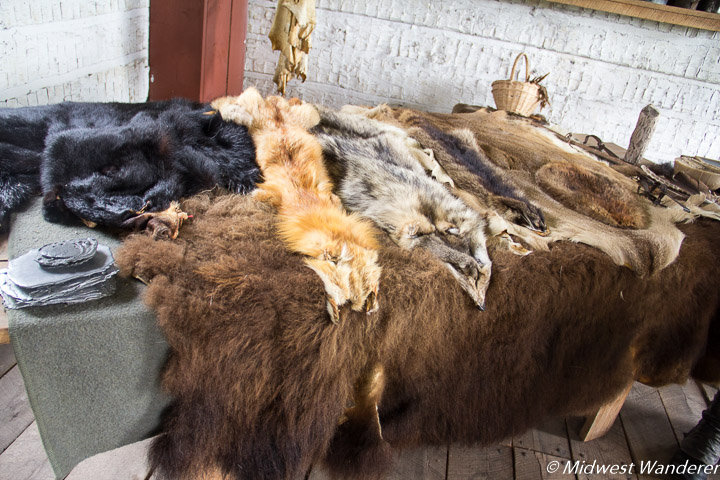 Goods that could be bought or received in trade at the trading post included premade clothing, calico fabric, firearms, black powder, beads, and pans.

Fun fact: They didn’t use heavy cast iron pots and pans back then. Dr. Watkins said that is a “reenactment thing.” Cookware was actually made of lighter-weight metals like sheet iron, tin, copper and brass, something that would be lighter to carry around.

The last part of our tour was watching Dr. Watkins shoot a musket. Here is a video of it:

If you go to Old Fort Madison

Old Fort Madison, located at 811 Avenue E in Fort Madison, Iowa, is open Tuesday through Sunday May to September and Saturday and Sunday in April and October. Closed November through March. Visit the web site for hours, admission rates and other details.

Accommodation: I stayed at the Kingsley Inn during my visit to Fort Madison. Find the best deal, compare prices, and read what other travelers have to say at TripAdvisor

Disclosures: My visit to Old Fort Madison was hosted by the Iowa Tourism Office, but any opinions expressed in this post are my own.
This article contains an affiliate link. If you purchase a product or book a hotel room through these links, I will receive a small commission at no additional cost to you.

Howard Steamboat Museum in Jeffersonville, Indiana, pays tribute to the Howard family and their steamboat building company. The tour combines a history of the ornate Edmonds and Laura Howard mansion and the shipyard located across the street, which the Howard END_OF_DOCUMENT_TOKEN_TO_BE_REPLACED