Driving through the flat Texas panhandle, you’d never guess that only 25 miles south of Amarillo the earth opens to the second largest canyon in North America. Palo Duron Canyon, known as the Grand Canyon of Texas, stretches 120 miles long, ranges from 6 to 20 miles wide, and is more than 800 feet deep. However, unlike the Grand Canyon, where you can reach the canyon floor only by mule or foot, you can drive right down to the canyon floor in Palo Duro Canyon State Park. 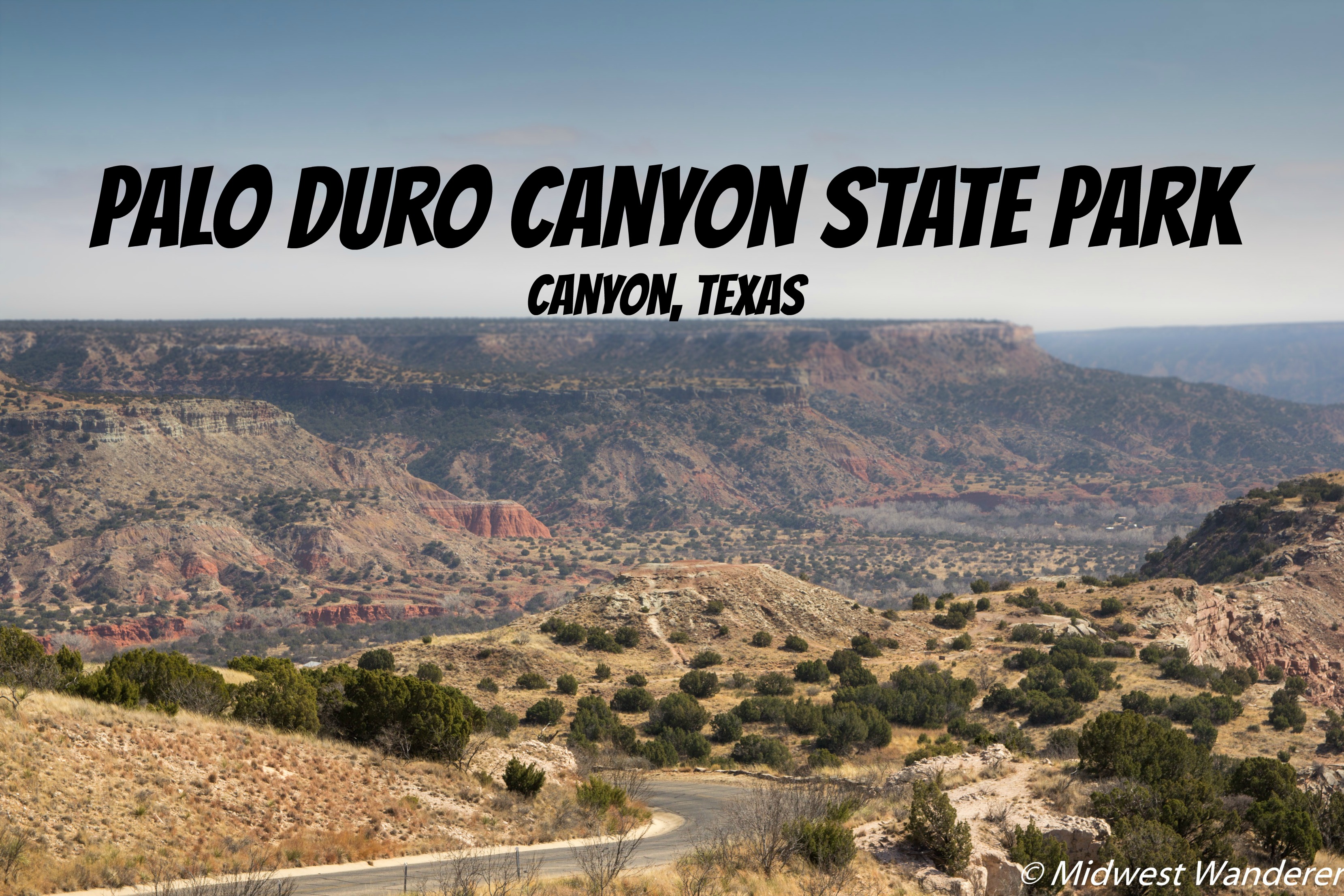 Texas purchased the land for Palo Duro Canyon State Park in 1933. Building the park was a Civilian Conservation Corps (CCC) project. Men were paid $30 per month and were provided with housing, food, clothing, and job skills training.

Once their own housing and work buildings were complete, the CCC men built the road from the rim to the canyon floor. They made trails and built cabins, furniture, and the El Coronado Lodge. The lodge now serves as the park’s visitor center. In the visitor center is an exhibit about the CCC and a bench that the men made around 1934.

In 1936 Isabel Robinson established the Palo Duro School of Art. Student housing was twenty-five tent cottages and a bathhouse on a plateau below the El Coronado Lodge. During the day the students hiked up to the lodge for art lessons. At night they returned to the tent village, where they sat around a fire roasting hot dogs, telling stories, and singing. The school ran until 1941.

A reconstructed tent is visible from the overlook near the visitor center. However, when we visited in February, only the tent frame stood. I imagine the tent was removed for the winter. 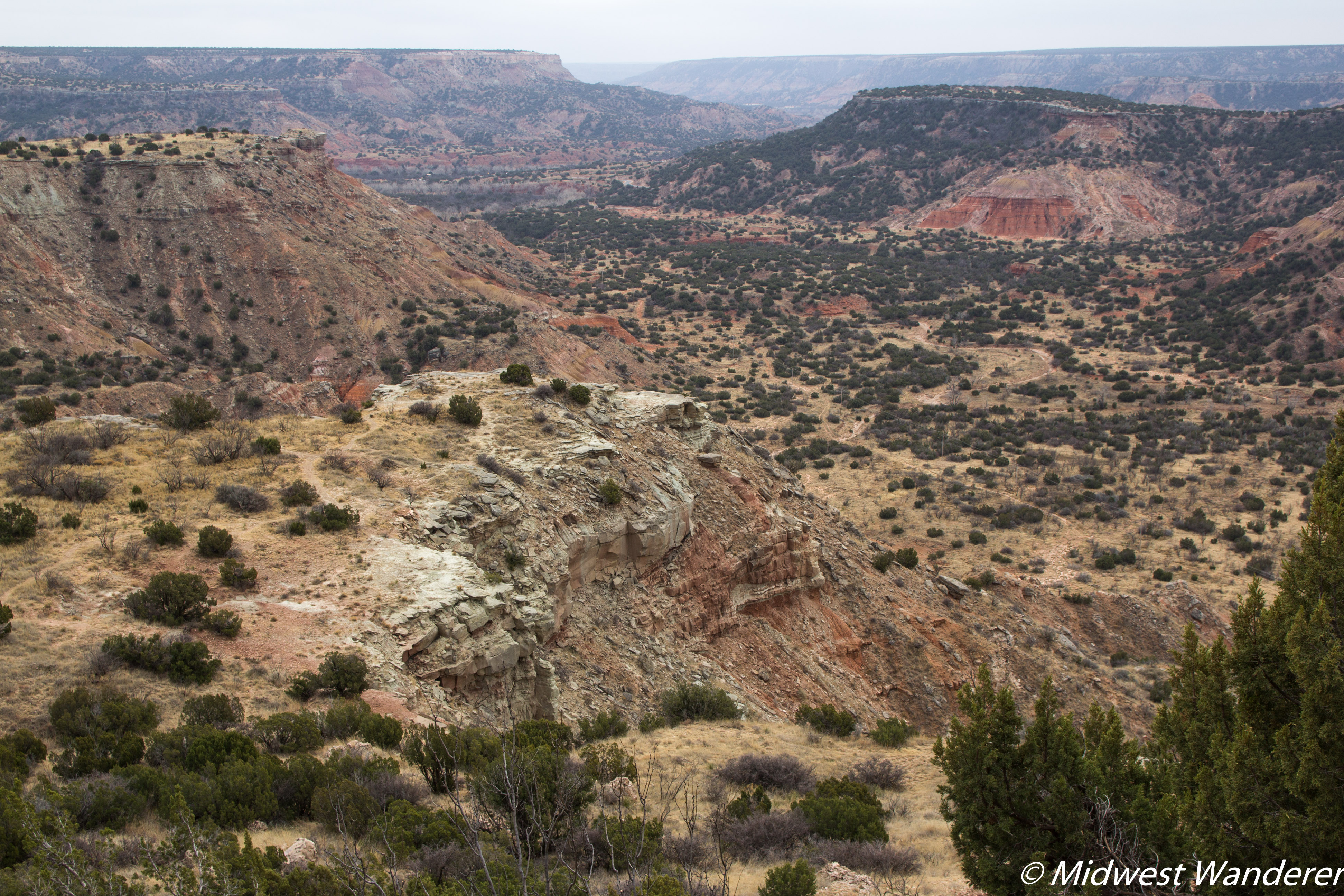 Since it was a rather chilly 40 degrees Fahrenheit and overcast during our visit, we chose to drive through the park, stopping to take photos here and there. For those who prefer to hike, there are a lot of trails to explore, thirteen to be exact. The trails range from easy to moderate, with distances of .49 mile to 3.73 miles. I love that there is a thermometer at each trailhead, a good reminder to carry water with you, especially on hot days. 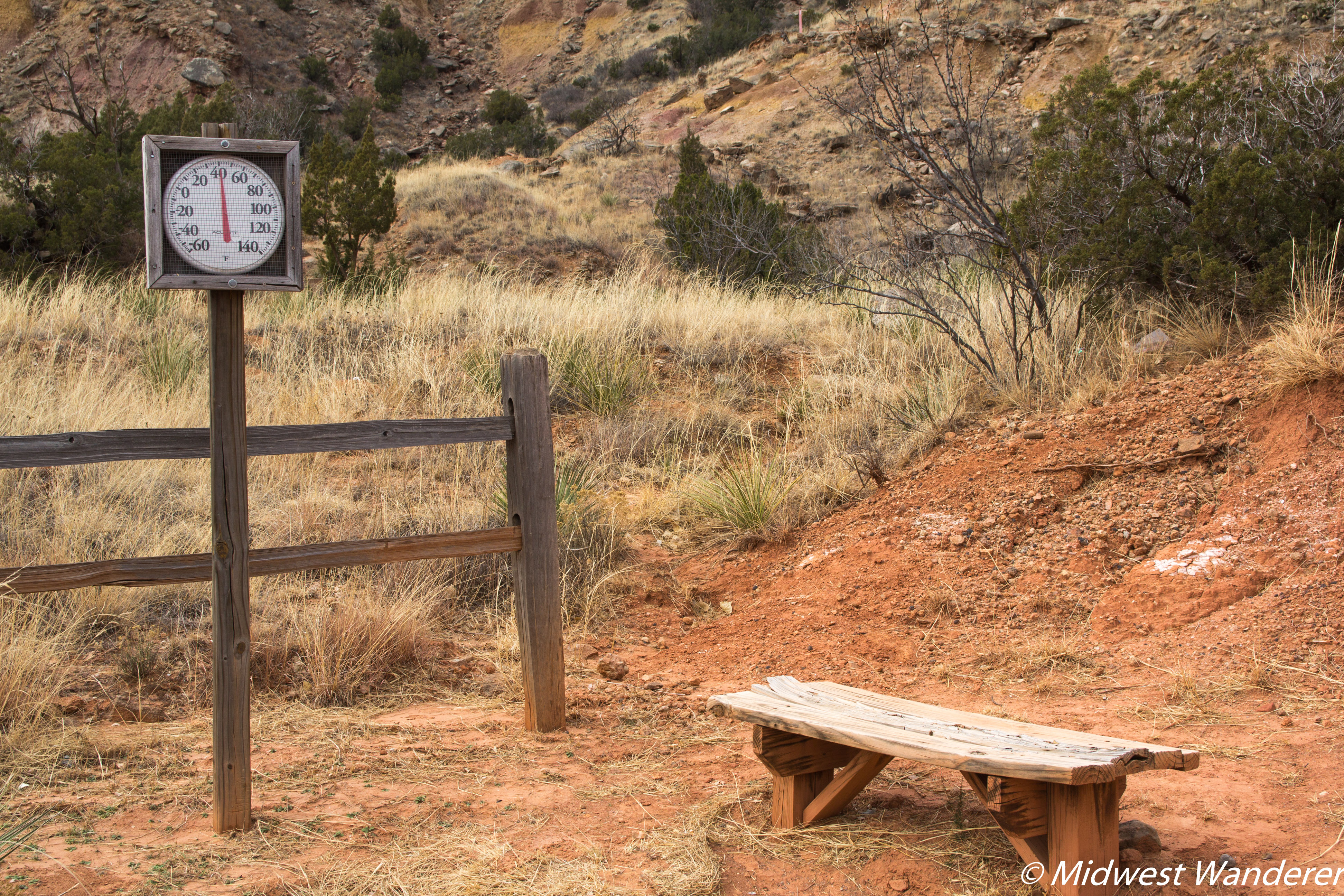 Once the clouds broke and the day became sunny, we did hike the shortest trail, the easy .49 mile Pioneer Nature Trail that looped down to the Prairie Dog Town Fork of the Red River. I was surprised at how narrow the river was, perhaps because it had been dry in the area for several months. 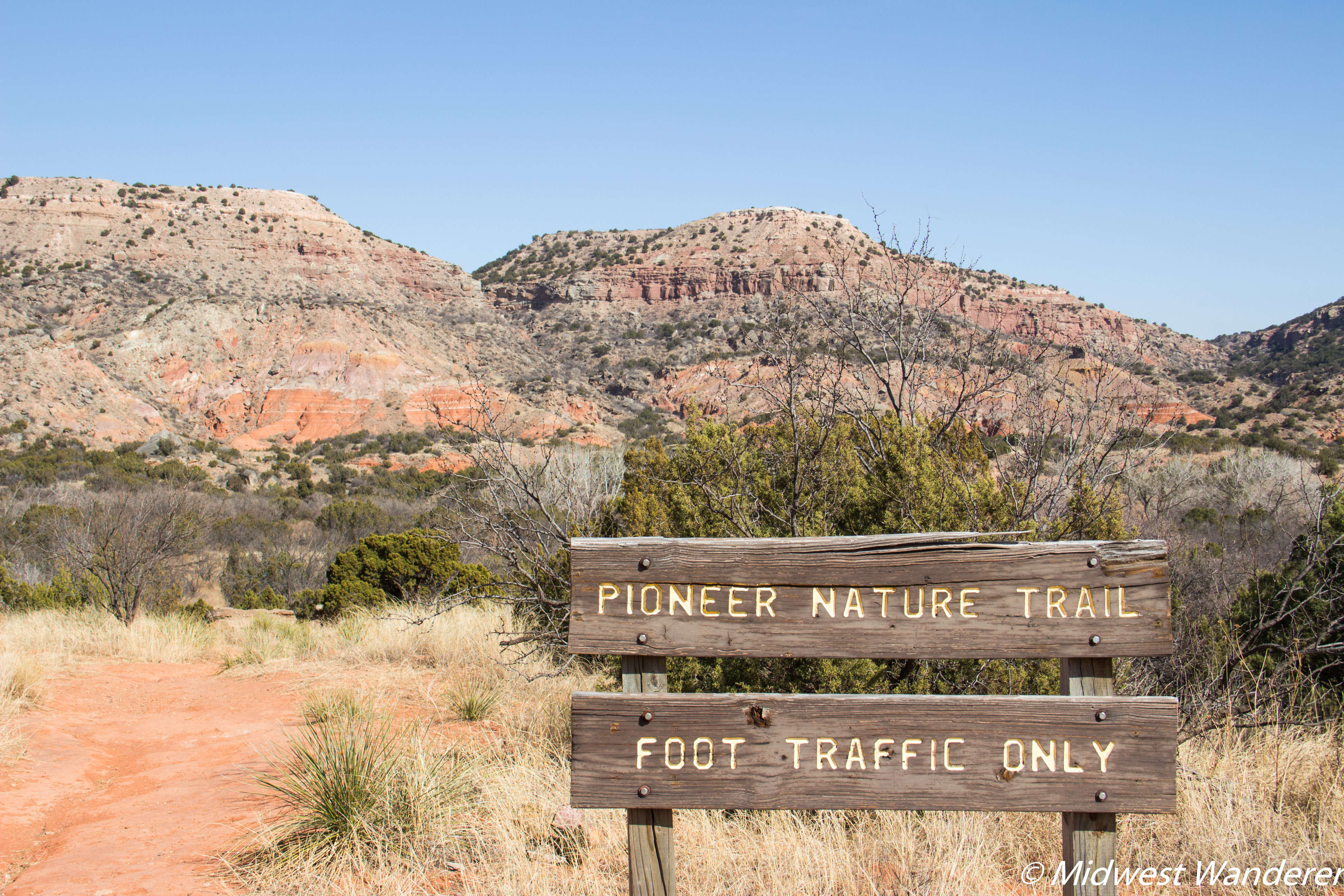 Some of the trails are designed for mountain bikes, which look like a lot of fun, and one trail is a designated equestrian trail.

We enjoyed a “world famous” burger and hand-cut fries at the Trading Post on the canyon floor, where you can also buy souvenirs. 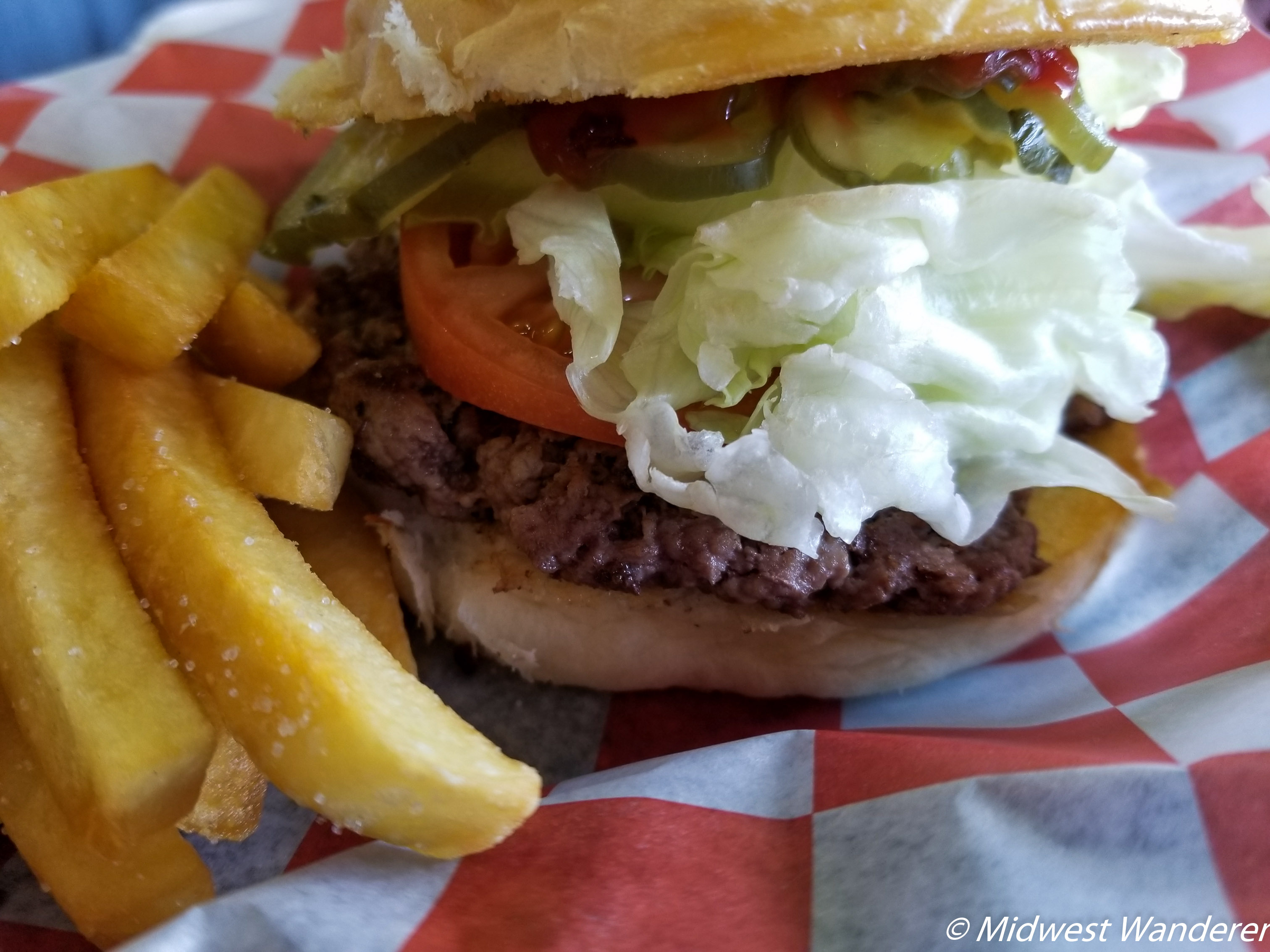 See a show in the amphitheater

“TEXAS,” an outdoor musical drama, is performed during summer months at the park’s Pioneer Amphitheater. Preceding the show you can opt for a barbecue dinner. I imagine the dinner and show is similar to the Medora Musical and Pitchfork Steak Fondue that Skip and I enjoyed in Medora, North Dakota a couple of years ago. We’ll have to make a point of going back to Palo Duro Canyon State Park in the summer so we can see the musical. That’s the downside of visiting some places in the winter. Although crowds are non-existent, which is great, some activities aren’t available in the winter.

Palo Duro Canyon State Park is located in Canyon, Texas, off of TX-217 E about 25 miles south of Amarillo. Campsites are available, some primitive and some with water and electric hookups. Cabins are also available, some with bathroom facilities in the cabin and others with restrooms nearby. If you prefer to stay in a hotel, Amarillo offers many options. Check Amarillo rates and reviews on TripAdvisor 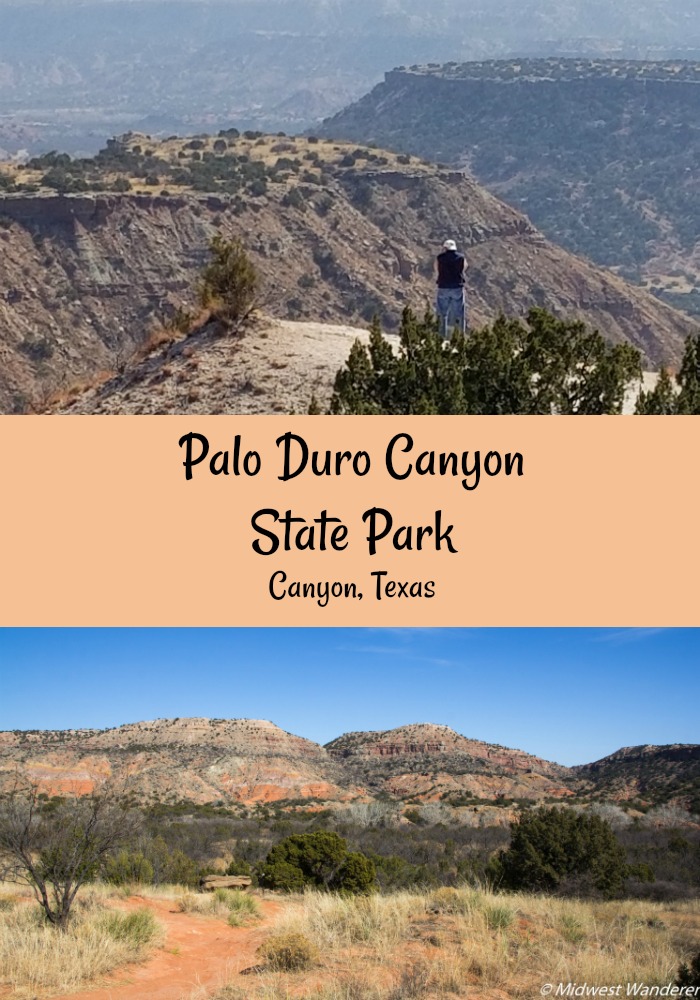 Disclosure: This article contains an affiliate link. If you book a room through the “Check room rates” links above, I will receive a small commission at no additional cost to you.

Before this summer, I knew little about Wild Bill Hickok. Then, within just a few weeks, we visited three places within Kansas and Illinois that all shared Hickok stories—quite a coincidence. I learned several fascinating facts about him. Here are END_OF_DOCUMENT_TOKEN_TO_BE_REPLACED