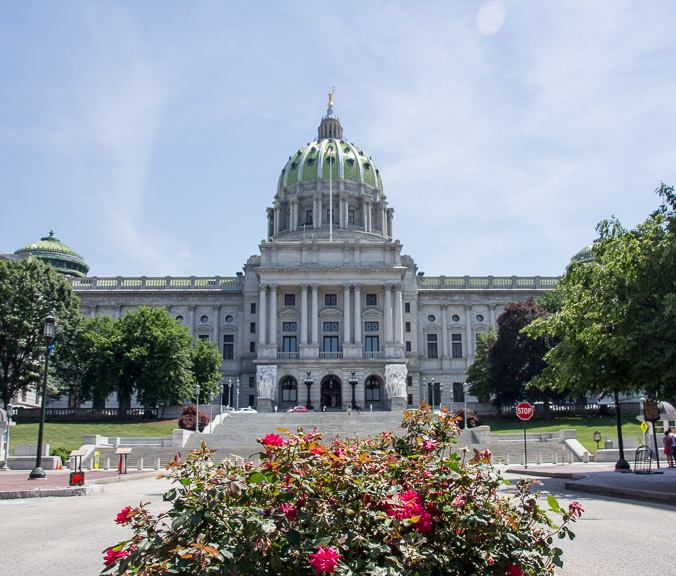 Harrisburg is actually Pennsylvania’s third state capital, and the building is the third on the current site. The state government began, not surprising, in Philadelphia at Independence Hall. It moved to Lancaster in 1799, and then to Harrisburg in 1812,

The first capitol building in Harrisburg burned down. A young boy who was cleaning out the fireplace dropped embers between the floorboards. The embers caught the dust and joists on fire. By the time the fire was discovered, it was too late to control.

The government budgeted $550,000 to replace the building. Before that was even finished, they decided they didn’t like it. They held a contest for the design of yet another building. Joseph Miller Huston won the contest and was given a $13 million budget.

This building was constructed around the existing unfinished building while government business continued inside. It took four years to build and another 21 years to add the art, marble and wood work.

From the sweeping Carrara marble staircase inspired by the staircase at the Paris Opera to the 272-foot high, 52 million pound dome modeled after the dome in St. Peter’s Basilica in Rome and 23 karat gold trim, the capitol’s rotunda is jaw-dropping beautiful. 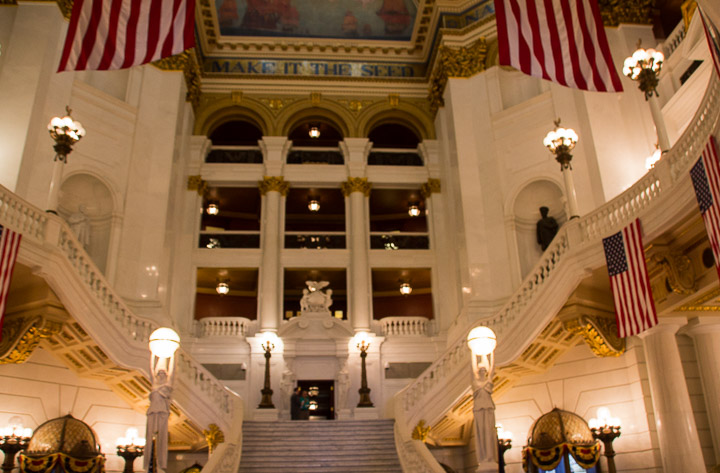 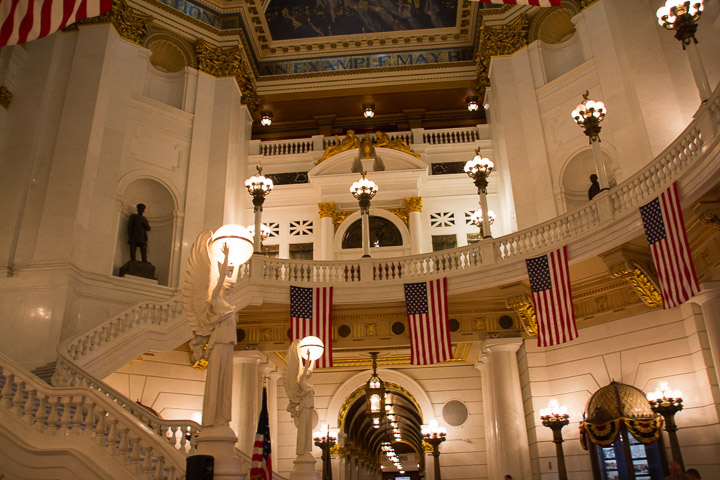 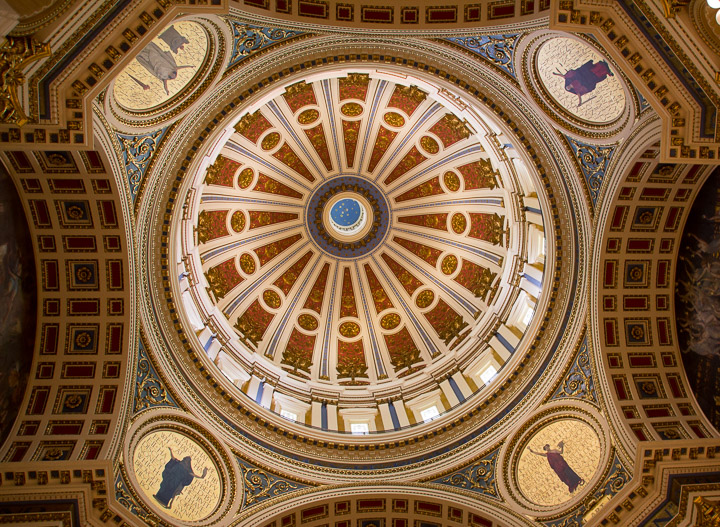 Cast bronze lights, weighing about a ton each, are original electric lights dating back to the building’s 1906 opening. Back then they had only 25-watt bulbs, and the diamond-shape hand-cut crystal in the lamps reflected a brighter light. 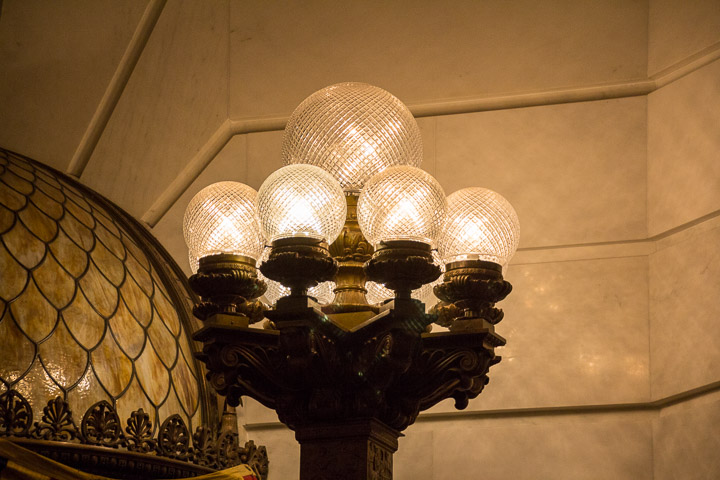 The rotunda floor is laid of Moravian mosaic tiles made by the Mercer Tileworks in Doylestown, Pennsylvania. The mosaics represent early modes of transportation, insects and wildlife of Pennsylvania. There is also a plaque where Teddy Roosevelt stood when he dedicated the building. 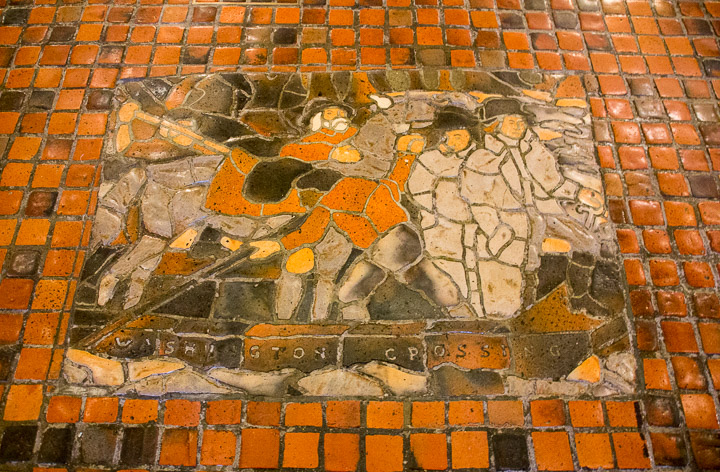 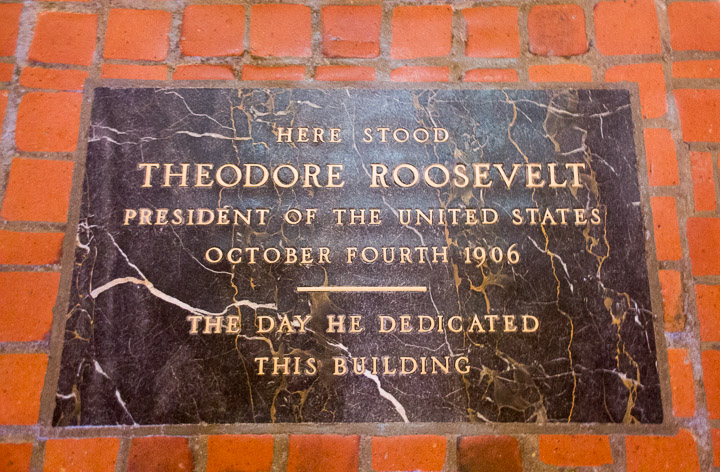 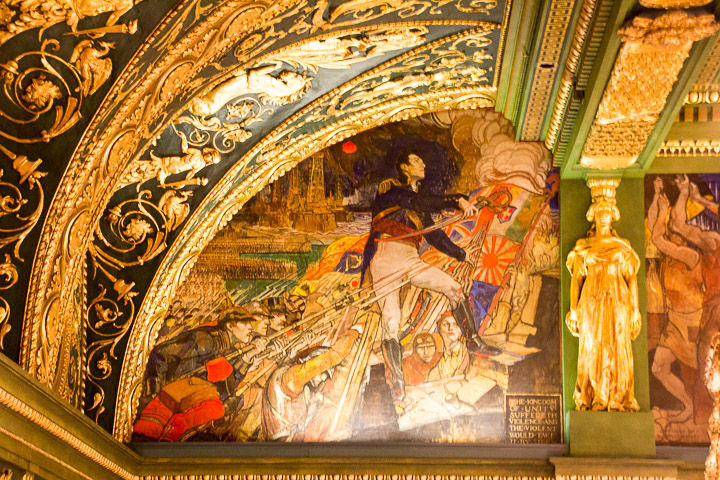 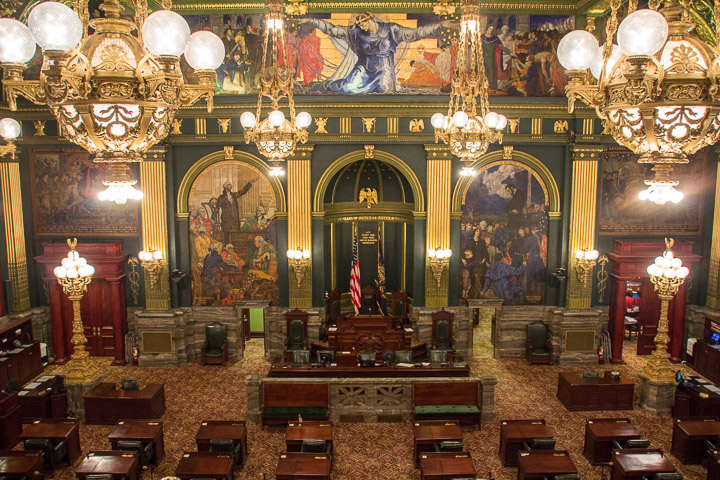 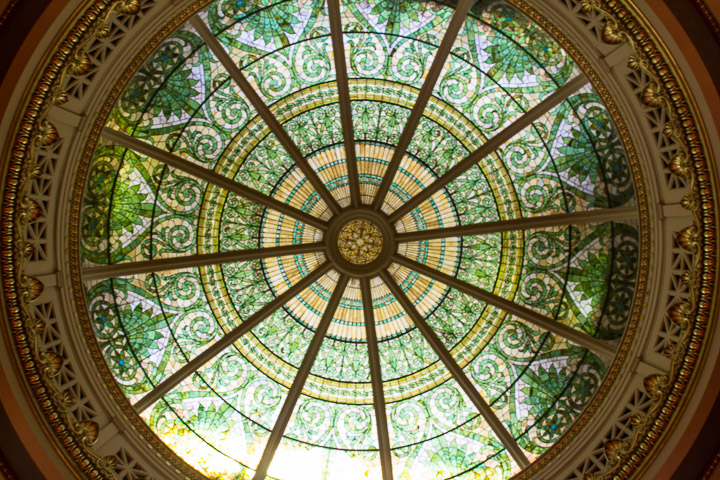 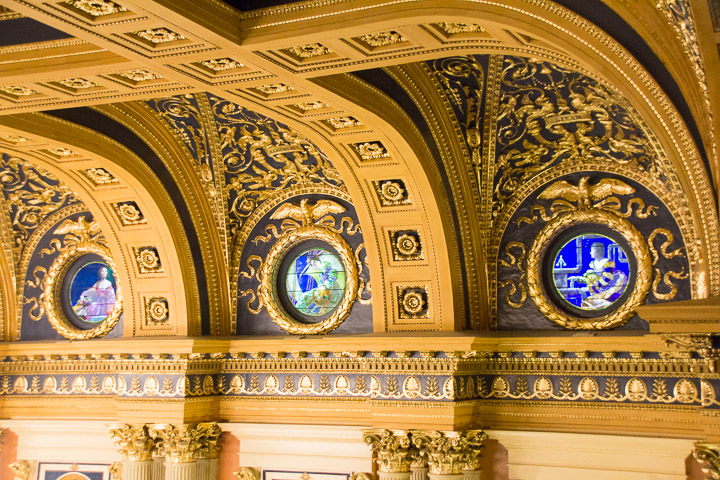 Your tour guide will point out the different paintings and what each of them depicts. For instance, “The Apotheosis,” the 35-square-foot mural in the House Chamber depicts the Genius of States watching over important figures in Pennsylvania history, including William Penn, Benjamin Franklin, Daniel Boone, and Abraham Lincoln. 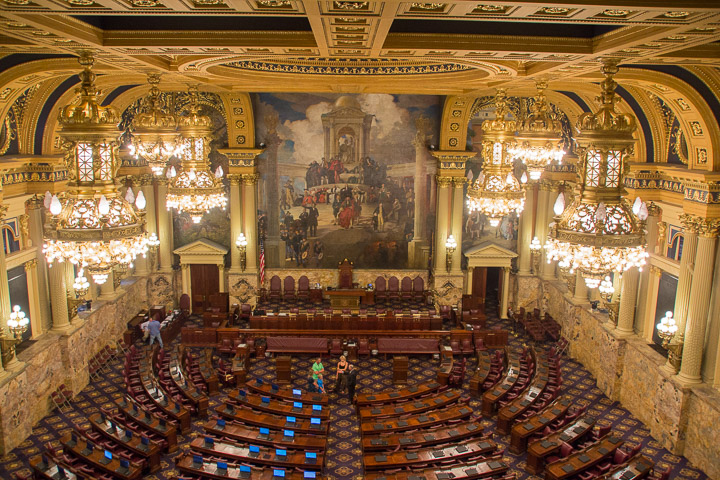 Another artist, Violet Oakley, broke ground as the first American woman to receive a public mural commission. She was commissioned to paint 43 murals in the building, including all of the paintings in the Supreme Court. 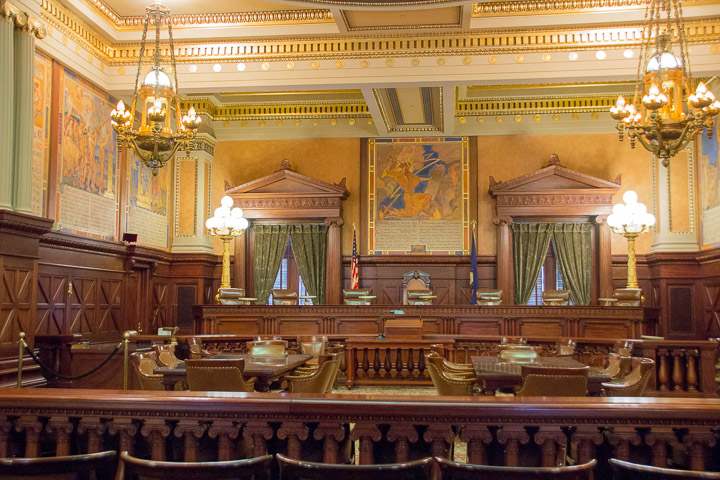 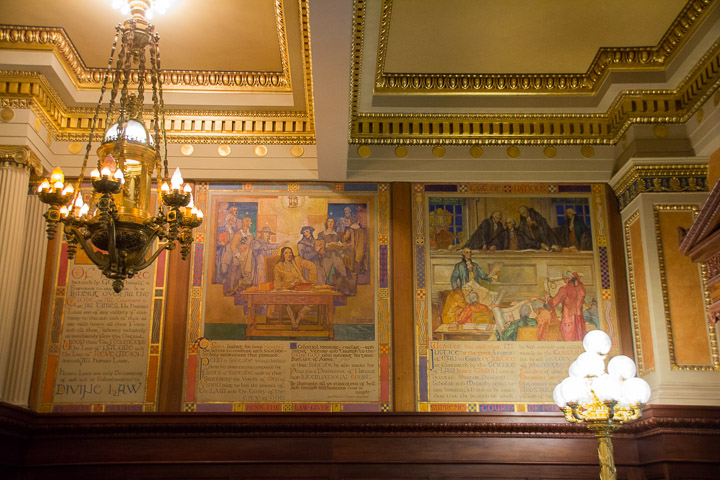 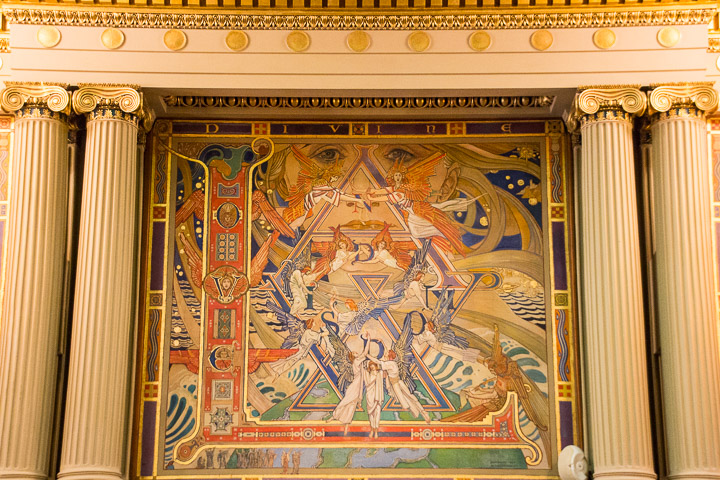 I noticed a grandfather clock in the Supreme Court room with the glass cut in the shape of a keystone. Pennsylvania is known as the “Keystone State.” The clock is one of 150 in the building. A gentleman hand winds all of the clocks. It takes him two days, and he walks 12 to 13 miles to get to all of them. 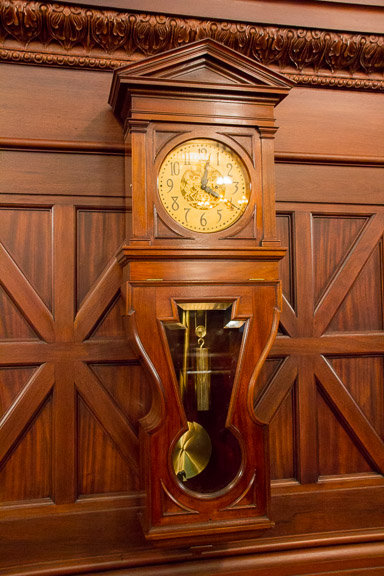 Besides marveling at the breathtaking beauty of the Pennsylvania State Capitol, you can watch the state legislature at work. The galleries in both the House of Representatives and the Senate are open to the public. Session is typically on Monday, Tuesday and Wednesday.

Tours don’t go into the Supreme Court area because it would be too disruptive, but the public can sit in on those sessions, as well.

Following the tour we stopped at the Welcome Center, located in the East Wing. The Welcome Center is a sort of mini hands-on museum with exhibits explaining the people and events of Pennsylvania history. One interactive exhibit tests your knowledge on Pennsylvania state symbols. 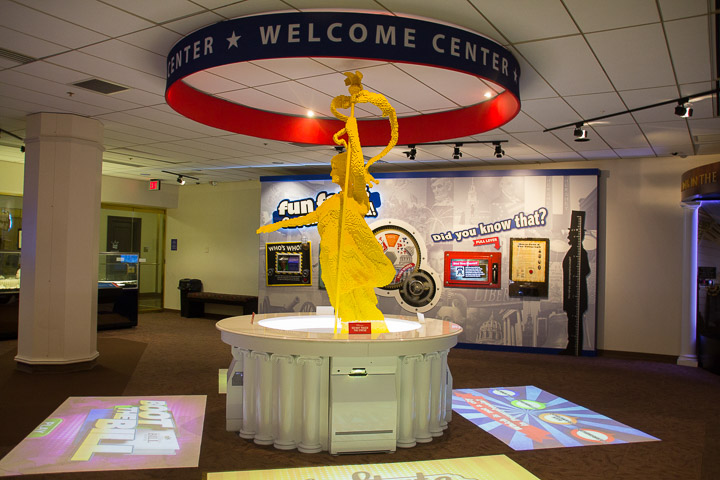 The East Wing was added on to the building in 1987. Besides the Welcome Center, the East Wing includes the legislative offices, a gift shop and a restaurant.

The Pennsylvania State Capitol is located at 501 N 3rd Street in Harrisburg, Pennsylvania. Free guided tours are offered Monday through Friday, every half hour from 8:30 a.m. to 4 p.m. and weekends and most holidays at 9 a.m., 11 a.m., 1 p.m. and 3 p.m. Check the website for further details.

Accommodations: My accommodations during my Pennsylvania visit were at the Red Umbrella Bed and Breakfast in Grantville, Pennsylvania.
Find the best hotel deal, compare prices, and read what other travelers have to say at TripAdvisor.

Disclosures: Visit Hershey & Harrisburg hosted my visit to Harrisburg. However, any opinions expressed in this article are my own.
This article contains an affiliate link. If you book a room through the TripAdvisor link above, I will receive a small commission at no additional cost to you.

Before this summer, I knew little about Wild Bill Hickok. Then, within just a few weeks, we visited three places within Kansas and Illinois that all shared Hickok stories—quite a coincidence. I learned several fascinating facts about him. Here are END_OF_DOCUMENT_TOKEN_TO_BE_REPLACED