When I first heard, several months ago, about the total solar eclipse crossing the United States this summer, I knew I wanted to go to a point of totality. It would be cool to watch the moon completely cover the sun and to experience total darkness in the middle of the afternoon.

In the weeks leading up to the eclipse I read several articles about the subject. One article suggested that scientists would be studying the effect of the eclipse on wildlife, including whether cicadas chirp during a total solar eclipse. Odd, I thought. It seems that would be a simple thing to find out. Scientists should already know that. I made a mental note to listen for cicadas myself.

Preparing for the solar eclipse

The solar eclipse would span the entire United States, from Oregon to South Carolina. In the Midwest, it would go through Nebraska, Missouri, and Illinois. We planned to head either toward St. Louis or to Carbondale, Illinois. But that’s as far our planning got until two weeks before the event. We hadn’t decided exactly where to go. Nor had we bought the special filter for our camera or the eclipse glasses that would allow us to look up at the sun and see the eclipse without going blind.

Finding the camera filter was a challenge, but my husband finally found one online. The eclipse glasses were another story. Every store in our area was out of them. Even Amazon, our go-to source for so many things, was out of them. Once again, Skip came through. He contacted B&H Photo Video, who still had 10-packs left. (It turns out our daughters and their families needed them, too, so the extras didn’t go to waste.)

As for the location, we still didn’t know where to go. St. Louis would be packed. In Carbondale, Southern Illinois University was hosting several events, which were sold out. They were also selling parking passes, and the parking spots on pavement were gone. Only grass parking spots were available, and those were going quickly. So it was obvious that Carbondale would be crowded, as well. We decided to head toward the Shawnee National Forest and wing it. Even a Walmart parking lot would do, as the eclipse would be visible from anywhere in the area.

Heading to the solar eclipse

On Monday, the day of the eclipse, we loaded camera gear, lawn chairs, and a picnic lunch into the car and headed south. It would take four-and-a-half hours to get to the Shawnee National Forest area. We left at 6 a.m. In Carbondale, the eclipse would start at 11:52 a.m. at reach totality at 1:21 p.m. So the eclipse would occur close to the same time in the Shawnee National Forest. We allowed an extra hour to drive down, expecting heavy traffic in southern Illinois.

However, traffic was heavy from the start. At first I thought maybe it was morning commuter traffic, but when Skip pointed out license plate frames were from car dealers in the Chicago north suburbs, I knew they weren’t commuters. Forty-five minutes into our drive, we came to a construction zone—and a sea of red brake lights.

We had a CB radio in the car to monitor traffic. Northbound truck drivers were alerting southbound drivers of a ten-mile backup. We left the interstate as soon as possible and took an alternate route. Thank goodness we always carry paper state maps with us when we travel and rarely rely on GPS. I also grabbed our super-detailed Illinois Gazateer before leaving home. I was glad I brought the Gazateer along because it wasn’t long before our alternate route was backed up, too, and we had to seek an alternate to the alternate.

Finding a spot to view the eclipse

We reached the Shawnee National Forest area an hour later than our planned arrival time. Eclipse watchers were setting up lawn chairs in parking lots and in random areas throughout the forest. We thought about doing that, but not having stopped for hours, I was in desperate need of a bathroom.

Lucky break again! In Stoneyford, people were obviously setting up to see the eclipse in a park. A perfect spot! But a woman stopped us as we pulled in. Oh no, I thought, don’t tell me this is a private event. No. It’s just that they were charging $8 per car. Gladly! She told us there were bathrooms that she, herself, helped bleach clean. They were preparing for a town reunion on the weekend, and food vendors set up early. She directed us to park wherever we wanted to. Perfect! All the shady areas were taken, so we set up in the sun. At that point we didn’t care. The eclipse had already begun. 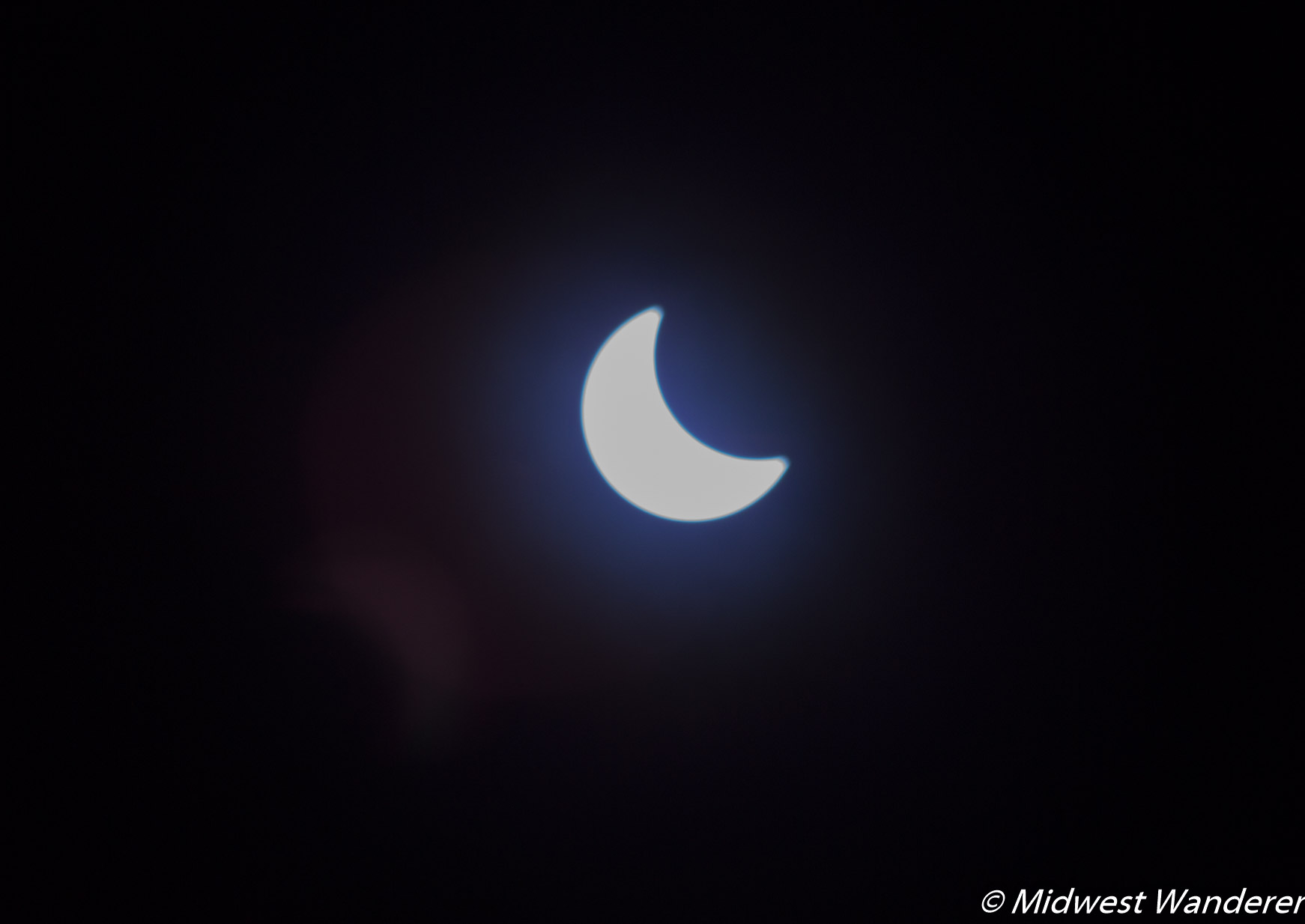 The intensity of the sun was strong in the open southern Illinois field on this 90-degree day. But in the awesomeness (and I mean that in the very literal sense) of watching the moon slowly cover the sun, I hardly noticed that I was sweating. 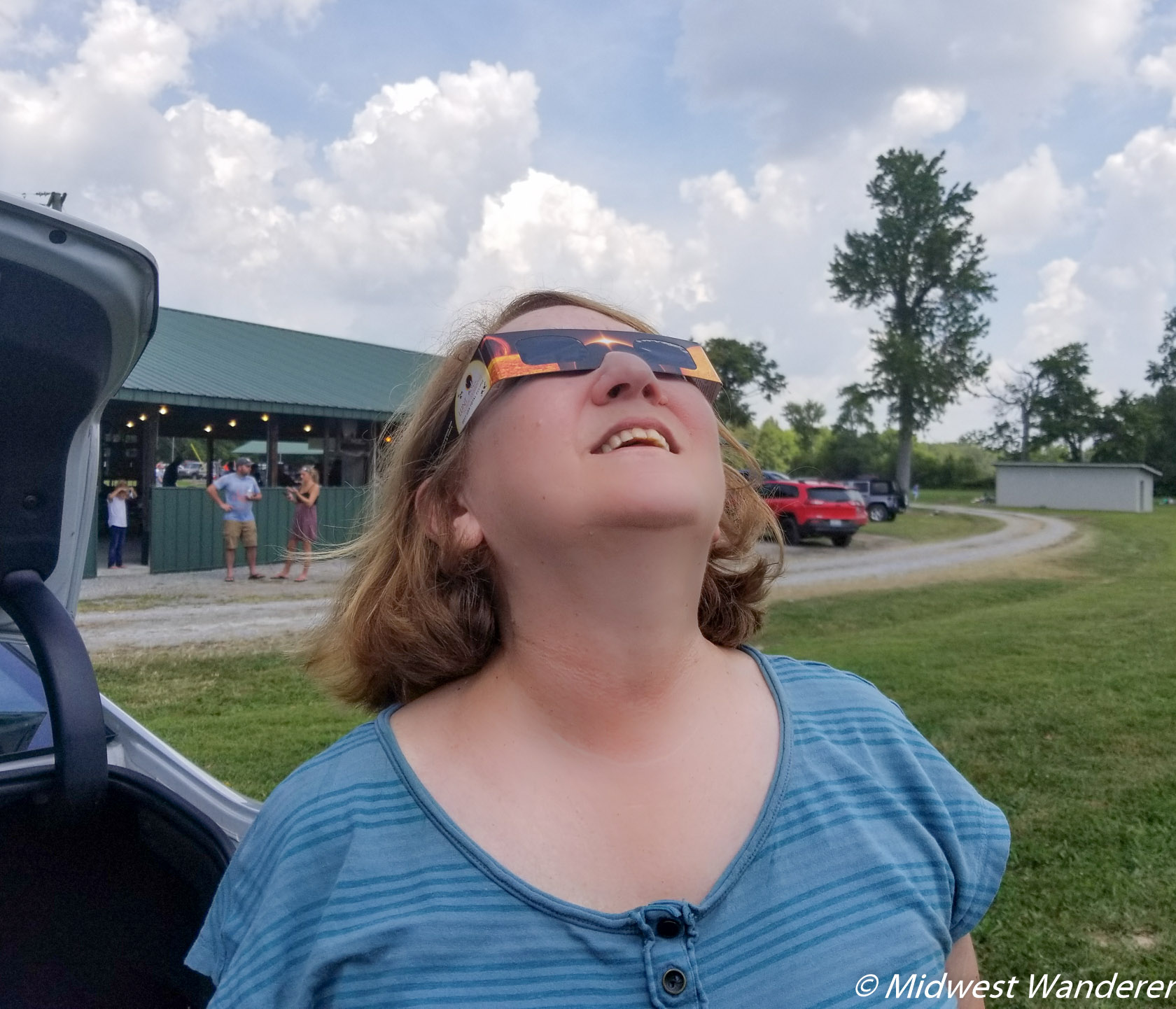 Skip was busy setting up the camera, adjusting it just so. He was in charge of shooting the eclipse photos. I took a few random pictures of the park, just to get a sense of how daylight was decreasing ever so slowly.

In the last few seconds of the moon completely covering the sun, the light daylight dimmed to dusk-like light. The weather cooled, became comfortable during that brief two minutes. And the cicadas? They chirped.

Looking toward the sun through the eclipse glasses, I couldn’t see anything. But in that two minutes and some-odd seconds during the total phase of the solar eclipse, it’s safe to look directly at the sun. A breathtaking bright blue ring shone around the moon as it obscured the sun. Seeing that possibly once-in-a-lifetime phenomenon of nature is something I’ll always remember. 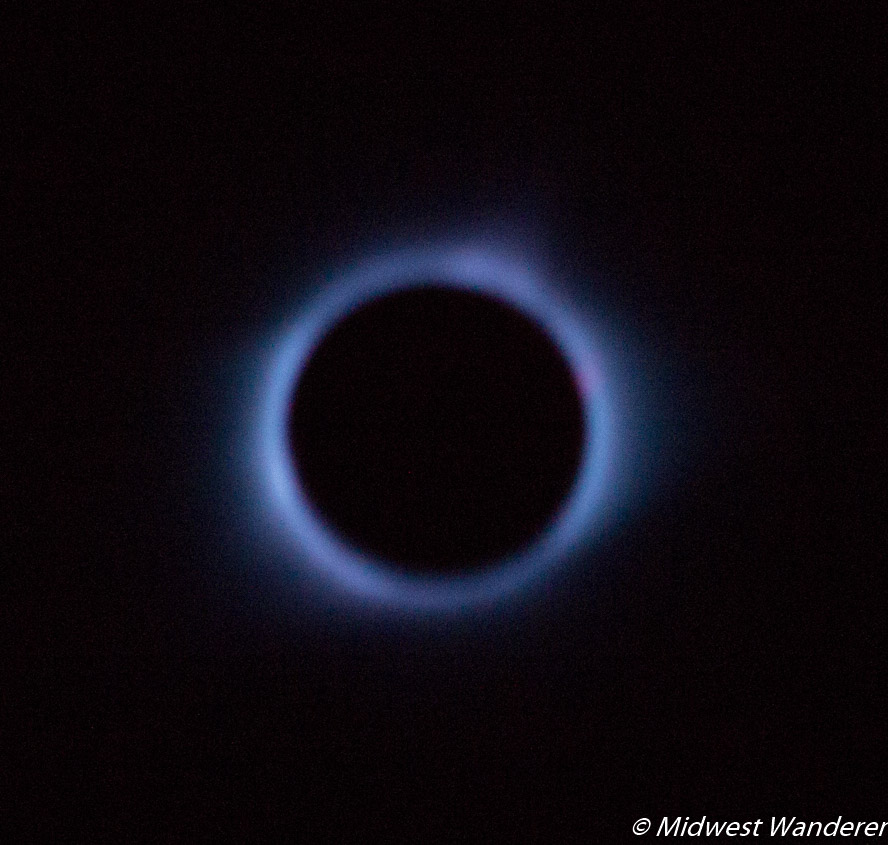 As the moon continued to move and expose the sun once again, daylight returned. The day’s heat returned, and the cicadas silenced. 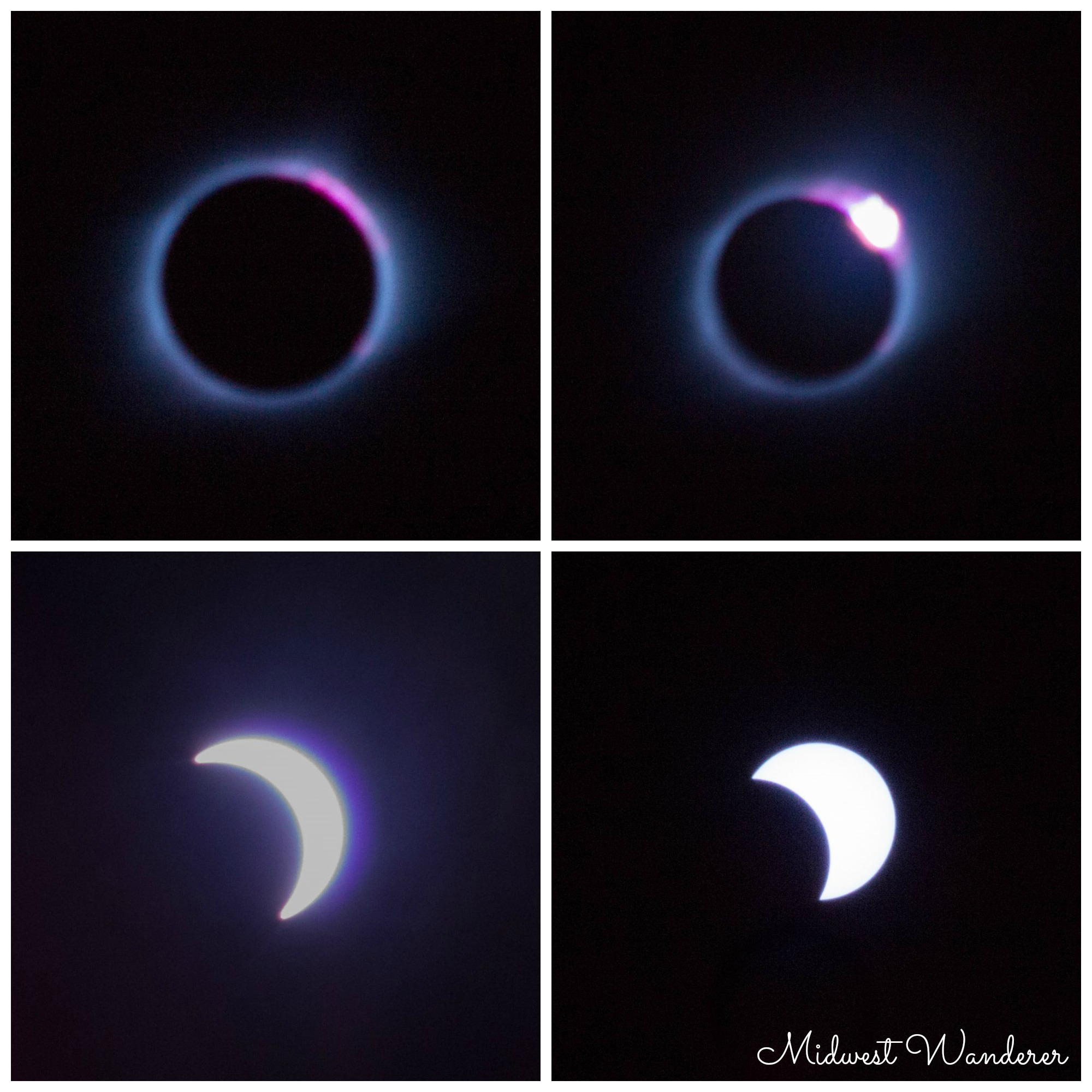 Disclosure: This article contains an affiliate link. If you purchase an item via the link, I will receive a small commission, at no additional cost to you.

2 thoughts on “Do Cicadas Chirp During a Solar Eclipse?”

Before this summer, I knew little about Wild Bill Hickok. Then, within just a few weeks, we visited three places within Kansas and Illinois that all shared Hickok stories—quite a coincidence. I learned several fascinating facts about him. Here are END_OF_DOCUMENT_TOKEN_TO_BE_REPLACED