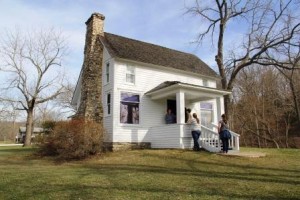 You may know her as the author of the “Little House” series of children’s books.  Or perhaps you’re familiar with the popular television show based on her books.  Little House on the Prairie, starring Melissa Gilbert and Michael Landon, ran from 1974 to 1983.  The show, which focused on the Ingalls family’s lives in 19th century western America, still plays in reruns today.

Laura Ingalls Wilder wrote the “Little House” book series, based on her real-life experiences, while she lived in her Mansfield, Missouri, home.  Today you can tour the home and browse the adjacent museum for glimpse at the life of the author.  Here are a few fun facts I learned about her and her family on my visit:

The Laura Ingalls Wilder Historic Home & Museum, open March through mid-November, is located at 3068 Highway A in Mansfield, Missouri.  Check the web site for hours and admission.

Before this summer, I knew little about Wild Bill Hickok. Then, within just a few weeks, we visited three places within Kansas and Illinois that all shared Hickok stories—quite a coincidence. I learned several fascinating facts about him. Here are END_OF_DOCUMENT_TOKEN_TO_BE_REPLACED