Big things happened here. Abraham Lincoln got his law license here on March 1, 1837. Two days later, in this building, he spoke out against slavery for the first time. In June of the same year Chicago received its charter. The building in which these historic events took place is Illinois’ oldest existing capitol building and it’s open to the public for tours. 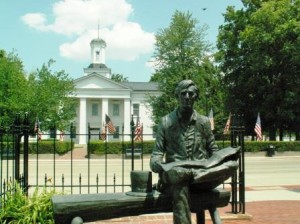 Vandalia’s first capitol building burned down, and the second was so shoddily built, walls were caving in after only thirteen years. A stipulation to get funding for the third structure was that it had to be completed within four months.

With no time to wait for architects to design a building, a team of local contractors was hired. Townspeople pitched in. A pile of stones down the road that were to be used for the new National Road were used for the foundation. (They later compensated for taking the stones.) The deadline was made, finishing by December 3, 1836, only 89 days from the start of construction. The building, with outside walls four bricks thick and inside walls three bricks thick, 367,000 bricks total used in its construction, still stands 178 years later.

Some things were never changed, like the doors. The key to the door is about eight inches long. 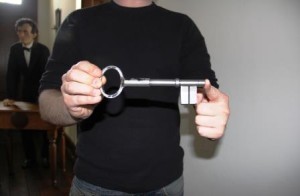 The pre-bearded Abe seems to have reappeared in the building, even though he was one of a group of nine who lobbied to have the capital moved to Springfield. 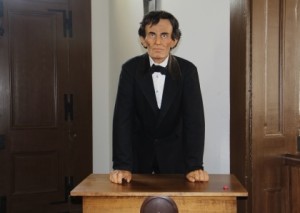 The building has been furnished with mostly period furniture, four pieces original to the building, and many replicas. On the first floor you’ll see the State Treasurer’s office, including a zinc strongbox that held deeds, pay warrants and cash. 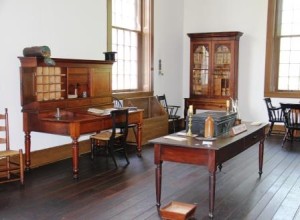 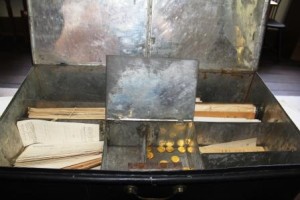 The duties of the Secretary of State back then, besides hand writing all of the state laws, were to clean the furniture, supply ink and fix anything that broke. Secretary of State employees sat around a table like the one below. Completed documents were folded, tied with string, and put into the cubbyhole drawers of the cabinet seen at the back. 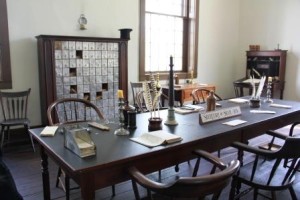 The desk pictured below was made for the state’s fourth governor, John Reynolds, in office from 1830 to 1834, although he worked very little in the building. In fact, the governor didn’t have an office in the capitol building. He mainly worked from home. 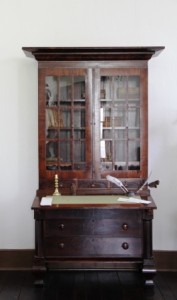 The Auditor earned the highest wage of anyone in the building, $800 per year, and his office was the busiest.  State employees would pick up their pay warrants (paychecks) here and take them across the hall to the Treasurer’s office to cash.

The wood stove in the Auditor’s office is one of only two originals in the building. 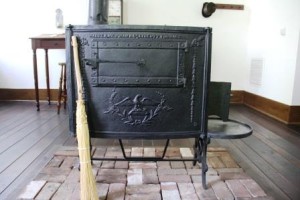 The Supreme Court chamber is where Chicago received its charter and Lincoln received his law license, after already having been a state representative for three years.

The general assembly rooms were on the second floor.

The representatives sat at long tables. Only one of the tables is original, one that was found in a barn of a local farm. Documentation as to where it came from was found in a drawer. The rest of the tables are replicas, but it is believed that the table pictured below is in the location in which Lincoln sat. It was from this room that Lincoln first spoke out against slavery. 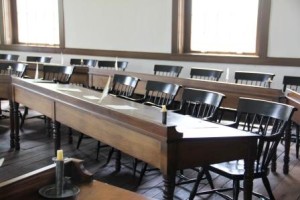 Senators had individual desks instead of a single long table. 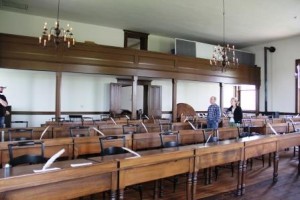 Restoration on the building continues, but one thing that won’t be restored is the color. Originally the building was red brick. It was painted white while used as the county courthouse. Since removing paint after it has been on the building for so long could cause the bricks to deteriorate, it will remain white.

The building is small in comparison with modern day capitol buildings, and day-to-day business that took place there is mostly long forgotten. However, in that small building, in the short period of time it was used as the state capitol, the beginning of one of the nation’s largest cities took place. More importantly, the beginning of the end of the horrible practice of slavery happened here, thanks to then Representative Lincoln, who was to become, arguably, the nation’s most revered president.

Hours of the Vandalia Statehouse, located at 315 W Gallatin, Vandalia, Illinois, are seasonal. Check the web site for details.

Thank you for reading Midwest Wanderer. Don’t miss a post. Enter your e-mail address below and click Subscribe to be notified whenever I publish another post. Subscription is FREE. After subscribing, be sure to click the link when you get the e-mail asking you to confirm.– Connie

Before this summer, I knew little about Wild Bill Hickok. Then, within just a few weeks, we visited three places within Kansas and Illinois that all shared Hickok stories—quite a coincidence. I learned several fascinating facts about him. Here are END_OF_DOCUMENT_TOKEN_TO_BE_REPLACED