1843 was a big year for Delphi, Indiana. That was the year the Wabash and Erie Canal reached the Lafayette and Delphi settlements. They could now export products they produced—mostly agricultural products— to the east within a couple of weeks. They could also import needed tools, supplies, and cultural products like pianos. Within a few decades, however, the railroads came through. Faster than donkeys could tow a boat and able to run year-round, trains took over the transportation industry. Canal boats became obsolete.

Today the Wabash and Erie Canal is active again in Delphi, albeit for just the distance it takes for visitors to experience a short replica canal boat ride. In addition to the boat ride, an interpretive center filled with hands-on exhibits, a reconstructed 1850s village, and walking trails add to the canal experience. 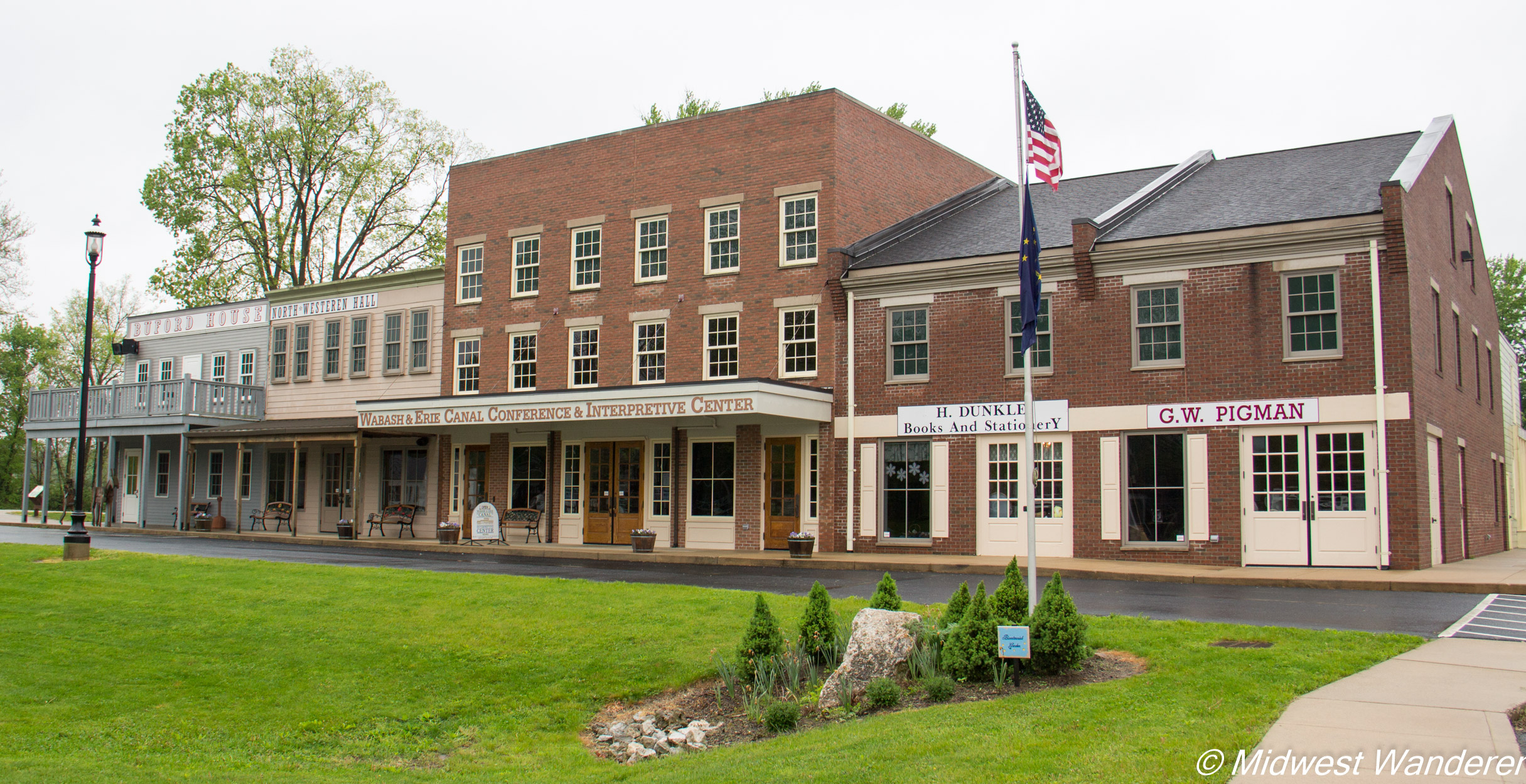 By the time Dan was born, however, the canal was no longer used for transport or industry. Rather, it was filled with stagnant water, covered with algae, and became a mosquito breeding haven.

Through a completely volunteer project, the Wabash and Erie Canal Association cleaned up the canal and built a wonderful educational tribute to the past. In addition to all of the association’s work, a local stone quarry now releases three million gallons of clean water into the canal daily, eliminating the foul smell the canal once emitted, and eliminating the big mosquito problem.

The Wabash and Erie Canal Museum is geared toward fourth-grade students, since Indiana fourth graders study Indiana history. However, it’s appealing to children and adults alike. I like interactive exhibits as much as kids do!

The museum galleries take you through a timeline, starting with Native American inhabitants and going through the building of the canal, canal usage, and the introduction of railroads. It demonstrates what life was like in Delphi in the mid-1800s.

A large model of locks show how locks were built. A hands-on model of the canal and lock systems explains how water levels need to be raised and lowered as a canal boat travels through the canal system. 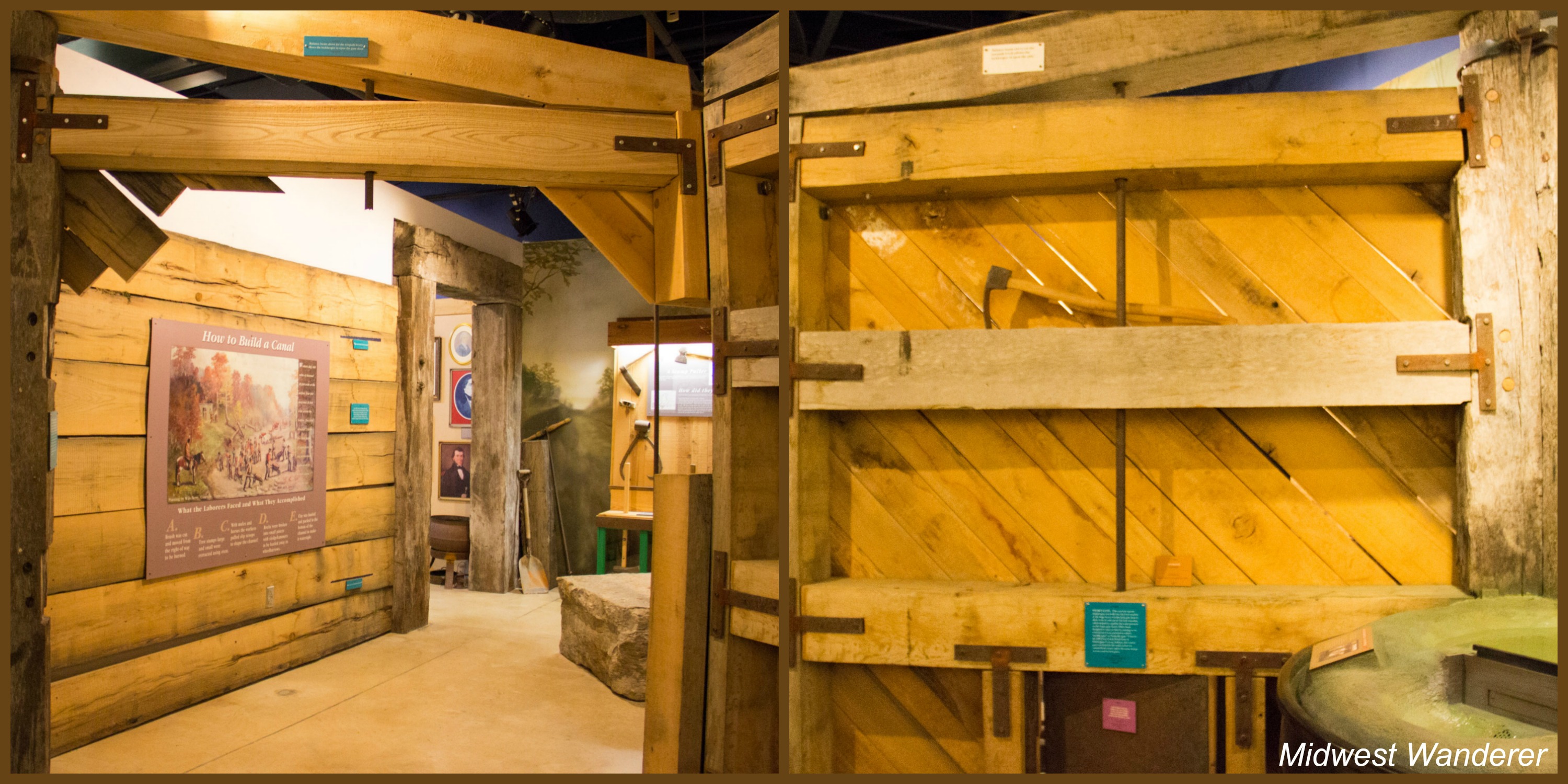 Another exhibit is a canal boat. It’s built on truck airbags, so when you step into it, you get the sensation that you’re on water. Kids are encouraged to climb up on the beds or sit down and play a game of checkers. 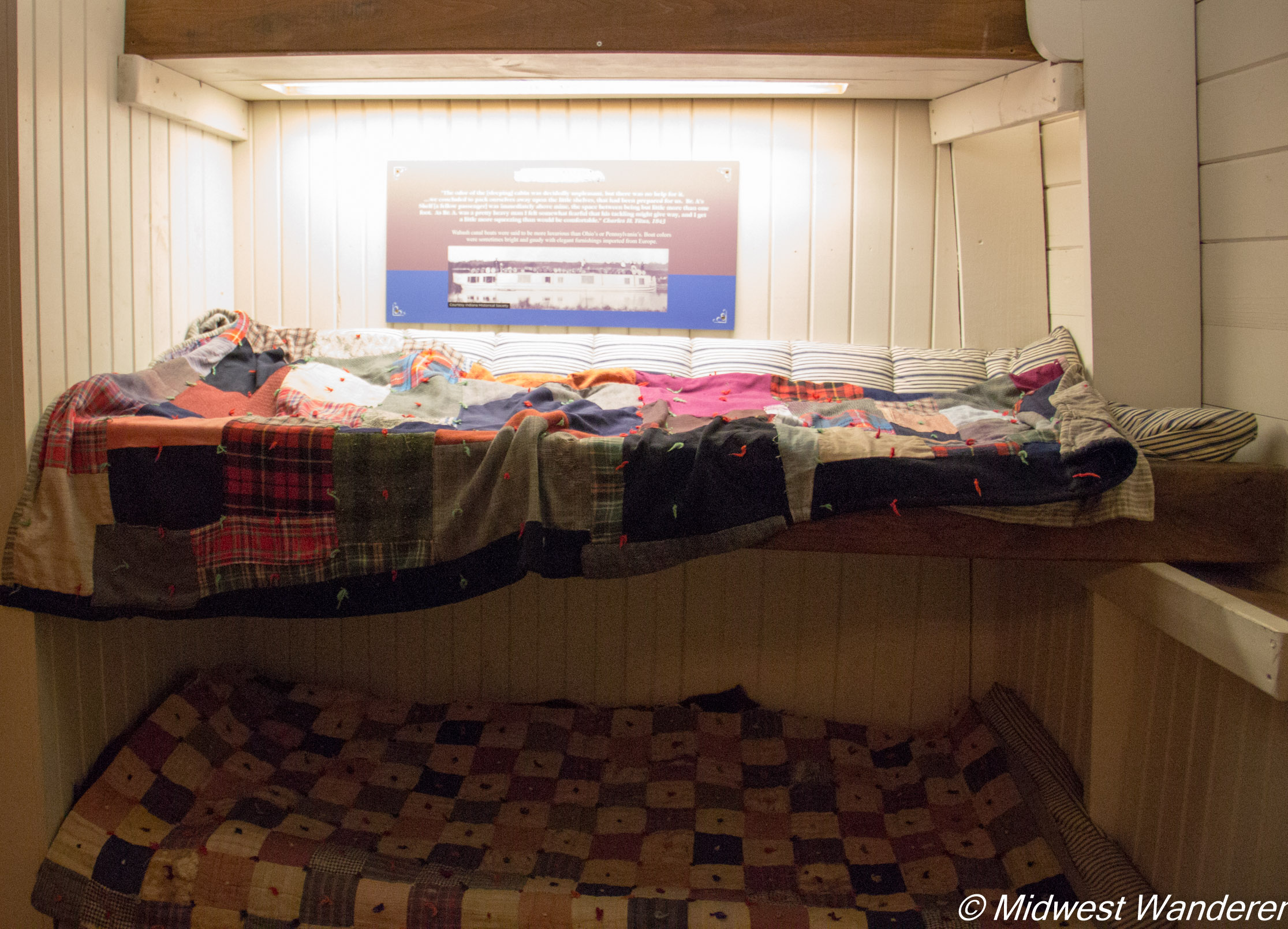 A model kiln demonstrates the way limestone was put into the top of a kiln. The kiln would heat the rock and decompose it. In time, the limestone breaks down into powder. The powder is then used to make plaster. 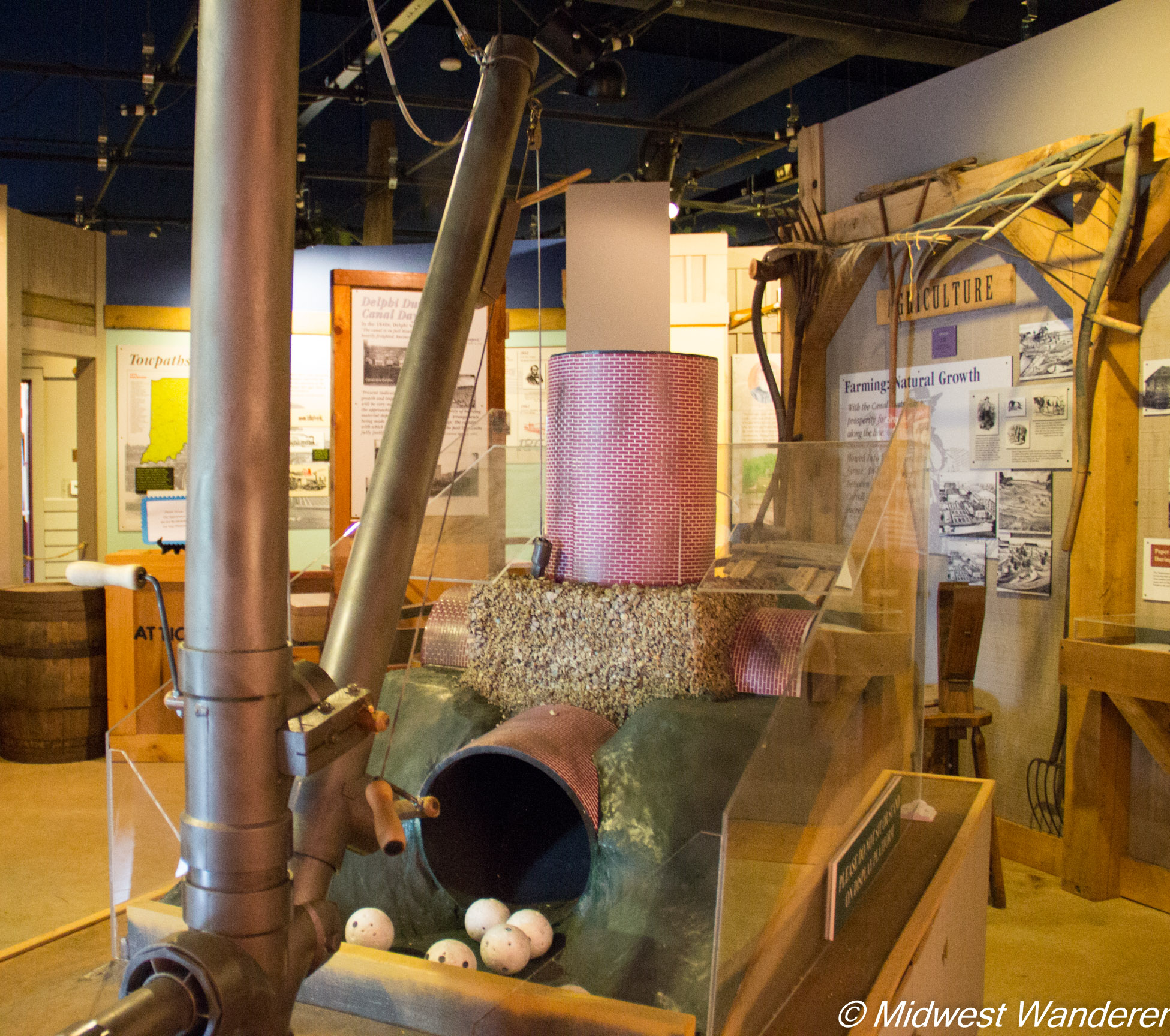 Outside the interpretive center, a series of log buildings reconstructs an 1850s village. A play canal boat replica is popular with kids. Cross the bridge on the trail and advance two generations, to an 1890s church. You can continue on that trail, one of a series of Delphi’s ten-mile trail system.

Canal boat rides begin in mid-May. Since we visited pre-season, we didn’t get to ride in the boat. However, Dan McCain took us over to the boat house to see the two-thirds size replica canal boat. This 32-passenger boat isn’t towed by donkeys or mules, as they were in the 1800s. Towpaths are now blocked by bridges, which would require unhitching and re-hitching several times along the canal. The replica boat runs on twenty 6-volt batteries, which last the full weekend. 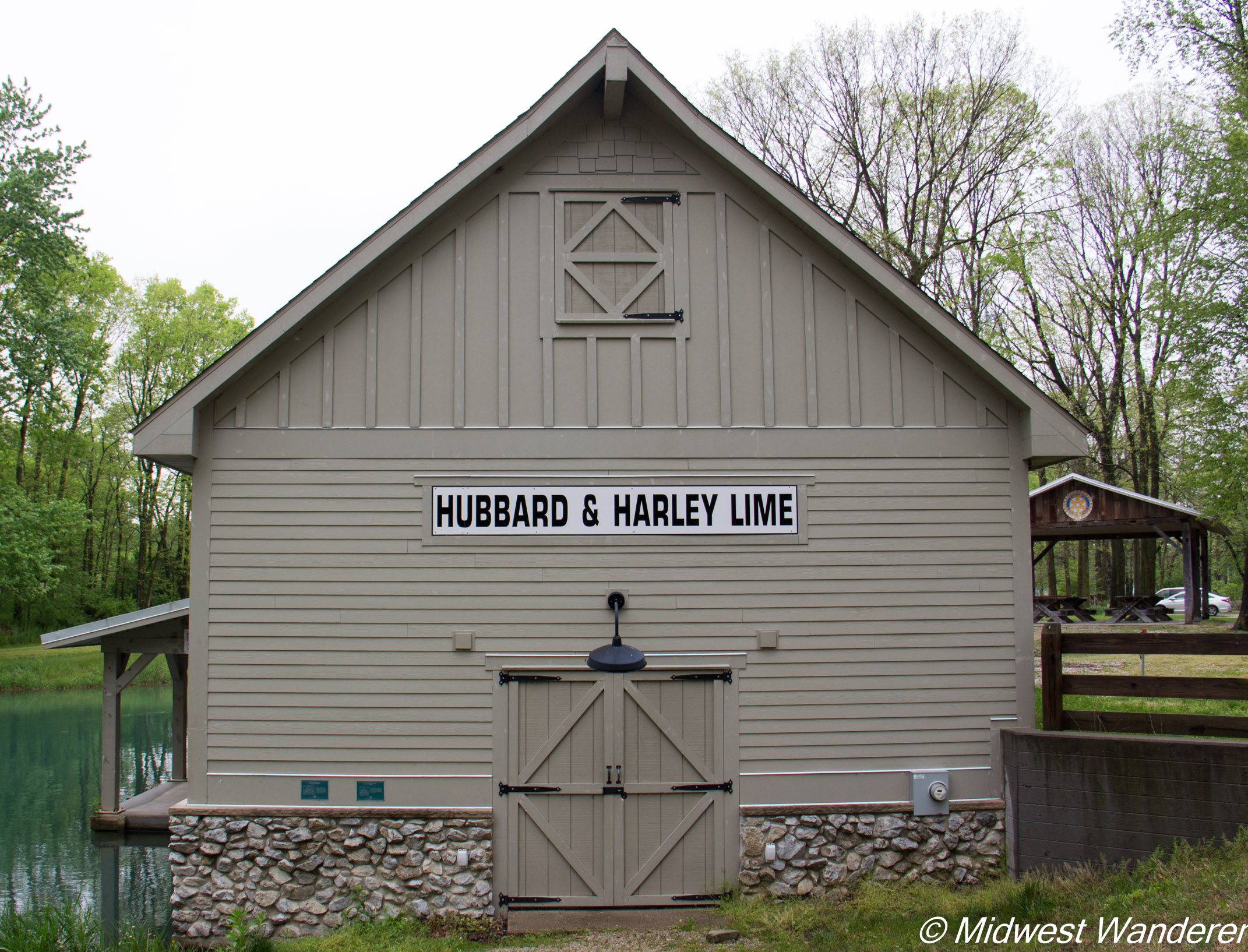 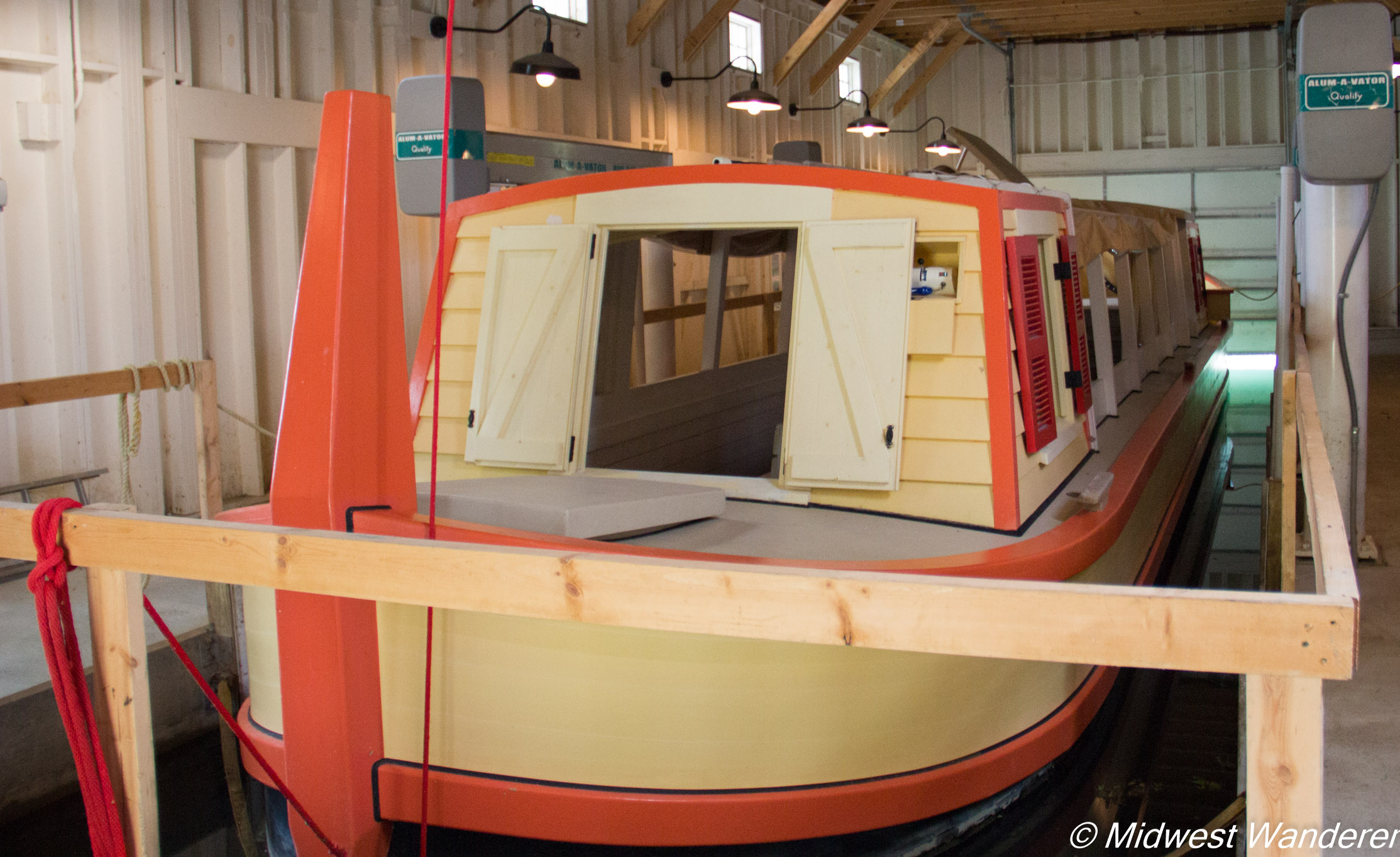 While at the boathouse, Dan pointed out an 1873 bridge that the Wabash and Erie Canal Association secured from Camden, Indiana. They moved the bridge, repaired it, and reconstructed it near the boathouse. 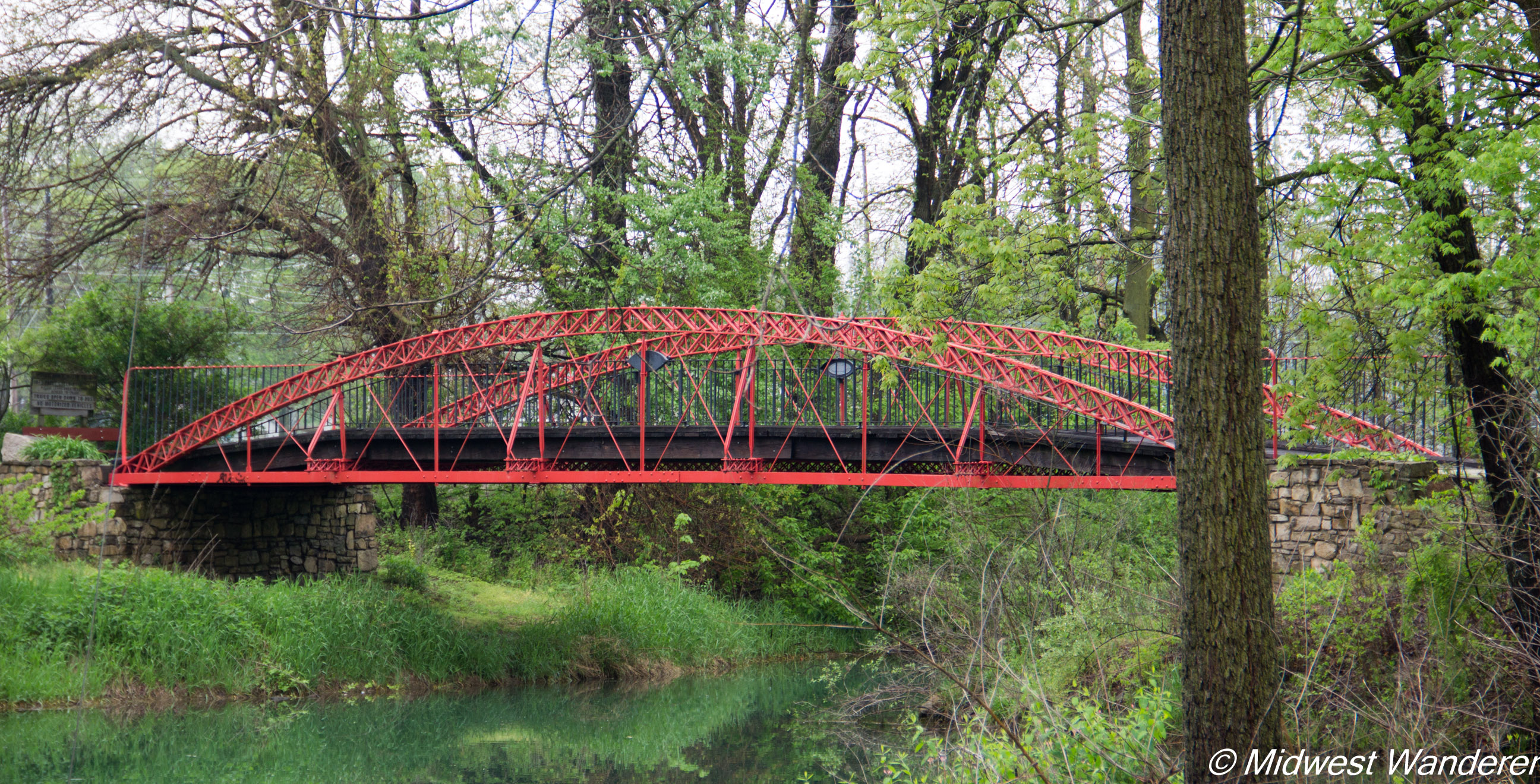 In fact, there are a total of four historic bridges on the property. Here’s another: 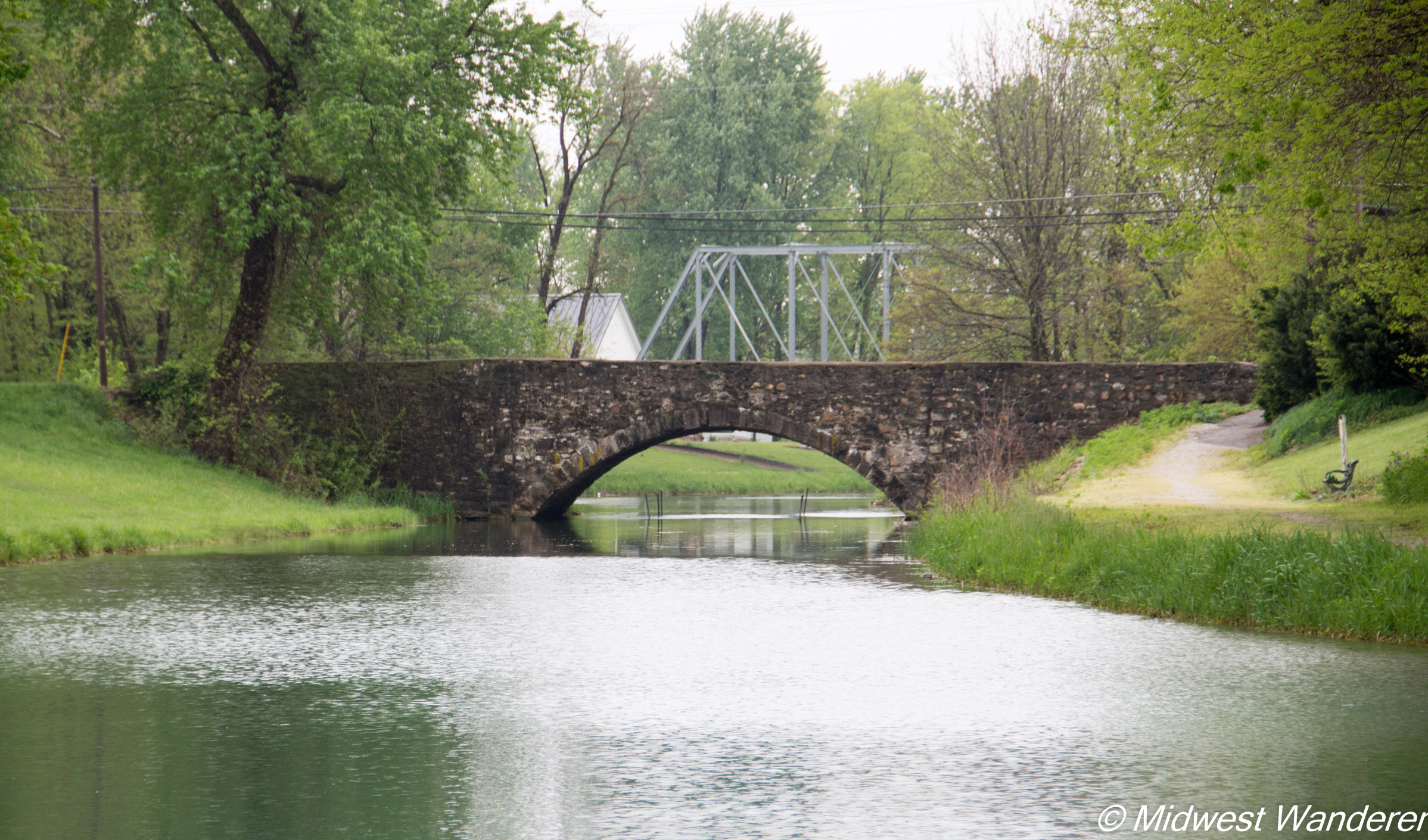 Dan also showed us a kiln left from his great-great-grandfather’s business, which is in process of being restored. 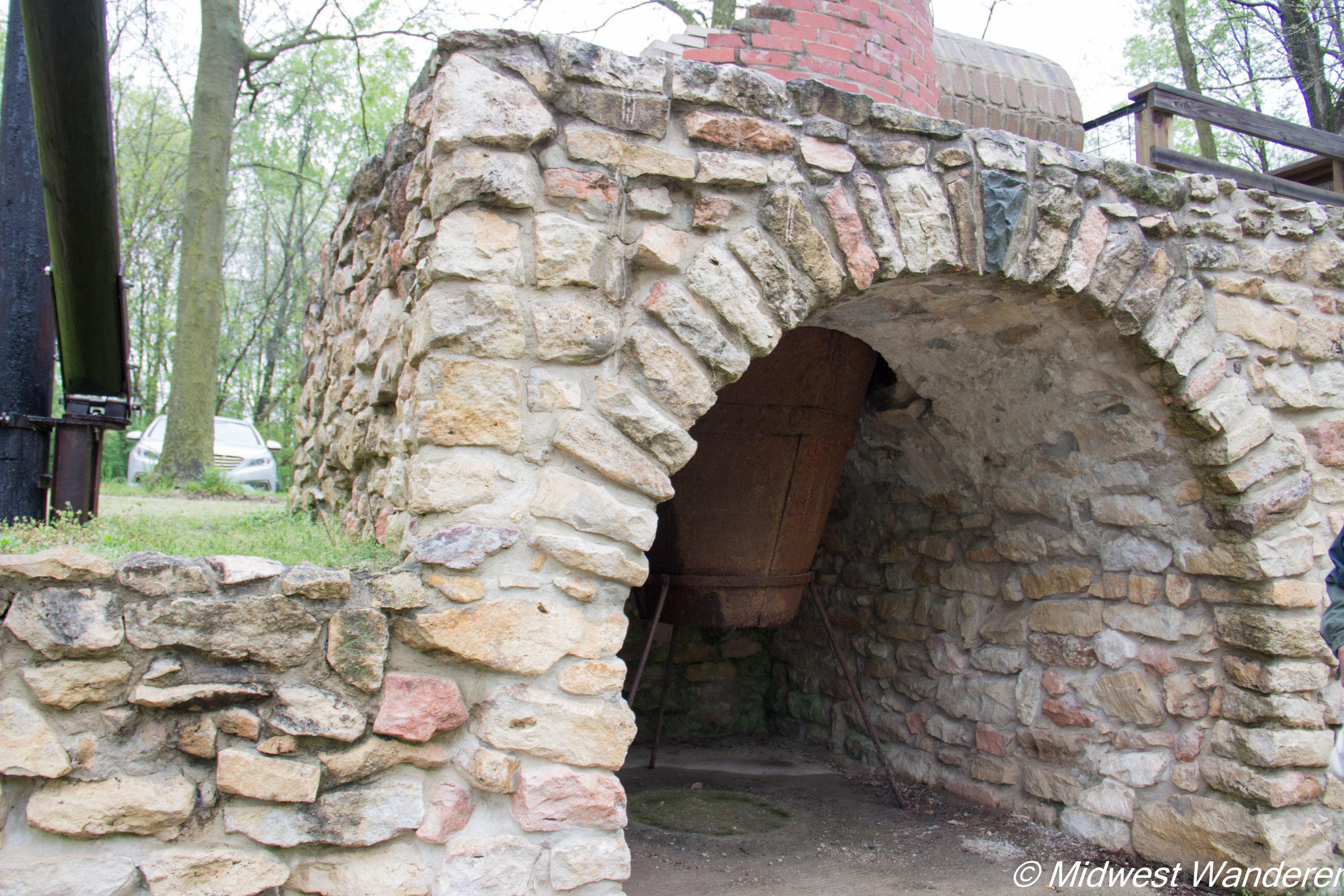 Outside the boathouse, a horse trough and water pump offer another hands-on activity. What child (or adult) doesn’t love to pump until water starts to flow? 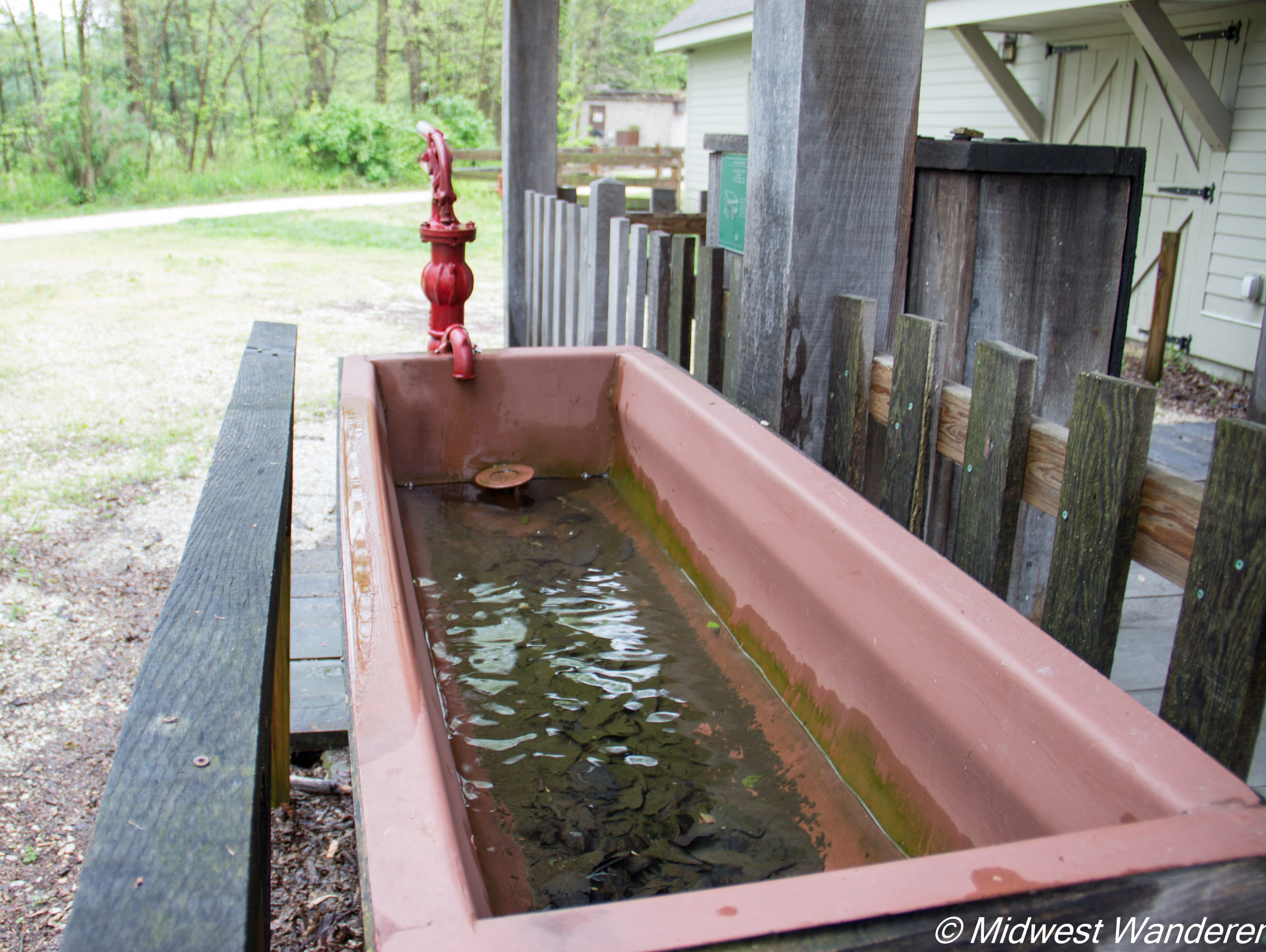 If you visit the Wabash and Erie Canal

Campsites are available at the Wabash and Erie Canal. We stayed at the Homewood Suites by Hilton Lafayette during our visit the area. Check room rates. 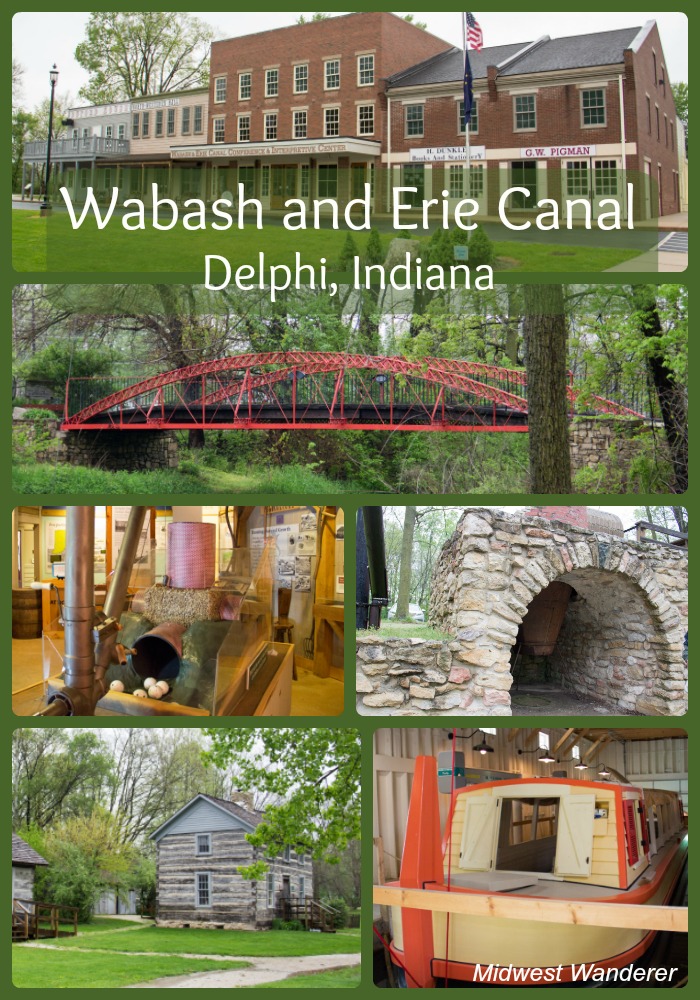 Disclosures: Visit Lafayette-West Lafayette hosted our visit to the area. Our admission to the Wabash and Erie Canal Interpretive Center was complimentary. However, any opinions expressed in this article are my own.
This article contains an affiliate link. If you book at hotel room through the “Check room rates” link above, I will receive a small commission at no additional cost to you.

2 thoughts on “Experiencing the Historic Wabash and Erie Canal”

Before this summer, I knew little about Wild Bill Hickok. Then, within just a few weeks, we visited three places within Kansas and Illinois that all shared Hickok stories—quite a coincidence. I learned several fascinating facts about him. Here are END_OF_DOCUMENT_TOKEN_TO_BE_REPLACED