Whenever we stumble across a lighthouse, I have to take a photo. There’s something romantic about lighthouses, perhaps the beacon of light welcoming sailors into a harbor or warning them of hazards. Maybe it’s the romanticizing of the keeper’s job, as backbreaking as it was. Or maybe it’s just that the splash of color—often red—against the blue of the sky and water makes a great scenic photo. Having taken the photo of the beacon that stands at the end of a pier in Michigan City, Indiana, we were surprised to find the light keeper’s house, the original Michigan City lighthouse. Refurbished, it’s now a museum run by the Michigan City Historical Society. We visited the museum earlier this year and came away with several fascinating facts about the lighthouse and the city during our self-guided tour. Here are 13 of them:

The Keeper’s House and Tower

1. The keeper’s house was rare in that it housed both a keeper and an assistant keeper. The original house, built in 1837 was a single residence. A remodel in 1904 turned the house into a duplex. 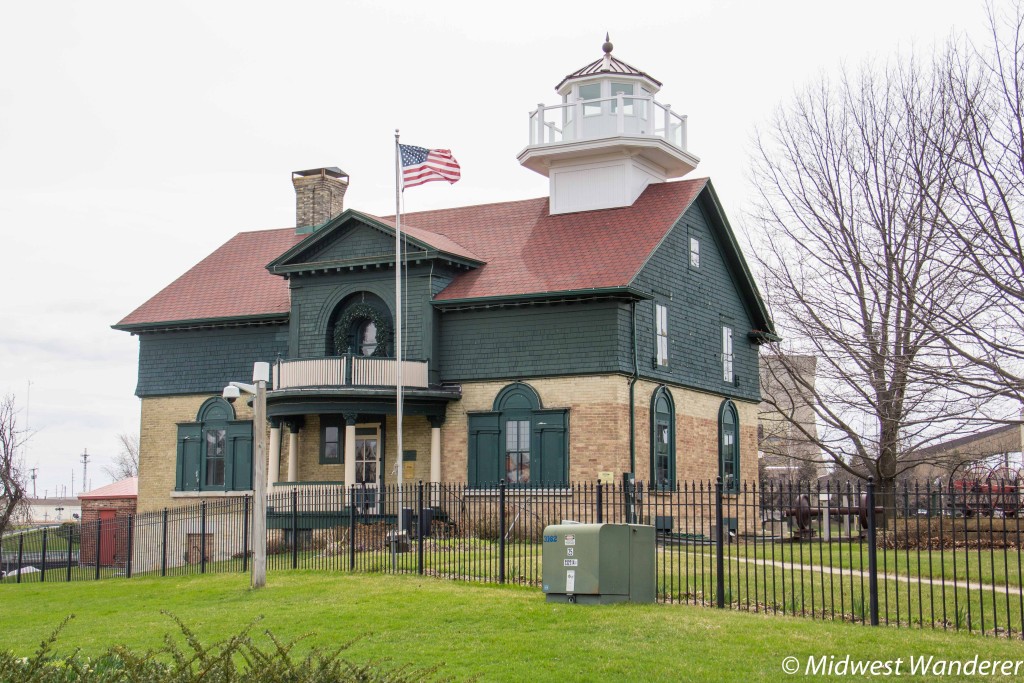 2. The lantern was originally on top of the house. After the remodel, the lantern was moved to the end of the pier, where it still exists today. A replica of the original lantern tower was placed on the house roof in 1973, the year the building was reopened as the Old Lighthouse Museum. 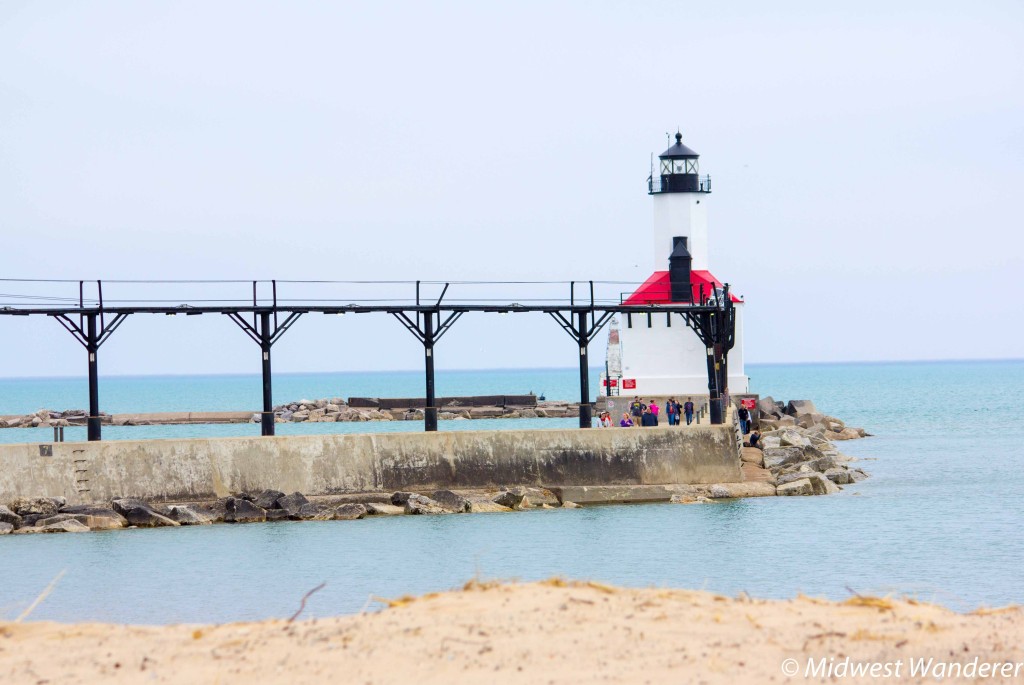 3. A female, Harriet Colfax, was lighthouse keeper from 1861 to 1904, an unusual position for a woman at that time.

4. Climb the spiral staircase to the tower for a view of Lake Michigan, as well as the lookout tower erected in the Washington Park Zoo as a Work Projects Administration (WPA) project during the depression. 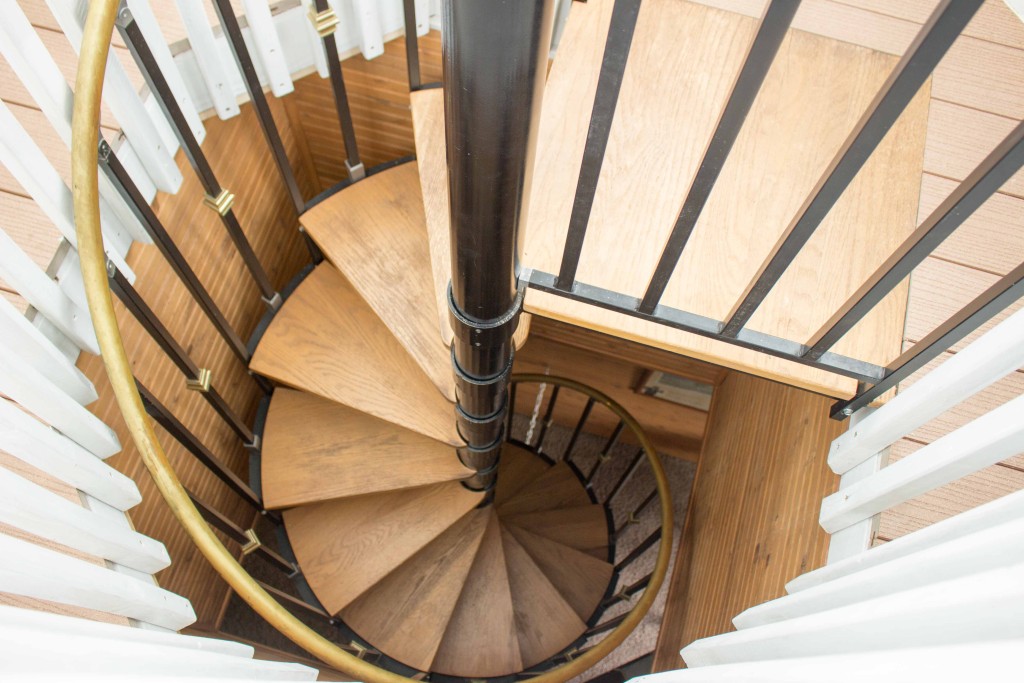 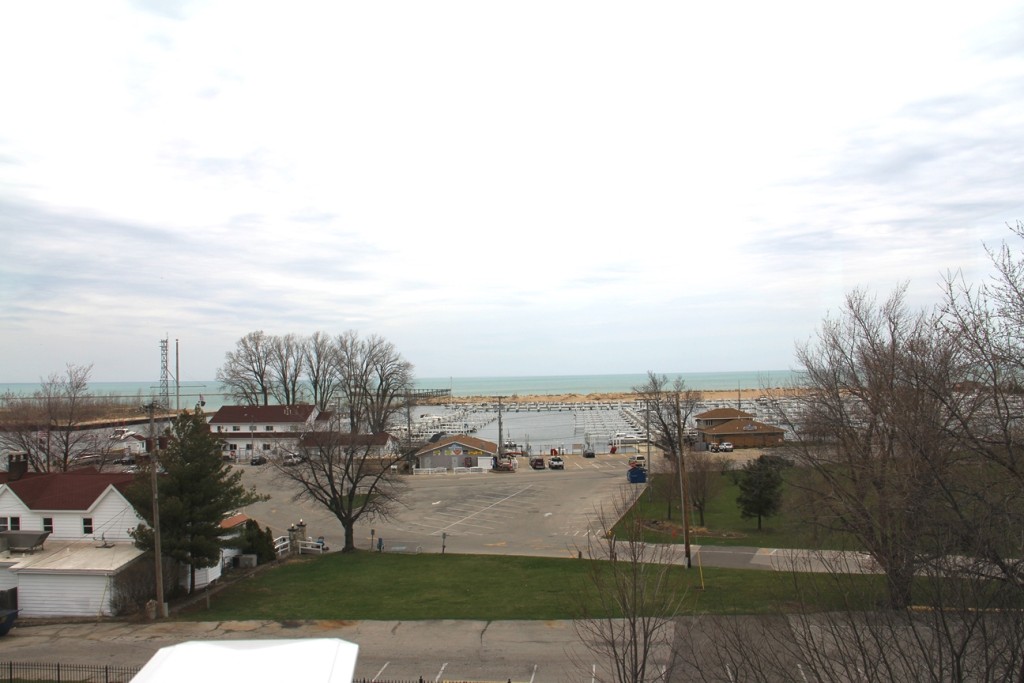 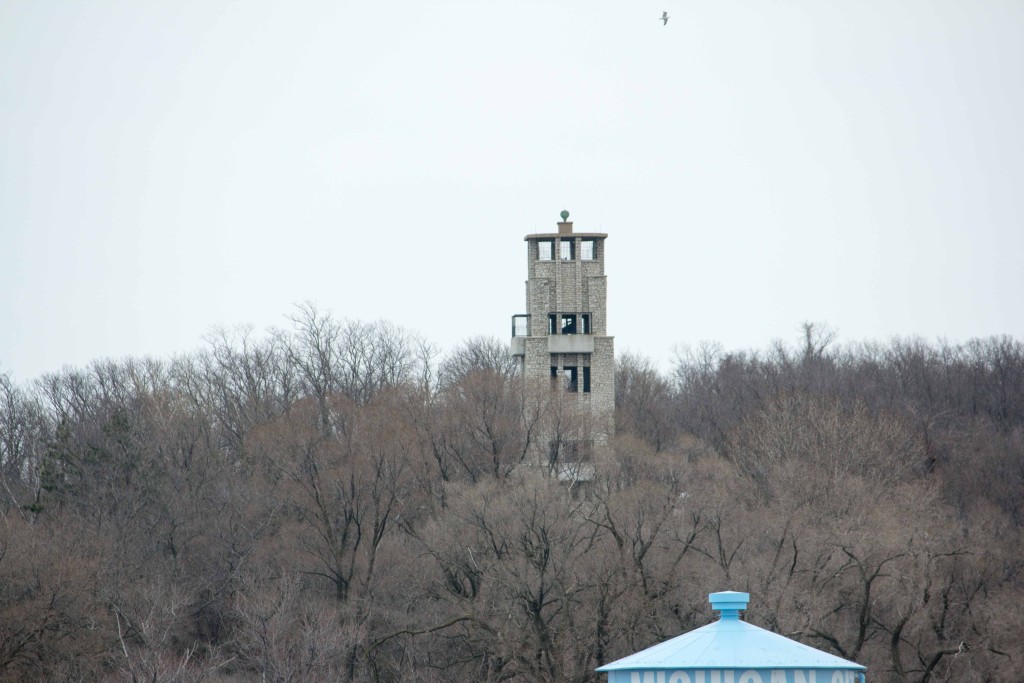 6. The Coast Guard took over the lighthouse service in 1939 when the last keeper, Walter Donovan passed away. The building was closed in 1940 when the assistant keeper retired.

7. According to the U.S. Environmental Protection Agency, the Great Lakes storms are more difficult to navigate than ocean storms. I knew there were a lot of shipwrecks but didn’t realize the great numbers of them. This map indicates documented shipwrecks at the southern tip of Lake Michigan, mostly in the late 1800s. 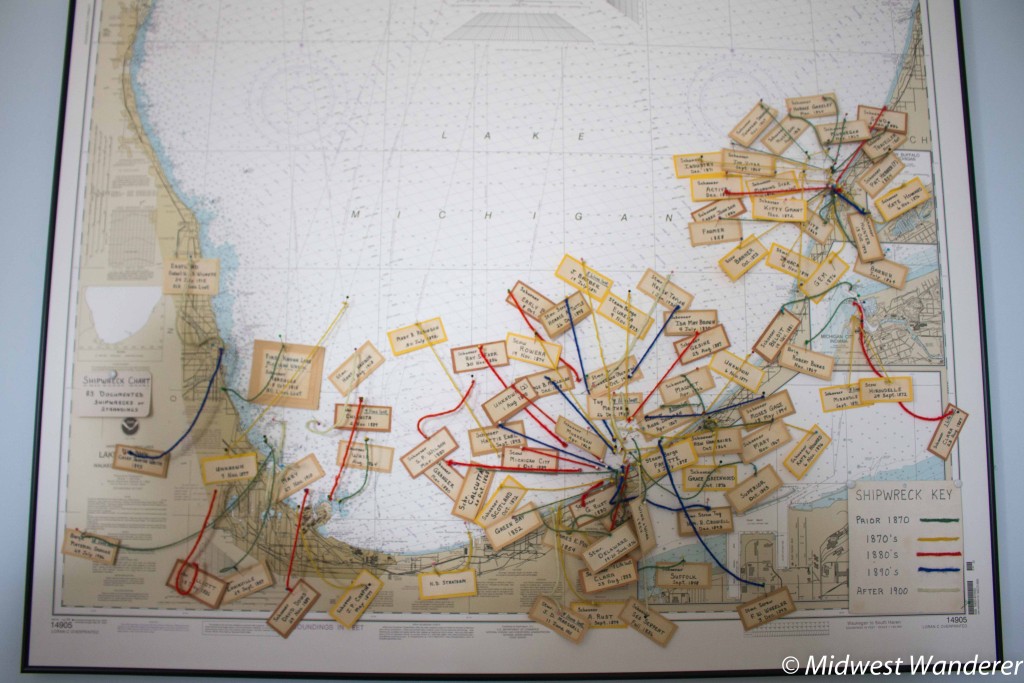 8. I had also known about the SS Eastland Disaster but wasn’t aware of the connection to Michigan City. Employees of Western Electric in Cicero, Illinois, were scheduled to take charter tour ships from Chicago to a company picnic in Michigan City in July 1915. The crowds gathered on the upper decks of the Eastland, and the top-heavy ship rolled to its side while still tied up in the Chicago River. Eight hundred people perished in the disaster.

9. The Abraham Lincoln funeral train stopped in Michigan City on May 1, 1865. Local residents made breakfast for the train crew. Others brought armloads flowers to the train. The museum includes a Lincoln display. Among the items is Lincoln’s life mask. Lincoln sat through four molds of his face, something commonly done with famous people of his time. 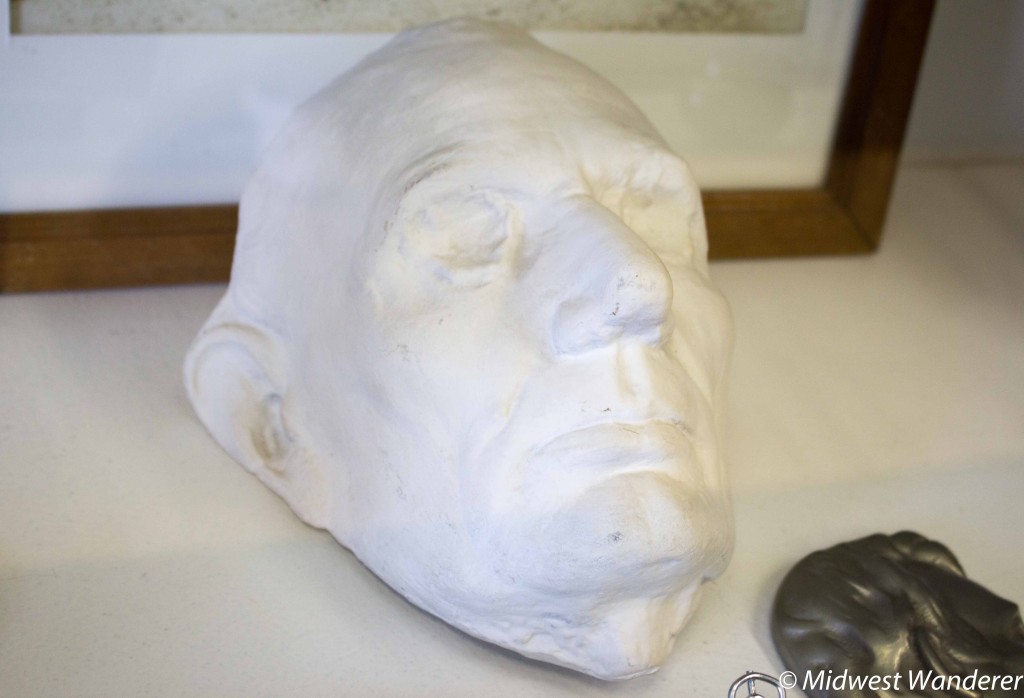 10. A huge sand dune called the Hoosier Slide was mined away for glass making. This witch ball was made in the local glass factory. 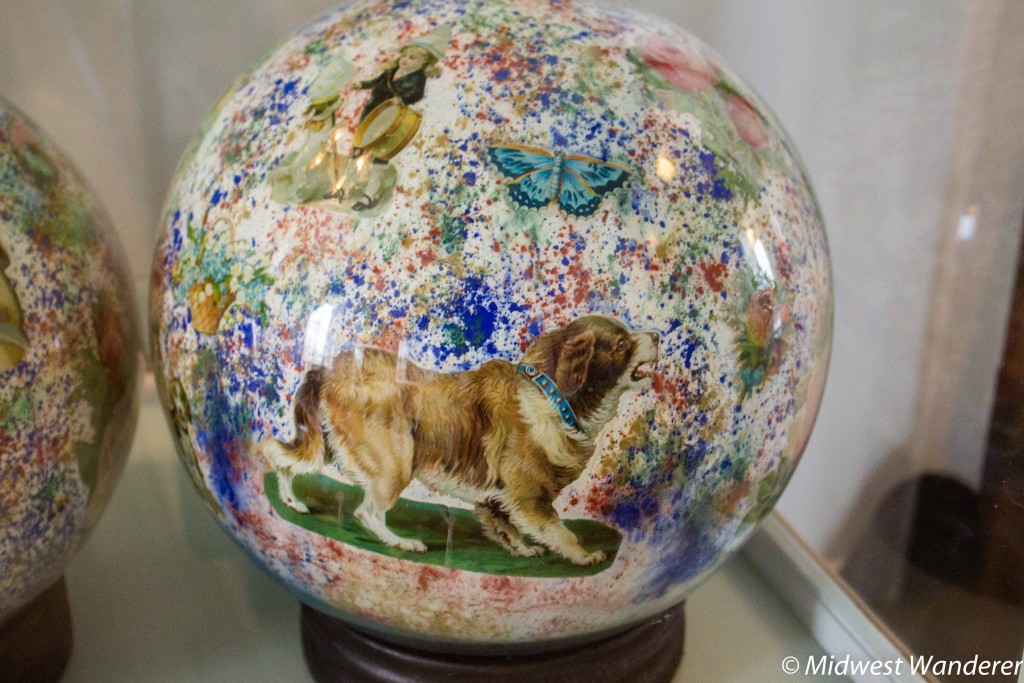 11. Many other manufacturing firms existed in Michigan City, as well. Those who are old enough will remember the black licorice-flavored Smith Bros. cough drops. 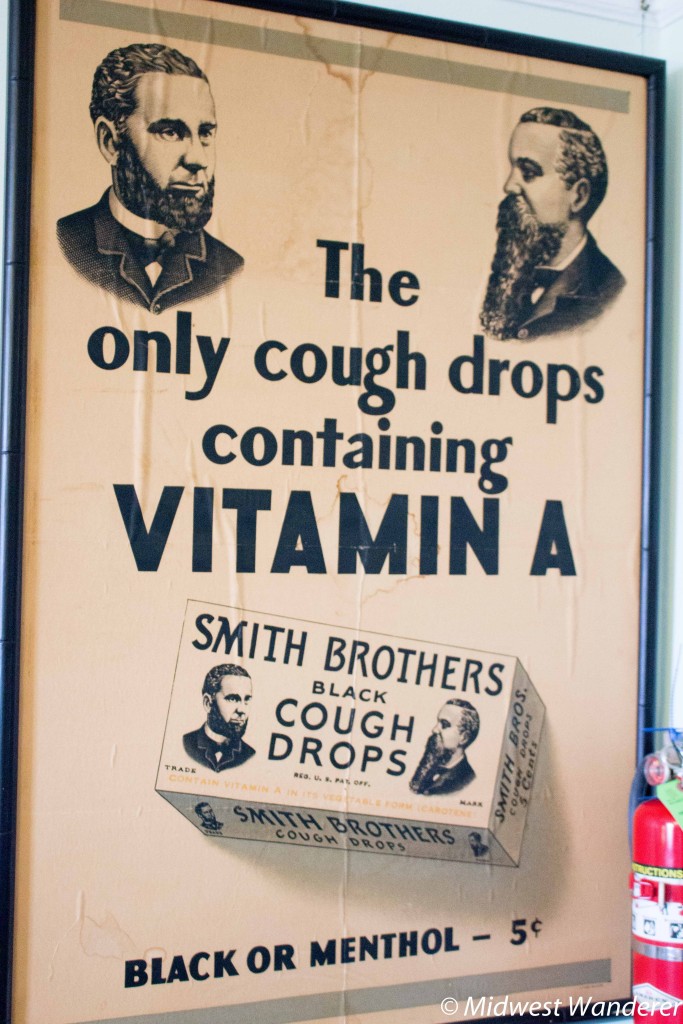 12. Another Michigan City factory built these unique cradles that you could roll out to the field as you did your outdoor work. It came equipped with runners that worked as a sled on frozen ground. 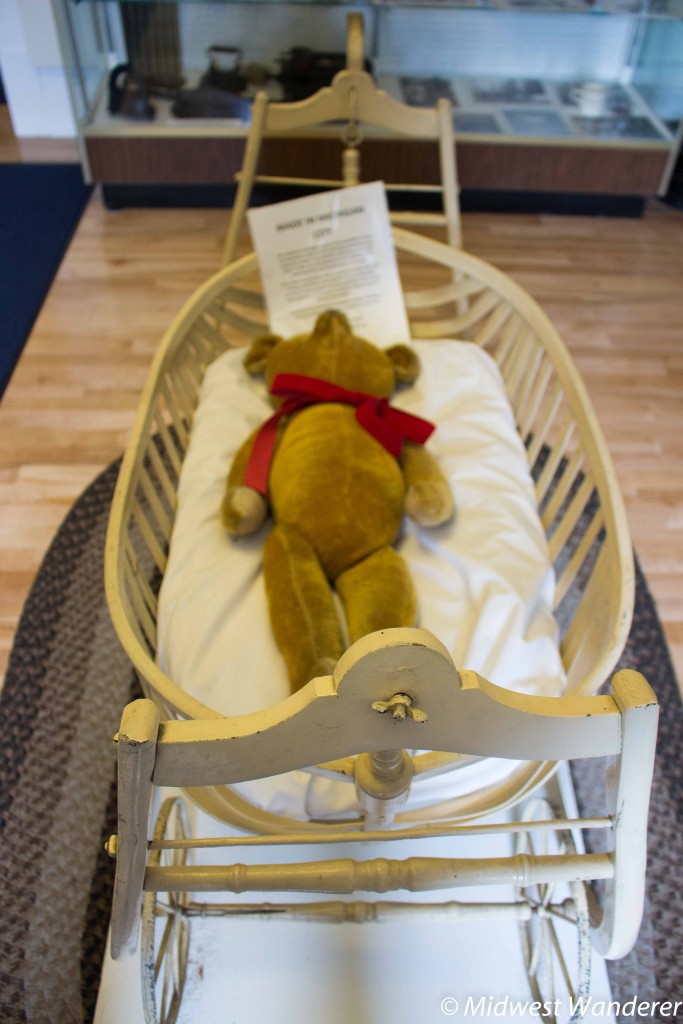 13. The South Shore Railroad, which still runs today, is the last inter-urban electric train in the country. The train begins in South Bend, Indiana, and stops in Michigan City before making its way to Chicago. Commuters make the trip five days a week, for over one million rides per year.

Because the lighthouse keepers provided their own furnishings, none of the furnishings in the museum are original to the building. Individuals have donated items on display, unrelated to the lighthouse, but good examples of Michigan City’s past.

The Old Lighthouse Museum, located at 1 Washington Street in Michigan City, Indiana, is open April through October every day except Monday from 1 p.m. to 4 p.m. Central Time. Check the web site for admission fees and further details.

Other articles that may interest you:

Before this summer, I knew little about Wild Bill Hickok. Then, within just a few weeks, we visited three places within Kansas and Illinois that all shared Hickok stories—quite a coincidence. I learned several fascinating facts about him. Here are END_OF_DOCUMENT_TOKEN_TO_BE_REPLACED