“There won’t be someone chasing you with a chain saw on this tour.  This is the real deal,” said Len Adams, head tour guide for Alton Hauntings Tours, during his pre-tour talk. 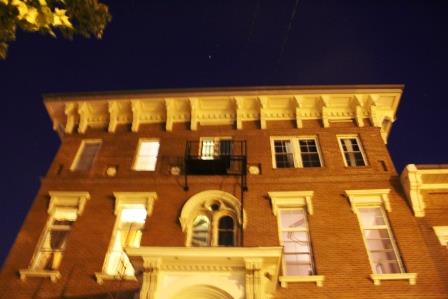 The Alton Hauntings walking ghost tour took us to sites of Alton’s dark history. Many of these sites were once rampant with disease and death, murder and mystery. Len related occurrences that may explain the apparitions and anomalies that many have claimed to have witnessed.  After taking this tour, I understood why Alton, Illinois, is considered to be one of the most haunted small towns in America.

The first stop on our tour was the Enos Apartments, a former station on the Underground Railroad.  Many tenants have broken leases here after they’ve witnessed apparitions.  We didn’t go into an apartment, but we did go into the underground limestone room where runaway slaves were hidden.  Limestone, ubiquitous in Alton, absorbs energy because of the high quartz content, Len explained. With heightened emotions associated with the Underground Railroad, that energy remained behind, absorbed into the limestone, long after the bodies were gone.  Len turned the lights off. In the dark he told of paranormal activity that has taken place here.  We all waited for an occurrence and took pictures, hoping a ghost might appear in them. It didn’t happen. 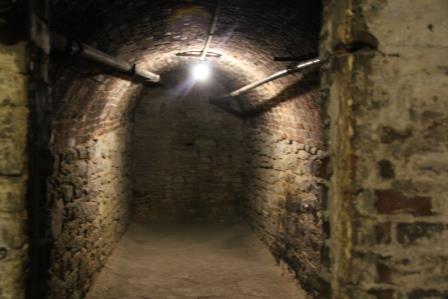 Len led us to several other haunted sites around town, including a building moved there from the 1904 World’s Fair, a restaurant, and the Mineral Springs Mall.  A woman met an untimely death in the former Mineral Springs Hotel, Len said. Occasionally some people can smell her jasmine perfume as they stand on the sidewalk where we stood.  I inhaled—nothing.  I inhaled again, and there it was, strong as could be, a sweet, flowery aroma.  The next second, it was gone.  No one else seemed to notice.  I looked around for flowers in the area.  I found a flowering bush and smelled it, but the scent was not nearly as strong or as sweet as what I had experienced. 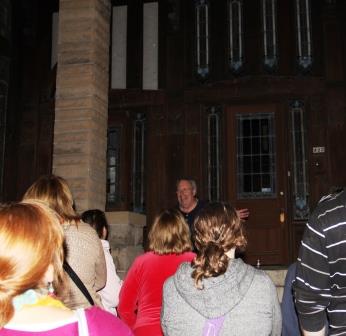 We worked our way to the Confederate prison, which had previously been a state prison. The state prison had closed due to deplorable conditions. Smallpox broke out in the Confederate prison, and thousands of people died.  The building is gone now, but one wall was kept as a memorial, and apparitions are often seen here. We saw no apparitions, but being out there in the dark, off the street, was in itself a little freaky.

The tour concluded at the First Unitarian Church. Len wanted to save the best for last. I won’t tell the story and ruin it for you. You’ll find out for yourself on the tour.  Let’s just say I wouldn’t want to be in that church alone. 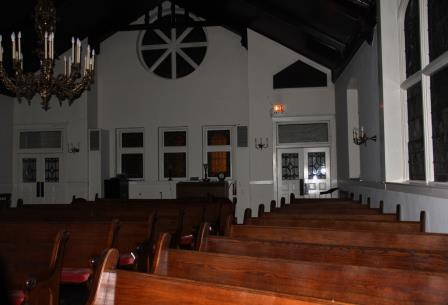 If you take the Alton Hauntings Tour

Alton Hauntings Tours was started by Troy Taylor, noted author of many books on ghosts, hauntings and the unexplained.  Len Adams, our guide, has co-authored with Troy Taylor and has written his own books, as well.  Walking tours, as well as bus tours, run from April through November.  Registration information is on the Alton Hauntings web site.  Alton, Illinois, is located on the Mississippi River, approximately 25 miles north of St. Louis, Missouri.

Haunted Illinois: Ghosts and Strange Phenomena of the Prairie State

Ghosts of the Prairie: History & Hauntings of Central Illinois

Find the best Alton hotel deal, compare prices, and read what other travelers have to say at TripAdvisor.

Disclosures: My Alton Hauntings walking ghost tour was hosted by the Alton Convention & Visitors Bureau and Alton Hauntings. My tour was complimentary; however, any opinions expressed in this article are my own.
This article contains affiliate links, which means that if you purchase a book or reserve a room through the links above, I will receive a small commission, at no additional cost to you.

Before this summer, I knew little about Wild Bill Hickok. Then, within just a few weeks, we visited three places within Kansas and Illinois that all shared Hickok stories—quite a coincidence. I learned several fascinating facts about him. Here are END_OF_DOCUMENT_TOKEN_TO_BE_REPLACED