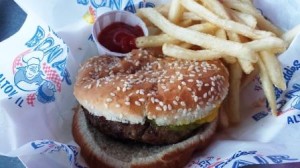 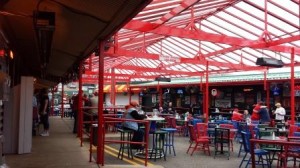 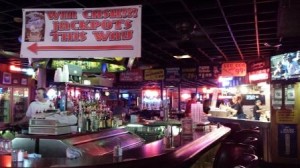 Temperatures were still warm, but autumn winds were beginning to blow. In many Midwest cities mid-October is late for parasailing. However, in Grafton, Illinois, 15 miles upriver from Alton, warmer weather hangs on a little longer. So when on my October visit I had the chance to go on the only parasailing adventure on the Mississippi River with Captain Andy’s Parasail, of course, I accepted. END_OF_DOCUMENT_TOKEN_TO_BE_REPLACED

National Pie Day is behind us for another year, but who needs a special day to eat pie?   My Just Desserts in Alton, Illinois, offers nine to thirteen different kinds of pies every day.

Ann Badasch started out selling antiques back when Alton boasted six blocks of antique shops.  As the antiques business began declining about 25 years ago, Ann switched gears, opened My Just Desserts, and has been serving customers a little slice of heaven ever since. 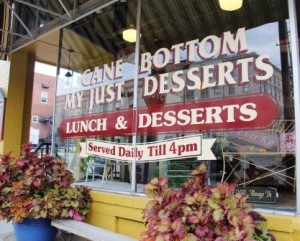 The atmosphere of an antique store still exists in the restaurant, located in a building over 160 years old, with creaking hardwood floors, quilts for sale hanging on the walls, vintage mismatched tables and chairs, beverages served in Mason jars. 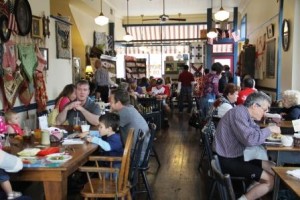 The food, though, is what people come for.  My Just Desserts is open for lunch seven days a week, serving soups, salads and sandwiches.  The half-pound Chicken Salad sandwich is so popular that the kitchen workers debone about 100 chickens a week, all done by hand.

With few exceptions, like the Chicken Salad and Tollhouse Brownies, the menu changes every day.  Ann’s 150 pie recipes are rotated weekly, so with nine to thirteen varieties offered at a time, you’ll be surprised with new pie selections with every visit.   I chose Lemon Truffle and enjoyed the tang of lemon offset by sweet creaminess and a light flaky crust.  Among the other pies available the day I was there were Caramel Apple, Radically Cherry, and Peaches and Cream.  Where does Ann get all of her recipes?  “Customers,” said Ann.  “I exchange a lot of pie recipes with my customers.” 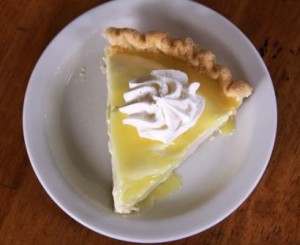 Because of the constantly changing menu, there are no printed menus.  Instead, the day’s offerings are written on chalkboards throughout the restaurant.  When a dish or a pie is gone, it is erased from the boards.  A tip that was given to me:  Order your pie when you order your meal to avoid disappointment if the pie your taste buds were set on is erased from the board before you finish your lunch.

Thank you for reading Midwest Wanderer.  If you enjoyed this post, enter your e-mail address below and click Subscribe.  Be sure to click the link when you get the e-mail asking you to confirm.

At 8’11.1″, Robert Wadlow was the tallest man who ever lived, according to the Guinness Book of World Records.  At birth he weighed a normal eight pounds, but due to a pituitary gland disorder, he grew quickly.  By the time he was eight years old, he was over six feet tall. END_OF_DOCUMENT_TOKEN_TO_BE_REPLACED

“There won’t be someone chasing you with a chain saw on this tour.  This is the real deal,” said Len Adams, head tour guide for Alton Hauntings Tours, during his pre-tour talk.  END_OF_DOCUMENT_TOKEN_TO_BE_REPLACED

Howard Steamboat Museum in Jeffersonville, Indiana, pays tribute to the Howard family and their steamboat building company. The tour combines a history of the ornate Edmonds and Laura Howard mansion and the shipyard located across the street, which the Howard END_OF_DOCUMENT_TOKEN_TO_BE_REPLACED