May 28, 2018, marked the centennial of the Battle of Cantigny. The centennial happened to coincide with Memorial Day, and Cantigny Park, in Wheaton, Illinois, marked the occasion with a ceremony in front of the First Division Museum.

What was the Battle of Cantigny?

The Battle of Cantigny was the first major American battle of World War I and one in which Robert R. McCormick, heir to the Tribune Company, participated. In the battle, First Division troops captured the German held village of Cantigny in France. The battle had such an impact on McCormick that upon his return home, he renamed his family estate “Cantigny.”

Today Cantigny Park is open to the public and includes the First Division Museum. The museum is dedicated to the U.S. Army’s 1st Infantry Division. The 1st Infantry Division is the oldest division of the U.S. Army, in service since its 1917 beginning. A tribute to all who have served, you’re immersed in the history of the 1st Division as you pass through the ruins of Cantigny, France, the beach at Normandy and the Vietnam jungles.

The museum went through extensive renovations in 2017. New features include interactive virtual reality exhibits in which you can experience military operations aboard a helicopter or M-2 Bradley fighting vehicle.

The Memorial Day centennial ceremony included laying wreaths in honor of all those who served at the Battle of Cantigny and throughout World War I. The ceremony ended with a pigeon release. A World War I encampment with reenactors and historic military vehicles were on exhibit in the park throughout the day. Watch the video below for ceremony highlights.

Besides the First Division Museum, Cantigny Park offers 30 acres of gardens, among the largest in the Midwest. In addition, you can tour the 35-room McCormick mansion. Visit the Cantigny Park website for details on exhibits and events.

Cantigny Park is located at 1S151 Winfield Road in Wheaton, Illinois. There is a parking fee but no admission for the First Division Museum, gardens, or mansion tour. The park also includes a picnic and playground area, as well as a restaurant.

Check rates and reviews of nearby hotels on TripAdvisor 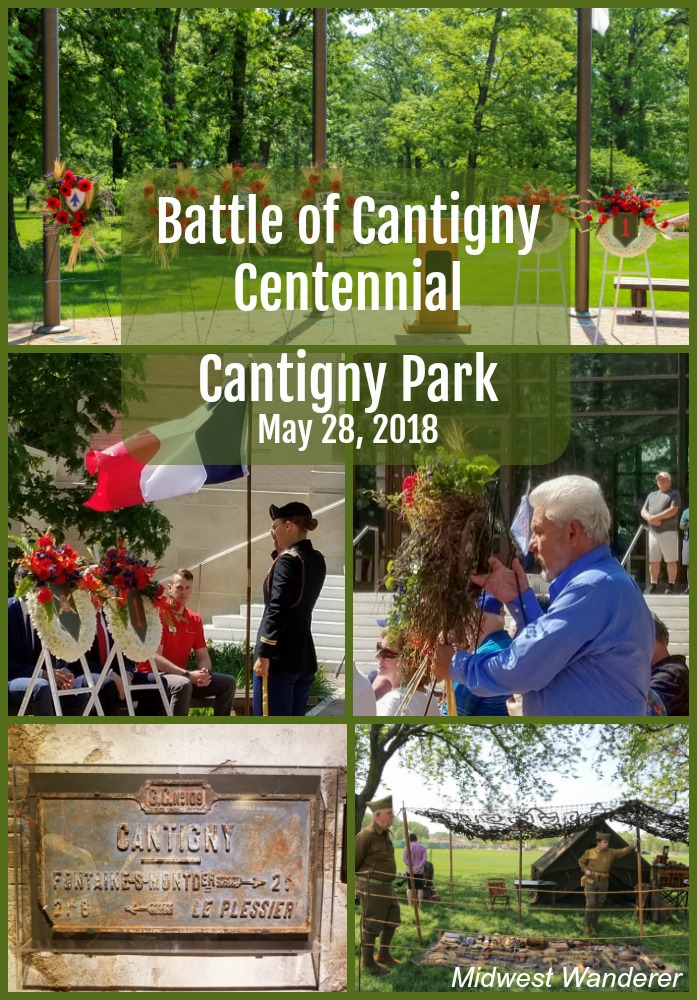 Air and Military Museum of the Ozarks: U.S. Military Heritage

Disclosure: This article contains an affiliate link. If you book a room through the “Check rates and reviews” link above, I will receive a small commission at no additional cost to you.

Before this summer, I knew little about Wild Bill Hickok. Then, within just a few weeks, we visited three places within Kansas and Illinois that all shared Hickok stories—quite a coincidence. I learned several fascinating facts about him. Here are END_OF_DOCUMENT_TOKEN_TO_BE_REPLACED