Iowa artist Ray “Bubba” Sorensen is on a mission to paint a mural honoring the military on a rock in every Iowa county and two in every state. We saw our first Freedom Rock last year in Pulaski County, Missouri, and this spring Skip stumbled across another one in Lake Mills, Iowa.

How the Freedom Rock project began

Ray created the first Freedom Rock® in 1999. He painted what he refers to on his website as a “simple thank you” to veterans on a 12-foot tall boulder along the highway in Adair County, Iowa. Since then, he has painted new murals on that rock every May before Memorial Day, donating his time.

When the rock in Adair County started attracting tourists, Ray came up with the idea of painting a rock in every Iowa county. The Freedom Rock Tour would continue to spread his message of thanking veterans and would also promote Iowa tourism. Since 2013, he has painted seventy-one rocks in Iowa.

Each rock is unique to its county and often includes portraits of notable local veterans. For instance, the Black Hawk County Freedom Rock in Cedar Falls pays tribute to the Sullivan brothers. The five brothers, natives of Black Hawk County, served together on the on the USS Juneau during World War II and were all lost at sea. Another side of the Black Hawk County rock honors Taylor Morris, a Navy veteran who lost parts of all four limbs while serving in Afghanistan.

The Freedom Rock that Skip stumbled across in Winnebago County includes a painting of Iowa’s former governor, Terry E. Branstad. Branstad, who today is the U.S. Ambassador to China, was the longest serving governor in American history. He served as Iowa governor in two stints and parts of six terms, for a total of 22 years, 4 months, and 13 days. He also served in the Army from 1969 to 1971 and was awarded the Army Commendation medal for meritorious service. The Winnebago County rock also pays tribute to Brigadier General Joseph M. Colby, who developed many of the tanks used by Allied armies during World War II and was known as “Mr. Tank.”

The rock is part of a larger veteran’s memorial that honors area fallen military. 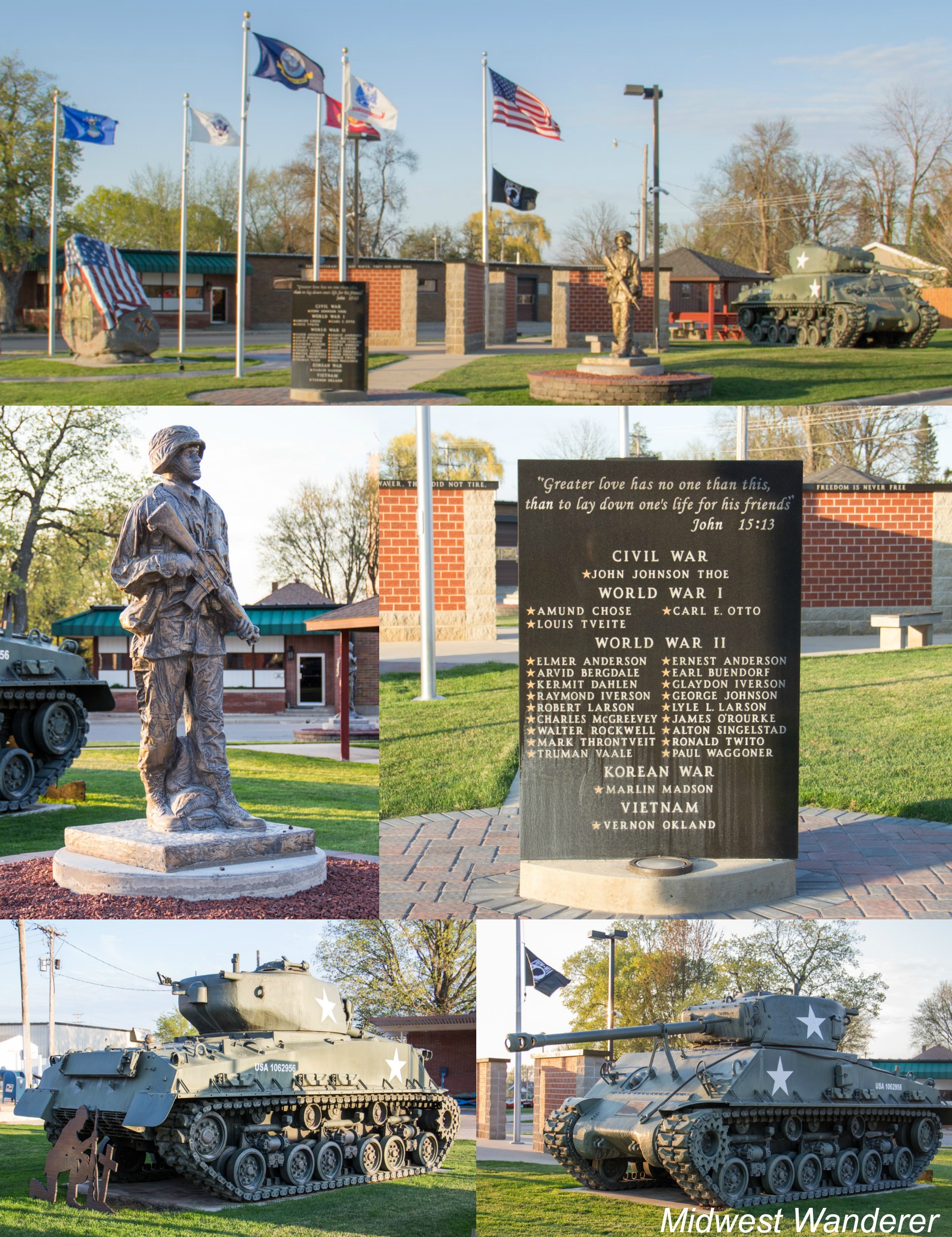 Besides the Iowa project, Ray Sorensen wants to paint a Freedom Rock in all 50 states. Besides Iowa, other states that already have rocks are Wisconsin and Missouri. In fact, Missouri has three rocks, and is where we first learned about the Freedom Rock project.

The rock in Pulaski County, Missouri, was completed just weeks before our visit there last summer. Since Pulaski County is home to Fort Leonard Wood, it’s fitting that the rock, located in St. Robert, honors the namesake of the military base, General Leonard Wood.

The Pulaski County Freedom Rock is part of the St. Robert Military Tribute, which is made up of rocks painted with emblems representing the various branches of the military. 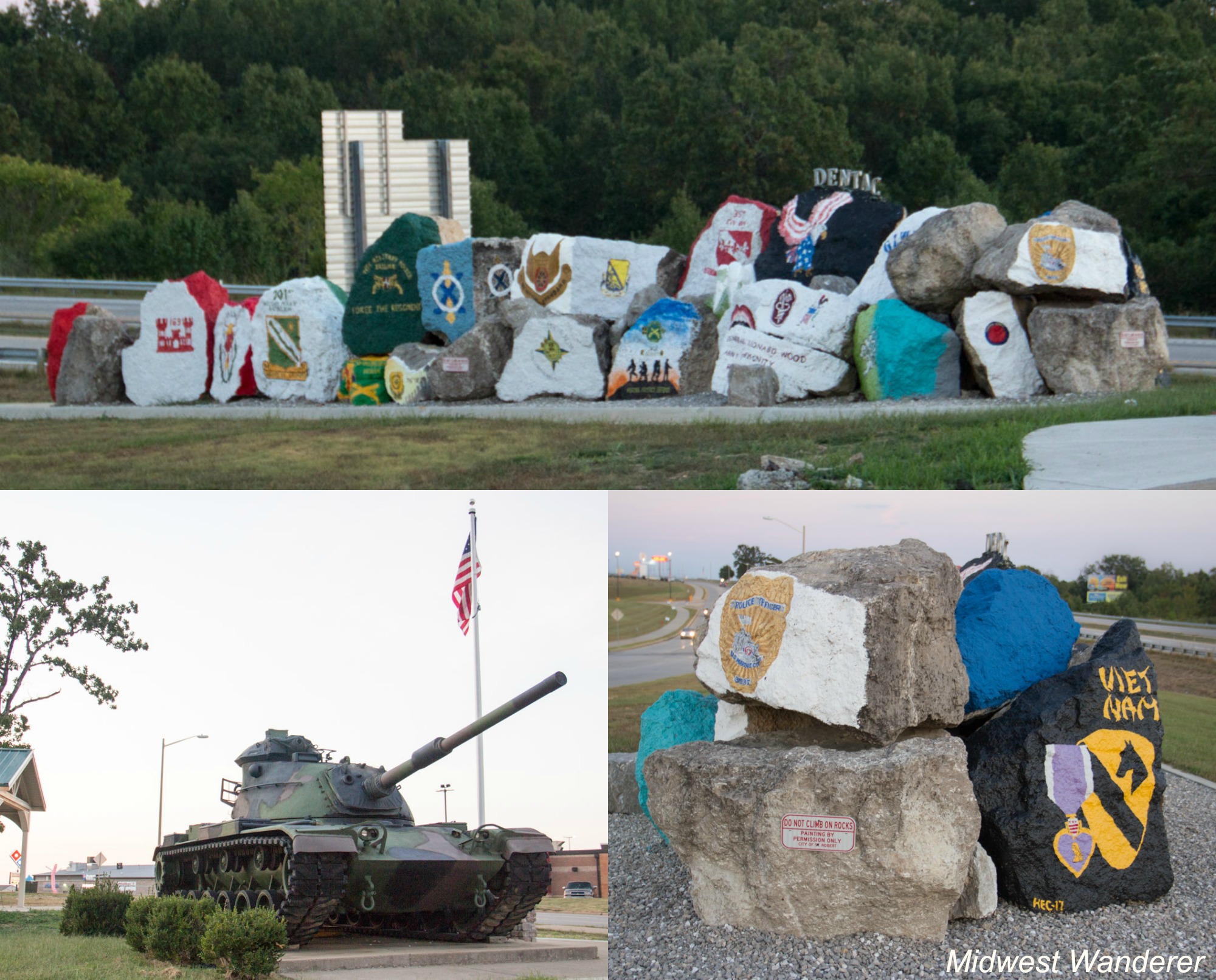 More about the Iowa and 50 State Freedom Rock Tours

Ray anticipates completing the Iowa project on or before 2023. Check The Freedom Rock website for locations of competed rocks. 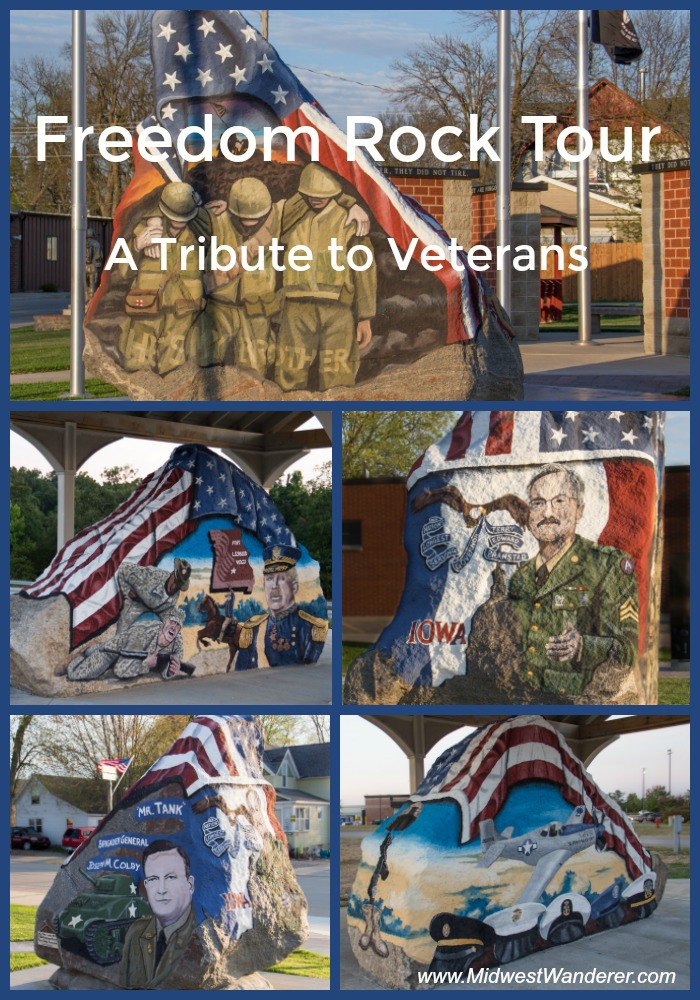 2 thoughts on “Freedom Rock Tour: A Tribute to Veterans”

Before this summer, I knew little about Wild Bill Hickok. Then, within just a few weeks, we visited three places within Kansas and Illinois that all shared Hickok stories—quite a coincidence. I learned several fascinating facts about him. Here are END_OF_DOCUMENT_TOKEN_TO_BE_REPLACED