During the Cathedral of Saint Paul construction, the local Saint Paul newspaper referred to it as the bishop’s folly. It’s too expensive, too grandiose, too big and will never fill to capacity, the newspaper claimed. However, the cathedral opened on Palm Sunday, 1915, to standing room only at all four masses.

This is one just one of the fascinating stories that kept us engaged during our tour of the Cathedral of Saint Paul, in Saint Paul, Minnesota. 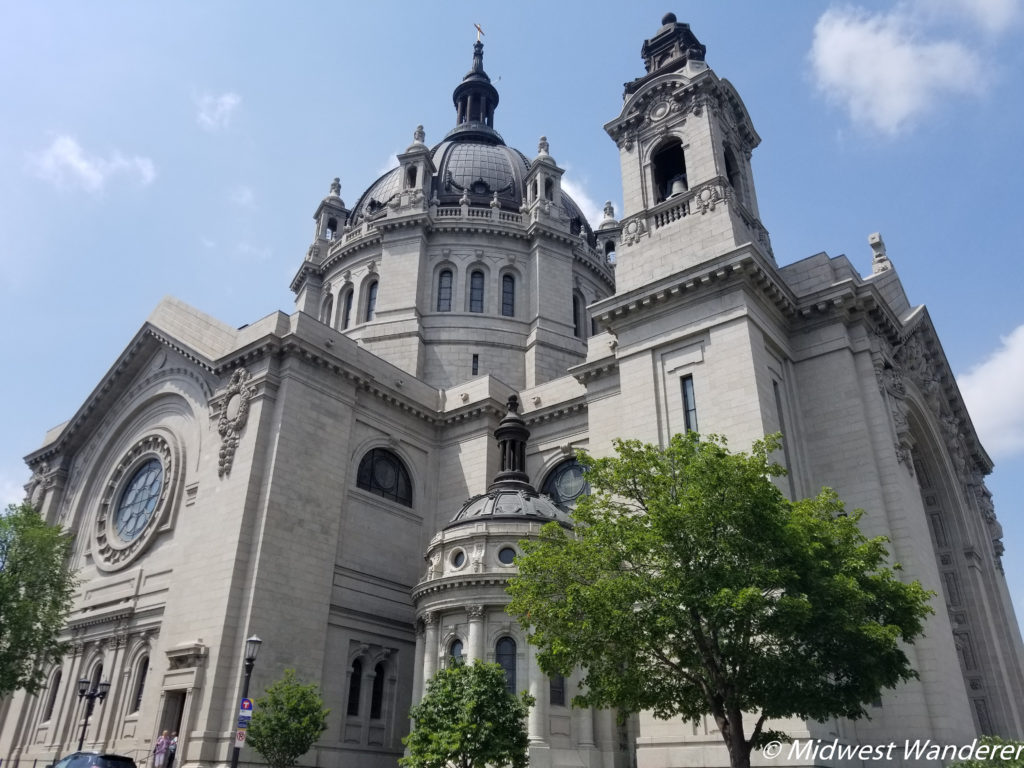 Thank you to Visit Saint Paul for hosting us.
This article may contain affiliate links, through which we may receive a small commission. Read our Privacy Policy for more information on affiliate links.

Our volunteer guide, Carl Simmons, a parishioner of the cathedral, has led tours for over a decade. He also volunteers in the cathedral archives. Carl’s love of the cathedral’s history is apparent in his expert knowledge and captivating storytelling. His tours usually last an hour and ten minutes, but he spent about an hour and a half with our tour group, relating stories of the Cathedral of Saint Paul history, the architecture, and the significance of the religious icons throughout the cathedral.

History of the Cathedral of Saint Paul

The current cathedral is actually the fourth Cathedral of Saint Paul. The first church, a log cabin about 18 x 25 feet, was built in 1840. At the time, a small group of French Canadians lived in the area, a settlement known as Pig’s Eye Landing. Pig’s Eye Landing residents asked Father Galtier, a priest assigned to this Minnesota wilderness area, to build them a church, and he suggested they call the church Saint Paul. In the mid-1840s, the area residents voted to become a community, and they named the community Saint Paul, as well.

Carl continued with stories about the creation of the Diocese of Saint Paul in 1850, the first bishop, and the building of the next three cathedrals, including the current one.

When people packed the third cathedral, which held about 1,000 people, on Easter 1904, then-bishop, Archbishop Joseph Ireland, declared they needed a new, larger, cathedral. He subsequently went to the St. Louis Fair, where he met architect Emmanuel Louis Masqueray and hired him to design the cathedral.

Architecture of Cathedral of Saint Paul

Masqueray estimated the cost for the cathedral at $1.3 million. It ended up costing $1.6 million. Imagine how much that equates to in today’s dollars! The diocese and generous donors paid for everything as they built the cathedral. It took nine years to construct, yet it wasn’t really finished even then. Although the outside was complete, the only things on the inside when it opened in 1915 were the floor and the pews. The rest of the inside was added in subsequent years.

The building of the cathedral interior outlasted the life of Masqueray, who died in 1917, and another architectural firm took over.

They completed the sanctuary in the 1920s. After that, the cathedral sat with no more work done on it due to World War I, the Great Depression, and World War II. They finally completed the dome in the early 1950s.

The dome measures 187 feet tall from the floor on the interior of the chapel, but on the outside, the copper dome is 307 feet from the ground. So it’s a dome within a dome. The interior dome includes 24 stained glass windows, referred to as the Windows of the Angels.

Four mosaics, which represent the four cardinal virtues—temperance, prudence, justice, and fortitude—were created in the Vatican and brought to Saint Paul in 1956. More than 10,000 pieces cut from colored stone make up each mosaic.

Like all Catholic churches, many religious icons fill the cathedral, including in the six chapels behind the sanctuary. Each of the six chapels is dedicated to a patron saint of the Christian ethnic groups that settled the area: St. Anthony of Padua for the Italians; St. John the Baptist for the French Canadians; St. Patrick for the Irish; St. Boniface for the Germans; St. Cyril and St. Methodius for the Slavic people; and St. Therese of Lisieux for France. All of the saints represented, except St. Therese of Lisieux, were missionaries.

More about the Cathedral of Saint Paul

There was so much more to the tour than we can cover in this article, but here are a few more of the facts that I found interesting:

You don’t have to take a tour to wander through the cathedral to see the architectural beauty. However, learning the story behind the construction and the significance of the art pieces is essential to understanding the full story of the Cathedral of Saint Paul.

If you visit the Cathedral of Saint Paul

The Cathedral of Saint Paul, located at 239 Selby Avenue in Saint Paul, Minnesota, offers guided tours at 1 p.m. Tuesday through Friday. Note that tours may be cancelled in deference to special liturgical events.Visit the website for additional details.

During our visit to Saint Paul, we stayed at the Covington Inn, an awesome towboat-turned-B&B docked right on the Mississippi River. Check rates and reviews on TripAdvisor.

Thank you for reading Midwest Wanderer. Don’t miss a post. Enter your e-mail address in the upper right and click Subscribe to be notified whenever I publish another post. Subscription is FREE. After subscribing, be sure to click the link when you get the e-mail asking you to confirm.

Before this summer, I knew little about Wild Bill Hickok. Then, within just a few weeks, we visited three places within Kansas and Illinois that all shared Hickok stories—quite a coincidence. I learned several fascinating facts about him. Here are END_OF_DOCUMENT_TOKEN_TO_BE_REPLACED