Howard Steamboat Museum in Jeffersonville, Indiana, pays tribute to the Howard family and their steamboat building company. The tour combines a history of the ornate Edmonds and Laura Howard mansion and the shipyard located across the street, which the Howard family owned from 1834 until 1941.

Thank you to SoIN for hosting us in the area.
This article may contain affiliate links, through which we may receive a small commission. Read our Privacy Policy for more information on affiliate links.

James, along with his brother, started the ship building company in 1834. They had apprenticed in Cincinnati, Ohio, after coming from England with their parents. The steamboat company was operated until 1941, 107 years after the founding, and sold to the U.S. Government. There, the government built LST ships used during World War II.

Connie: The house, though, wasn’t built until 1890, and it was actually built by James’ son Edmonds and Edmonds’ wife Laura. It took four years to build because they actually used the employees of the steamboat company to build the house.

The family wasn’t allowed to use the entrance that you see here; it was only for company. 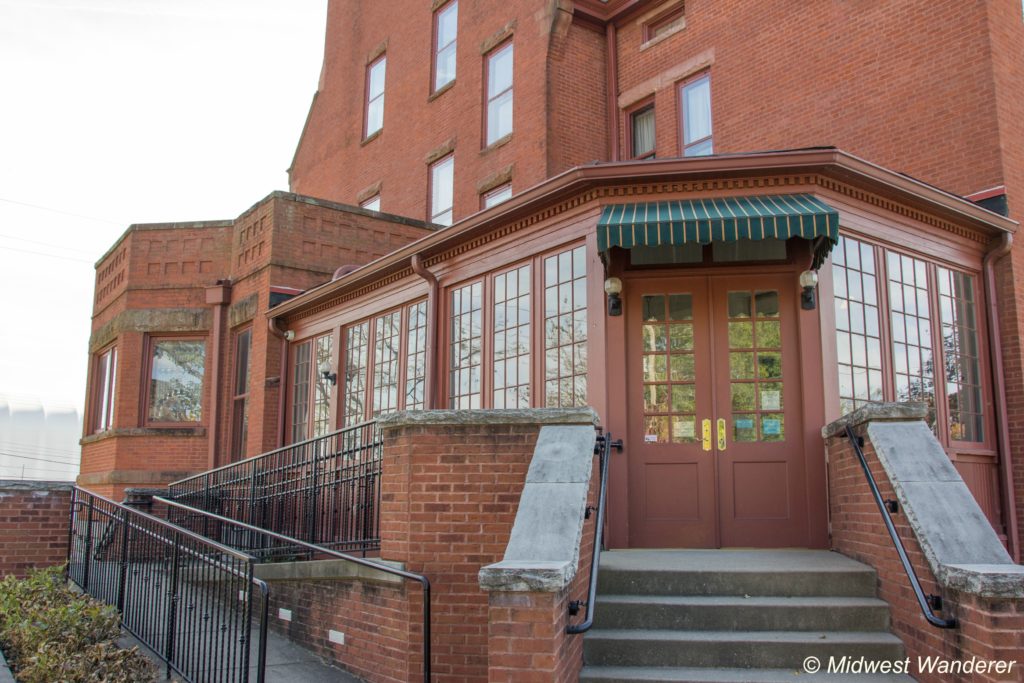 But inside the house, you can see how ornate it is—all kinds of wood carving. They used a master carver from the ship building company to create fireplaces, and woodwork trim, and furniture, all kinds of things. 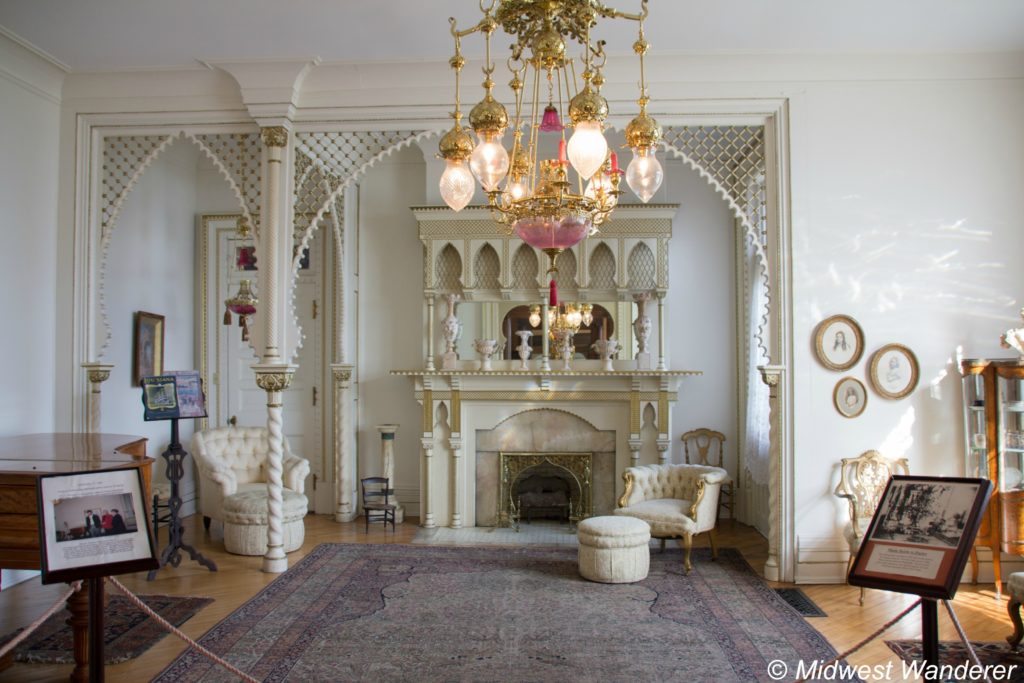 Oh, and the sweeping staircase. It looks like a staircase that would be used on a ship. And that’s another thing the family was not allowed to use. It was only used when company was over. 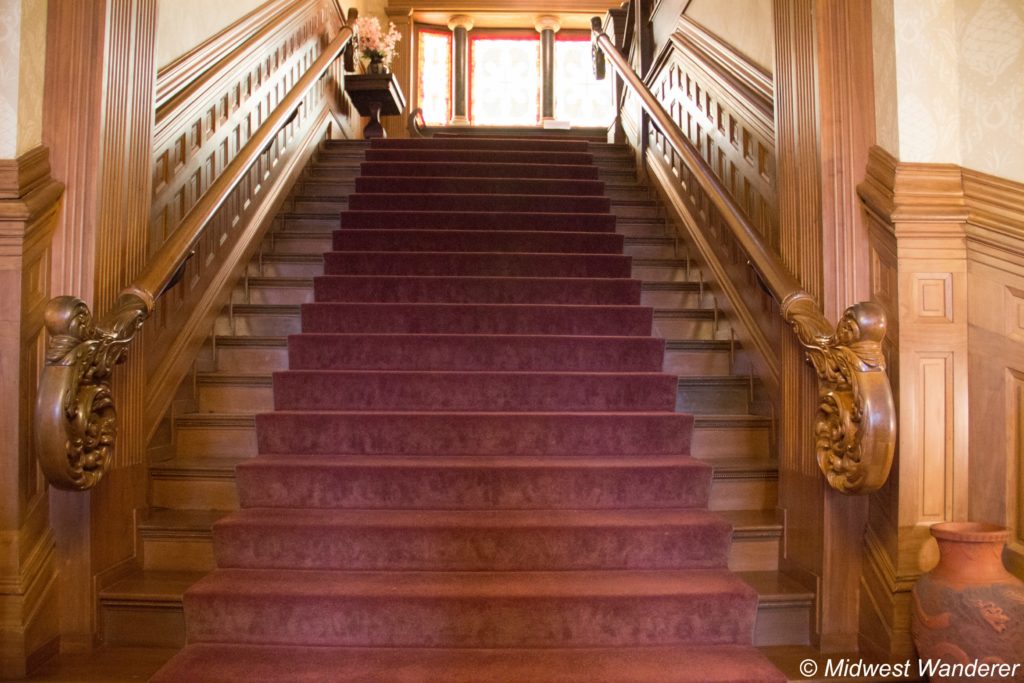 There were a lot of animal antlers and horns in the house, too. I thought this chair was really interesting. It was from some friends in Chicago who ran a meat packing company, and they made these chairs that had 24 Texas steer horns in them. 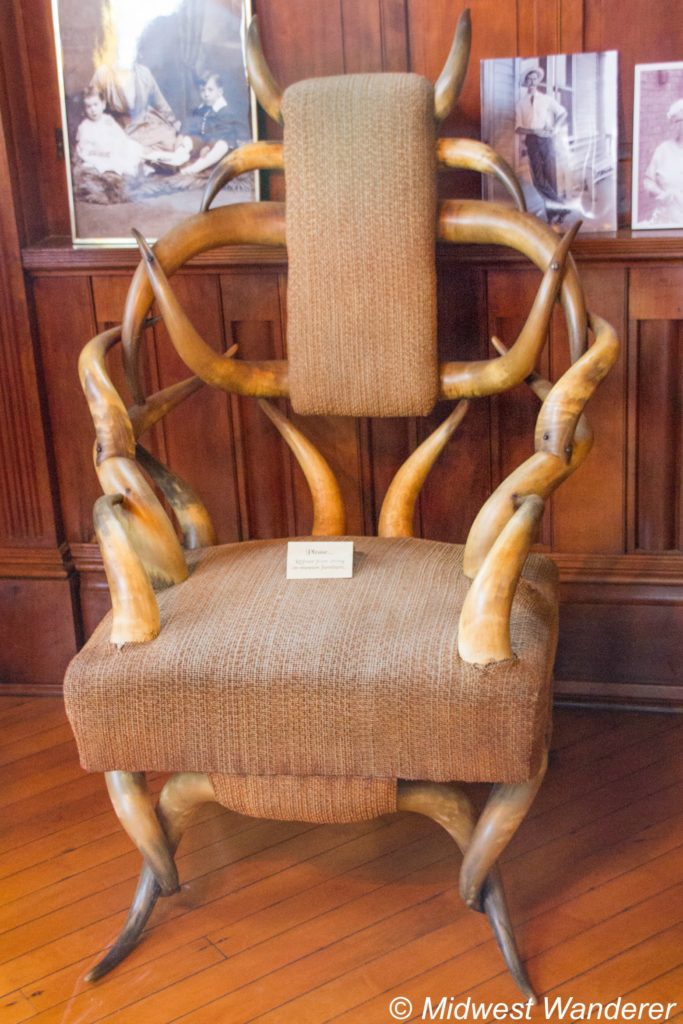 Skip: Well, on the topic of antlers and horns, when a steamboat won a race with another boat or set a speed record, they were awarded a set of golden antlers, which symbolized the riverboat supremacy, or fastest on the river.

Connie: And didn’t those golden antlers end up as a coat-and-hat rack in the steamboat office?

Skip: I believe it did.

Skip: Well, he went back as far as he could for recorded history and placed the house where he believed the water would never rise to.

Skip: And Edmonds had since passed by that time.

Connie: And the water went up the staircase. Well, this piano was on the first floor, and what they did— They took as many things as they could upstairs to where the floodwaters wouldn’t get to it. But they couldn’t take the piano upstairs, so they set it up on some rocks, some stones.

Skip: Some stones or blocks.

Connie: And the floodwaters just pushed it right off, and it was submerged. Well, they did have the piano restored, and it’s beautiful. They had a Steinway person come out. They restored the piano beautifully on the outside; but the inside, well, there’s nothing they could do with the keys, unfortunately. It would cost them a whole lot more than they could ever want to spend. 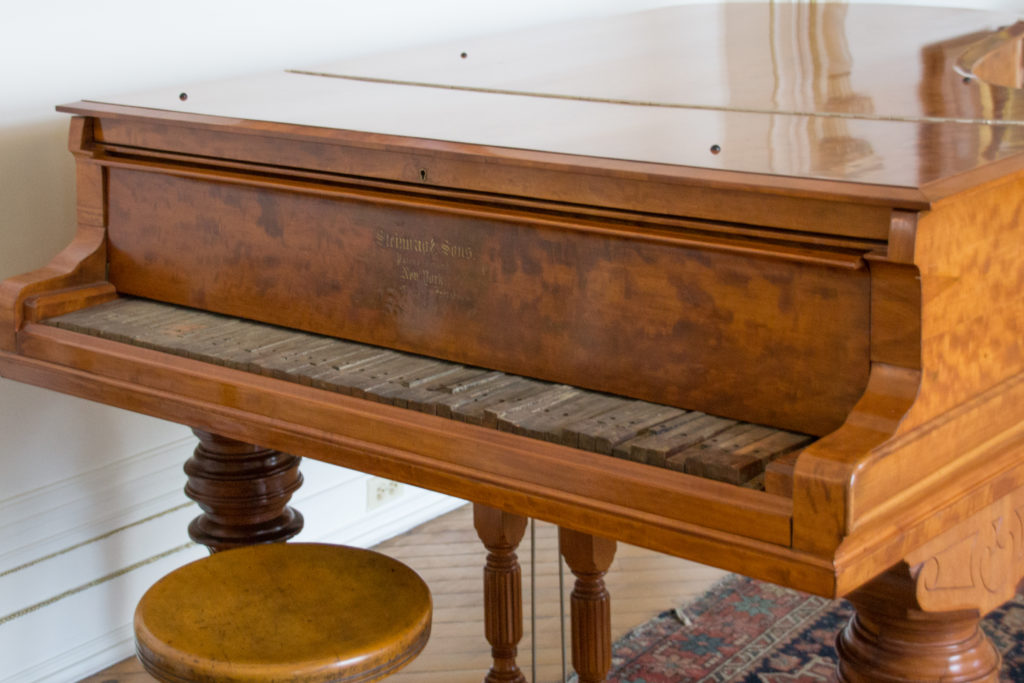 Connie: Edmonds’ son recalls during the flood, he rowed a boat into the house and to the staircase, and then went up the stairs and went to bed. He said the noises and the smell were something awful. He just wanted to get out of there.

And speaking of the upstairs, the upstairs was just as ornate as the downstairs was, all kinds of wood spindles and carvings. And what we didn’t mention was that Laura, Edmonds’ wife, had gone to the Chicago World’s Fair while the house was being built and brought back all kinds of things. One of the things she brought home was brass bed, and she actually brought home three of those. 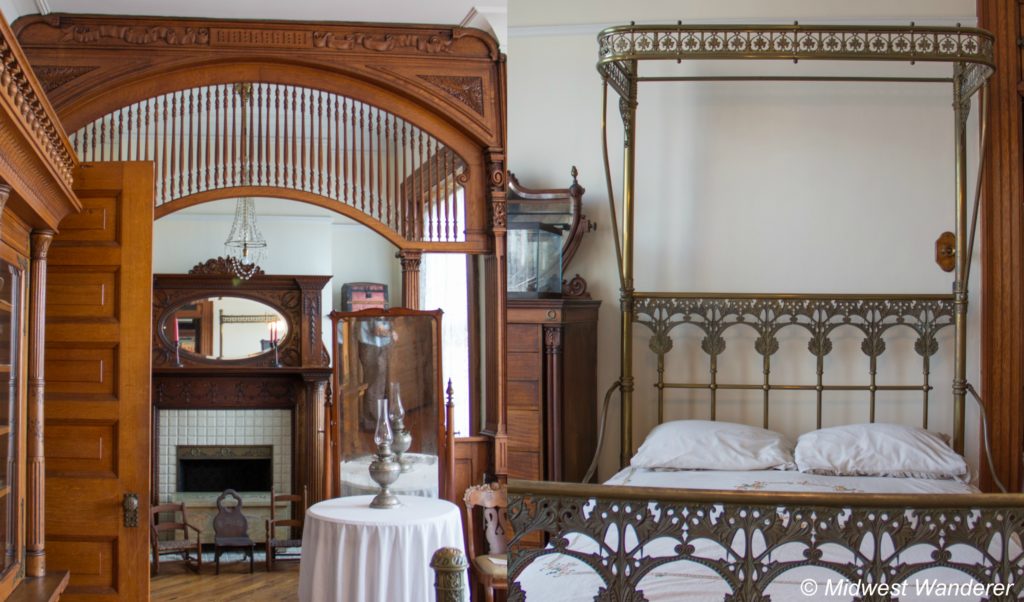 And the bathroom fixtures were gorgeous. Look at this sink. It’s made of Tennessee marble, and Laura actually designed the sink herself. In fact, there are two sinks, his and hers. Speaking of plumbing, theirs was one of the first houses that had indoor plumbing. The toilet was one of those early toilets with the tank on top. What’s really impressive about this one, though, is the bowl of the toilet.

Skip: It has a design in the bottom that’s actually formed when it’s cast.

Connie: And the bathtub, besides just the regular bathtub, had this shower. I think they called it a pin bath. It was something that Laura had seen at the Chicago World’s Fair when she went there and had to have it. I’m not sure exactly how it worked, but it included a thermometer for the hot water.

Skip: To regulate the temperature of the water. And then the footbath next to the tub.

Connie: Yeah, have you ever seen such a thing? 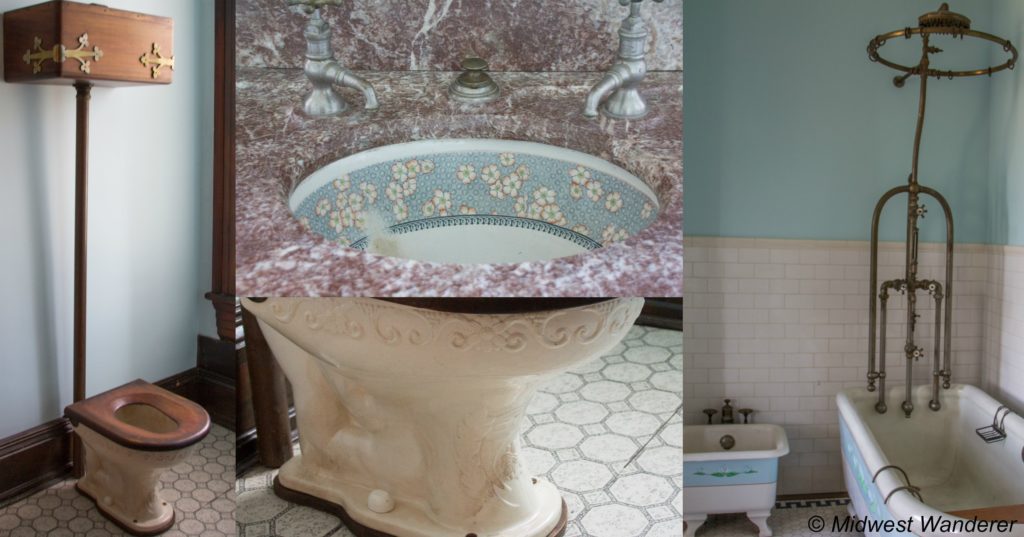 Oh, and the stained glass, beautiful stained glass in the house, too. It was designed by Blum Ornamental Glass out of Louisville, which is still in business. 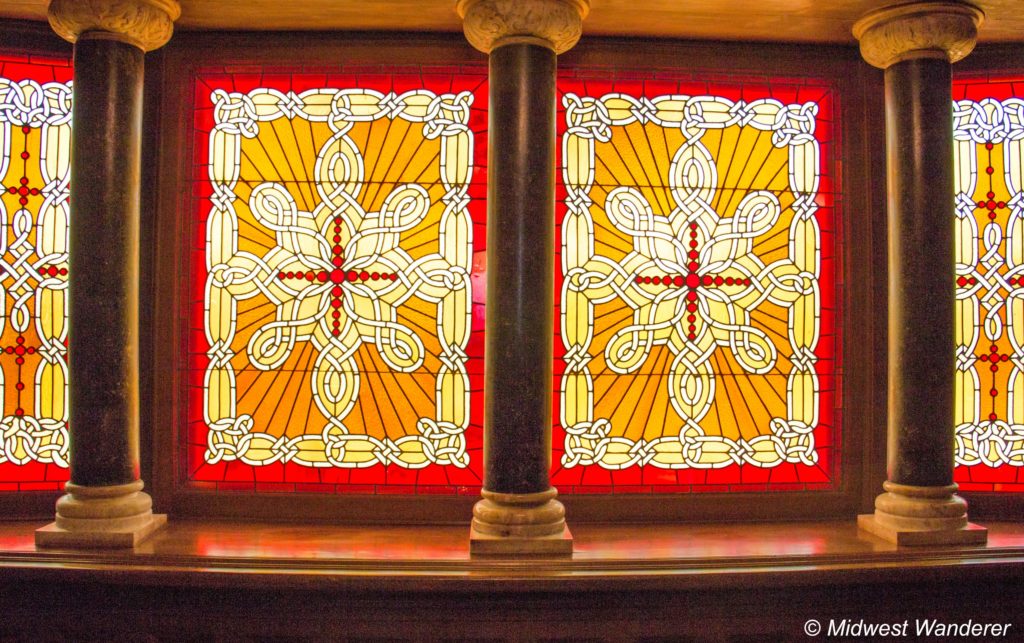 There’s a story about one of the stained glass windows. In 1971…

Skip: …when there was a fire in the house, which was caused by an explosion in the boiler in the basement, and it actually rose up through the center of the house.

Connie: And the firemen were there trying to put out the fire. The fire chief gave an axe to one of the firemen and said, “Break this window. We have to get in there.” The fireman said, “Uh-uh, I’m not going to do it.” Well, the fire chief it to do it. It had to be done. So the fire chief actually broke the window out. But, it was able to be redesigned because the Blum Ornamental Glass Company still had the pattern from all those years ago.

Skip: In the upstairs of the home is the museum, with display cases of many of the boats that the Howard shipbuilding company built over the years, going from the Natchez to tugboats to various either side-paddled boats or the rear paddle steamboats.

Connie: There was one that had oars on the side, and the steamboat actually made the oars go around. 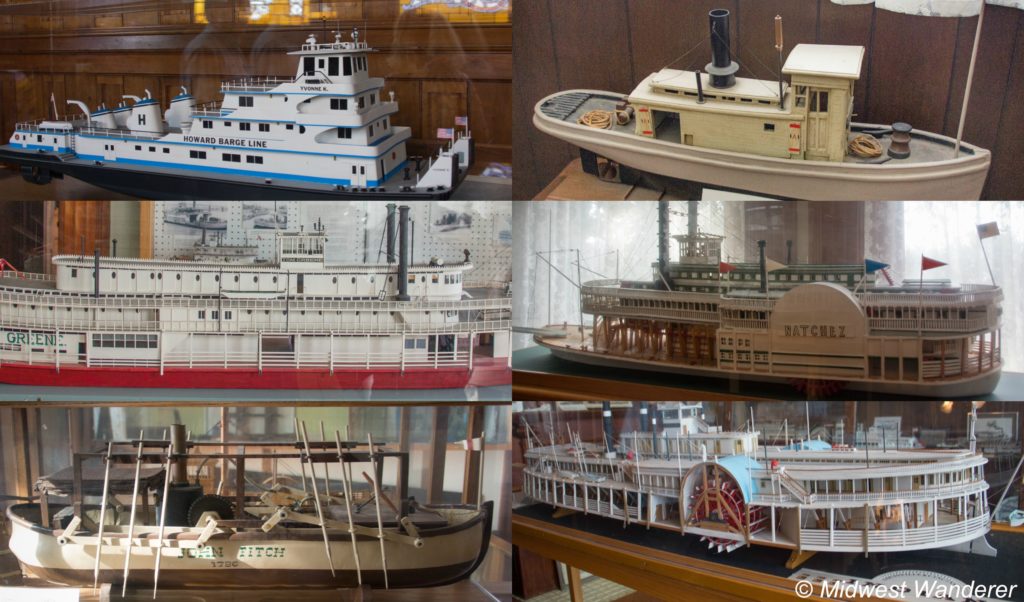 Skip: One of the interesting things we came across was a steam whistle from one of the steamboats. The Howard granddaughters recalled lying in bed and could hear the various steam whistles out there and could tell which boat it belonged to.

There’s even a model steam engine for you to see.

Connie: And then there are these fire buckets. These buckets were required by law to be on the boat. The unusual thing about these buckets is that the bottom was rounded. That was so that you couldn’t use them as a mop bucket. They were required to be filled with water at all times in case there was a fire on the boat—which was real often that fires broke out on the steamboats. Steamboats actually didn’t last long. Their longevity was somewhere between three and five years. The Howard boats were known to last longer than the average.

And then there was some cool stuff that they used in the boatyard office, like this Ediphone, which was an early version of the Dictaphone.

Skip: Which nobody knows about today.

Connie: That’s true. A Dictaphone was a machine that, for those of you who are not quite as old as us, a Dictaphone was used to dictate into and then a secretary transcribed it.

And I thought this typewriter was cool. I have never seen one like this before. The patent date was 1881, and I think it looks like maybe today’s ergonomic keyboard. I don’t know, but it looks very awkward to use.

There were other things on the boat, things that were used on the boat, like china and silverware, tea sets, things like that.

Skip: and as you exit the museum, there’s the wheel from one of the boats that the Howard Boats built.

If you visit the Howard Steamboat Museum

We stayed at the Market Street Inn Bed & Breakfast during our visit to Jeffersonville. Check rates and reviews on TripAdvisor

Before this summer, I knew little about Wild Bill Hickok. Then, within just a few weeks, we visited three places within Kansas and Illinois that all shared Hickok stories—quite a coincidence. I learned several fascinating facts about him. Here are END_OF_DOCUMENT_TOKEN_TO_BE_REPLACED