Touring the Community Veterans Memorial in Munster, Indiana, is like winding your way through U.S. Military history. From sculptures to landscaping, the memorial takes you through 20th century wars.

Editor’s note: This article was originally published in November 2015. We visited the memorial again on Memorial Day 2020. Although the trail through the memorial is open 24 x 7, the restrooms remain closed.

Driving by on the street, you’d think you were passing an ordinary park. However, once you begin the memorial trail, you’ll find it more closely resembles an outdoor museum.

The memorial is set up to be self-guided, although veterans volunteer their time to escort larger groups. On the day we visited, we were honored that five veterans greeted us and walked us through the memorial. They shared  the memorial’s history and the symbolism of the sculptures. They added entertaining quips from their own military backgrounds.

The late Don Powers, a successful Munster real estate developer and World War II veteran, dreamed of building the memorial. He donated the 6.3 acres for the project and worked with the late Ed Robinson to bring the memorial to fruition. Robinson was another prominent local businessman and a Korean War veteran. The memorial, owned by the Community Foundation of Northwest Indiana, was financed through private funding.

Brick pavers, etched with significant historic events, edge the memorial’s path. Sculptures represent each of the wars. Artist Omri Amrany created most of the sculptures.

Local aspects add a more personal tone. For instance, the tail numbers on the helicopter in the World War II display are the numbers of the helicopter that memorial co-founder Don Powers flew.

Landscaping through the memorial represents the various war locations. For instance, the grasses planted near the Vietnam section represent bamboo.

Press the audio buttons located at each of the exhibits to hear an explanation of the sculptures. 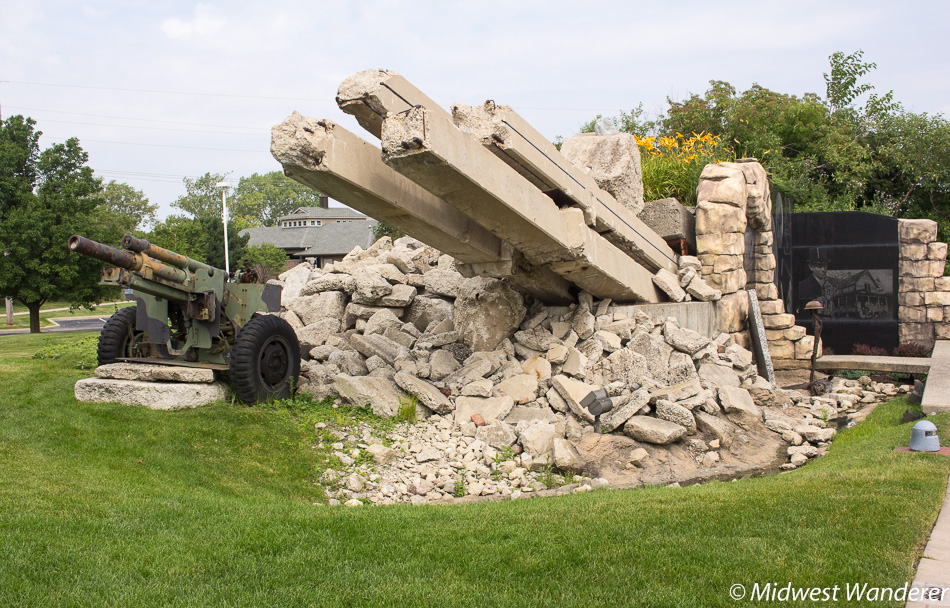 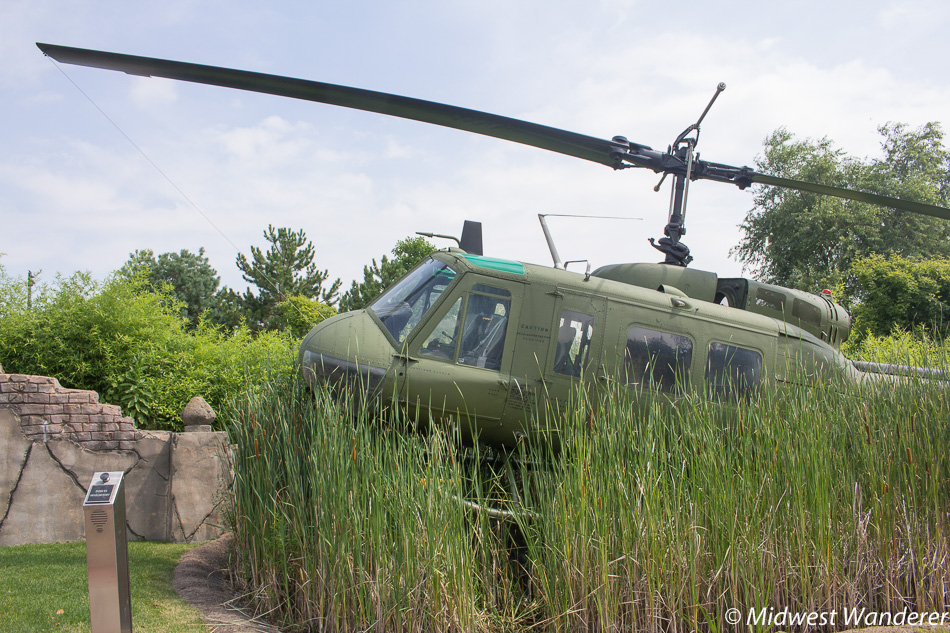 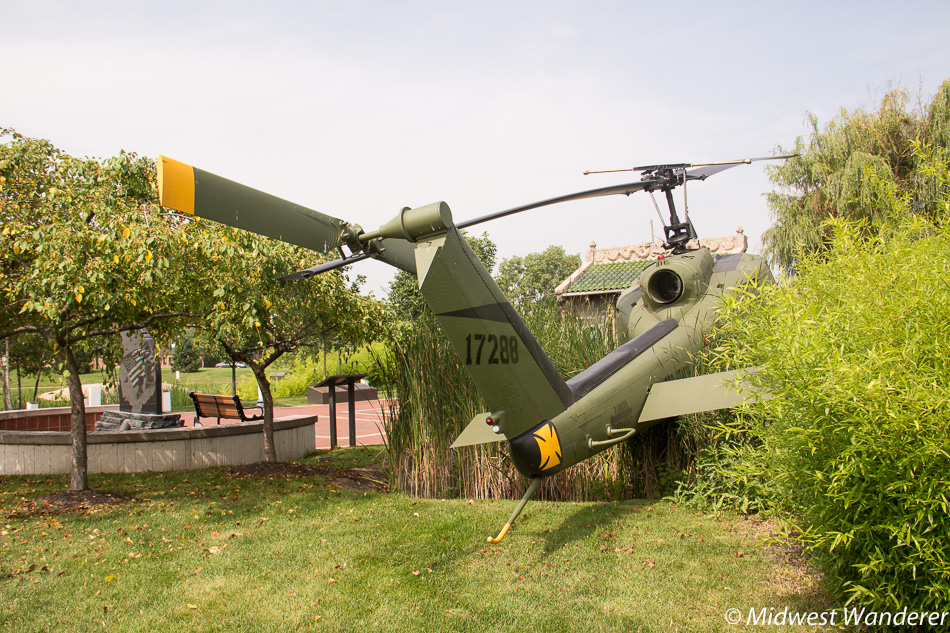 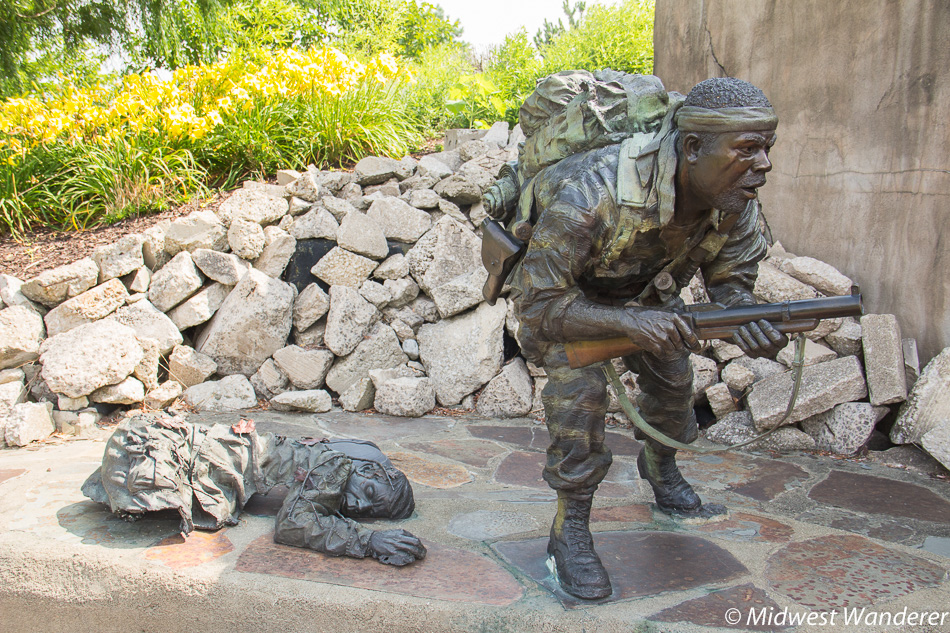 Bricks etched with veterans’ names make up path through the memorial. Anyone can honor a veteran with a brick, whether they’re from Northwest Indiana or elsewhere, for a  donation of $75 or $150, depending on the brick size. Bricks can be ordered on the Community Veterans Memorial web site. Funds from the brick donations are used for memorial maintenance and beautification. 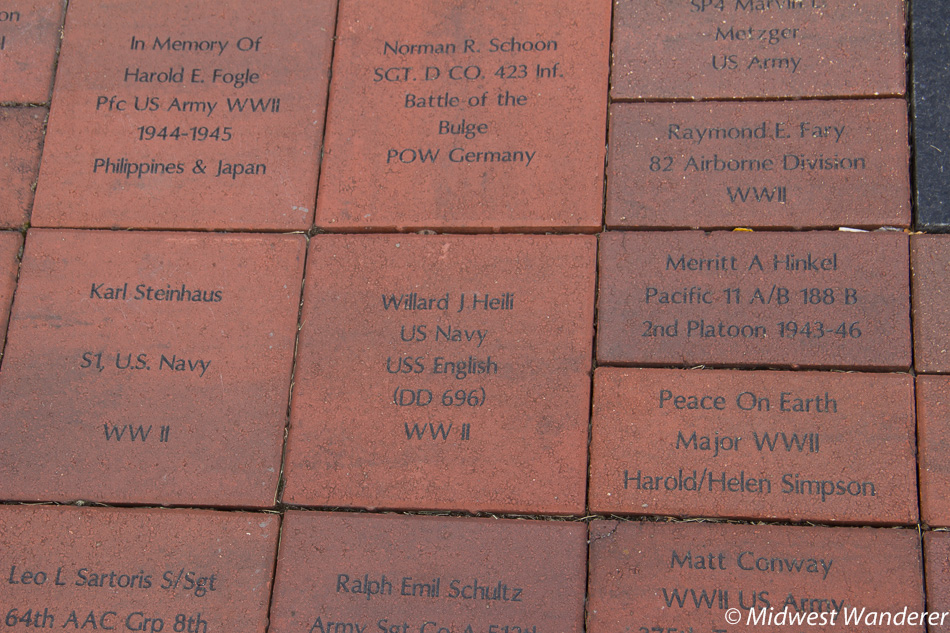 Twice a year members of the local VFW, Munster Post 2697, place the newly etched bricks in the path. Family members of those honored often come out on that day to take photos of the bricks being put in place. Bricks can be placed in whichever area of the memorial the donor chooses.

Ceremonies are conducted at the memorial on Memorial Day, Independence Day, and Veterans Day. Memorial Day. Independence Day includes presentations and a 21-gun salute. On Veterans Day, “Taps” follows a three-volley salute. Community support is especially strong on these holidays. “We get a lot of notes here by families that write messages,” one of our veteran escorts told us. “Memorial Day, you’ll walk through here, and there will be American flags all over. And Veterans Day we have a really big outpouring of this community.”

The Community Veterans Memorial, located at 9710 Calumet Avenue in Munster, Indiana, is open every day dawn to dusk, weather permitting. Admission is free. Visit the web site for further information. 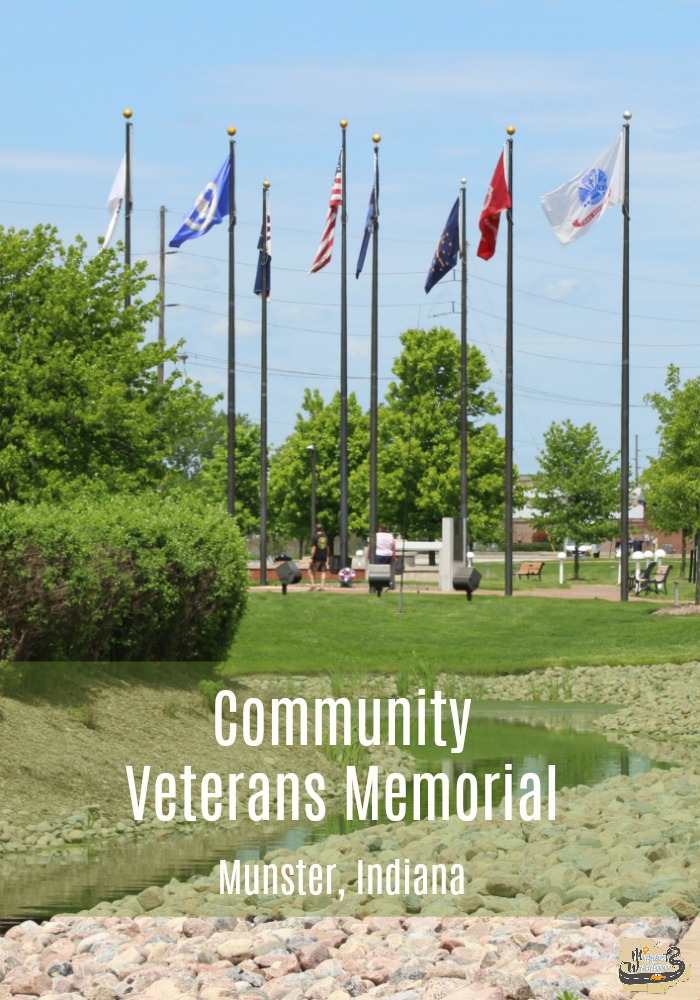 Thank you for reading Midwest Wanderer. Don’t miss a post. Enter your e-mail address below and click Subscribe. We will then notify you whenever we publish another post. Subscription is FREE. After subscribing, be sure to click the link when you get the e-mail asking you to confirm.   – Connie

Before this summer, I knew little about Wild Bill Hickok. Then, within just a few weeks, we visited three places within Kansas and Illinois that all shared Hickok stories—quite a coincidence. I learned several fascinating facts about him. Here are END_OF_DOCUMENT_TOKEN_TO_BE_REPLACED