The little house on a corner in Meade, Kansas, looked like any family home in the late 1800s. The family who lived there appeared to be the average family. John Whipple owned a local mercantile. His wife, Eva, partnered in a millinery shop before the two married and Eva gave birth to a little girl. But the wife and mother didn’t come from your average family. She was a Dalton, and three of her ten brothers belonged to the Dalton Gang. After Eva and John moved out of the little house on the corner, a 95-foot tunnel connecting the house with the barn was discovered. Historians believe Eva occasionally harbored the Dalton Gang in the house, and the Wild West outlaws used the tunnel to avoid being noticed. Today you can tour the Dalton Gang Hideout, walking from the barn, though the tunnel, and into the house.

Thank you to the Visit Liberal, Kansas, for hosting our stay in the area. 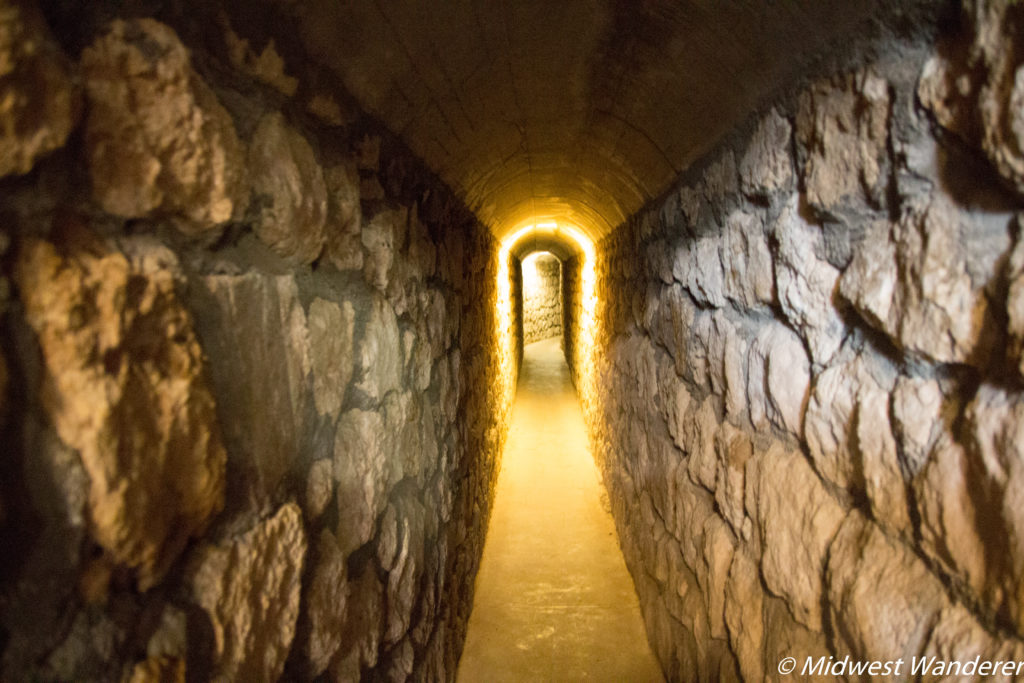 Eva and John and the Deed to the House

John Whipple bought the property a month before the couple married in 1887. However, he deeded it to another man just weeks after the wedding. The mercantile must have closed at that time, as well, since researchers found no more ads for the store after that. Two months later, the property was deeded to Eva Dalton Whipple. The deed stayed in her name, and her name was first on the tax rolls, which was quite unusual at that time. With no more income from the store, how did the Whipples make their income? There are no records, so one might question whether the Dalton brothers were paying them to provide the hideout. 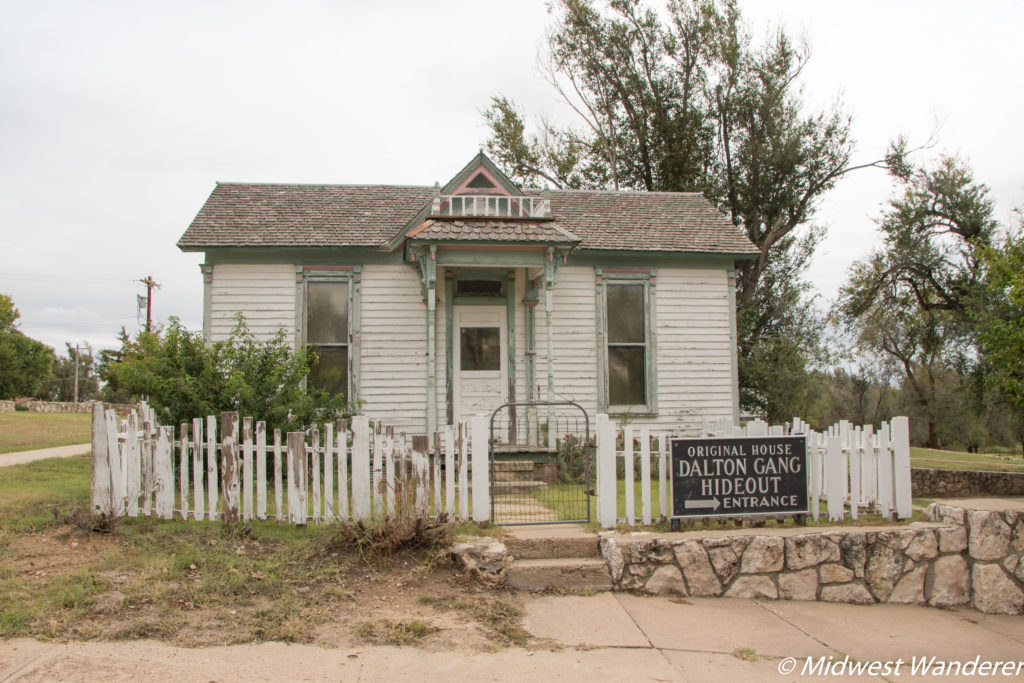 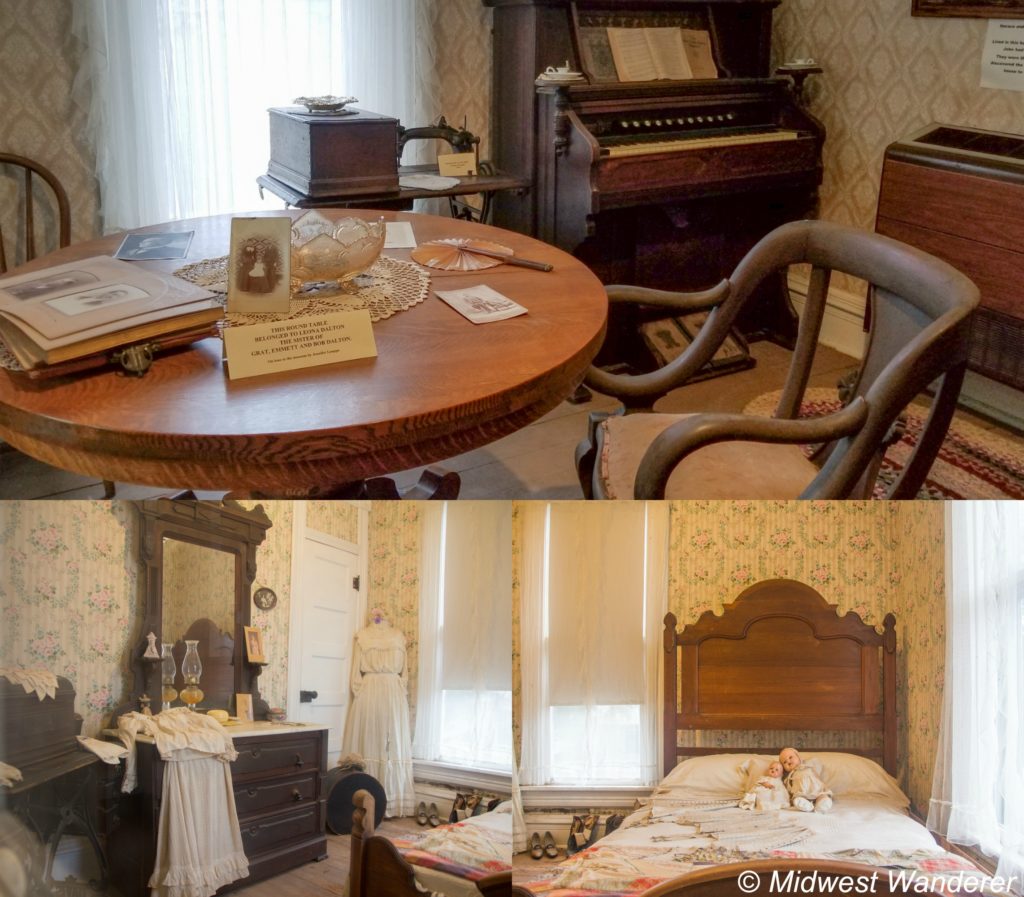 In October 1892, the Dalton Gang attempted to rob two banks at one time in Coffeyville, Kansas. They were trying to outdo the James-Younger Gang. Despite donning fake beards and wigs, the townspeople recognized them as they walked through the streets. Townspeople gathered outside the bank doors after the Dalton Gang entered. Gunfights ensued, and two of the Dalton brothers, two other gang members, and four townspeople were killed. The third Dalton brother, Emmett, survived 23 gunshot wounds. He was captured and sent to prison.

Eva and John Desert the House

A month later, in November 1892, the sheriff tried to deliver a summons for foreclosure to Eva and John Whipple, as they hadn’t paid their taxes in a few years. However, the house was empty. They had moved out of the area. Records indicate that in later years they lived in Arkansas, Oklahoma, and perhaps Colorado.

The house was sold during a sheriff’s sale. The new owners discovered the tunnel when strangers started showing up in the house after leaving their horses in the barn. They subsequently sealed off the tunnel entrance.

If You Visit the Dalton Gang Hideout

The Dalton Gang Hideout, located at 502 S Pearlette Street (four blocks south of Highway 54) in Meade, Kansas, is open year round, seven days a week. Check the website for hours and admission rates.

We stayed at the Hampton Inn in Liberal, Kansas. Check rates and reviews on  TripAdvisor

Other Things to Do in the Area:

Dorothy’s House and the Land of Oz & Coronado Museum

Before this summer, I knew little about Wild Bill Hickok. Then, within just a few weeks, we visited three places within Kansas and Illinois that all shared Hickok stories—quite a coincidence. I learned several fascinating facts about him. Here are END_OF_DOCUMENT_TOKEN_TO_BE_REPLACED