When insurance salesman Max Zimmerman attended a convention in California in 1978, he went to dinner with his name tag still on. His waitress told him she had never been to Kansas. Max asked what she might expect to see in the state. She replied, “Dorothy’s house,” referring to the classic movie The Wizard of Oz. So upon his return home to Liberal, Kansas, Max and the community worked to bring Dorothy’s house to Liberal. Today, the attraction includes both Dorothy’s House and The Land of Oz.

Thank you to Visit Liberal for hosting us during our stay in Liberal.
This article may contain affiliate links, through which we may receive a small commission. Read our Privacy Policy for more information on affiliate links. 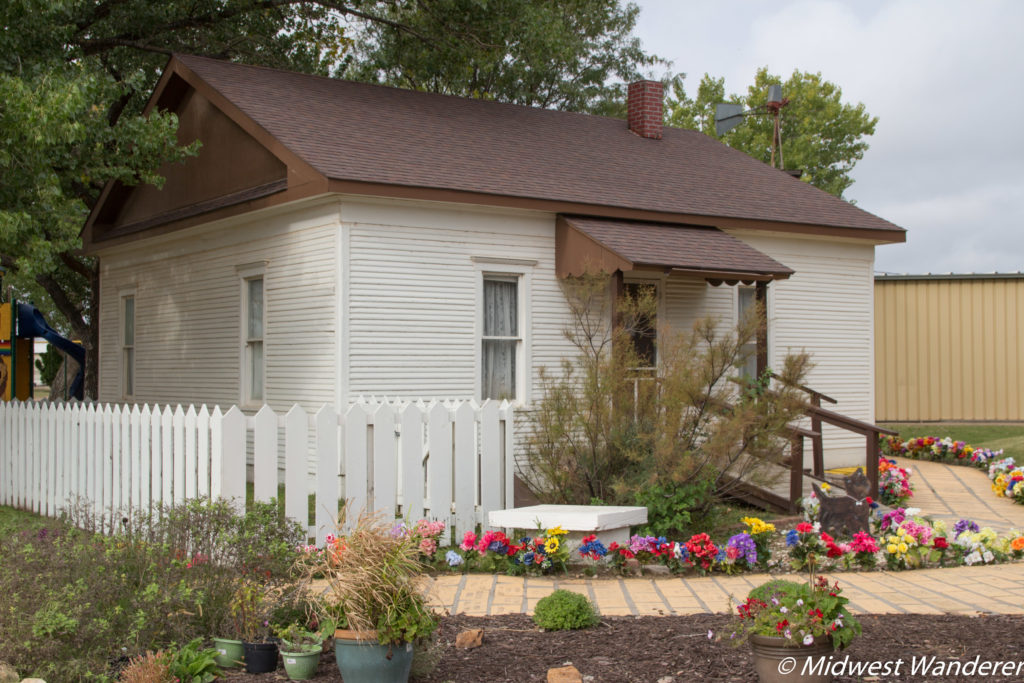 There are actually two yellow brick roads in The Land of Oz, one outdoors and one indoors. The outdoor path is paved with bricks engraved with the names of donors to the project. The most prized brick is the one engraved with Liza Minnelli’s name. Liza Minnelli is the daughter of Judy Garland, who played Dorothy Gale in the movie. Other notable names along the Yellow Brick Road are President and First Lady Ronald and Nancy Reagan, Bob Dole, and John Carlin. John Carlin, a former governor of Kansas, proclaimed Liberal to be the official home of Dorothy Gale’s house. 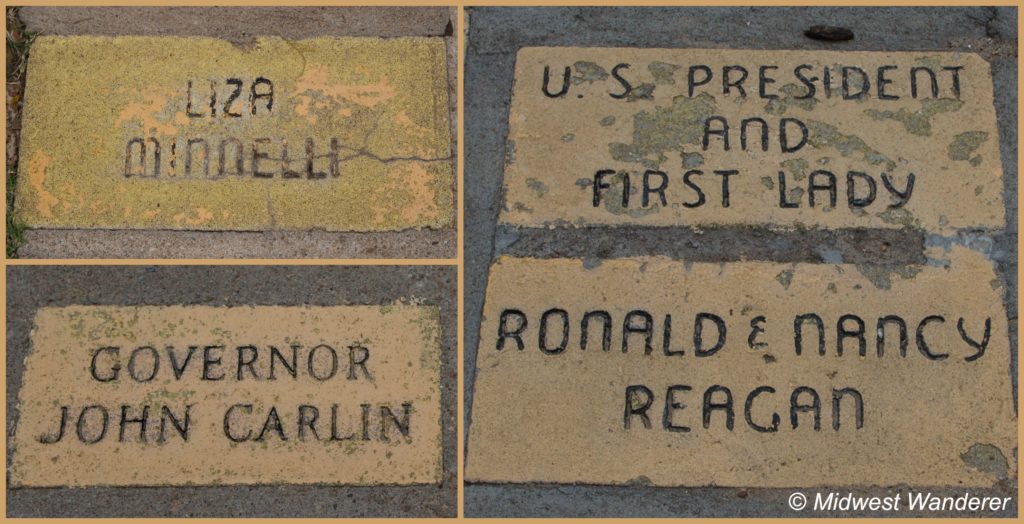 The small farmhouse was moved from its original location about seven miles northeast of Liberal to its present location in town. Decorated in period furnishings, some items mimic the movie, while others are general historical artifacts. Dorothy’s room is replicated from a photograph that MGM Studios sent when they heard about the project. 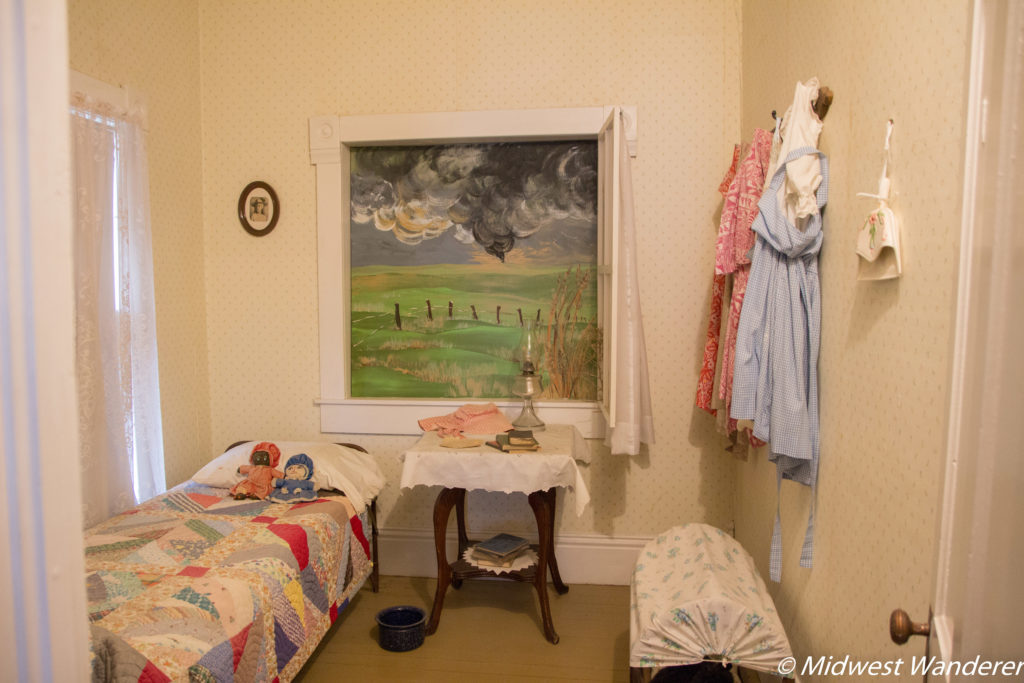 In the house, Dorothy explains items like a hair receiver, stereoscope, and Victrola, and she shares some interesting facts.

Fun fact: Women wore bonnets to keep their hair clean. Since the lye soap they used to wash their hair was harsh, they wanted to wash it as seldom as possible.

After touring the house, Dorothy leads you back outdoors to continue along the Yellow Brick Road to The Land of Oz.

Experiencing The Land of Oz

In The Land of Oz building, you first enter the Gale living room. Dorothy begins her story, following the tale of The Wizard of Oz. You experience the tornado, as the lights dim and the wind howls. Afterwards, you walk through a door into the magical Land of Oz.

Dorothy continues with the story, meeting Glinda and the Munchkins, and leads you down the Yellow Brick Road to the Emerald City. Of course, along the way you meet the Scarecrow, Tin Man, and Cowardly lion, as well as the Wicked Witch of the West.

You make it all the way to the Emerald City, where you discover that the Wizard of Oz is just an ordinary man who controls machinery from behind a curtain.

The young lady who portrayed Dorothy during our visit (there are several teenage girls who play the part of Dorothy) did a fabulous job of relating the story.

The tour ends in a memorabilia room filled with artifacts from the movie. Some of the items were donated by collectors. Others were donated by Munchkins. In fact, the Munchkins used to hold a reunion in Liberal every other year. Unfortunately the last living Munchkin passed away in 2018, at the age of 98.

Artifacts include a poster from the 1902 Wizard of Oz musical and the small model of the house that was used in the movie when the house spins in the tornado.

There is also a replica of Frank L. Baum’s office. Baum is the author of the Wizard of Oz books.

Fun fact: Baum had the title “The Wizard of…” but couldn’t think of good name to complete it. One day he was filing something and saw that the last drawer of his file cabinet was titled “O – Z.” And “Oz” became the magical land.

If you visit Dorothy’s House and The Land of Oz

Dorothy’s House and The Land of Oz are located at 567 Yellow Brick Road, in Liberal, Kansas. Liberal is located in southwest Kansas, about 84 miles southwest of Dodge City. The attraction is open year-round (closed on Mondays from Labor Day to Memorial Day). However, Dorothy leads the tours only when school is not in session. Visit the website for exact hours and admission rates.

During our visit to Liberal, we stayed at the Hampton Inn & Suites Liberal. Check rates and reviews on TripAdvisor

Before this summer, I knew little about Wild Bill Hickok. Then, within just a few weeks, we visited three places within Kansas and Illinois that all shared Hickok stories—quite a coincidence. I learned several fascinating facts about him. Here are END_OF_DOCUMENT_TOKEN_TO_BE_REPLACED