Most Americans know that Abraham Lincoln, the nation’s sixteenth president, lived a modest childhood. He was born in a log cabin in Kentucky and moved with his family to other cabins in Kentucky, Indiana, and Illinois until striking out on his own when he was 22 years old. Over the past few years, we’ve visited five Lincoln home sites, all of which are designated state or national historic sites. 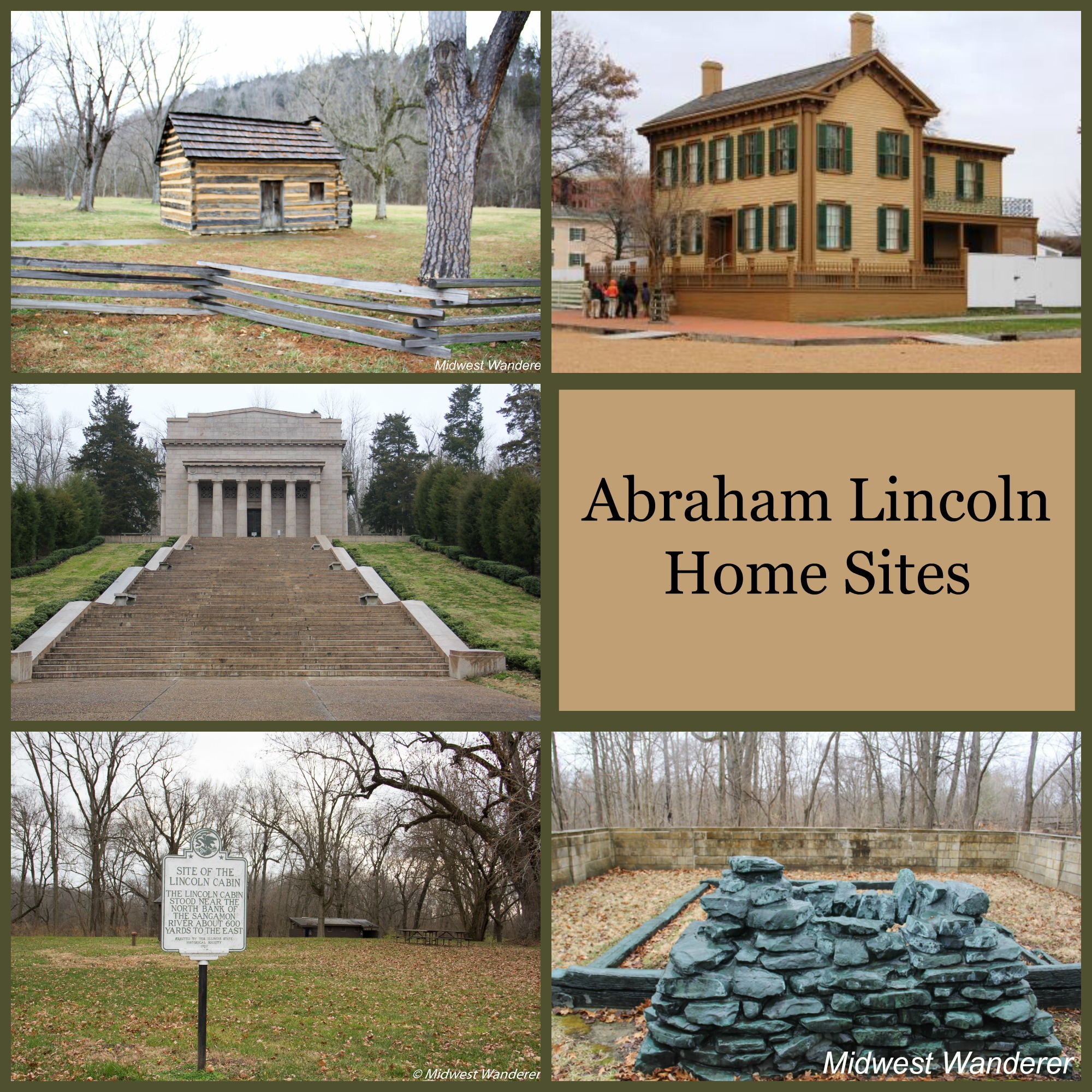 Lincoln was born in what is now Hodgenville, Kentucky. His birthplace, Sinking Spring Farm, is now the Abraham Lincoln Birthplace National Historic Park. A small museum in the park includes a diorama of what the inside of the cabin where Lincoln was born may have looked like. Several artifacts are also on display, including the Lincoln family Bible.

Also on the property is the First Lincoln Memorial. President Theodore Roosevelt laid the cornerstone for the memorial on February 12, 1909, Lincoln’s 100th birthday. Fifty-six stairs lead to the memorial building, one stair every year of Lincoln’s life. Inside the building, sixteen windows and sixteen rosettes in the ceiling symbolize Lincoln as the sixteenth president. An old cabin from the area inside the memorial building symbolizes the one in which Lincoln would have lived. The fencing that surrounds the cabin has sixteen posts.

Following a land dispute, the Lincoln family moved down the road to Knob Creek. Abraham was two year old at the time. It was at Knob Creek that Abraham had his first recollections of childhood. One incident he didn’t forget was the time he almost drowned. He fell into the creek while playing and probably would have drowned had it not been for his childhood friend, Austin Gollaher. Austin held a long tree branch out to Abraham to grab onto and pulled him in.

An old cabin on the Lincoln property is not the one the family lived in, but is representative of it. 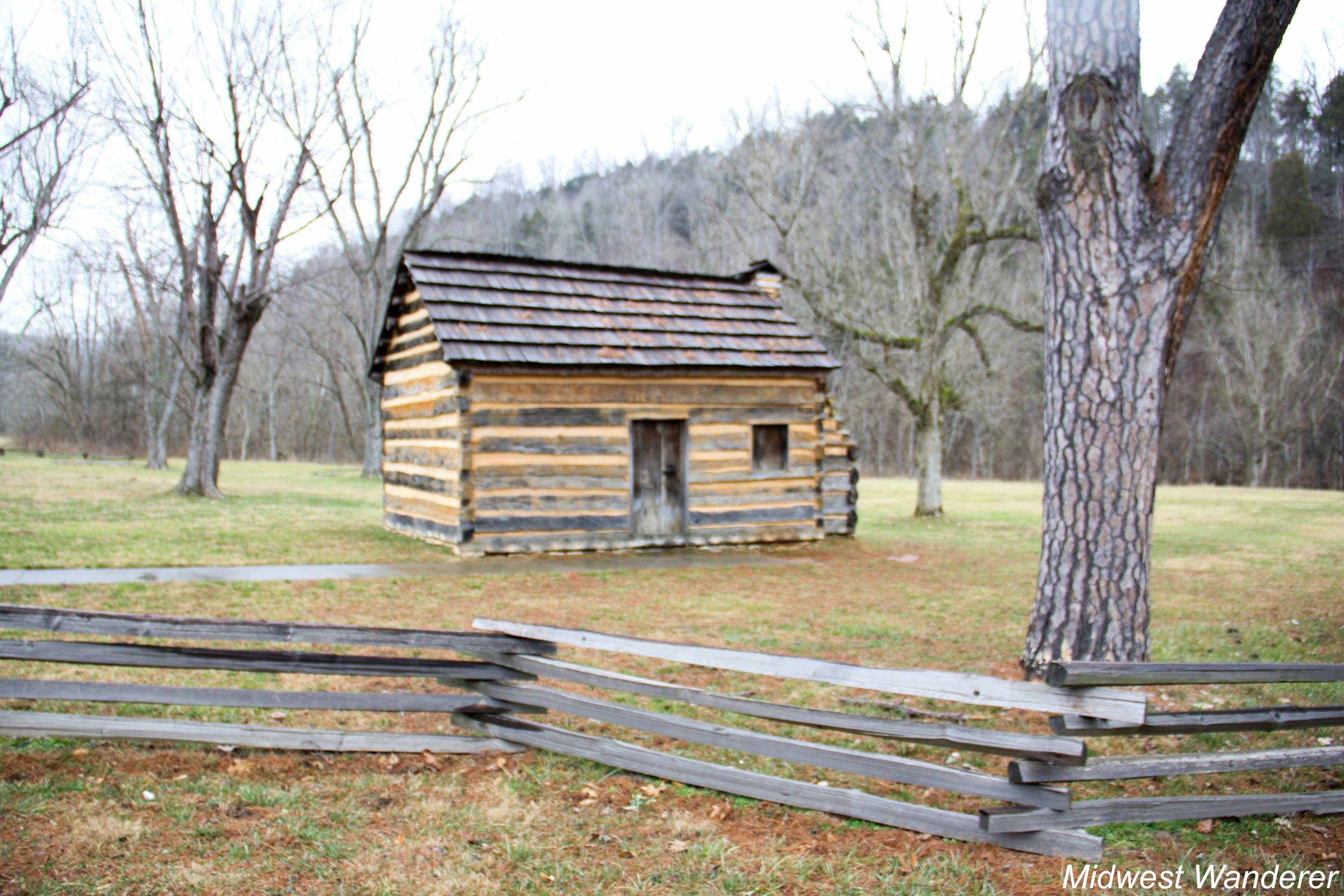 When Abraham was seven years old, the family moved to Indiana following another land dispute. It was in this home that he lived his formative years. His mother died here, and after his father remarried, his stepmother continued to encourage his love for reading and learning.

In the visitor center, watch the orientation film and then browse the exhibits in the small museum. Afterward, walk the path to the farm. You’ll pass the small museum where Nancy Hanks Lincoln, Abraham’s mother, is interred.

A replica of the family’s cabin and other farm buildings stand a short distance from what is believed to be the exact site of the family’s home. In season, the land becomes a working farm, with work done as it was done in Lincoln’s days.

Walk the mile-long Trail of Twelve Stones. Near each stone on the path a sign indicates the stone’s significance. One is a brick from Mary Todd Lincoln’s Lexington, Kentucky home. Another is a rock from the site where Lincoln orated the Gettysburg Address.

“There I grew up,” Lincoln once stated about the Indiana home.

When Lincoln was 21 years old, he moved with his family to Decatur, Illinois. They lived here only one year, suffering through the hard winter of 1830-31. When his family moved on, Abraham stayed in central Illinois.

The home site is marked by a sign in the Lincoln Homestead Trail State Park. 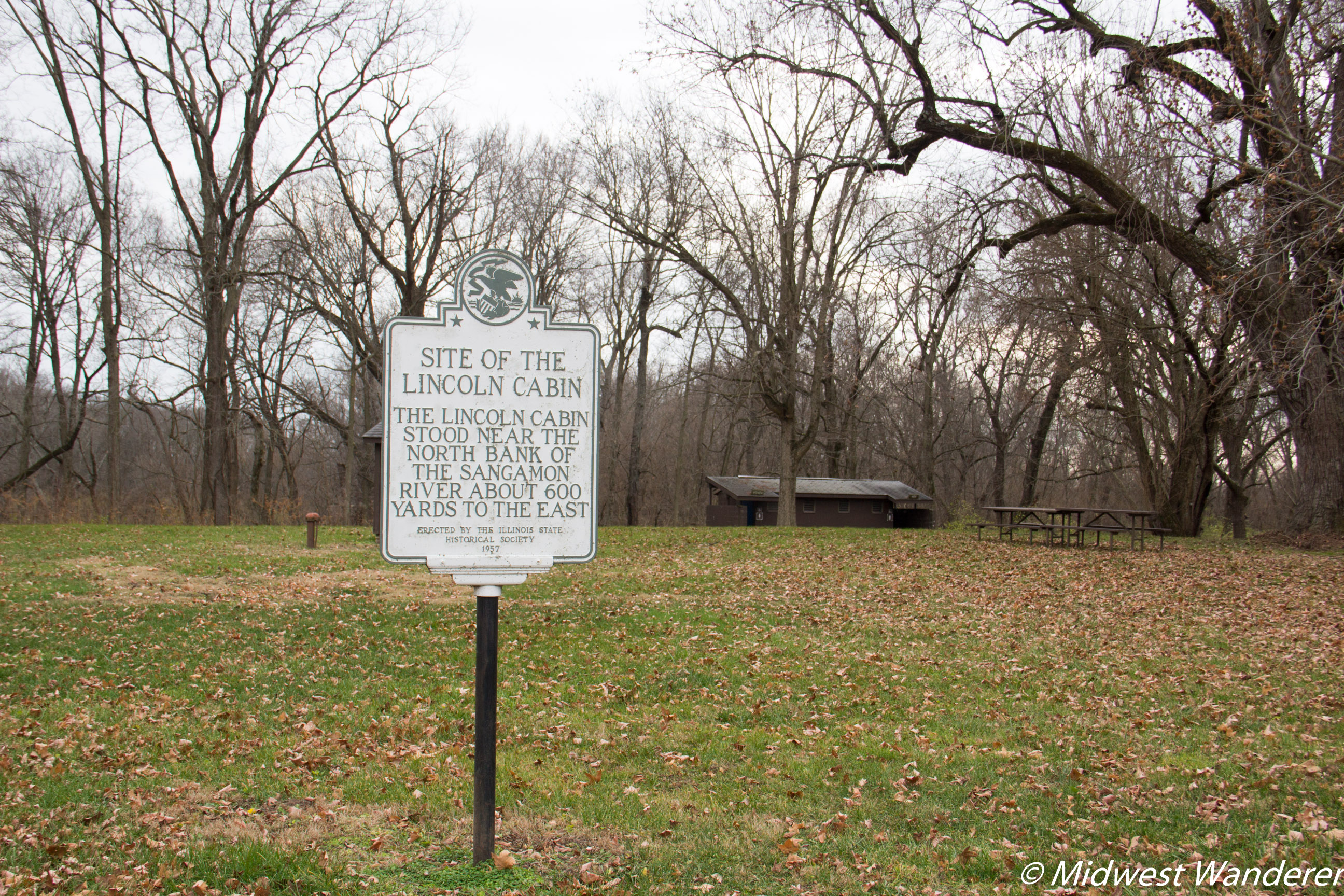 When Lincoln left the family nest, he took on a job as a float boatman. The man he worked for, Denton Offut, subsequently opened a store in New Salem, Illinois, and hired Lincoln to work as a clerk. During his years in New Salem, Lincoln worked at a second store, was a surveyor, postmaster, and a captain in the Black Hawk War.

In the reconstructed New Salem, visit over twenty recreated log buildings and watch artisans ply their crafts. One building is rebuilt on its original foundation. The others were constructed according the historic plat. 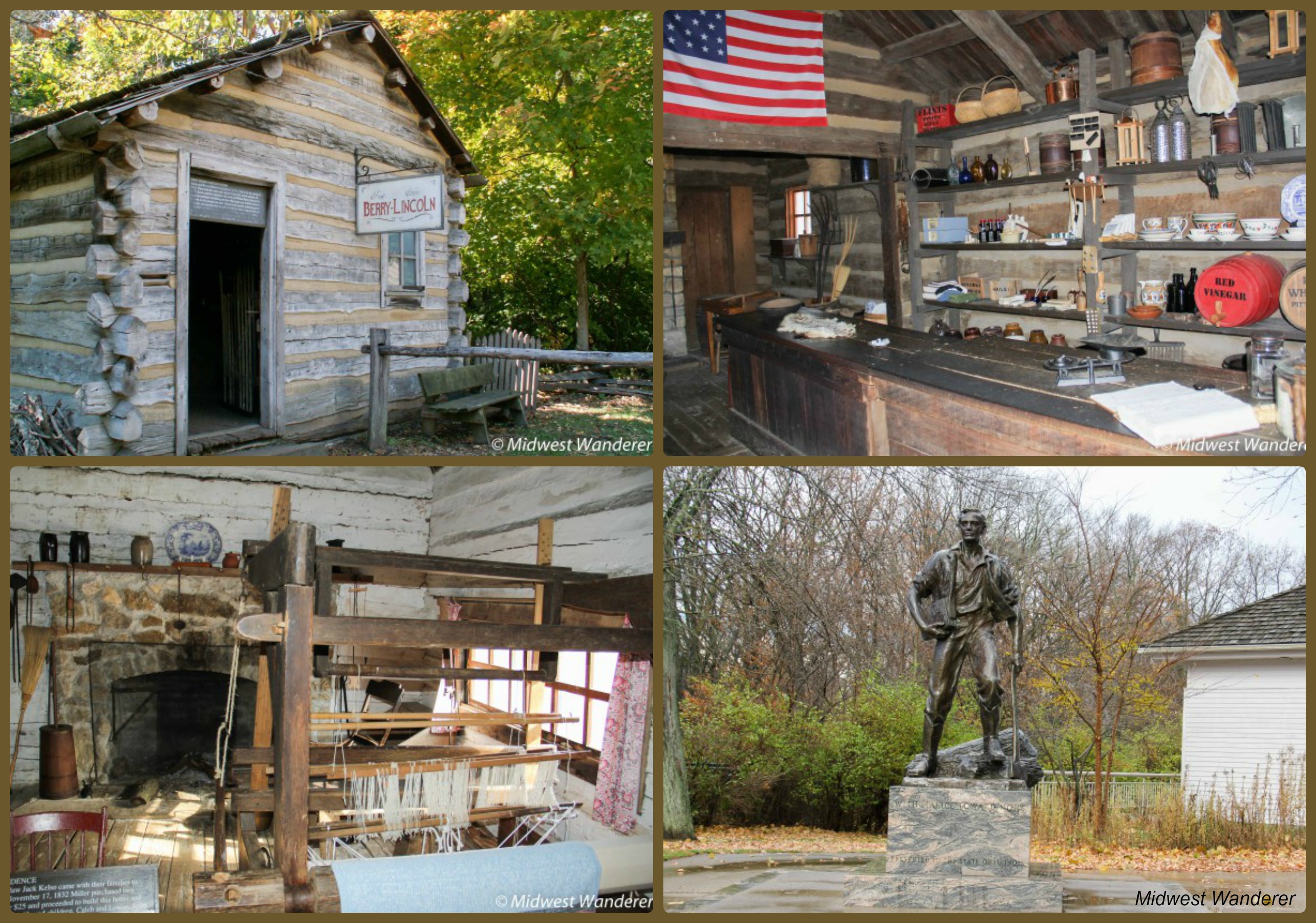 The only home that Abraham Lincoln ever owned is in Springfield, Illinois. He lived here for seventeen years prior to being elected President. The home started out a modest size. As the family grew and Lincoln’s law practice flourished, Lincoln added onto the home.

Today the home and the area around it make up the Lincoln Home National Historic Site. Stop first at the visitor center to get a tour ticket. Tours are free (although there is a parking fee), but tour sizes are limited. On busy in-season weekends, go early to get tickets for your desired tour time.

The home includes several of the family’s possessions. The only one you can touch is the railing going upstairs. The railing is original to the house. 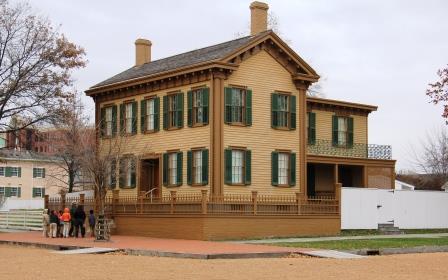 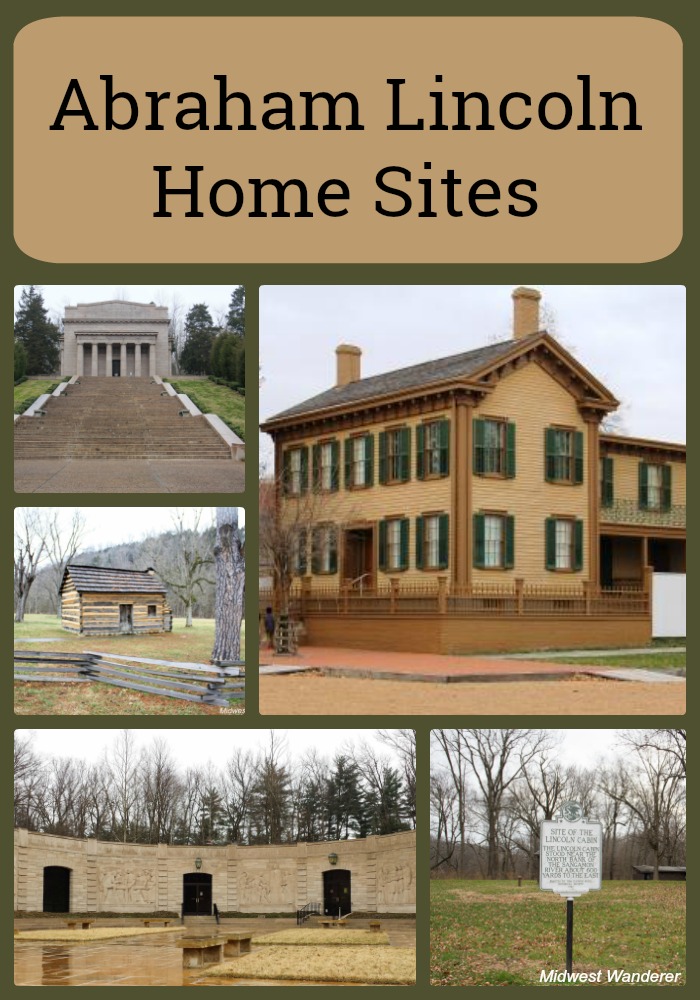 Disclosure: This article contains affiliate links. If you make a purchase via the links in this page, I will receive a small commission, at no additional cost to you.

Thank you for reading Midwest Wanderer. Don’t miss a post. Enter your e-mail address below and click Subscribe. I’ll then notify you whenever I publish another post. Subscription is FREE. After subscribing, be sure to click the link when you get the e-mail asking you to confirm.   – Connie

Before this summer, I knew little about Wild Bill Hickok. Then, within just a few weeks, we visited three places within Kansas and Illinois that all shared Hickok stories—quite a coincidence. I learned several fascinating facts about him. Here are END_OF_DOCUMENT_TOKEN_TO_BE_REPLACED