The last stop on our tour of the Villages of Van Buren was the Bentonsport historic district, first developed by Mormon craftsmen as they migrated west along the Mormon trail in the mid-1800s. Steamboats no longer ply the nearby Des Moines River, but the historic district is still bustling. Refurbished buildings are now home to galleries, a candy shop, and a haunted bed and breakfast.

This is the last in a series of five posts about the Villages of Van Buren, twelve small towns in Southeast Iowa’s Van Buren County. You won’t find a stop light or a fast food chain anywhere in the county. Rather, small shops and independent restaurants take center stage. 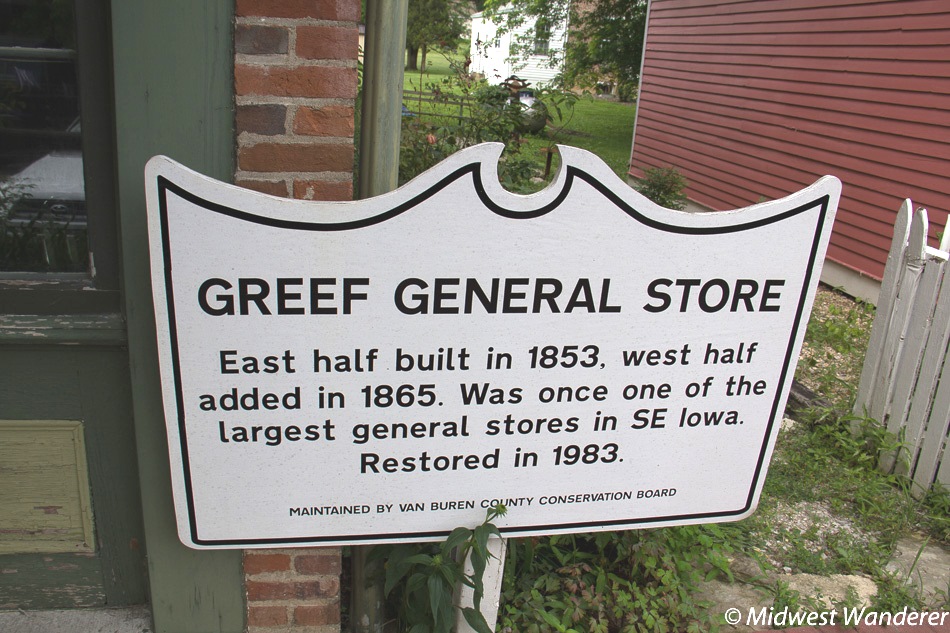 The bank building had a second floor that was used as a Masonic Hall. Today the building is the Bentonsport Artisan Co-op, where you’ll find locally made, high quality handcrafted items. 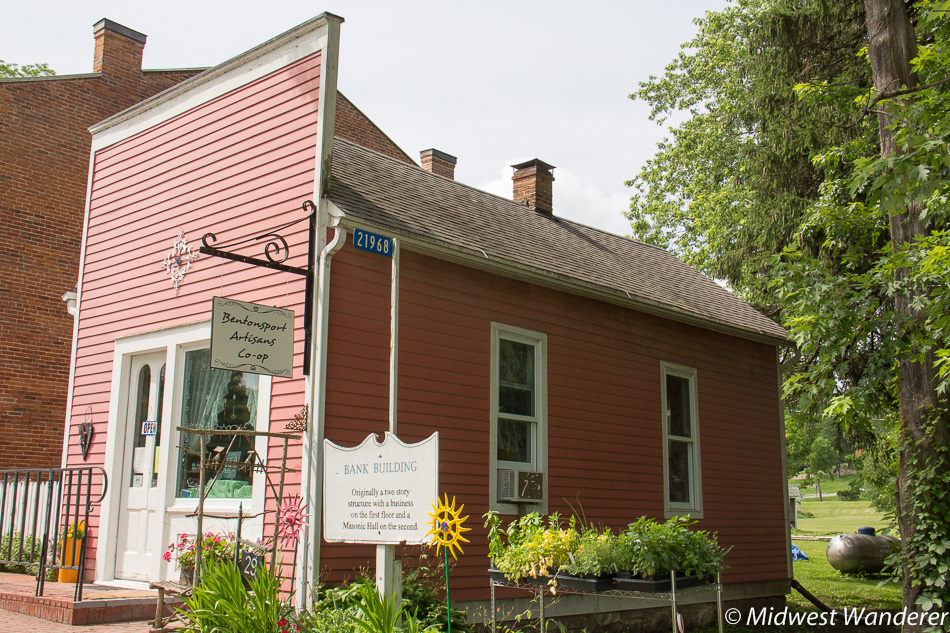 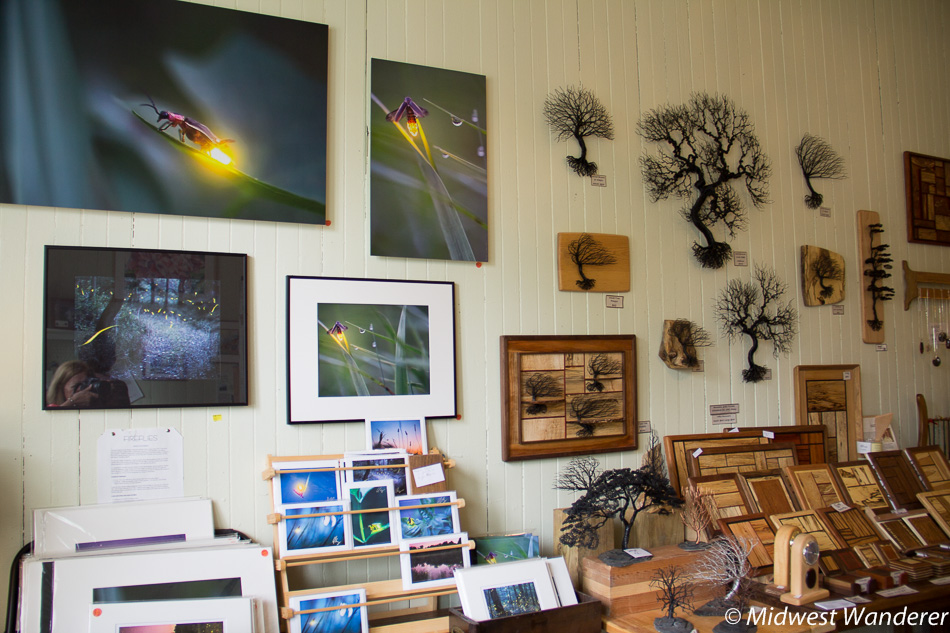 Down the road, Iron & Lace carries a unique combination of pottery, hand-woven rugs and hand-forged ironwork. The shop is owned by husband and wife team, Bill and Betty Printy. Bill is a blacksmith. Betty is a potter and weaver.

As Betty spun a bowl on her pottery wheel, she explained the steps she was taking to shape it. 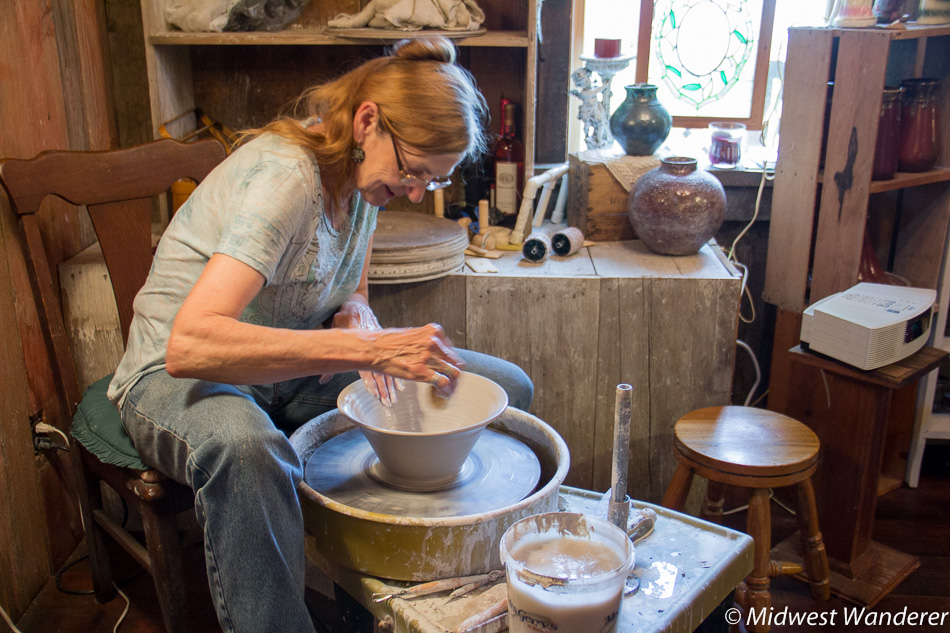 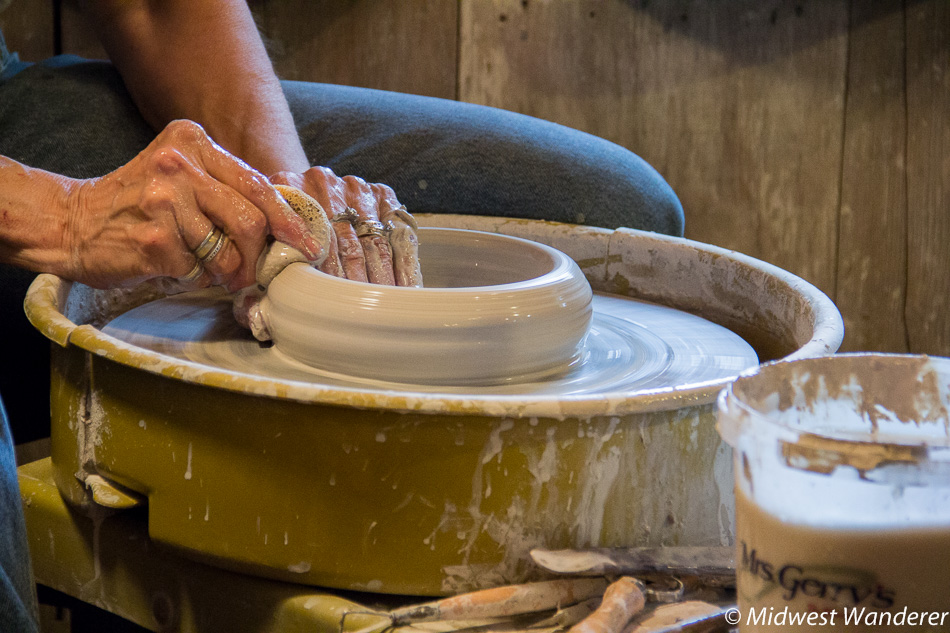 Betty also chatted with us about her other crafts, weaving and baking artisan bread. She said that weaving started out as a hobby that got out of hand and grew to ten looms and a studio. She teaches all three crafts—pottery, weaving and bread baking—through the Villages Folk School.

Following Betty’s demonstration, we walked around to the back of the building, to Bill’s blacksmith shop. Bill and his apprentice, Mark Heisdorffer, do a lot of architectural and restoration work, as well as ornamental objects to sell in Iron & Lace. At the time of our visit they had just finished a commissioned decorative railing. 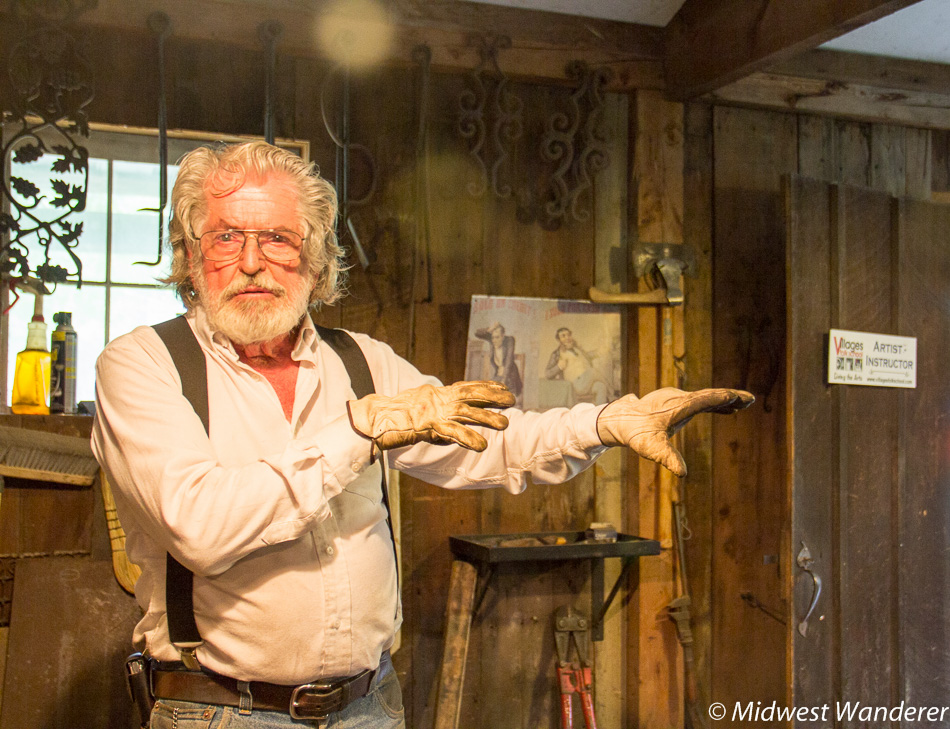 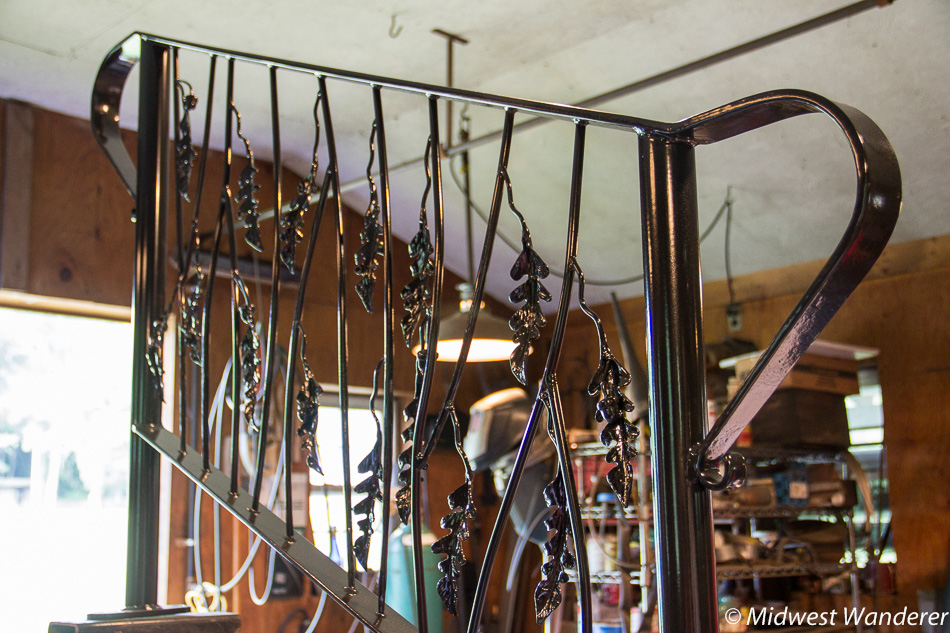 Bill has been teaching weekend blacksmithing classes for about 18 years. Five work stations, each with its own set of tools, forge and anvil allow all of the students to work without having to share. 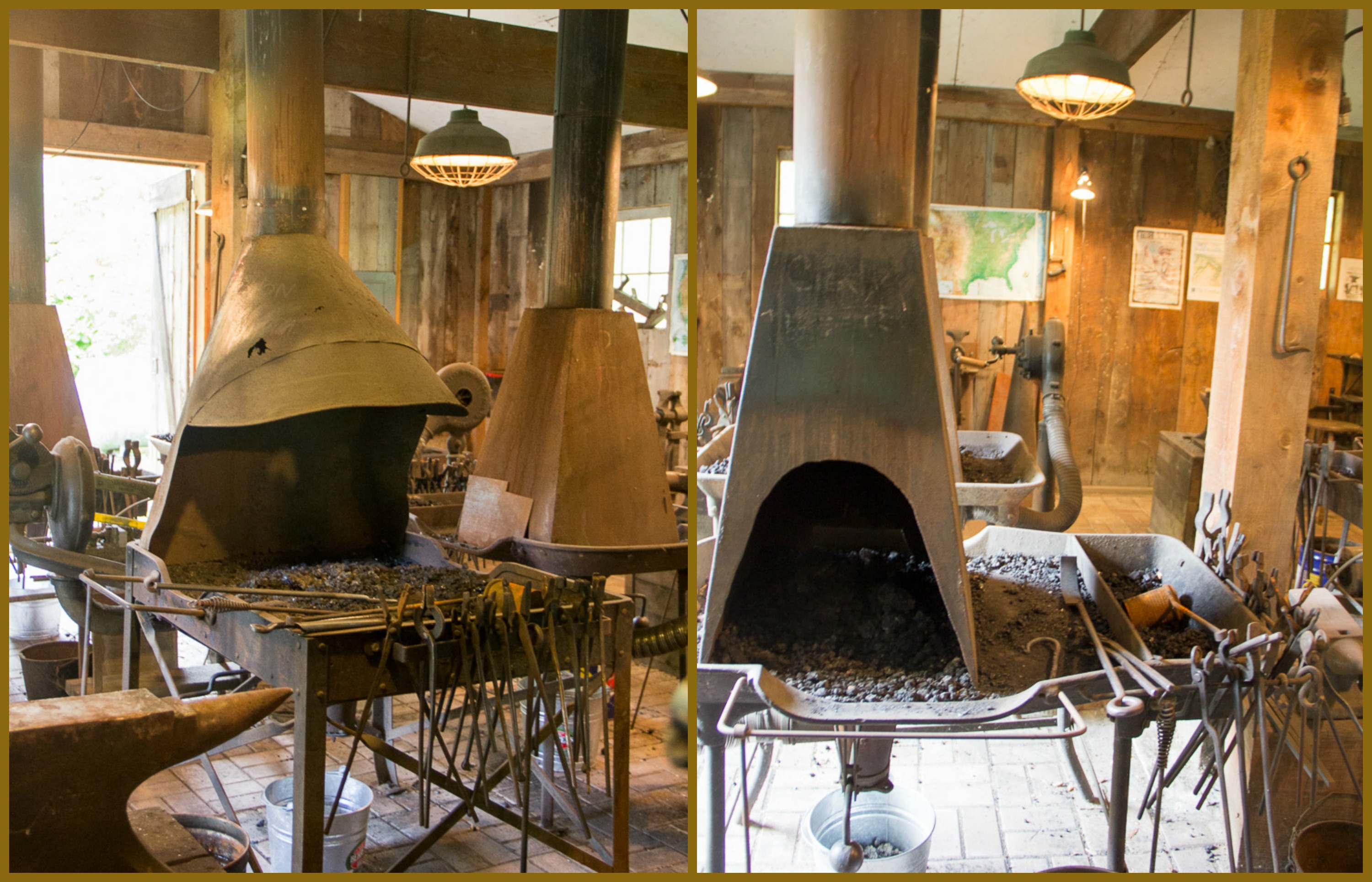 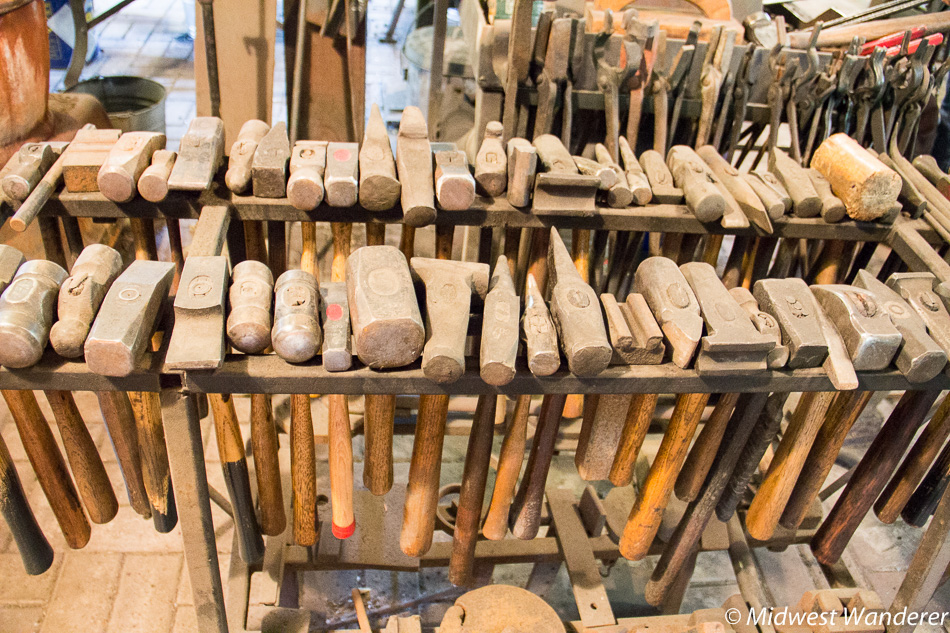 The gingerbread-trimmed Forever Sweet Creations building is so cute it’s hard to resist stopping in. Once inside, sweet aromas make it impossible to leave empty handed. The shop specializes in fudge but also sells fresh baked cookies, ice cream and other goodies. I bought and savored a caramel nut fudge candy, similar to a Turtle®. 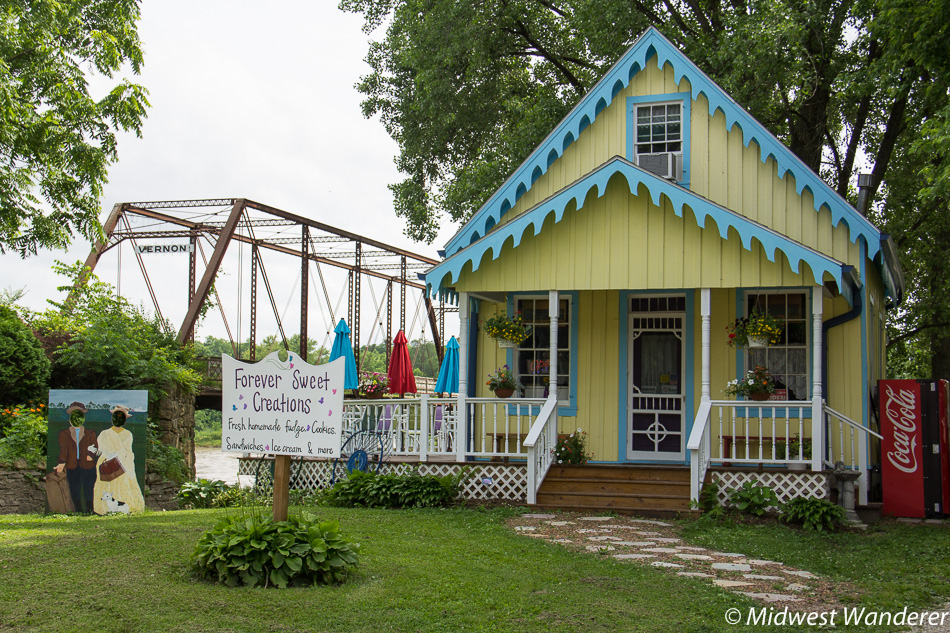 Forever Sweet Creations sits right next to the 1882 Bentonsport Bridge, which spans the Des Moines River. The bridge was operated as a vehicular bridge until 1985. In 1994 the bridge became a pedestrian walkway. 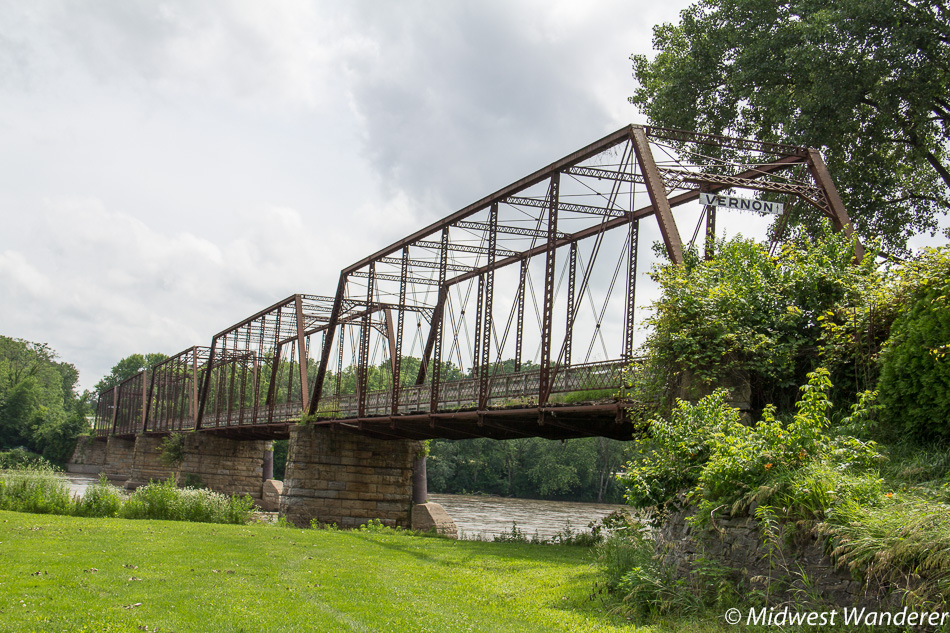 The Mason House Inn, built by Mormons in 1846, originally served as a hotel for steamboat travelers. Its history also includes use as a hospital and a station on the Underground Railroad. Rumor has it that the inn, which today is a bed-and-breakfast inn, is haunted. A woman in white is often seen in the top window. Unfortunately, she didn’t make an appearance while I stood outside snapping photos. 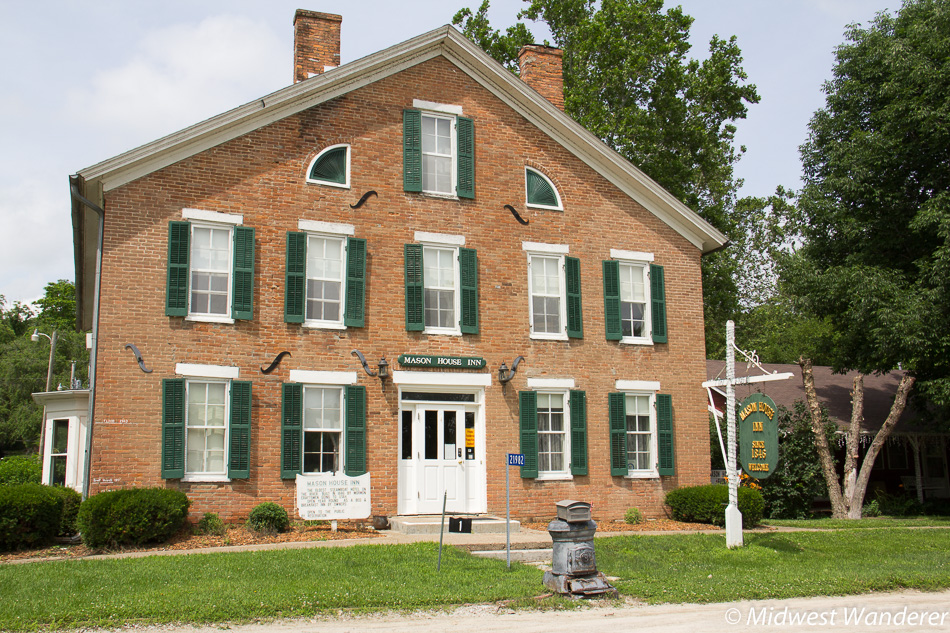 The shops and bed-and-breakfast are located on Hawk Drive in Bentonsport, Iowa, on the banks of the Des Moines River. Some shops are open seasonally. Check the individual business web sites. Also check the Bentonsport Historic District web site for a full list of shops.

Disclosure: My visit to Bonaparte Retreat was hosted by the Iowa Tourism Office and the Villages of Van Buren, but any opinions expressed in this post are my own.

One thought on “Exploring the Bentonsport Historic District”

Before this summer, I knew little about Wild Bill Hickok. Then, within just a few weeks, we visited three places within Kansas and Illinois that all shared Hickok stories—quite a coincidence. I learned several fascinating facts about him. Here are END_OF_DOCUMENT_TOKEN_TO_BE_REPLACED