Continuing our tour of southeast Iowa’s Villages of Van Buren, our next stop was an 1800s restored stone building. This is where we would learn about the Villages Folk School and try our hands at a printing press.

This is the fourth in a series of five posts about the Villages of Van Buren, twelve small towns in Southeast Iowa’s Van Buren County. You won’t find a stop light or a fast food chain anywhere in the county. Rather, small shops and independent restaurants take center stage.

The idea behind the Villages Folk School was to unite the villages of Van Buren County. Although each of the twelve communities has its own flavor, one thing they have in common is creative artists and artisans. So in 2008 a group of local residents who saw a need for traditional arts and history to be preserved moved forward with a folk school and building preservation project, raising funds through grants.

Grant money was used to restore five historic buildings. The Mormon House, where we were meeting, is one of those buildings. Local legend says that Mormons, who settled in the area for several years during their migration along the Mormon Trail, constructed the building. It was used to house railroad workers as the railroad was being built. Before preservation, the building had been abandoned for years, with windows boarded up and small animals making it their home.

Although some of the folk school’s 100-plus classes, which range from basket weaving to blacksmithing, are held in the restored historic buildings, most are held in the artists’ and artisans’ own studios or homes. There is no formal school building. The school’s motto is “The County is Our Campus.”

Classes are held on weekends year-round, making a perfect opportunity for a weekend getaway. The relaxed rural setting takes you back to a simpler time, as do the classes in traditional arts and crafts like quilting and pottery. Weather permitting, some classes are held outdoors. Villages Folk School has recently begun offering accredited courses, allowing students to earn college credits.

Visiting with the artists

Sculptor Chris Bennett’s studio is adjacent to the Mormon House, so we walked over to chat with him and see some of his work. Chris specializes in commemorative bronze and classic wildlife monumental sculpture for his livelihood. The classes he teaches for the Villages Folk School use a simpler medium, clay. He offers a basic clay sculpture class and a couple of advanced-level classes.

Mel Stockwell, whose studio is on her farm, rescues old printing presses, restores them, and teaches classes on printing with them. Mel brought one of her smaller presses to the Mormon House to give us a demo and let us try it out. It was the kind of press that you would have found in the back of a general store or a hardware store on which the store owner would create signs for displays or the shop windows.

It took hours back in the day to set up a press, as each individual letter block had to be set into place. When the printing was finished, each block had to be cleaned with kerosene and placed back in its appropriate drawer in the case.

After Mel demonstrated how the printing press works, we had a chance to use it. I was surprised at how difficult it was to push the roller across the press. 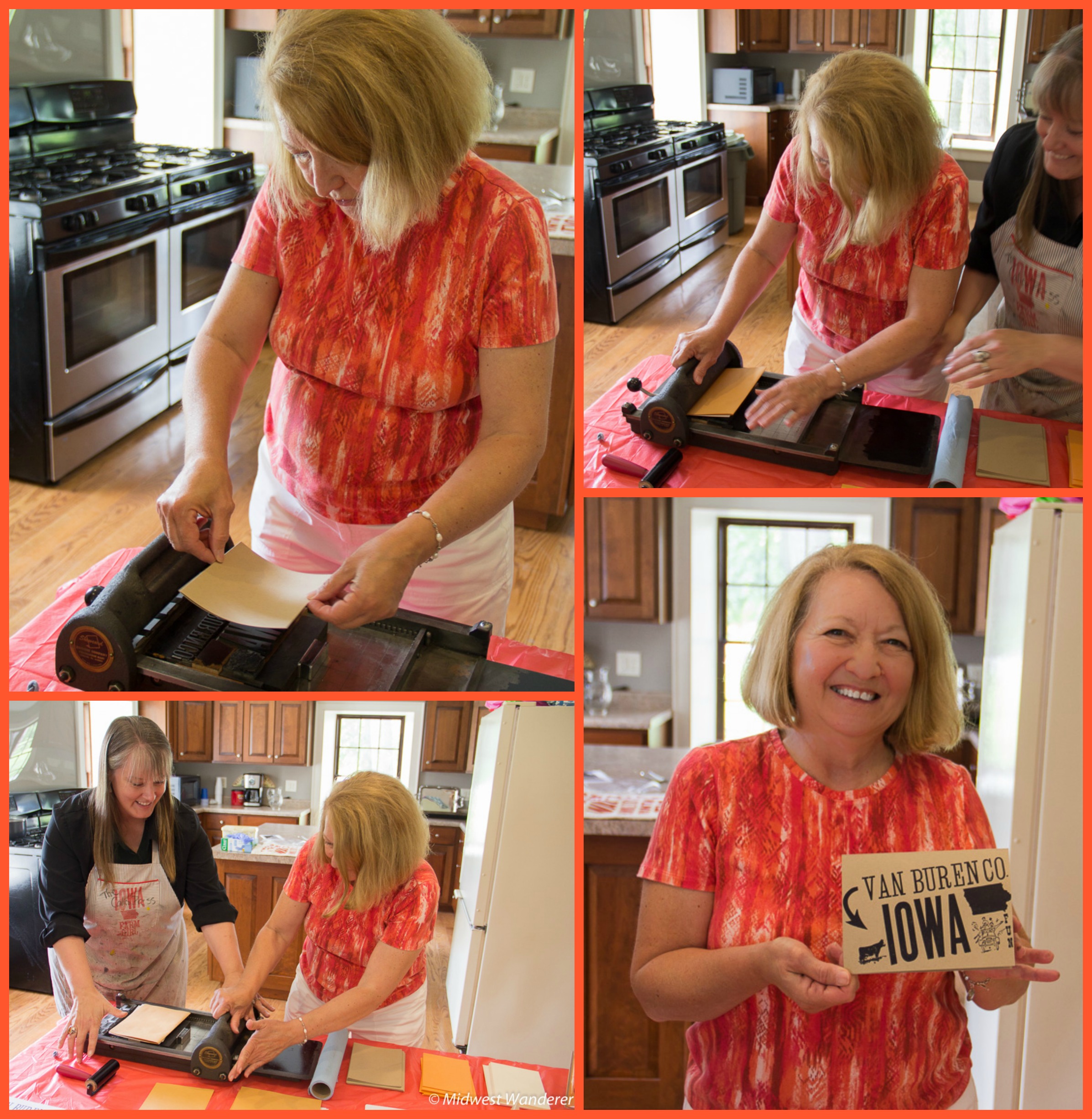 More trivia: Punctuation marks and special characters were called “sorts.” Nothing was more annoying to a typesetter than to get to the end of an article and find out he was out of periods. Thus, the term, “out of sorts.”

For further information about classes, including a full class list and schedule, visit the Villages Folk School web site. The site also includes a Visitor Info menu with links to lodging and other Villages of Van Buren community information.

Disclosure: My visit to Bonaparte Retreat was hosted by the Iowa Tourism Office and the Villages of Van Buren, but any opinions expressed in this post are my own.

Before this summer, I knew little about Wild Bill Hickok. Then, within just a few weeks, we visited three places within Kansas and Illinois that all shared Hickok stories—quite a coincidence. I learned several fascinating facts about him. Here are END_OF_DOCUMENT_TOKEN_TO_BE_REPLACED