The stadium was quiet on this late October morning, deserted except for a lone maintenance man. Vintage billboard signs that usually line the outfield fence had been taken down to be touched up. There were no roaring crowds or ballplayers in knickered uniforms. But standing in the outfield, looking into the dugout, took me back to the most famous scene of the 1992 movie A League of Their Own, which was filmed here at League Stadium in Huntingburg, Indiana. 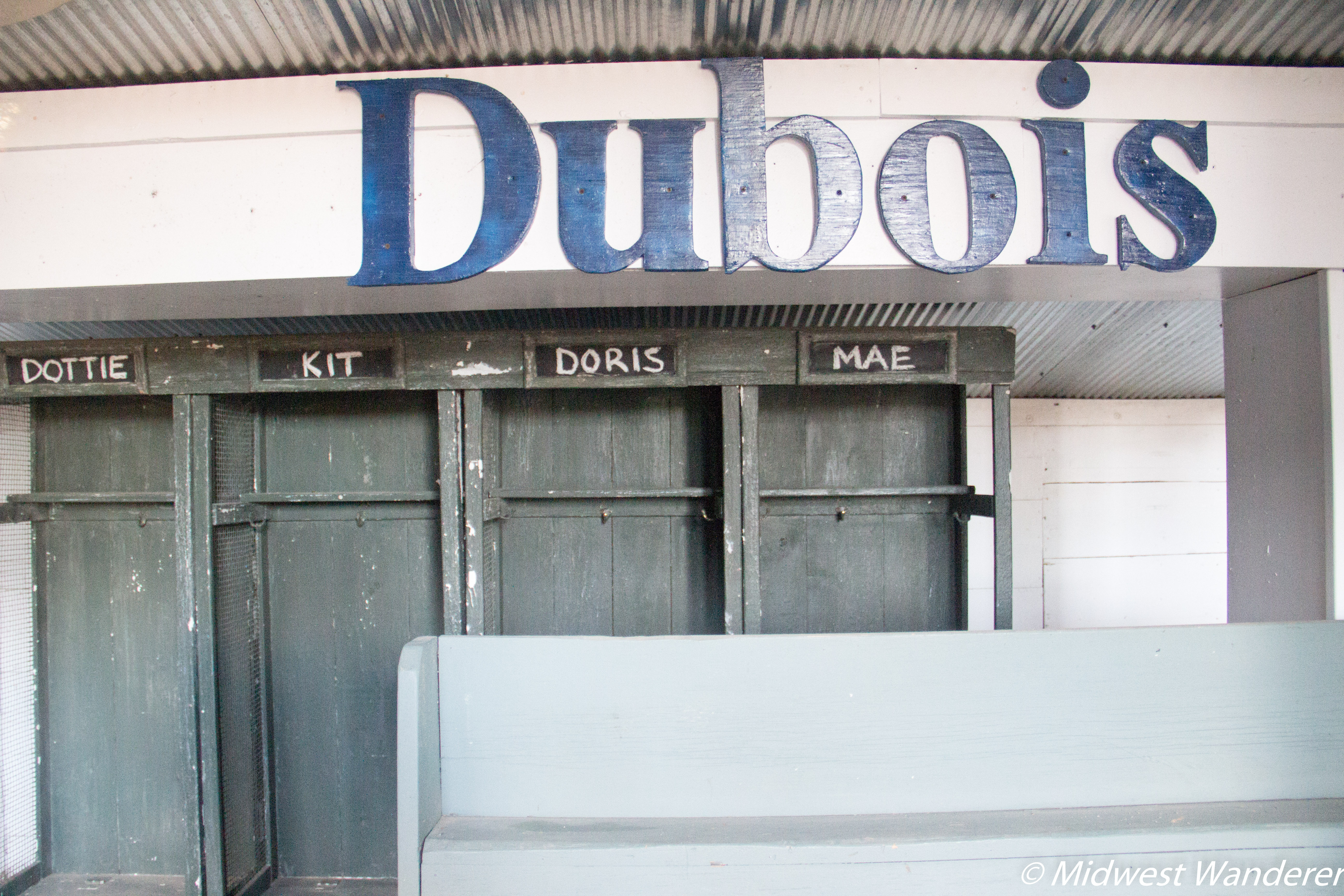 There’s no crying in baseball.”
—Tom Hanks as Jimmy Dugan in A League of Their Own

League Stadium, built in 1894, was originally used for various events: shows, races, local fairs, and of course, baseball. Baseball teams played there regularly through the 1950s. However, after a while, the stadium was used only for the local high school baseball team.

…And then Hollywood came.  With extensive reconstruction, League Stadium was ready for the movies. The 1991 Hollywood rebuild and expansion took the stadium to a retro 1940s look. The stadium became the home team field for the Rockford Peaches in A League of Their Own, the movie starring Tom Hanks, Geena Davis and Madonna. 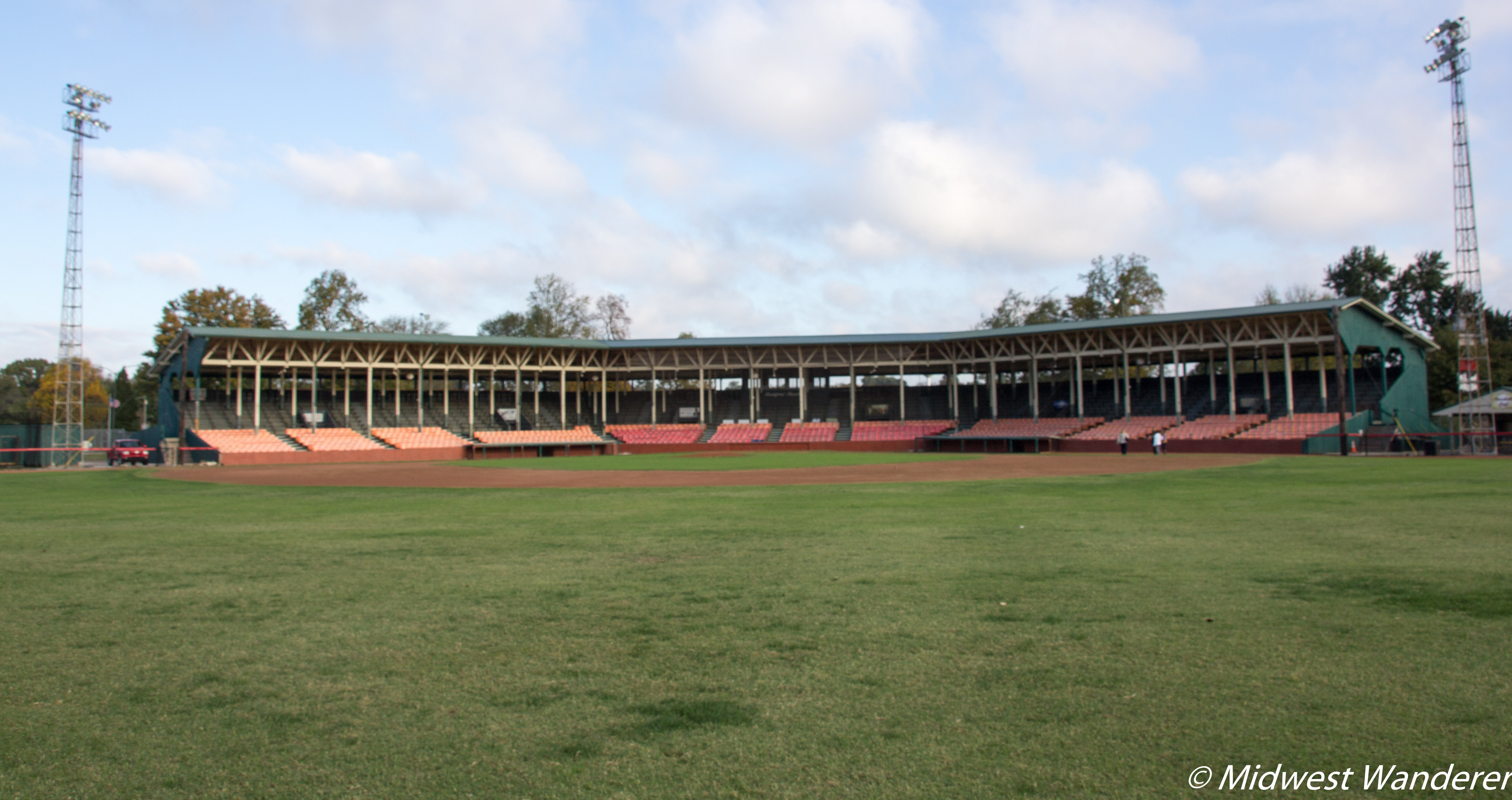 One of our guides for the day, Shannon, said they filmed home field scenes in the stadium for a week. Shannon was an extra in the film, a fan sitting in the stands. Talking about the “no crying in baseball scene,” Shannon said, “It literally took three days for that one little scene. A lot of cuts. I think I remember the number 80 at one point.” 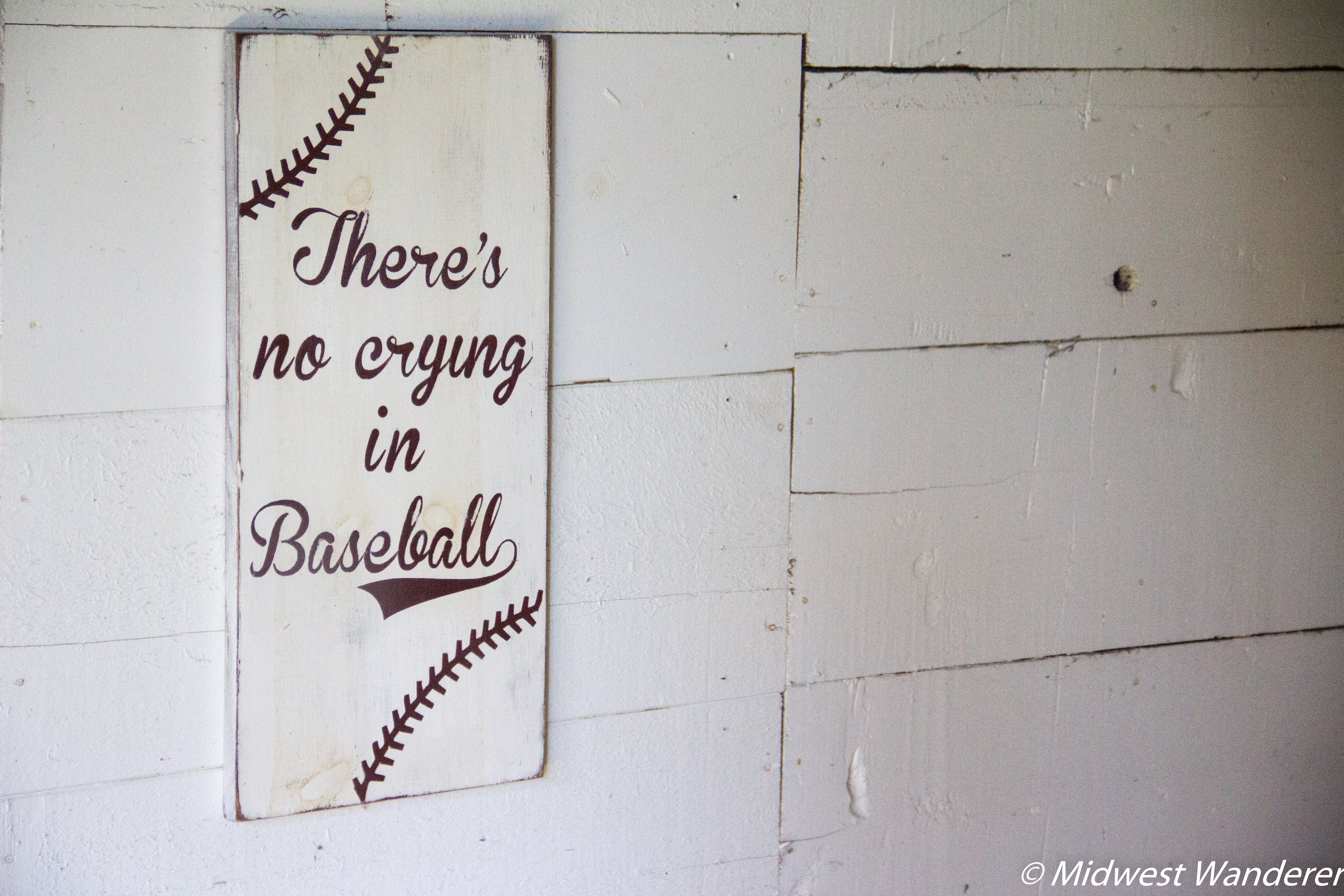 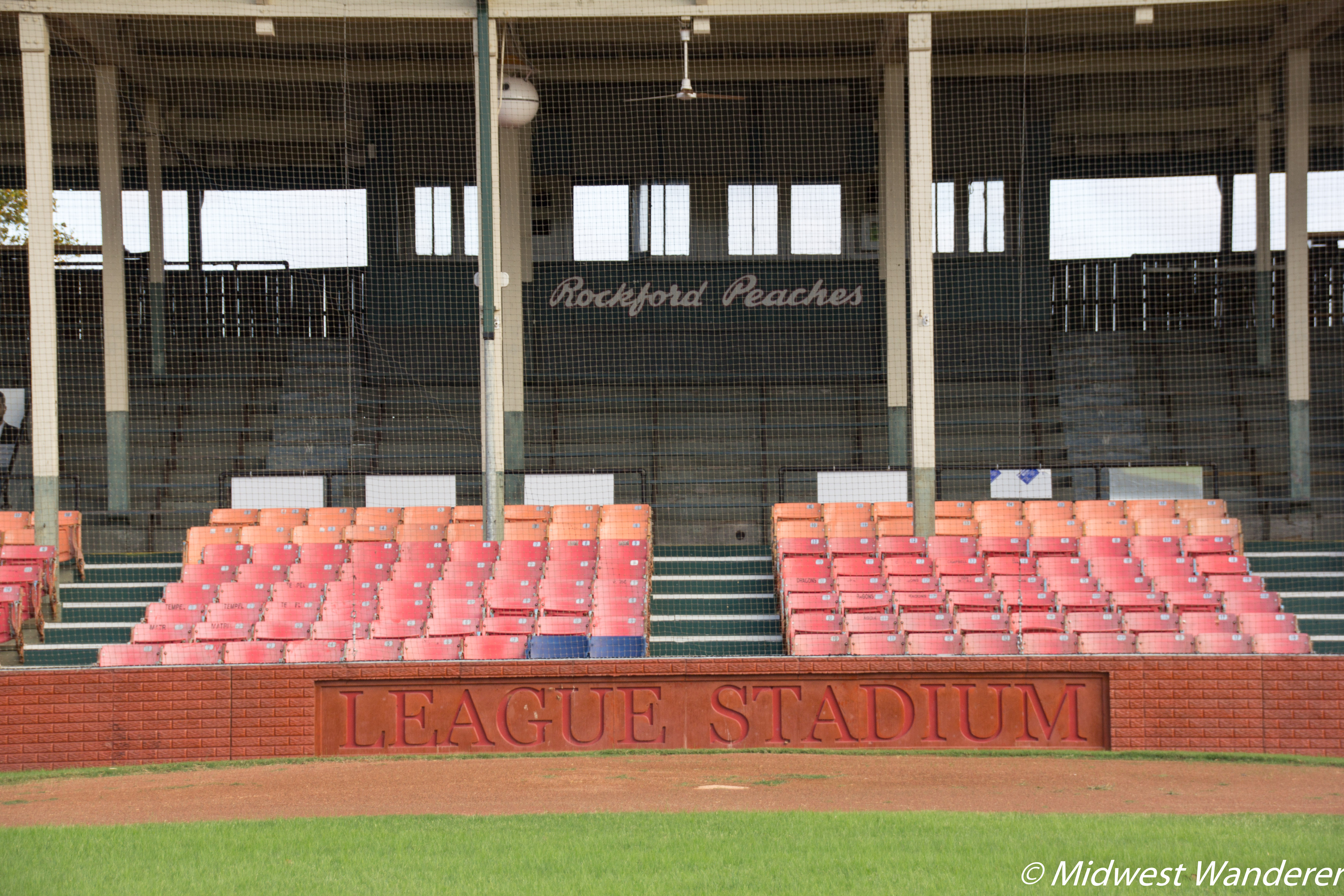 Home of the Dubois County Bombers

Huntingburg has been enjoying their expanded stadium since Hollywood left. It has been home to two minor league baseball teams, and now the Dubois County Bombers, a collegiate-level team. Part of the Ohio Valley League, the DC Bombers maintain the throwback look of 1940s baseball. The team wears retro uniforms similar to those worn in the 1940s. You’ll even find the Peaches at the games, dressed in outfits like the Rockford Peaches wore in the movie. The Peaches entertain fans and cheer on the team.

Like most minor league and collegiate league teams, Dubois County Bombers games are family events with theme nights like Christmas in July and contests for kids between innings.

I’m looking forward to returning to Hungtingburg next summer to watch a Dubois County Bombers game in League Stadium, where every game night is “throwback night.”

Accommodations: We stayed at the Hampton Inn Jasper during our visit to Dubois County. Find the best hotel deal, compare prices, and read what other travelers have to say at TripAdvisor. 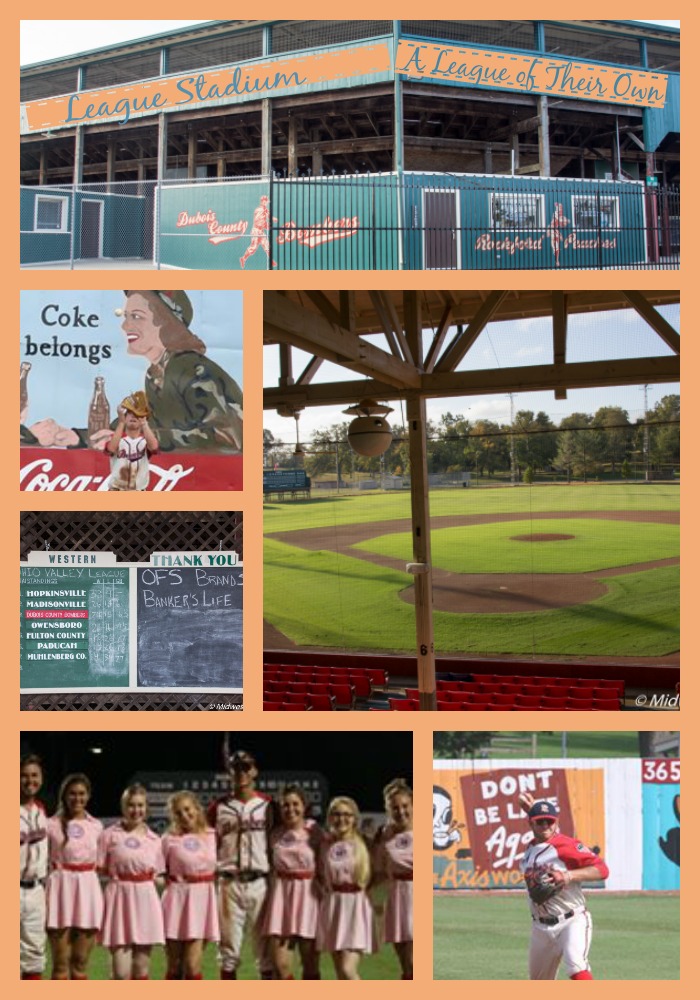 Disclosures: Visit Dubois County hosted my Dubois County visit. However, any opinions expressed in this article are my own.
This article contains affiliate links. If you make a purchase or book a room through these links, I will receive a small commission at no additional cost to you.

4 thoughts on “League Stadium: Where ‘A League of Their Own’ was Filmed”

Before this summer, I knew little about Wild Bill Hickok. Then, within just a few weeks, we visited three places within Kansas and Illinois that all shared Hickok stories—quite a coincidence. I learned several fascinating facts about him. Here are END_OF_DOCUMENT_TOKEN_TO_BE_REPLACED