For years I worked just down the street from the Gemini Giant that stands on the edge of the Launching Pad parking lot. I frequently ate lunch at the Launching Pad, a now-closed fast-food diner on Route 66 in Wilmington, Illinois, but I never thought about the history of the oversize figure. It turns out he’s one of many Muffler Men, 14- to 25-foot tall fiberglass advertising icons produced by International Fiberglass in Venice, California, from 1962 to 1972. The Gemini Giant was repainted to fit the Launching Pad space theme, the space helmet was added and a rocket placed in his hands.

Once we learned about the Muffler Men, we started seeking them out on our travels. We found six over the past year, all of them on or near Route 66. Some we planned to visit and some we stumbled across.

The giant icons became popular with automotive businesses, many of them holding tires or full-size mufflers, which is how they commonly became known as Muffler Men. Of the six giants we found, two were standing outside of automotive business. One was a patriotic version holding a flag at Lauterbach Tire & Auto Service in Springfield, Illinois. The Lauterbach Muffler Man lost his head in a 2006 tornado but has since been repaired. 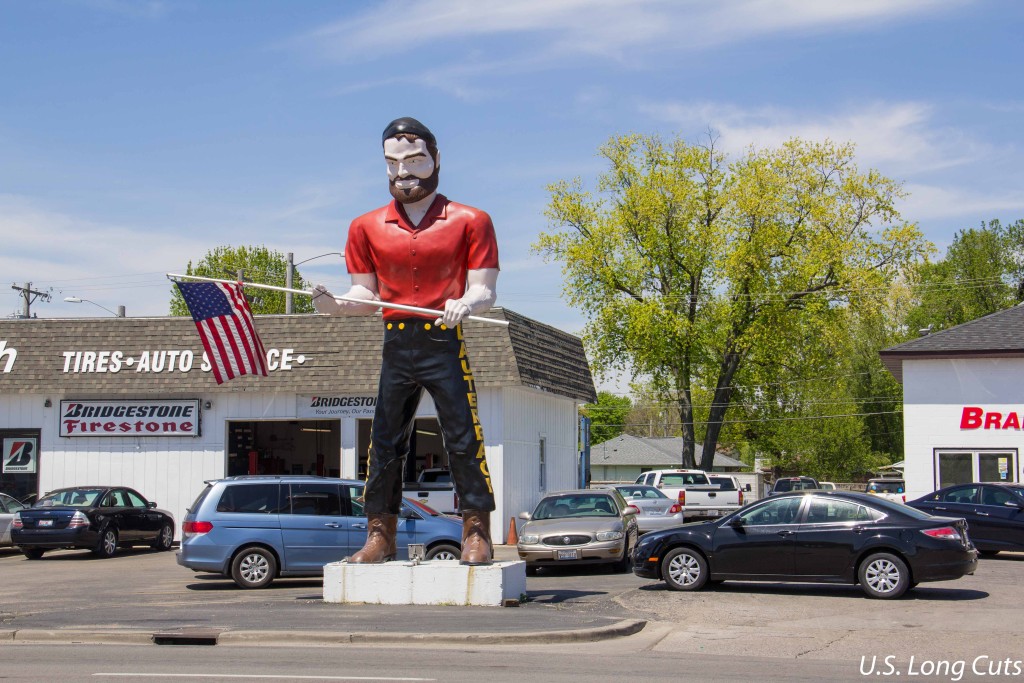 The other automotive-related Muffler Man we found was in Gallup, New Mexico, just off Route 66, at John’s Used Cars. This figure is a cowboy, one of several variants produced by International Fiberglass. 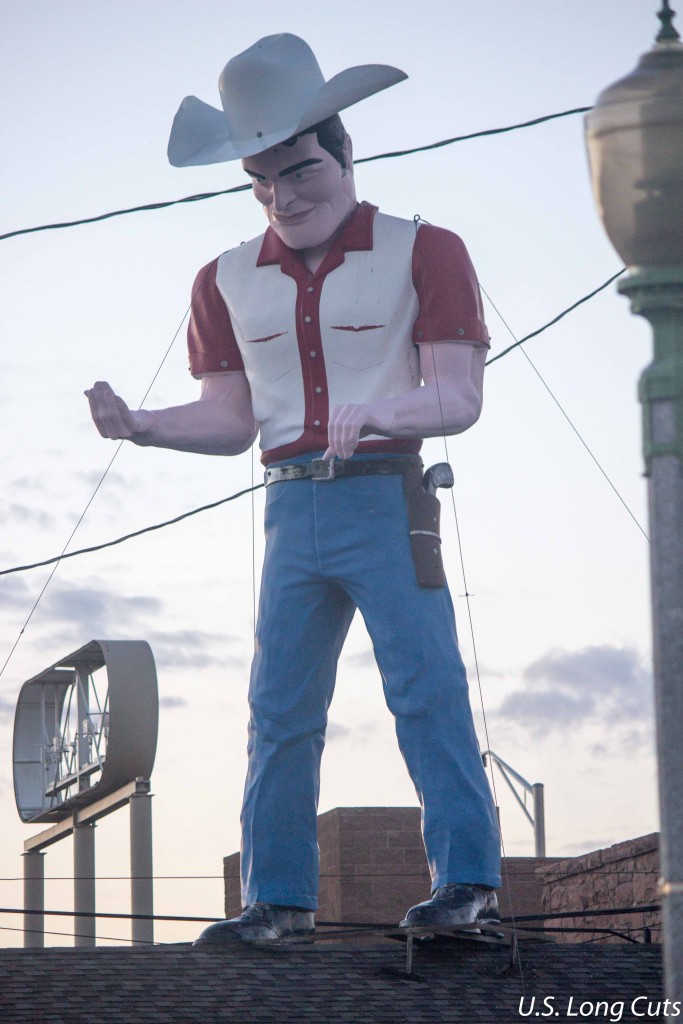 On Route 66 in Atlanta, Illinois, the giant holds a hot dog. This one stood in front of Bunyon’s in Cicero Illinois, from 1965 to 2003. When the business was sold, owner H.A. Stephens loaned it to Atlanta. 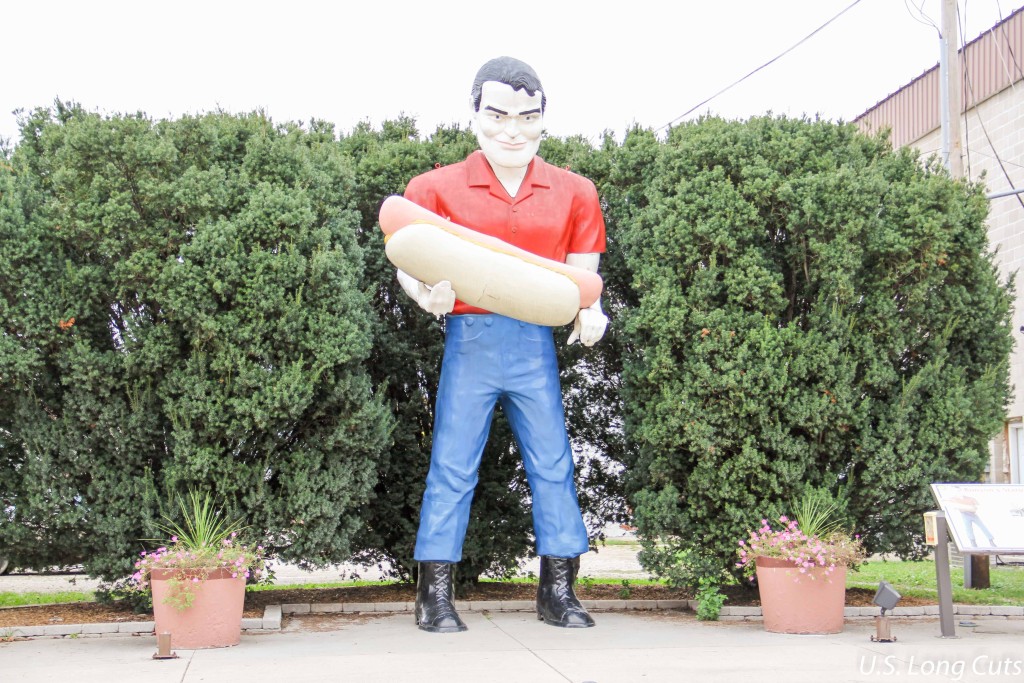 Another Muffler Man we stumbled across stands near the Pink Elephant Antique Mall in Livingston, Illinois. The empty-handed figure, sporting a Harley Davidson shirt, is a shorter version of the statue. 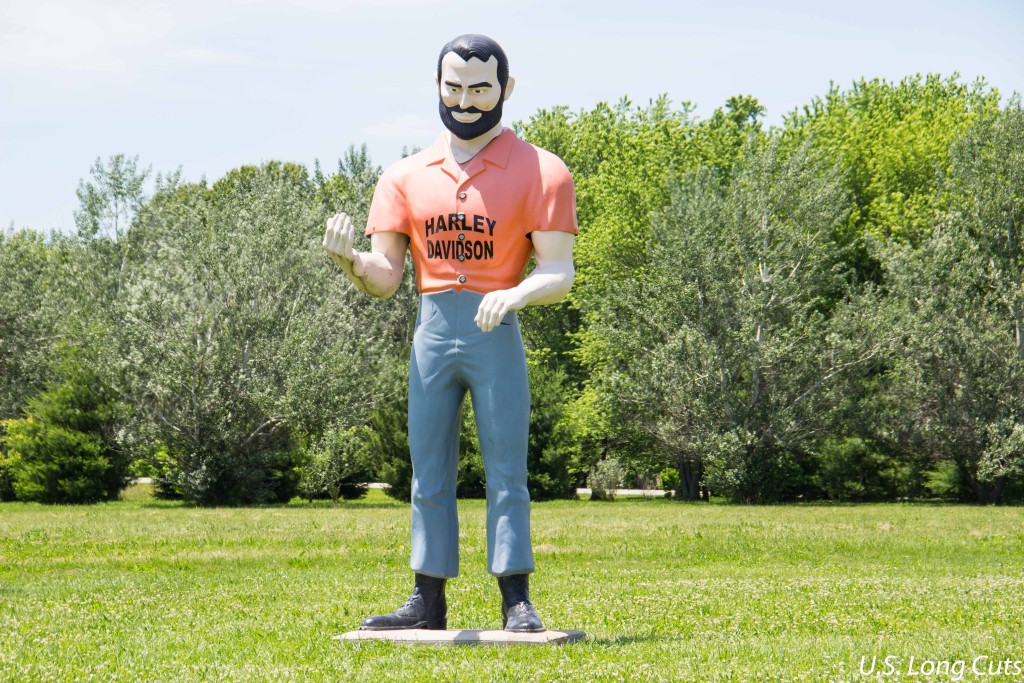 Now that we know that hundreds of the Muffler Men still exist and we know how to identify them (one hand facing downward, one upward; strong jaw, head tilted forward a bit; big clunky shoes), we’re always on the lookout for them as we cruise the country. It’s become somewhat of a game; hopefully it won’t turn into an obsession.

Before this summer, I knew little about Wild Bill Hickok. Then, within just a few weeks, we visited three places within Kansas and Illinois that all shared Hickok stories—quite a coincidence. I learned several fascinating facts about him. Here are END_OF_DOCUMENT_TOKEN_TO_BE_REPLACED