What better place to hold a murder mystery dinner than a haunted castle, especially as a prelude to a ghost tour? A murder mystery would certainly set the mood for the haunted tour that we would attend later that night. We approached the daunting limestone Pythian Castle just before dusk, walking up the stairs toward the massive wooden entrance doors.

Inside the castle and in queue to check in for dinner, I took a quick look around the expansive entry hall and spied a suit of armor in the corner. A castle isn’t complete without a suit of armor. 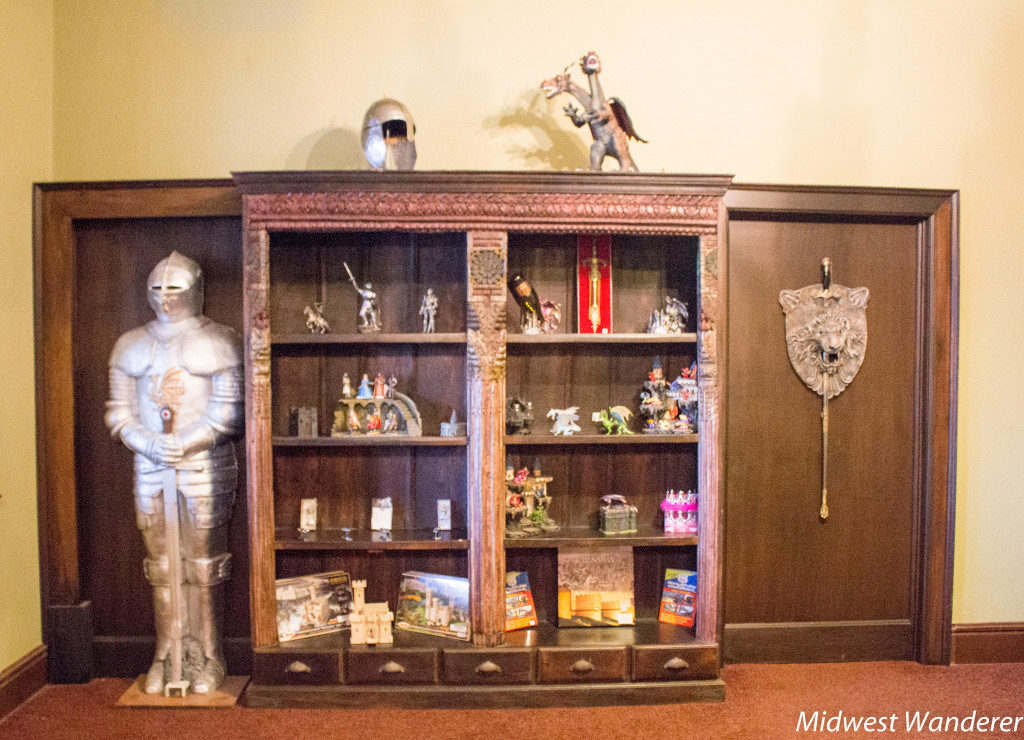 A guy wearing a bad wig assigned the roles we would play: I was Bossie Jo Bratley and Skip was Opie—with a speaking part. It turns out Wig Man was playing the part of Andy and would later play Barney. Okay, so much for setting a scary mood. This was going to be light-hearted fun. 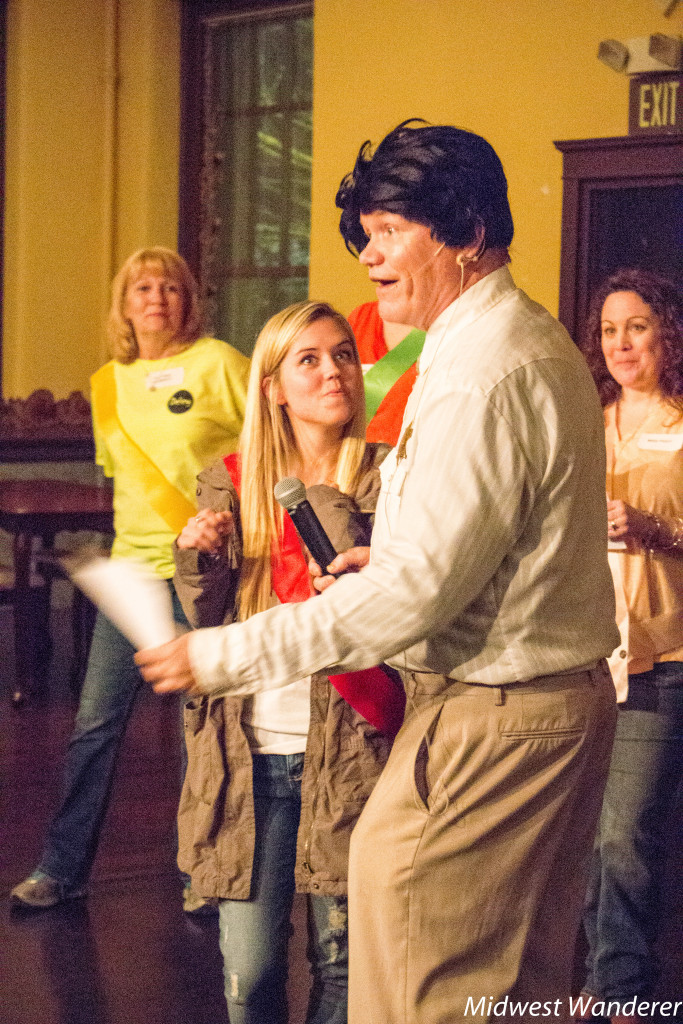 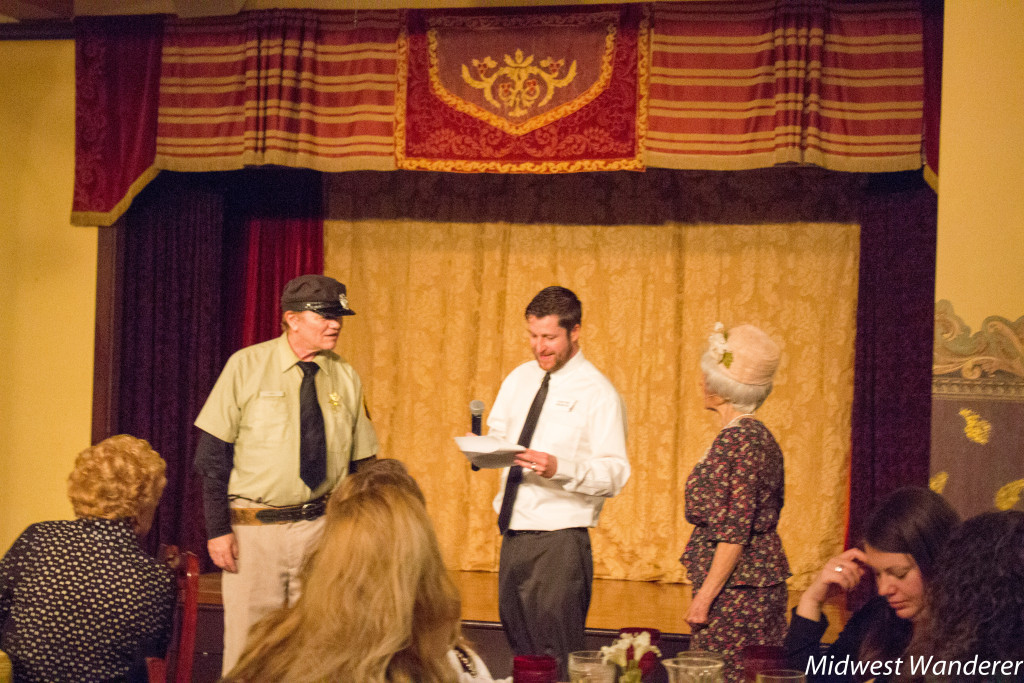 I’d been to a couple of murder-mystery dinners before, but none where every guest played a role. The play combined spoofed characters from the old Andy Griffith Show and Petticoat Junction sitcoms, as well as real-life celebrity names with a comical twist. During the pre-show cocktail mix-and-mingle time we were given tasks. I was to find Goober and Gomer, both eligible bachelors, since my mom was trying to get me and my fifteen sisters married off. Goober and Gomer were nowhere to be seen, although they ended up sitting at the table next to us during dinner.

The play took place between meal courses, which began with a salad and rolls. The entrée was served buffet style. According to the Pythian Castle web site, the meal varies but always consists of a chicken dish, vegetables and potatoes, with vegetarian options available upon request. We had chicken-fried chicken, mashed potatoes and fresh mixed vegetables. Dessert was an ooey-gooey rich chocolate cake, the consistency of a fudge brownie. 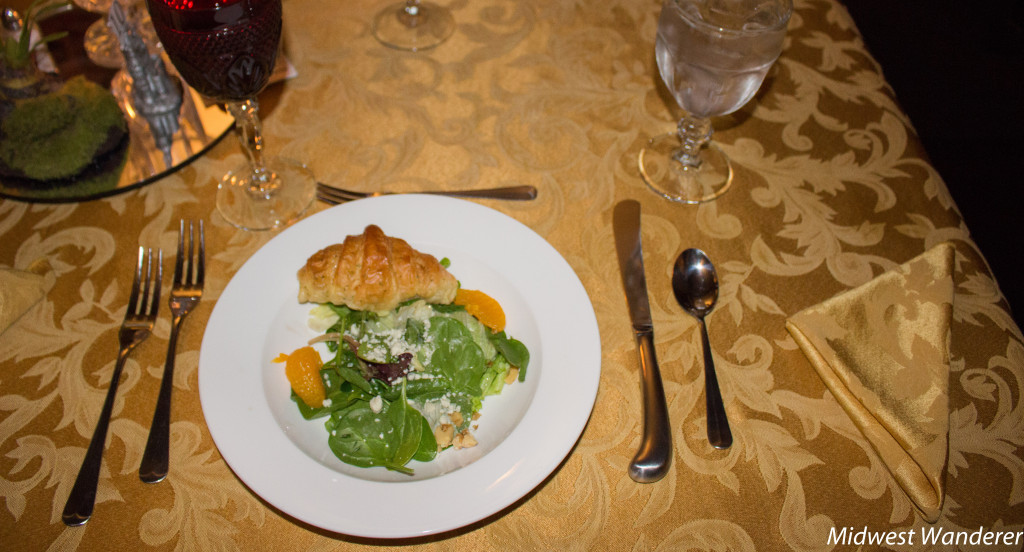 During dessert we filled out slips of paper indicating who we suspected as the murderer. Of those who guessed correct (neither Skip nor me), a name was drawn for a prize.

The play was corny, yes, but the silliness was perfect for audience participation. Of the three murder mystery dinners I’ve been to, the one at Pythian castle was most entertaining.

Pythian Castle holds a murder mystery dinner once a month, always on a Friday evening. Check the web site for the schedule or to make reservations.

What about the ghost tour? Now that was eerie. I’ll tell you about it in my next blog post.

Disclosure: My visit to Pythian Castle was hosted by the Springfield Missouri Convention and Visitors Bureau and Pythian Castle, but any opinions expressed in this post are my own. Photos by Skip Reed.

Other articles that may interest you:

Farmers Market of the Ozarks: A Foodie’s Gold Mine

A Nostalgic Stay at the Rote 66 Rail haven Motel in Springfield, Missouri

Before this summer, I knew little about Wild Bill Hickok. Then, within just a few weeks, we visited three places within Kansas and Illinois that all shared Hickok stories—quite a coincidence. I learned several fascinating facts about him. Here are END_OF_DOCUMENT_TOKEN_TO_BE_REPLACED