In the mid-1800s Newburgh, Indiana, flourished. Steamboat traffic and coal mining were big industries. Warehouses lined Water Street. Mills and small factories contributed to the town’s success. Today, the steamboats, mills and warehouses are gone. A walking trail parallels the Ohio River, with benches on which you can sit for a while and watch barges that still ply the glistening waters. Restaurants and shops attract visitors. The atmosphere is casual, resort-like. However, the town embraces its historic roots, combining the old with the new, as we discovered during our visit to Newburgh during our road trip last fall along Indiana’s Ohio River Scenic Byway. 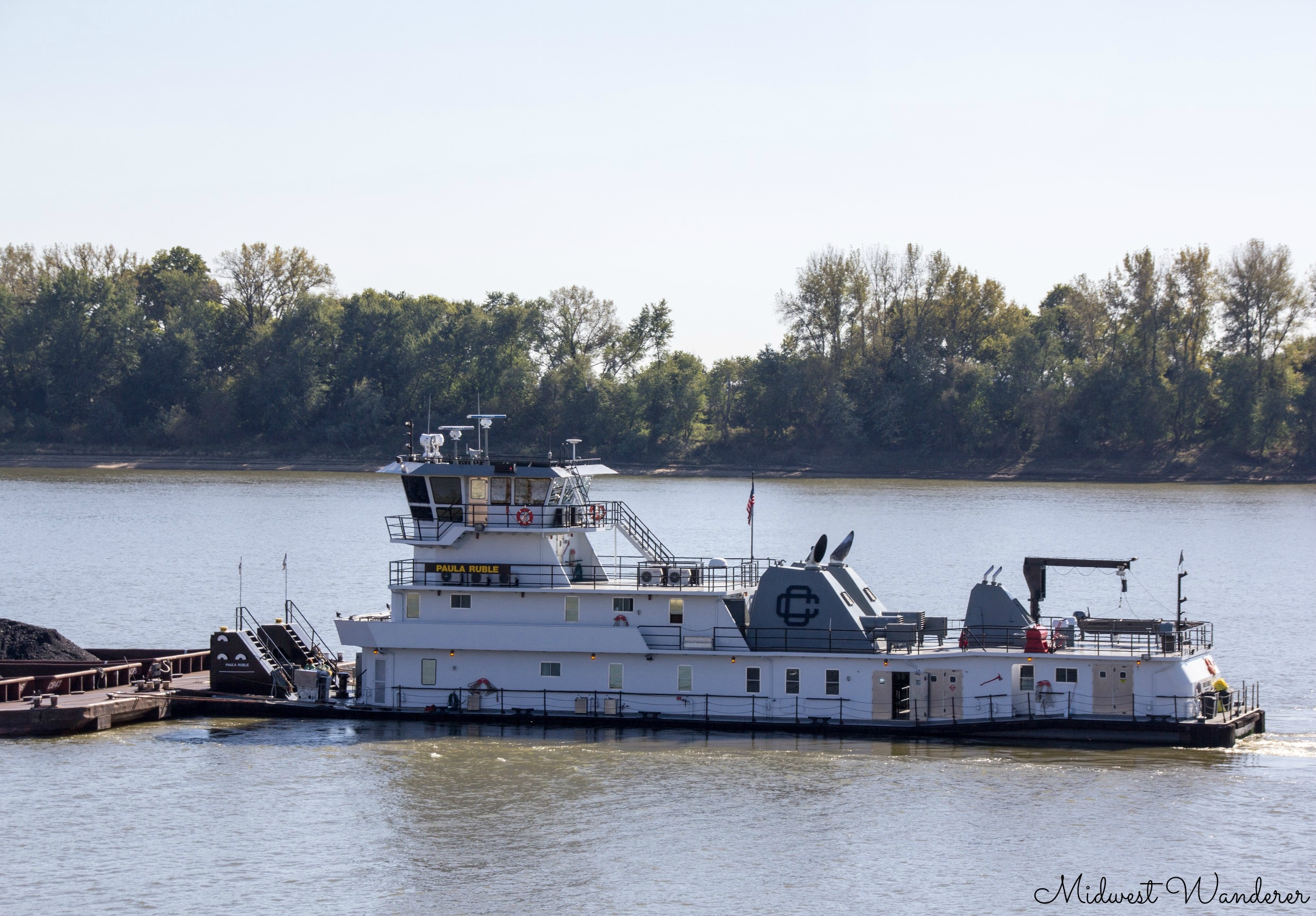 Many of the buildings erected during Newburgh’s mid-18th century boom remain, repurposed into shops, restaurants, and museums. We enjoyed reading the plaques that have been added to several of the buildings explaining their histories.

The Exchange Hotel, which was built in 1841 and which served as a hospital during the Civil War, is now Country Gentleman Antiques. 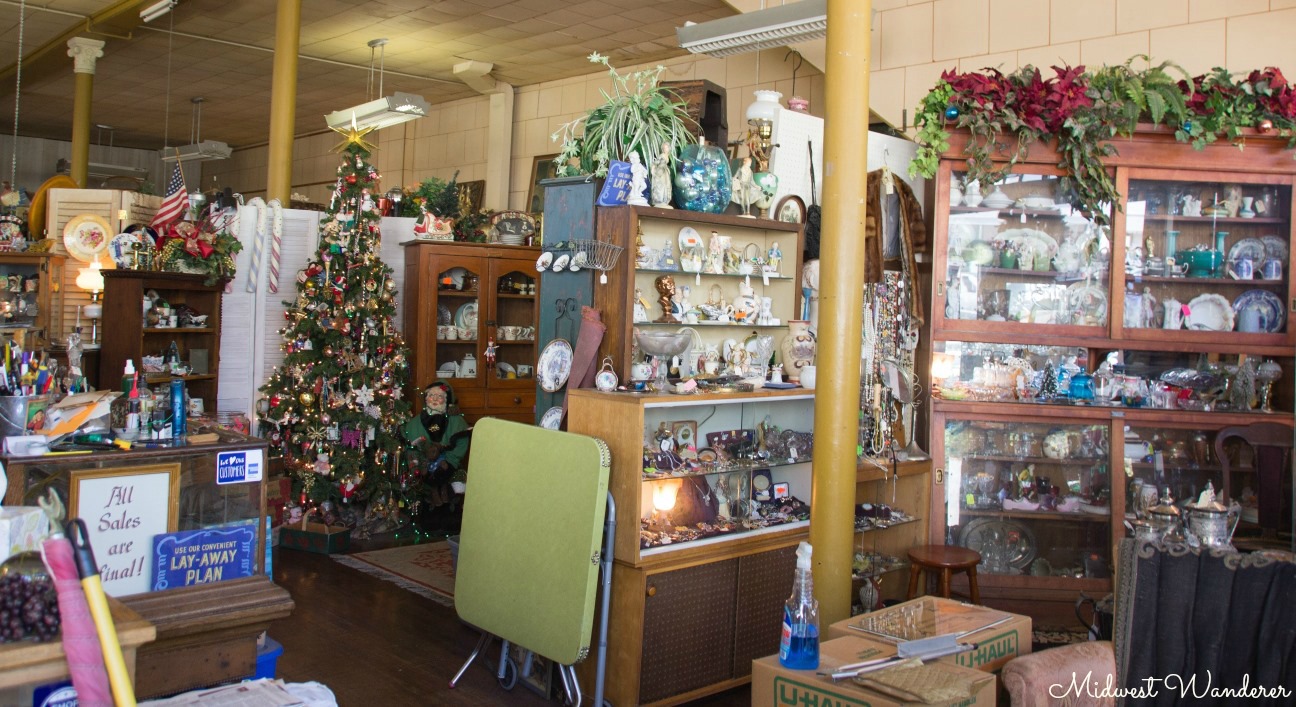 Sweet Emotions Soaptions & Potions, which sells handmade soaps and skincare products, is in the Citizens Bank building, built in 1902. The bank vault, apparently the safest vault in the Midwest when it was installed, is still in the building. 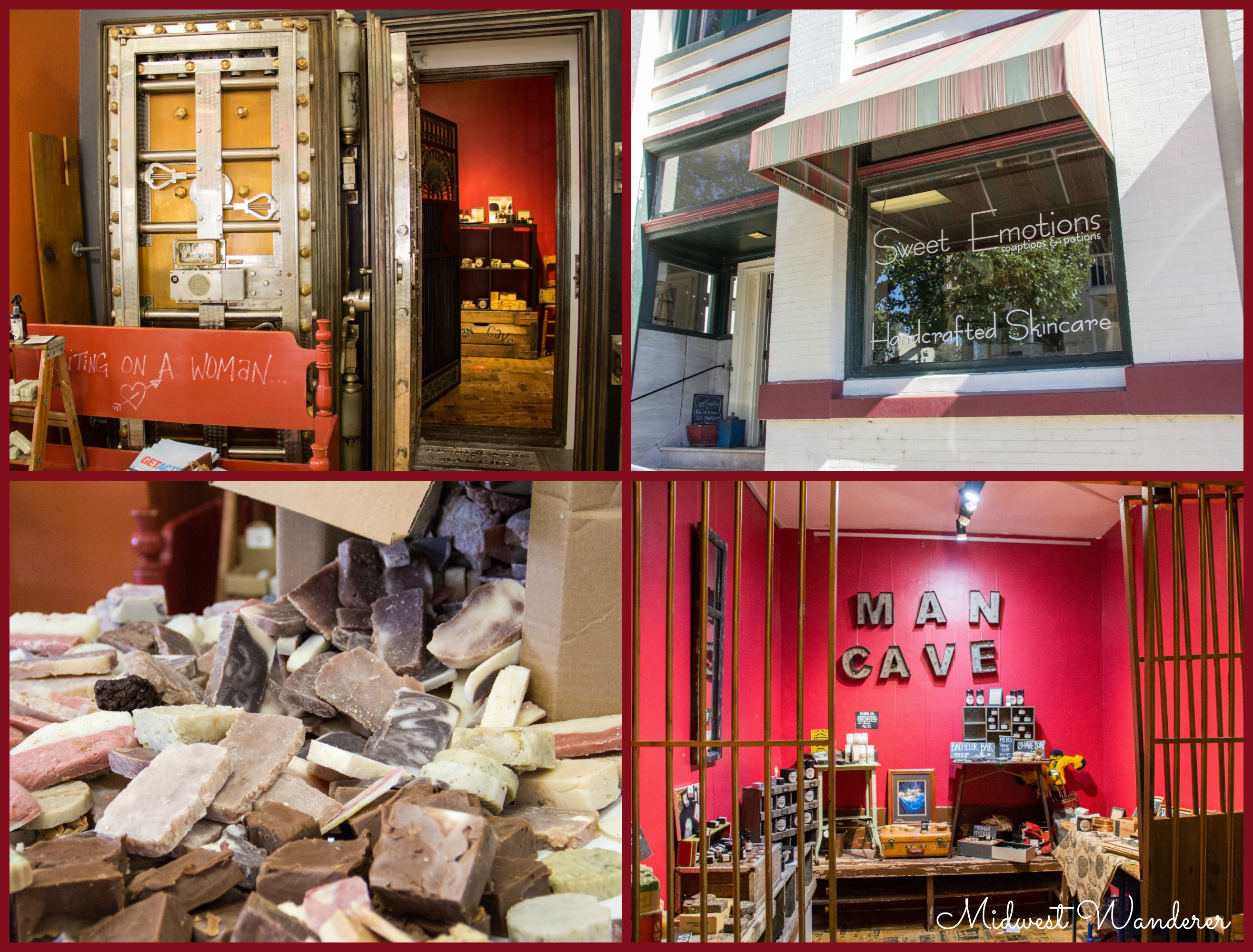 Next door to the soap shop is the Book Nook. This lower-level space is packed with used books. I could have spent hours in the Book Nook perusing books that range from recently published to some published as far back as the 1800s. 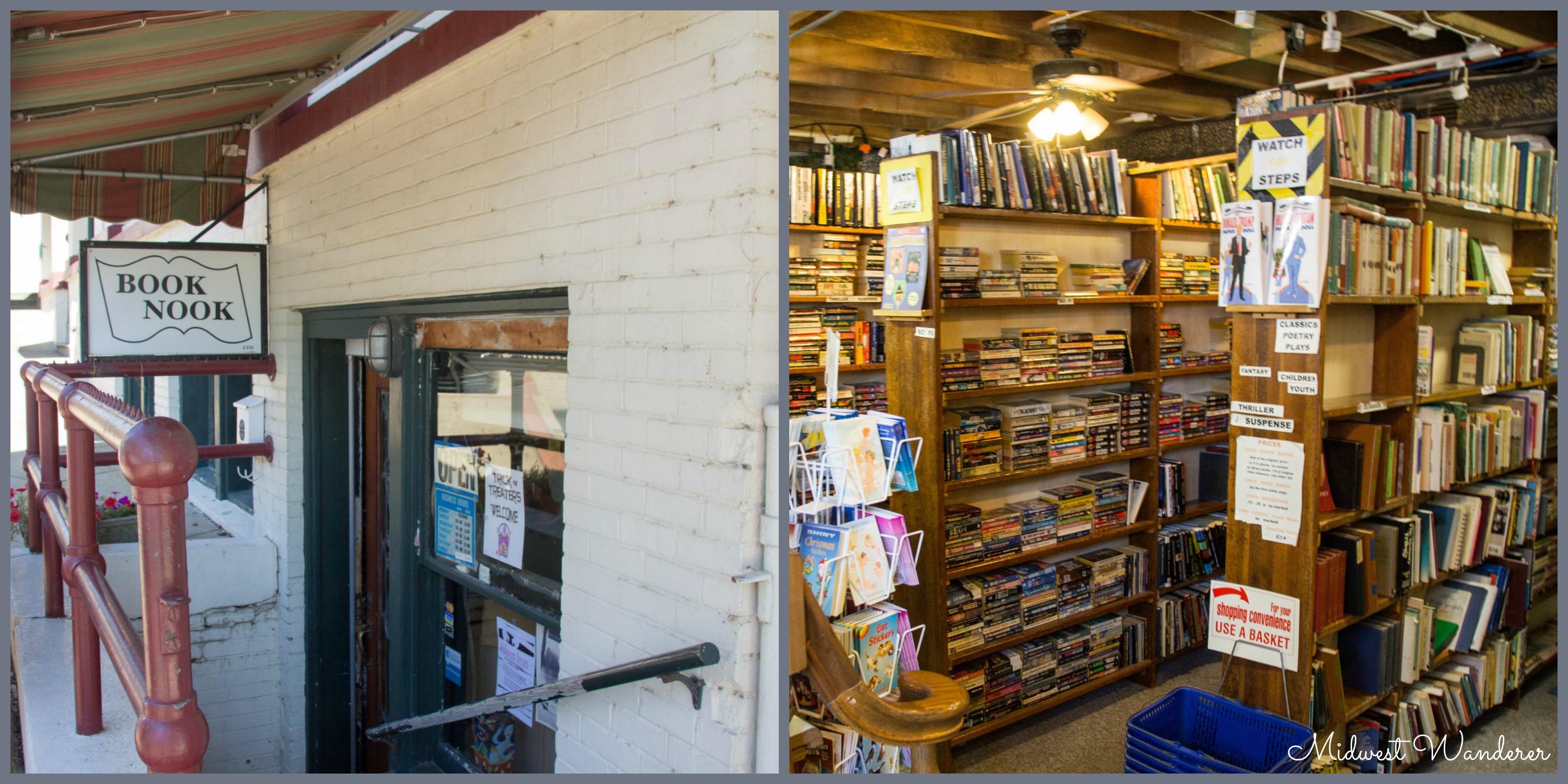 After browsing the shops, we walked over to the Newburgh Museum, where we learned more about the town’s history, from the Civil War days to Cypress Beach, the hot spot for entertainment in the early 20th century. The museum is housed in a building known as Preservation Hall. It was originally a Presbyterian church, and later, the Newburgh town hall. 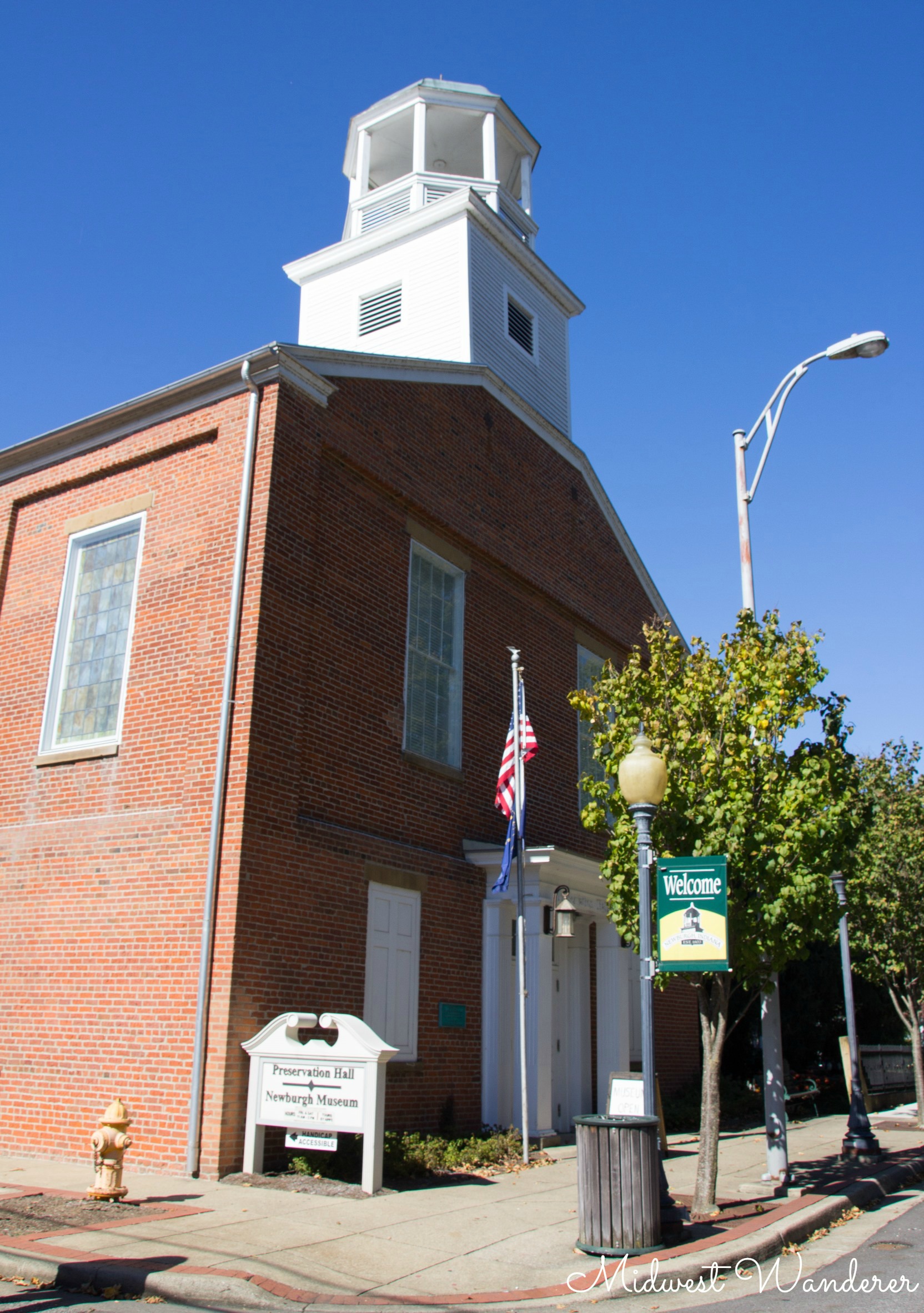 In the museum I learned the story of the capture of Newburgh during the Civil War. Newburgh was the first town north of the Mason-Dixon Line to be captured by the Confederacy. Adam Rankin Johnson, a Confederate officer wannabe, recruited a group of men under the 1862 Confederate Partisan Ranger Act. Johnson made two fake cannons out of stove pipes and wagon wheels. He stationed the “cannons” on a hill across the river in Henderson, Kentucky, where they were in plain view from Newburgh.

Johnson’s group crossed the river from Kentucky to Indiana at lunchtime, when the streets were quiet. They raided an unguarded, unlocked warehouse full of weapons. They then raided the Exchange Hotel, which was serving as a Union hospital. When confronted by Union officials, Johnson pointed out the fake cannons and told them they were surrounded. The raid lasted only a few hours, and not a drop of blood was shed. 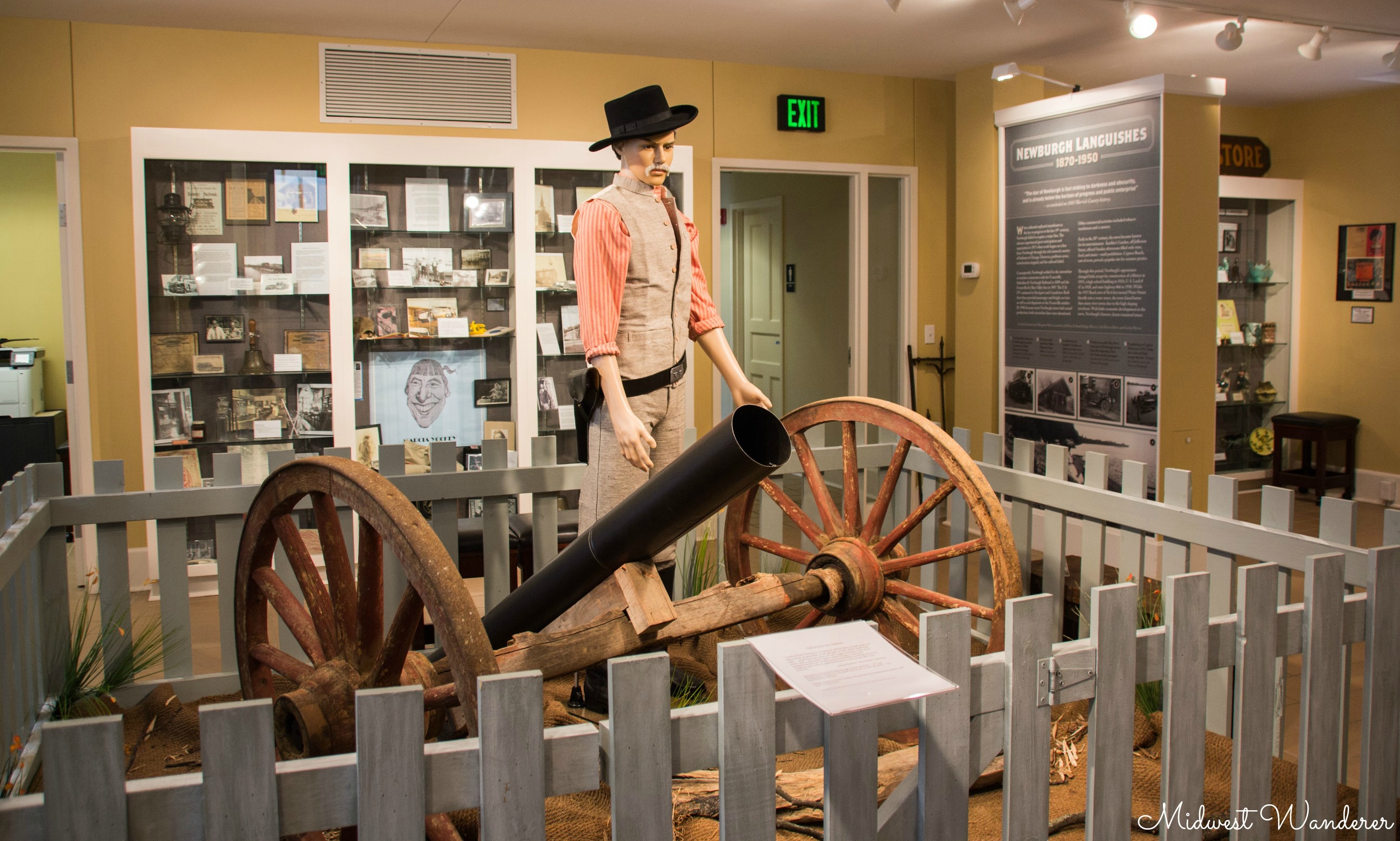 Our stay in a Lockmaster Cottage

Fast forwarding in history to the early 20th century, the Army Corps of Engineers built a series of locks and dams on the Ohio River. Construction on Lock and Dam #47 in Newburgh began on 1928. At the same time, two houses were built on a hill across the road from the river. The lockmaster and the assistant lockmaster lived in the houses. The lock and dam were moved in the 1970s, and the houses were no longer needed.

Today the lockmasters cottages are available for rent, and we stayed in one of them during our Newburgh visit. What a gorgeous view we had, particularly at sunset and again at sunrise. 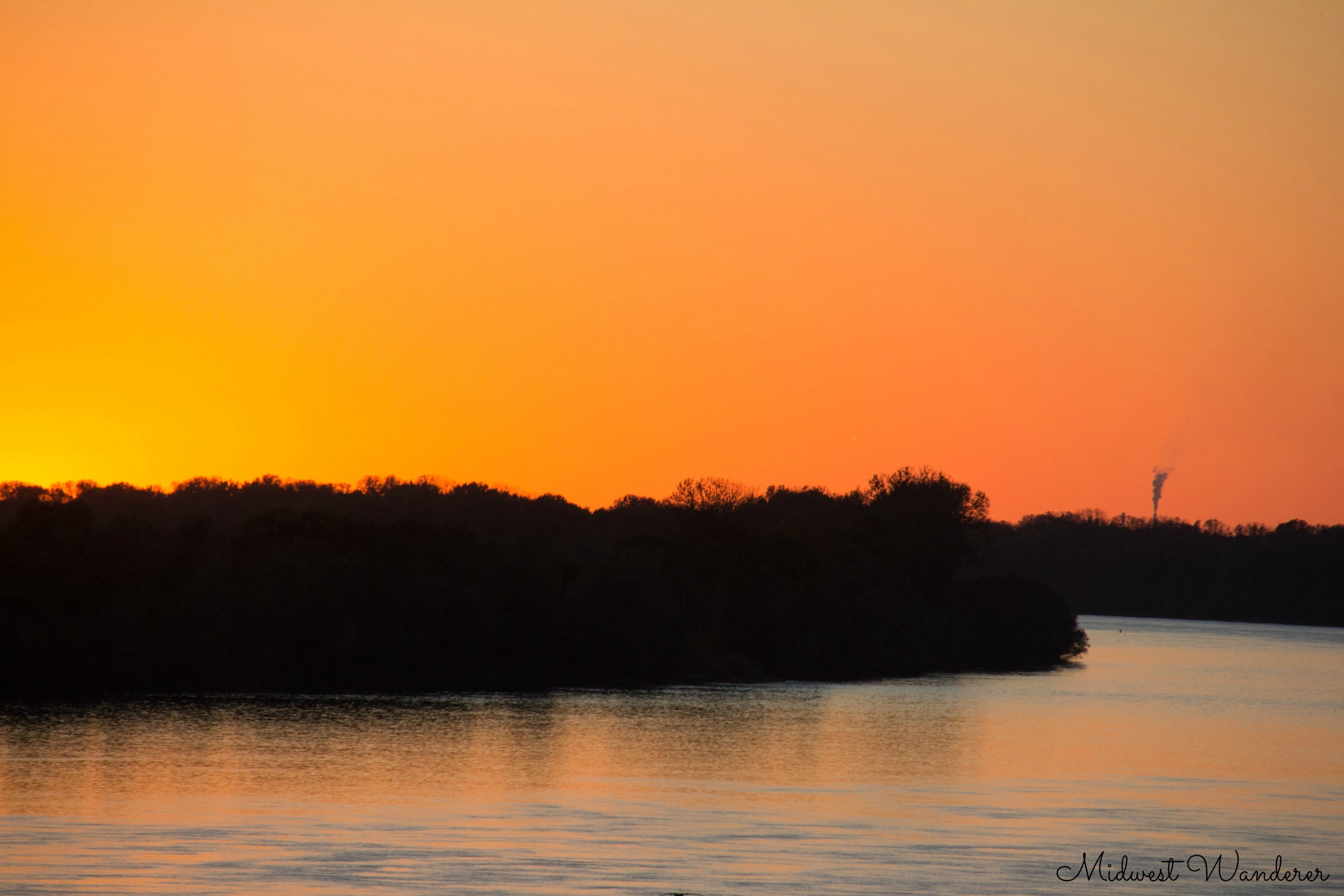 The Lockmaster Cottages are renovated, fully furnished two-story houses that sleep eight. They have two bathrooms and plenty of outdoor space. Since we were on our whirlwind road trip, we spent very little time in the cottage, but it would be an ideal weekend getaway for a family, a group of girlfriends, or several couples. 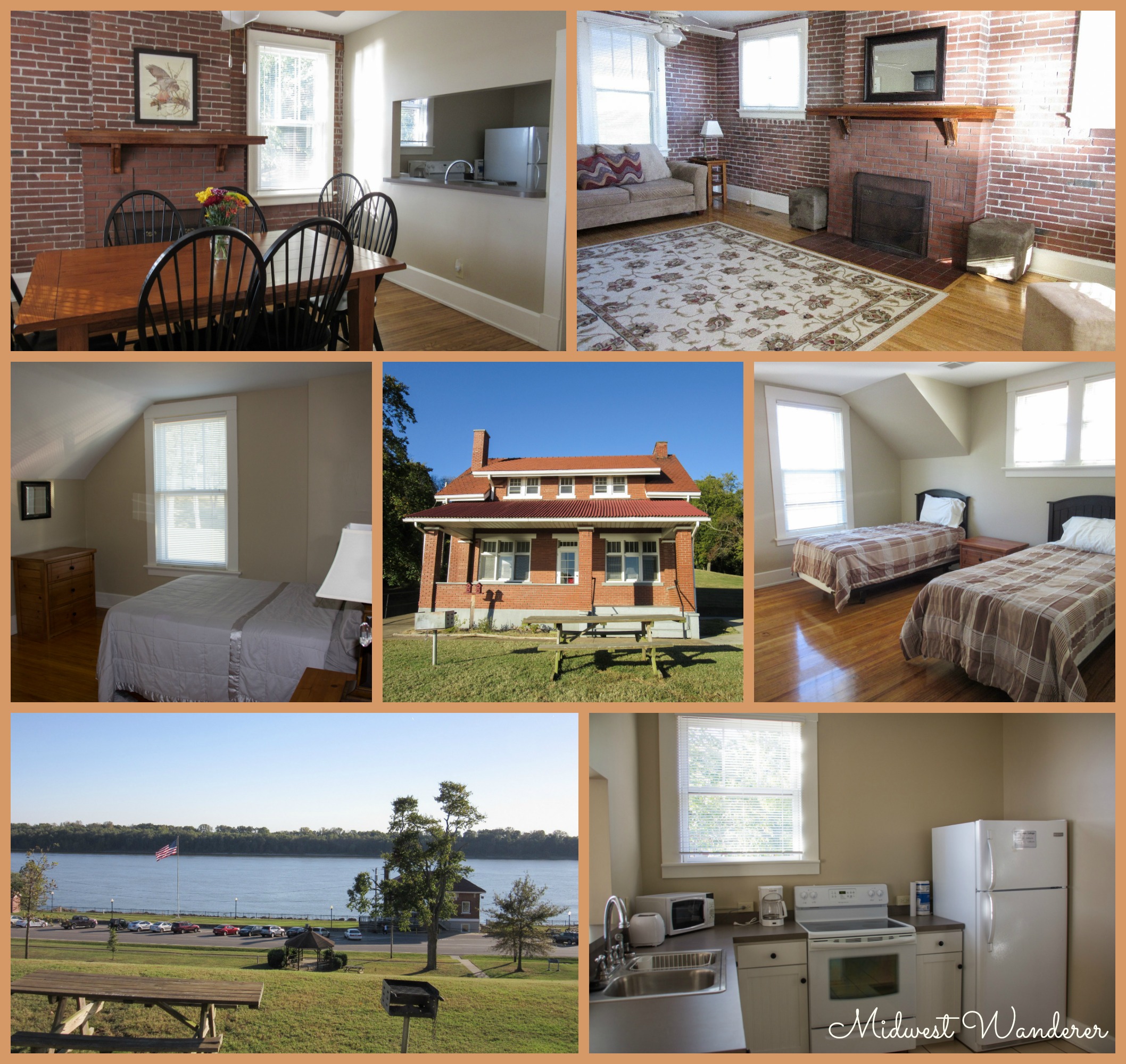 Where to eat in Newburgh

Newburgh offers several casual dining options. We ate lunch at Café Arazu. We dined indoors, but the outdoor garden space overlooking the river is lovely on a nice day, as well. Café Aruzu offers a blend of Persian and American dishes. I chose the Polynesian Pork Sandwich, served with fries. Other options include dishes like Chicken Shwarma, Moroccan Red Lentil Soup, and a burger. 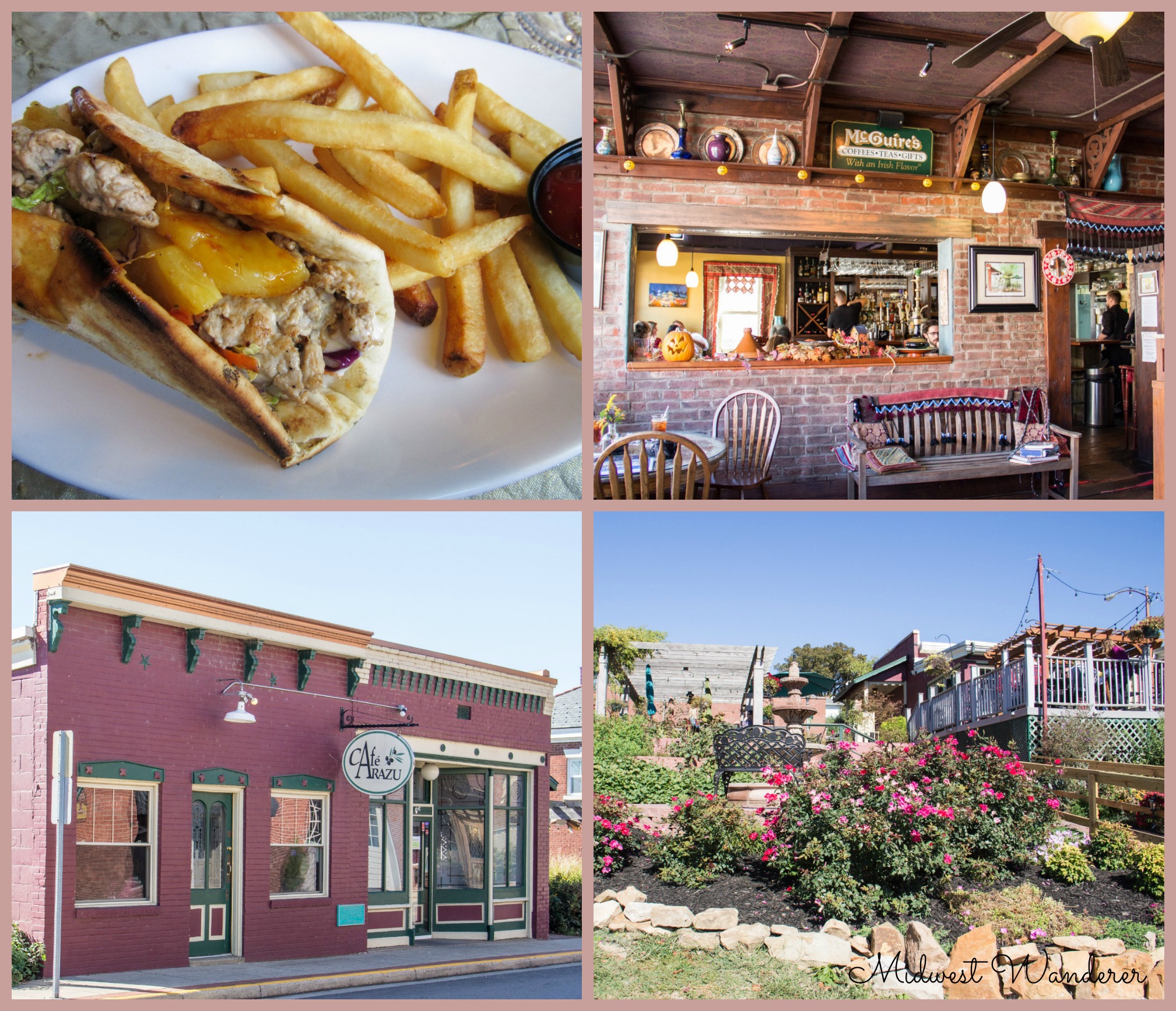 At dinner, we couldn’t resist taking advantage of the outdoor seating at the Edgewater Grill, despite the late October evening chill. The river view from the dining patio was stunning. The Edgewater Grill offers seafood, steaks, and brick oven pizza, but we both chose lighter fare. 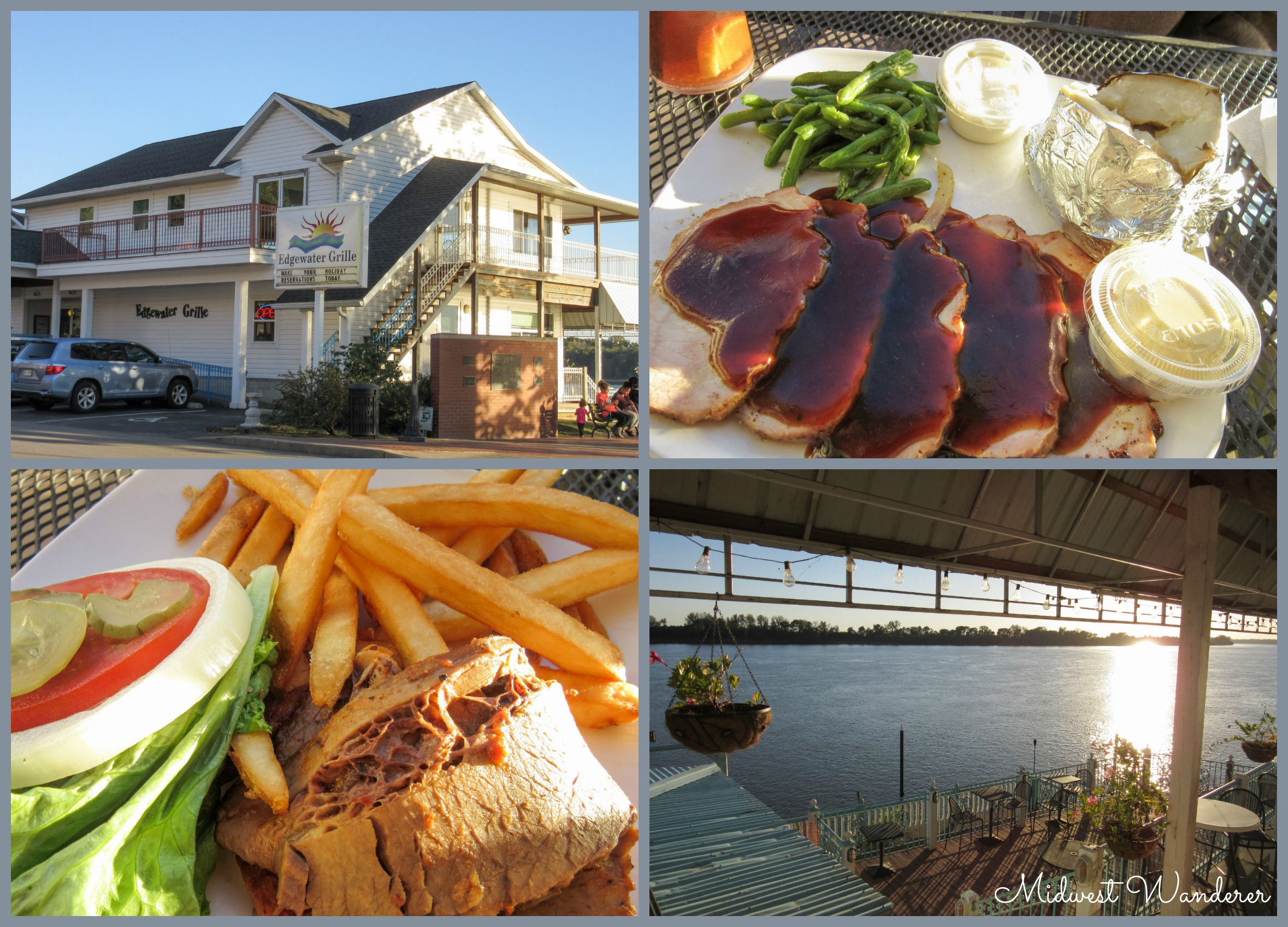 If you visit Historic Newburgh

Newburgh is located in southern Indiana along the Ohio River Scenic Byway, approximately 11 miles east of Evansville. For further details on area attractions and events, visit the Historic Newburgh website. 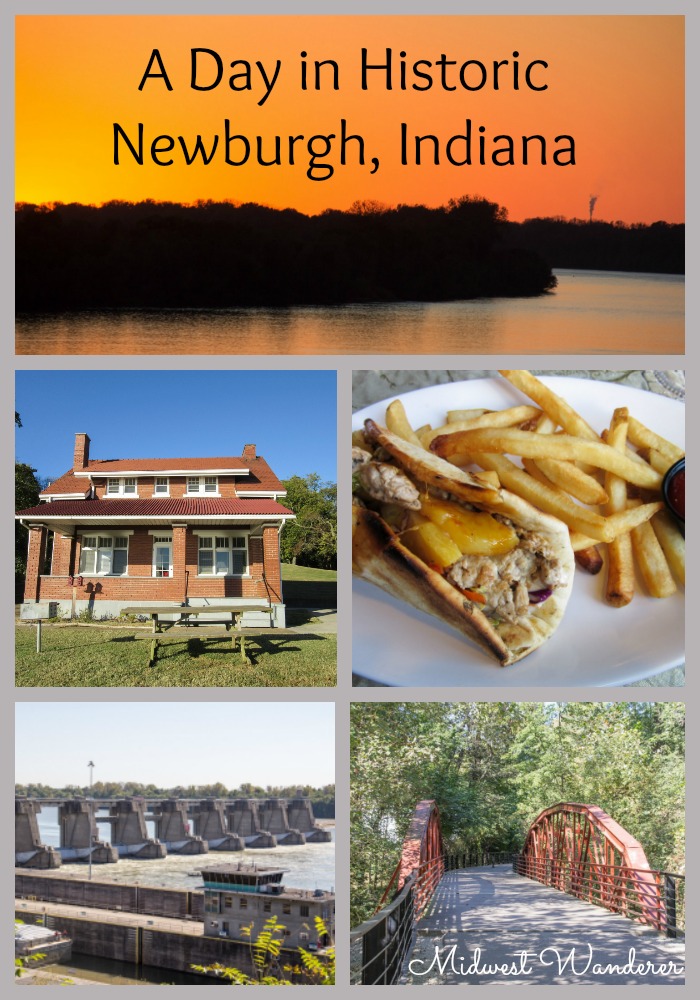 Disclosures: Historic Newburgh, Inc. hosted my visit to the area. However, any opinions expressed in this article are my own.

Thank you for reading Midwest Wanderer. Don’t miss a post. Enter your e-mail address below and click Subscribe, and I’ll notify you whenever I publish another post. Subscription is FREE. After subscribing, be sure to click the link when you get the e-mail asking you to confirm.   – Connie

Howard Steamboat Museum in Jeffersonville, Indiana, pays tribute to the Howard family and their steamboat building company. The tour combines a history of the ornate Edmonds and Laura Howard mansion and the shipyard located across the street, which the Howard END_OF_DOCUMENT_TOKEN_TO_BE_REPLACED