In our travels we often tour historic homes that were originally owned by prominent local residents. Those homes are usually furnished with very few of the original owner’s belongings. Instead, they’re filled mostly with period furniture obtained elsewhere. Not so with the Pettengill-Morron House in Peoria, Illinois. The last Pettengill-Morron House owner, Jean Morron, left the home to the Peoria Historical Society with all of her possessions intact. Entering the home, you feel like you’re stepping into somebody’s current residence. 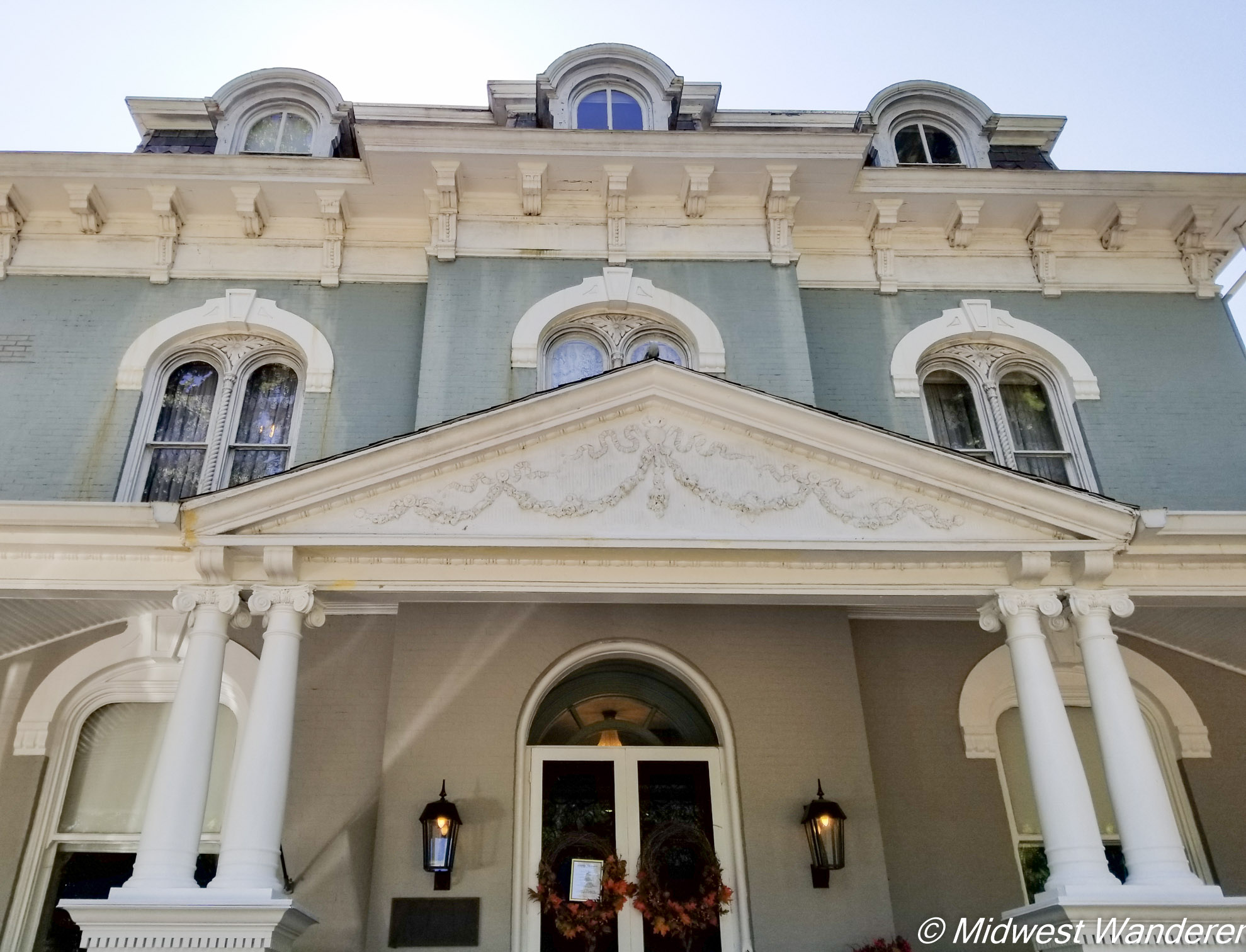 Moses Pettengill, who was in the mercantile business, had the home built in 1868. That’s where the home’s name comes from, the original owner (Pettengill) and the last owner (Morron). One other owner of the home is mentioned during the tour, and that is the John Boyd Stone family.

The Stones bought the house in the mid-1940s and made many improvements to the home, which had fallen into disrepair. Repairs included covering the cracked plaster walls with canvas, installing a new kitchen, and adding bathrooms and a lot of built-ins.

One of the Stones’ daughters, Cynthia, married Jack Lemmon in the home’s parlor. The couple later divorced, and Cynthia later married Cliff Robertson. That marriage also ended in divorce.

In 1953, Jean Morron, who came from a wealthy family but never married, bought the house. She had been displaced from her family’s home when it was torn down to make way for Interstate 74. Morron lived at the Pettengill-Morron House until she passed away in 1966 at age 86.

Mary Hamm, Director of the home, gave us a fabulous tour. Having been associated with the home for over 25 years, Mary is extremely knowledgeable in the home’s history and in Jean Morron’s life. There were so many interesting things displayed, many with fascinating anecdotes. Here are some of the items and the stories that go along with them:

Note the dainty Victorian furniture at the far end of the parlor. That furniture belonged to Jean Morron’s grandparents and then to her parents. Ms. Morron’s brother was a large man, and she was afraid the furniture wouldn’t hold up under his weight. She had the sturdy sofa, shown in the foreground, made especially for when he visited. 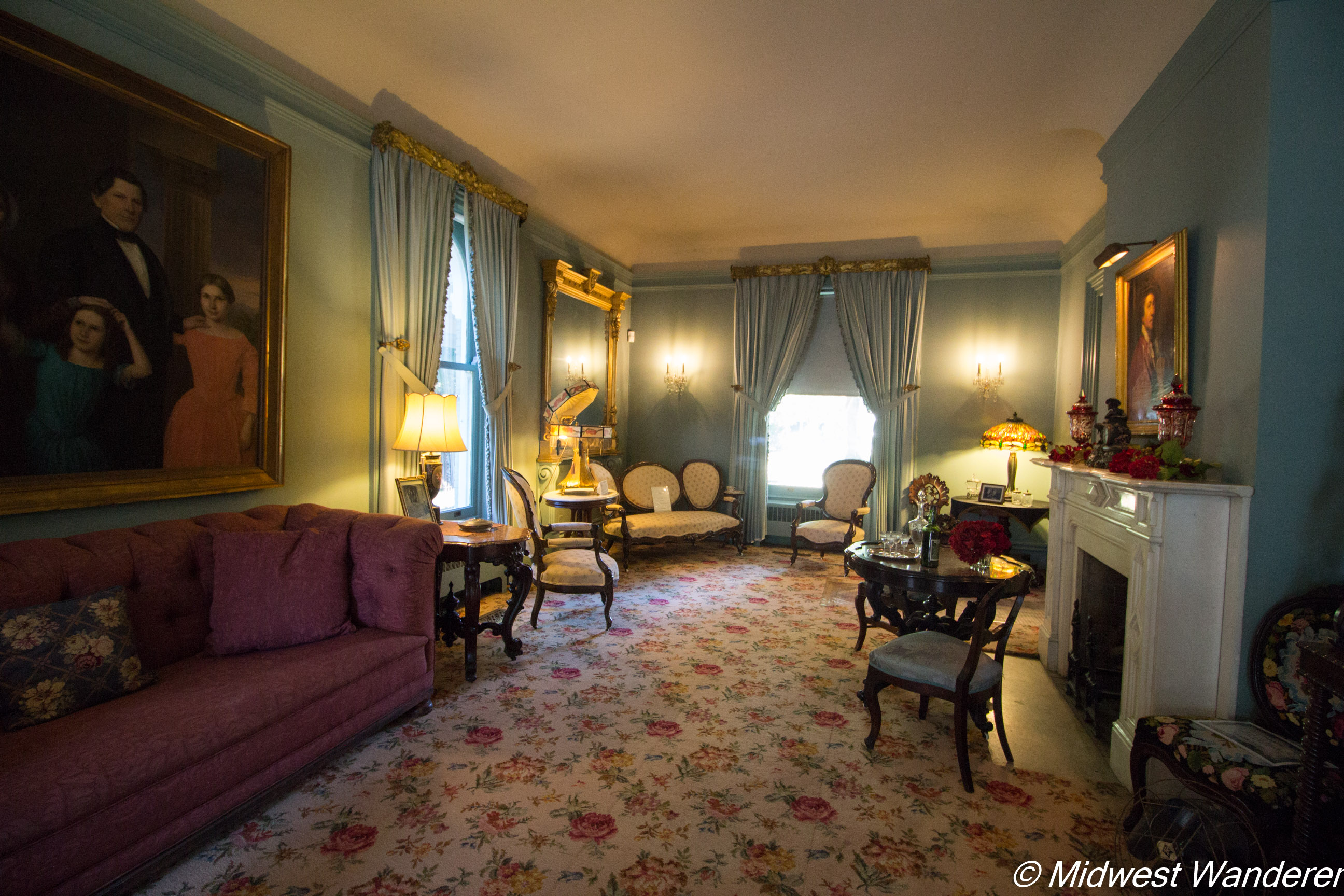 The coffin-style piano is not only shaped like a coffin, but during a wake, they would close the piano and set the coffin on top of it. 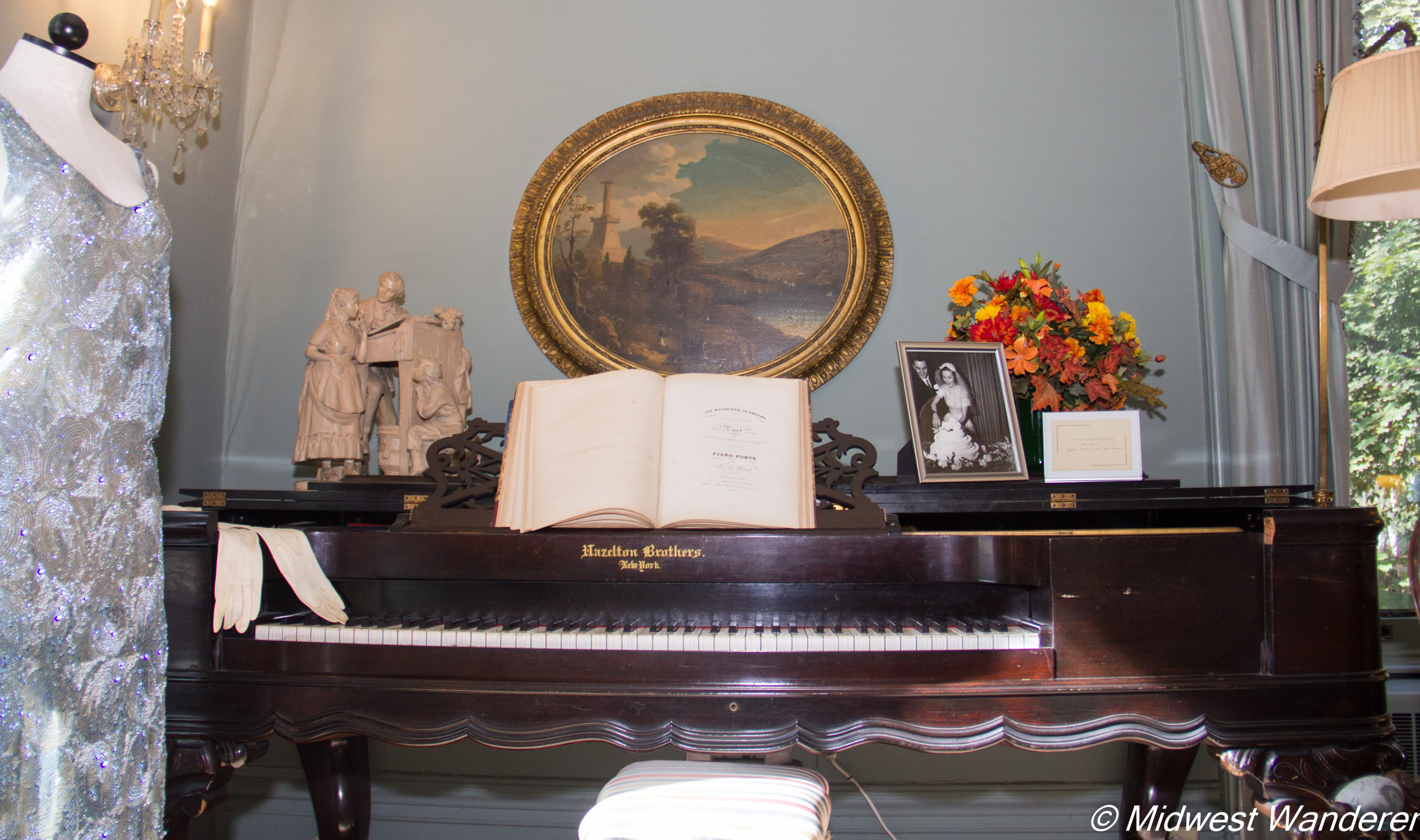 Ms. Morron hated this beautiful Tiffany lamp and stored it in the basement. 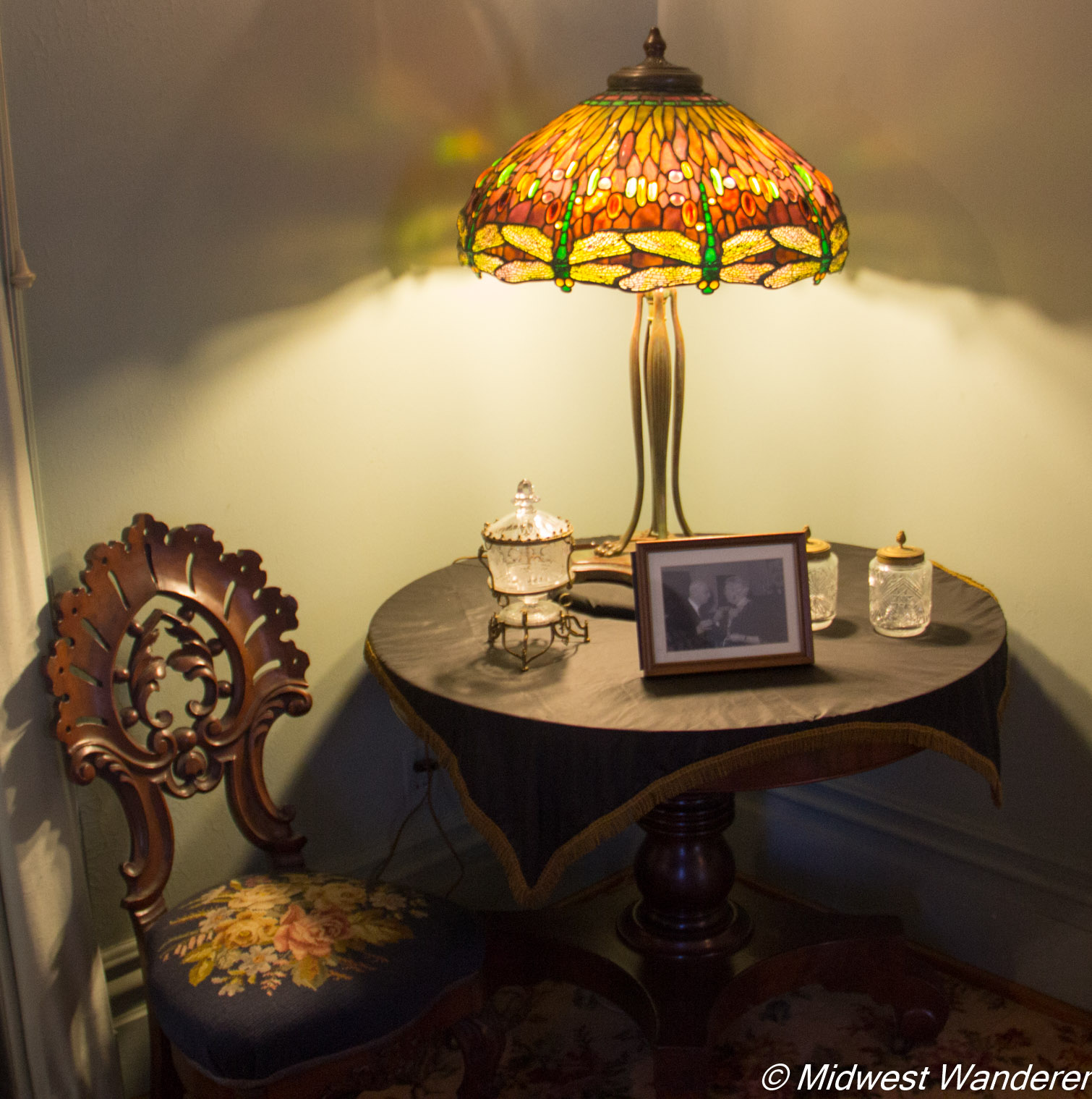 This chair apparently once belonged to Abraham Lincoln. Many original furnishings from Lincoln’s home in Springfield had been destroyed in a fire. Ms. Morron donated several items to the Lincoln home restoration, including a slant-top desk, a parian bust, and a pair of decanters. In appreciation, she was given the chair.

Also note the design in the hardwood floor underneath the chair. 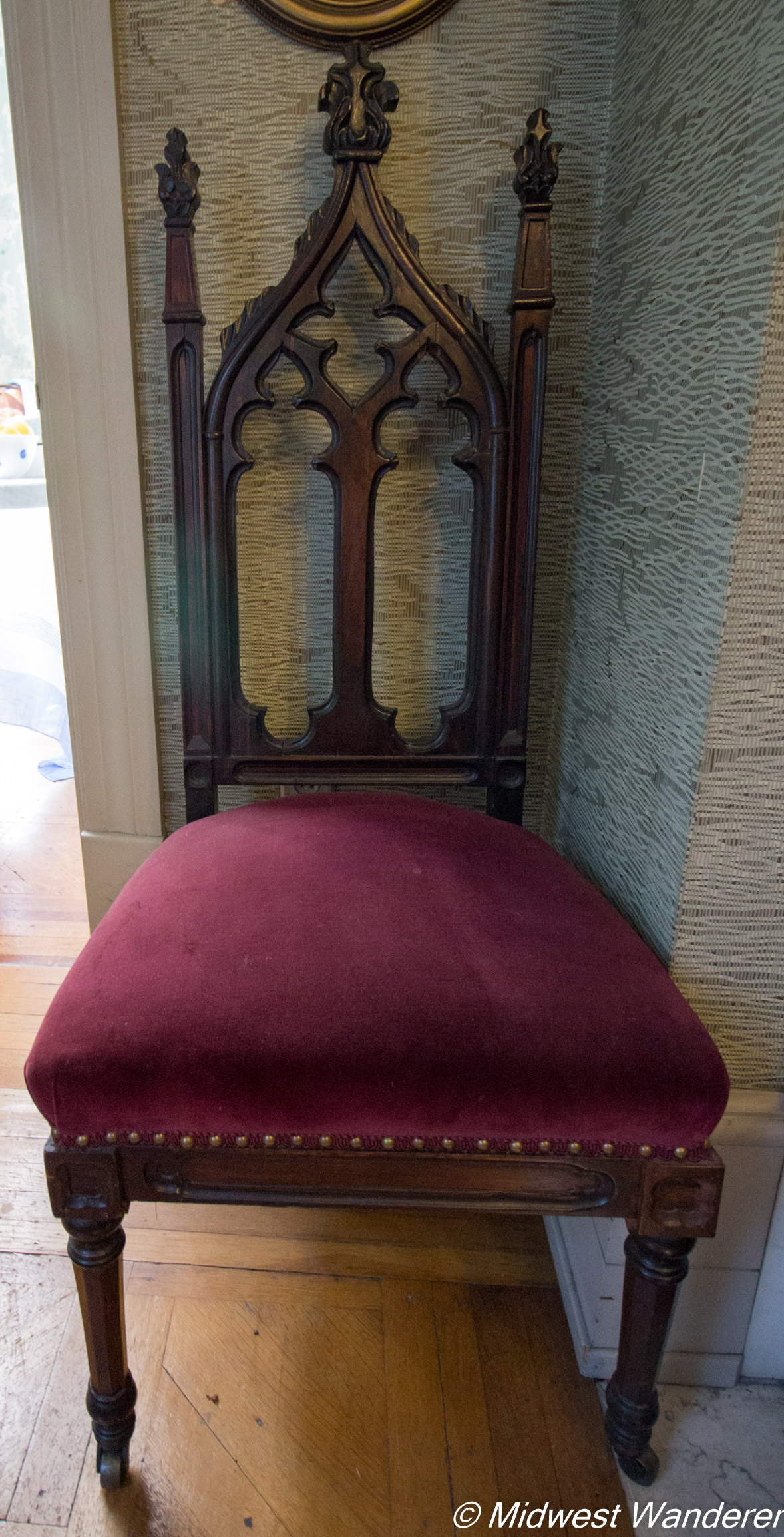 Ms. Morron removed the cherry paneling from the library. She used the room as a TV room and thought the paneling made the room too dark. Fortunately, she didn’t discard the paneling. Instead, she stored it in the basement. 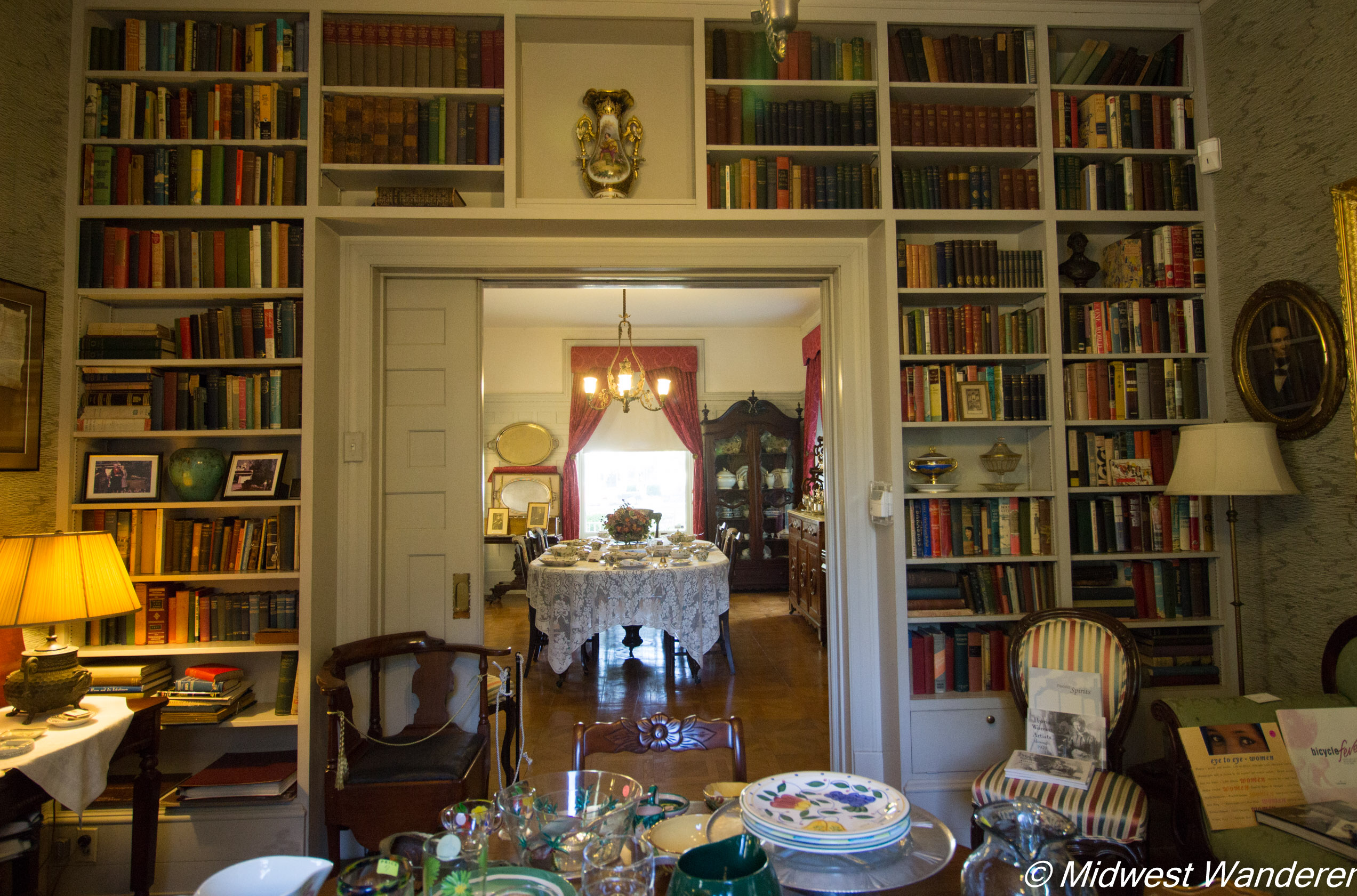 Moving to the dining room, we admired Jean’s beautiful collection of china and silver. 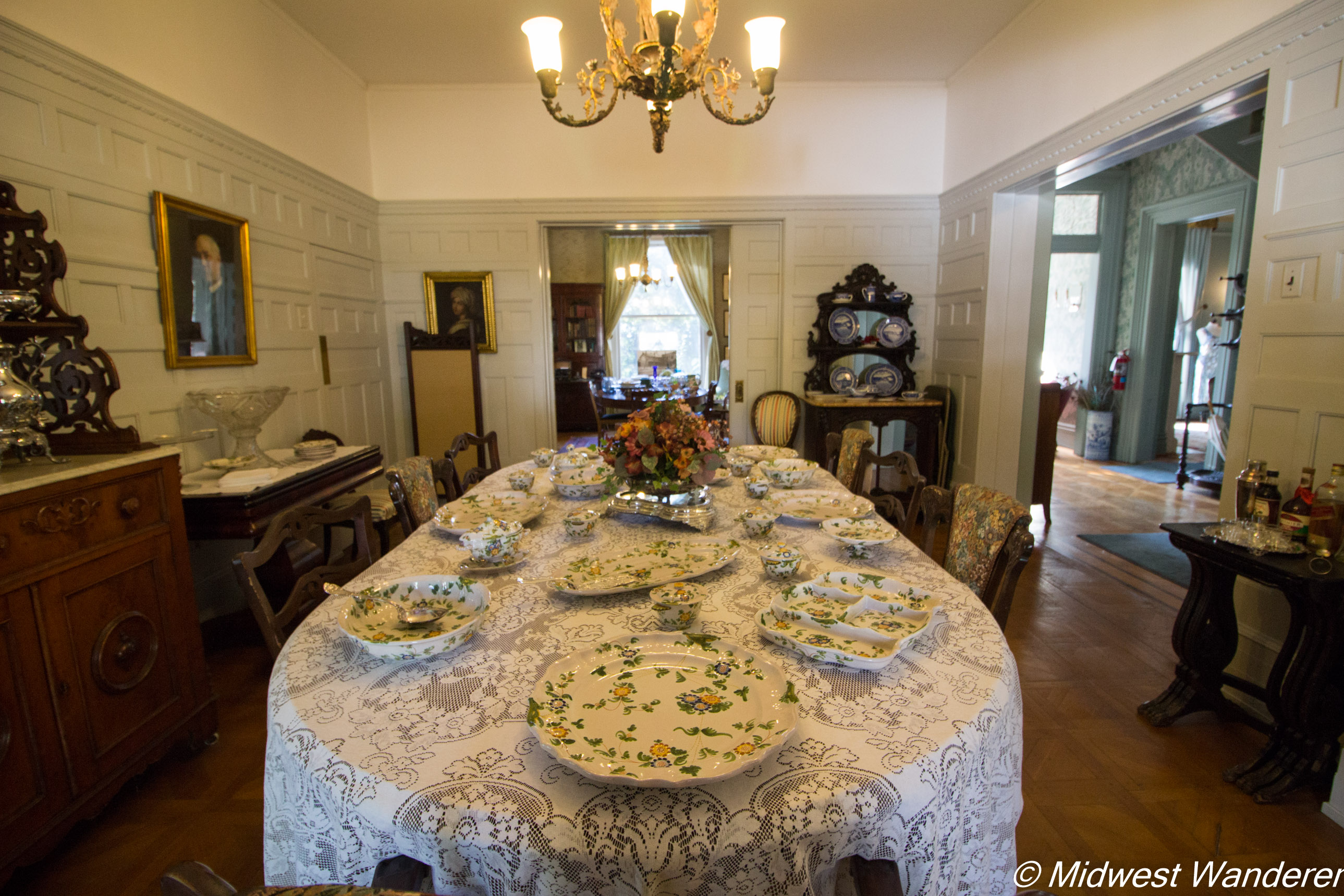 This china, which belonged to Ms. Morron’s brother, John Reynolds Morron, commemorates the 100th anniversary of the B&O railroad. John was Director of the rail line, and he would take the china with him when he traveled in his Pullman car. 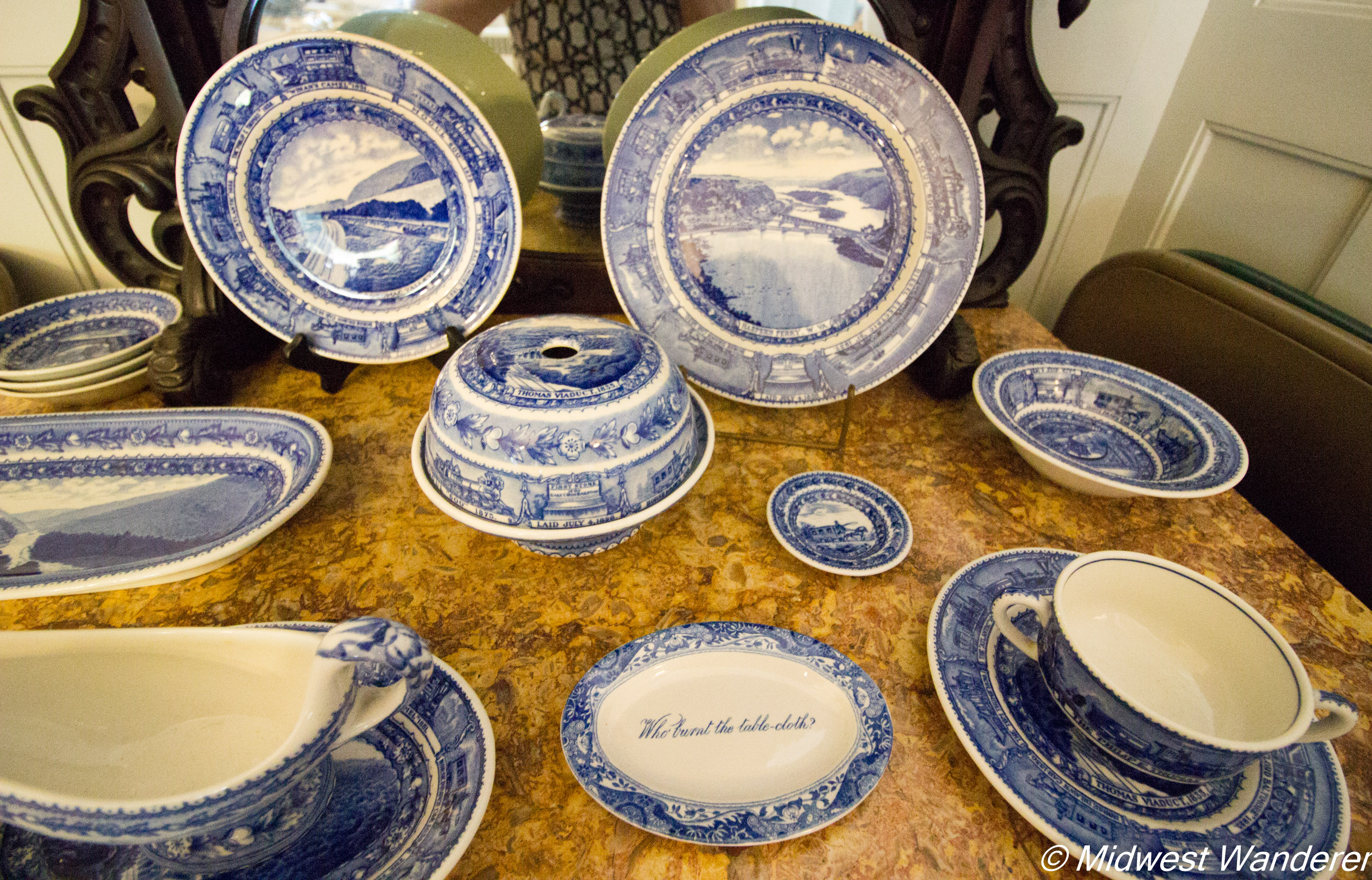 This sideboard includes a petticoat mirror. Women could stand in front of it to see if their petticoat showed. 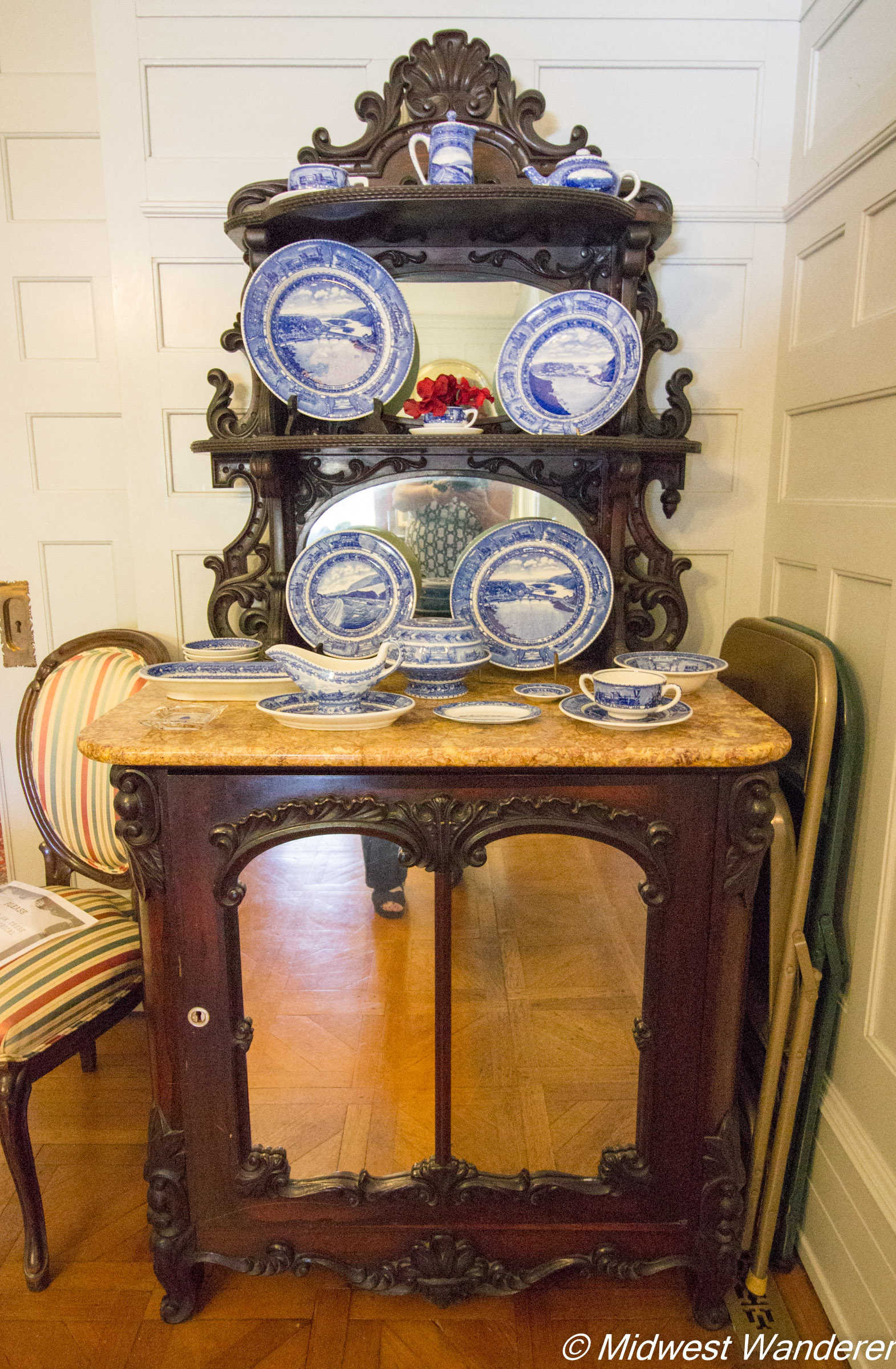 After we finished exploring the lower level, we headed upstairs to the bedrooms.

An avid traveler, Ms. Morron owned quite a collection of Louis Vuitton trunks. She especially enjoyed traveling to Paris, where a dear friend lived. A handwritten note that the home’s staff found was Ms. Morron’s list of what she wanted to buy in Paris. The list included gloves in “size 7, very reasonable.” I got a chuckle out of that, considering her wealth and all of her valuable possessions.

Ms. Morron’s travels actually began years before when she traveled the world with her parents. She had been a geometry teacher at Peoria High School after graduating from Smith College, until her father told her that somebody else could use the money and the job. He encouraged her to retire and travel the world. 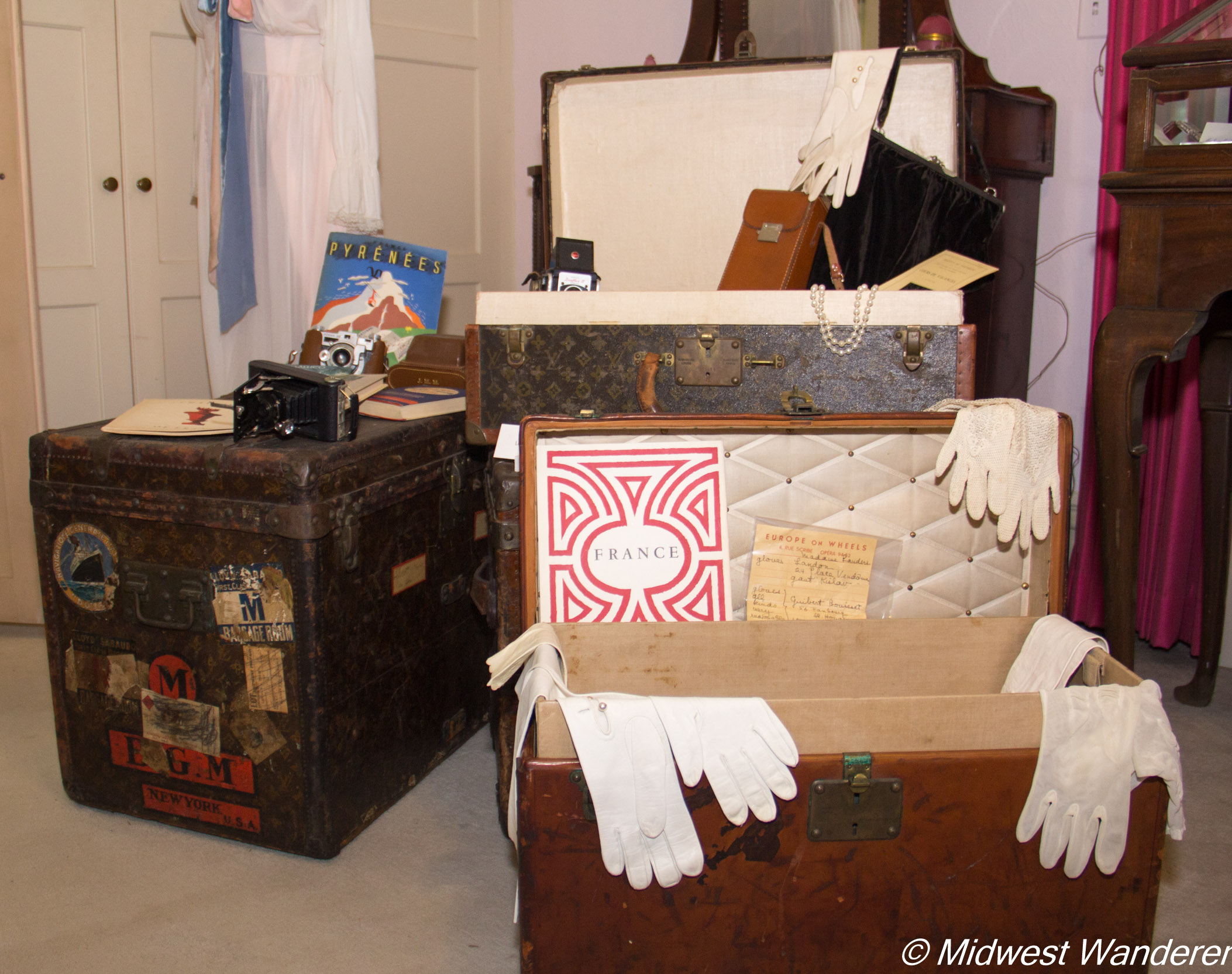 The bedroom that had belonged to Cynthia Stone includes this built-in Hollywood-style makeup mirror. 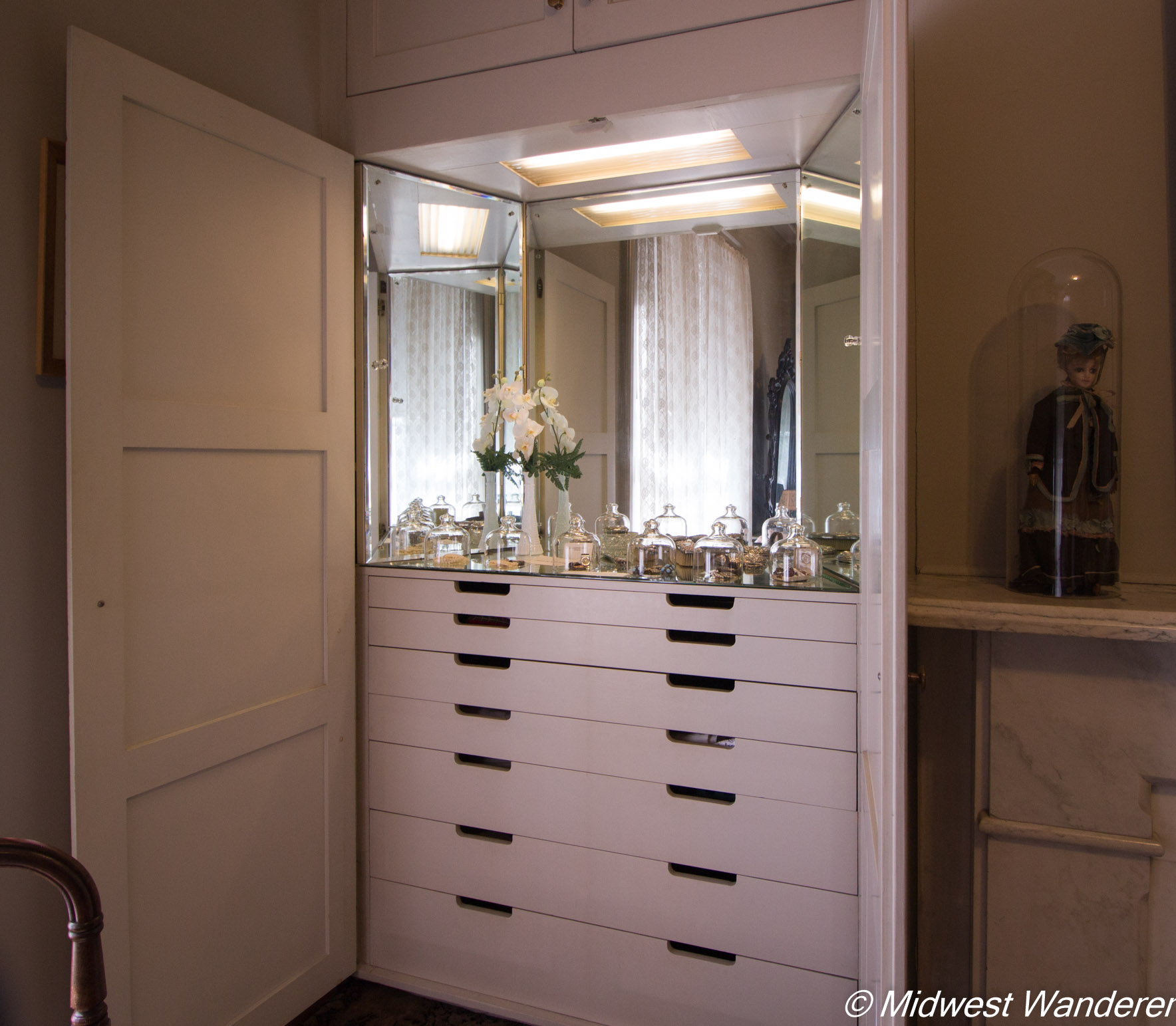 This desk was converted from a Melodeon, a small piano-type instrument. Converting Melodeons into desks was common practice. 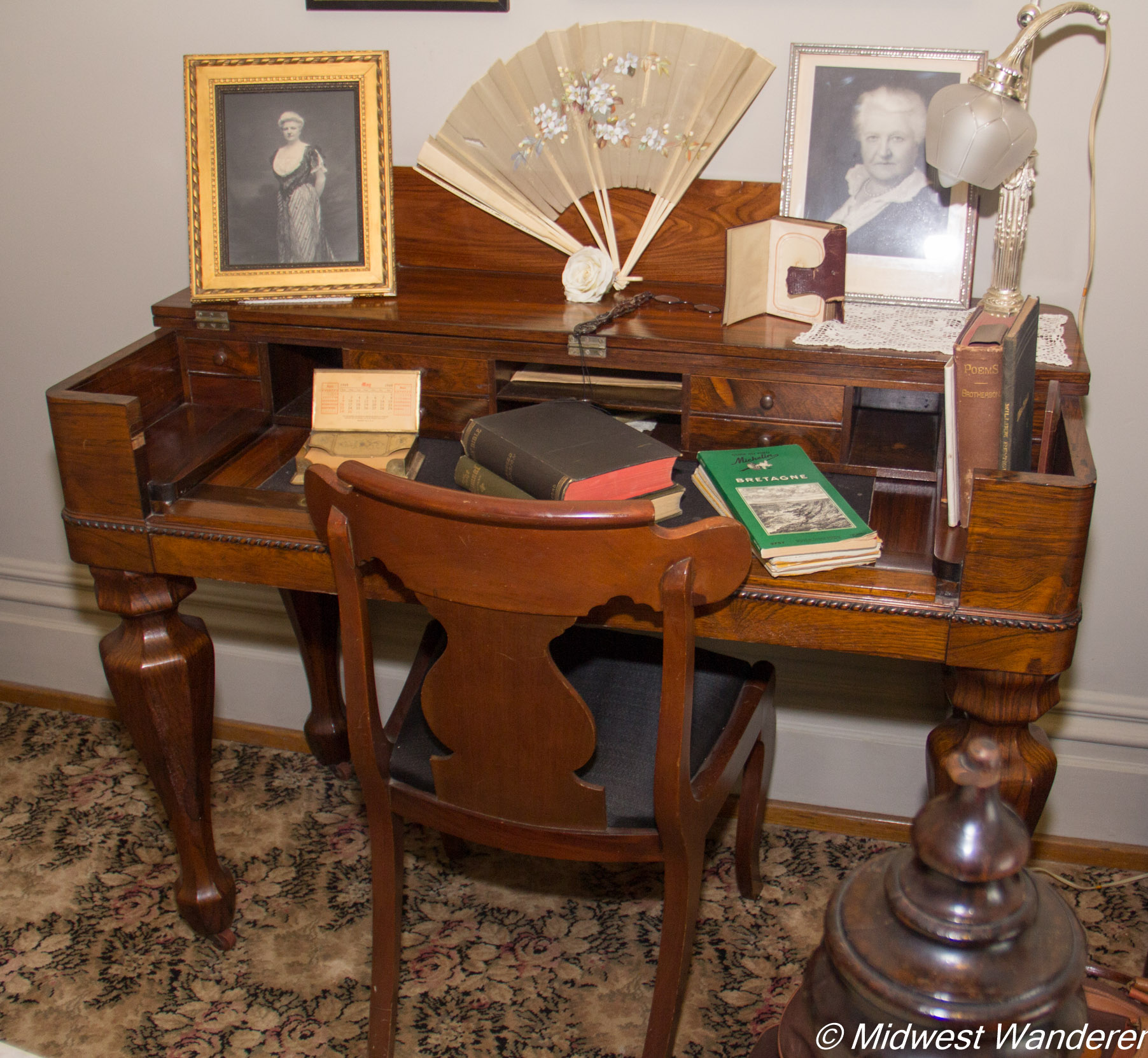 These wedding gowns were worn by Elizabeth Reynolds, Jean’s mother, and Libby Hancock, Jean’s cousin who was raised by the family. 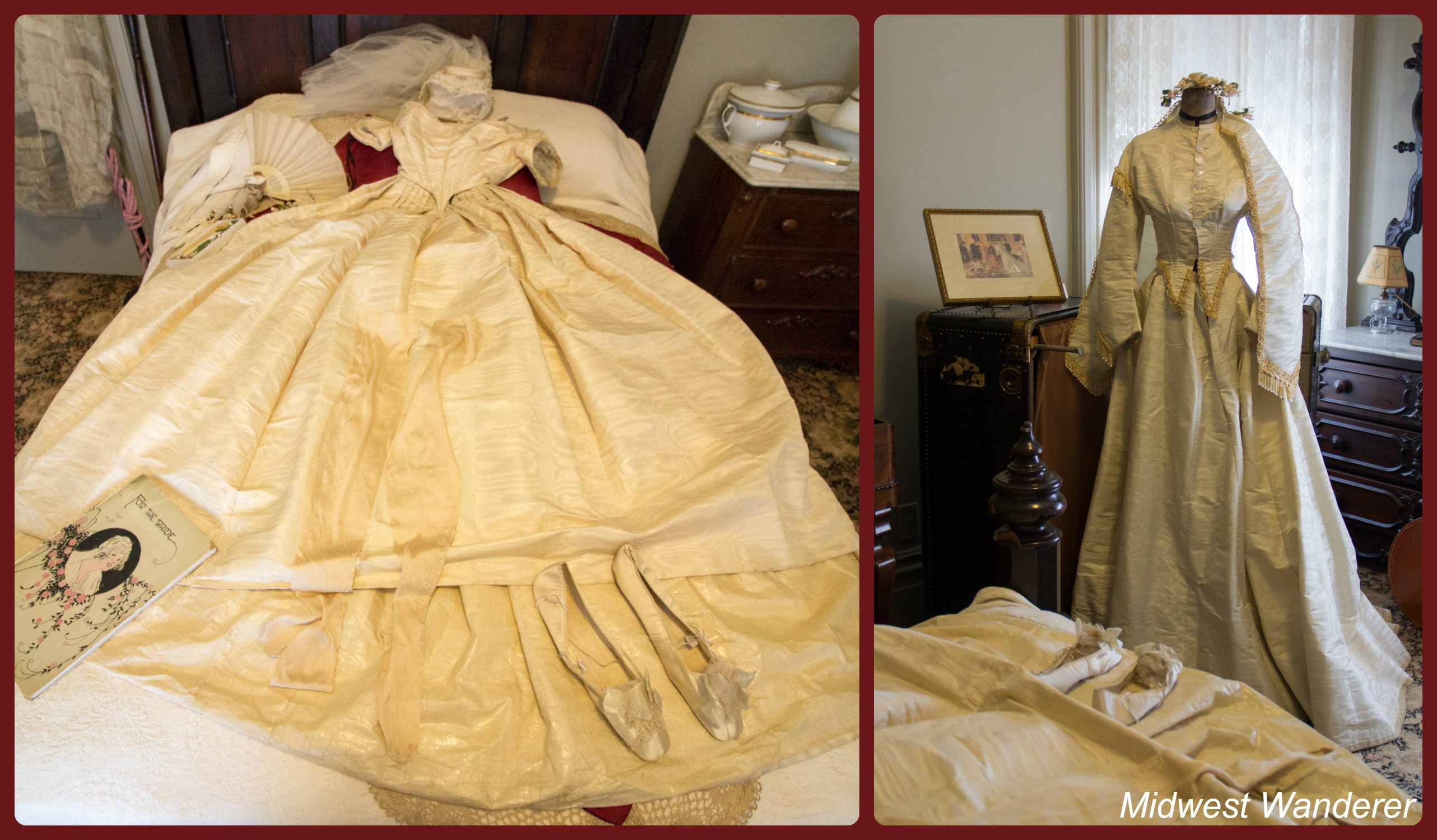 After we saw the family’s bedrooms we toured the servants’ quarters. Since Ms. Morron had kept all of her belongings from her college days, the home’s staff decorated one of the rooms as a dorm room, displaying some of the Smith College memorabilia. 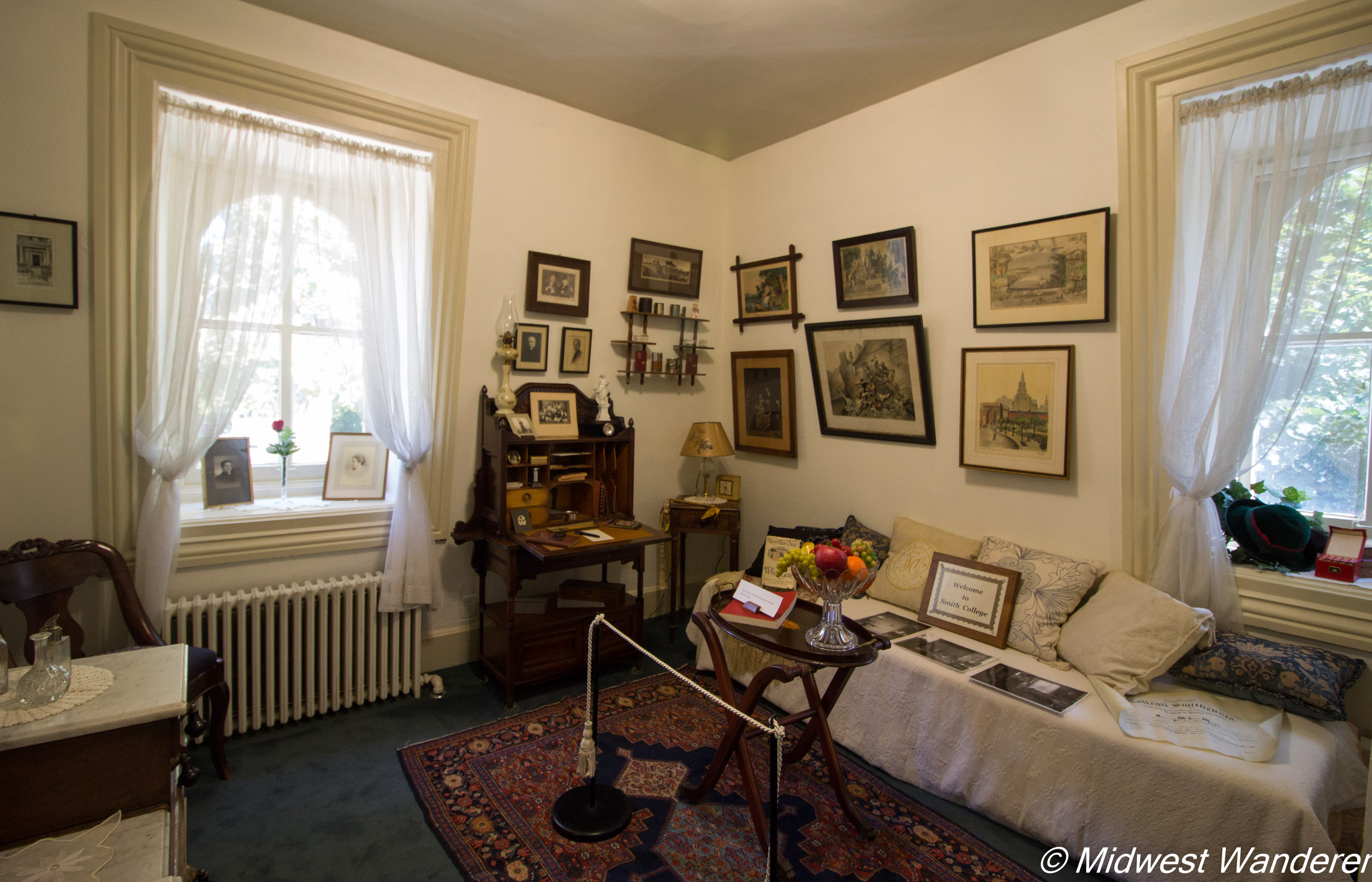 We finished our tour in the back garden. The garden is available for weddings and other events. 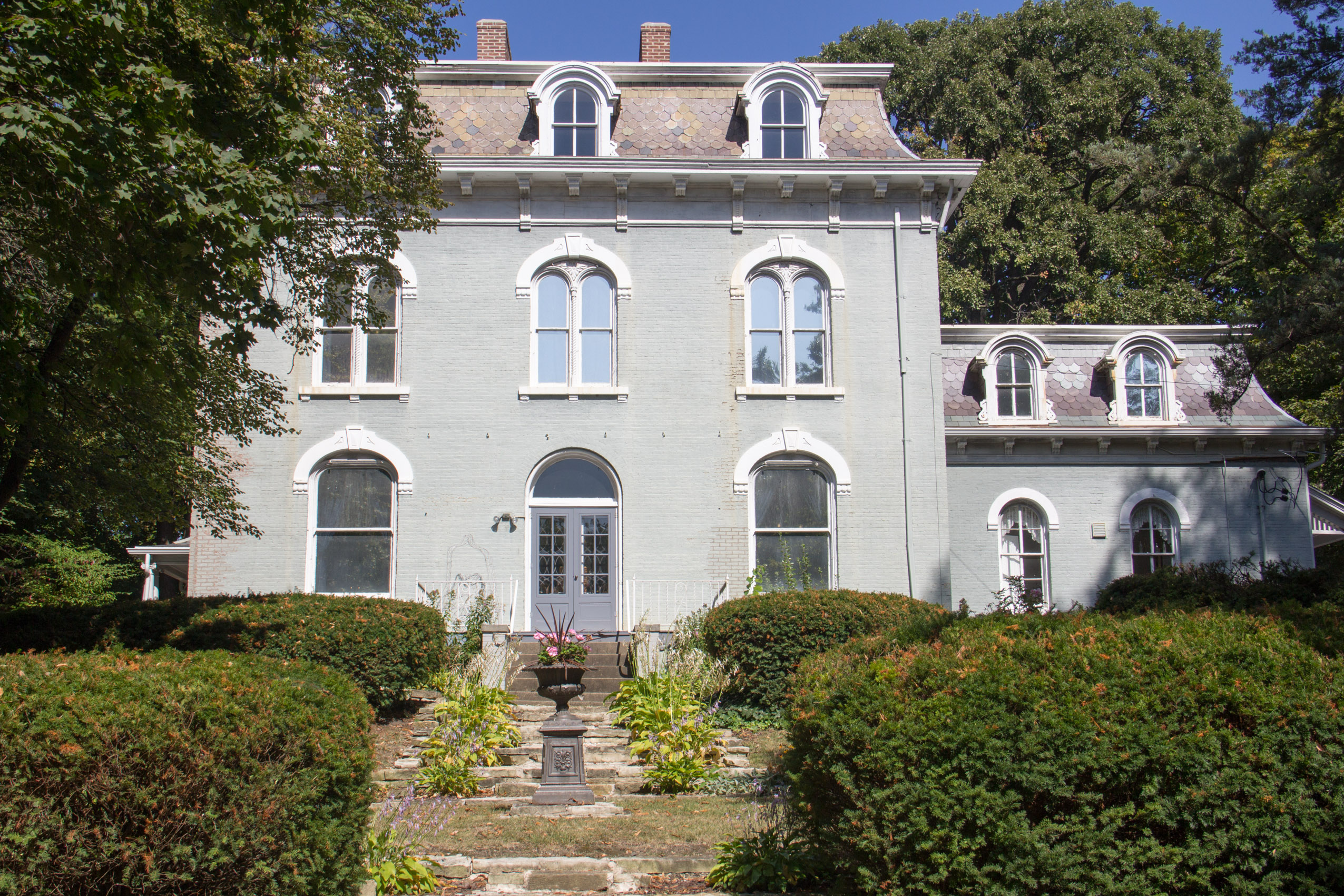 If you visit the Pettengill-Morron House 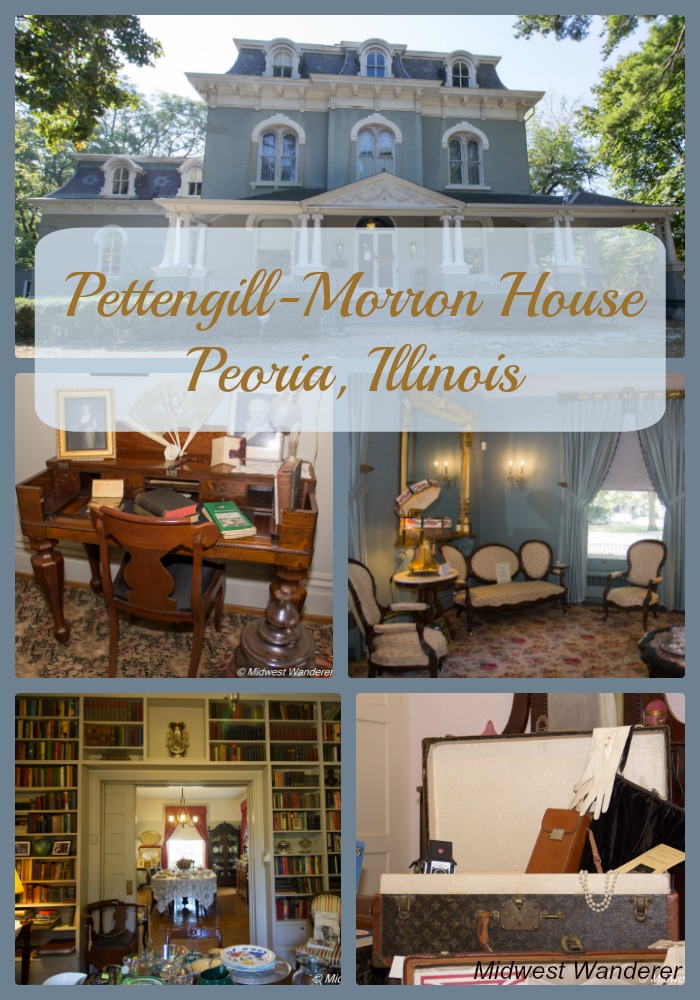 Disclosures:  The Peoria Area Convention and Visitors Bureau and the Peoria Historical Society hosted our visit to the Pettengill-Morron House. However, any opinions expressed in this post are strictly mine.

Before this summer, I knew little about Wild Bill Hickok. Then, within just a few weeks, we visited three places within Kansas and Illinois that all shared Hickok stories—quite a coincidence. I learned several fascinating facts about him. Here are END_OF_DOCUMENT_TOKEN_TO_BE_REPLACED