The brewery burns for seven hours, and the fire is put out with “green beer.” The owner is kidnapped by the mob during Prohibition. These are things movies are made of, but they are true events in the history of the oldest brewery in the Midwest and the second oldest in the nation. You’ll learn about these stories during your tours of the Minhas Craft Brewery and the Minhas Micro Distillery.

Minhas Craft Brewery Tour
The Minhas family has owned the Monroe, Wisconsin, brewery for less than ten years, but the  history goes back to 1845 when Mr. Bissinger opened the Monroe Brewery. If you grew up in the Midwest, you may remember the Joseph Huber Brewing Company, Augsburger beer and brewmaster Hans Kestler from radio commercials in the late 1970s and early 1980s. This is the same brewery.

In the beginning, beer was brewed only in the winter and produced only few hundred barrels per year. Almost 170 years and several owners, name changes and expansions later, Minhas Craft Brewery produces 275,000 barrels each year, and as of June 2014 was on track to brew 325,000 barrels for the year.

You’ll start your tour in the Lazy Mutt Lounge, where you are welcome to sample the beer and munch popcorn while watching an introductory film. Don’t worry about not having time to sample enough because you’ll have more time for that later. 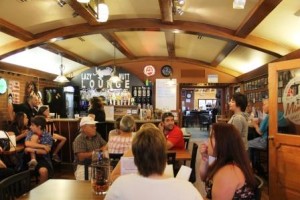 The tour then moves outdoors, where your guide will point out the two separate buildings divided by a street. The beer is brewed in one building and then sent through a tunnel beneath the street to the bottling building. 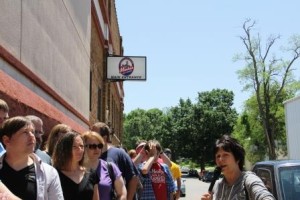 Inside the brewery, your guide will talk about the ingredients that go into beer, including barley grown in Wisconsin, and about the entire brewing process. We weren’t able to go into the brew house on the day we toured for safety (and comfort) reasons since the kettle reaches temperatures of 225 degrees.

As the tour continues across the street with the pasteurizing and bottling processes, your guide will point out the different processes used for cans and bottles. At the end of the tour you’ll be given a six-pack that includes four different beer brands, a bottle of root beer and a keepsake glass.

Afterward you may go back to the Lazy Mutt Lounge for more beer and/or soda tastings and to browse the gift shop and the museum rooms, where walls are lined with beer advertising artifacts. Even the ceiling in the ladies room is covered with beer labels. 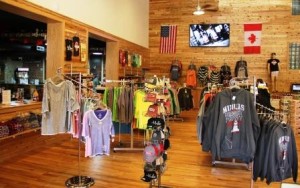 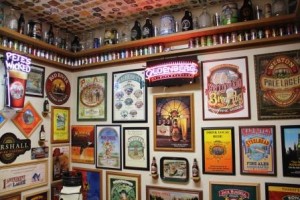 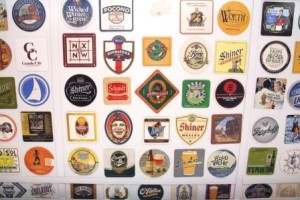 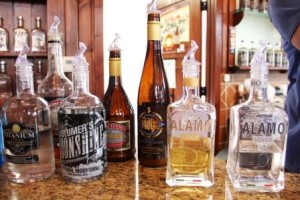 The tour officially begins with an introductory film describing the distilling process, followed by a short tour of the small distillery and the bottling process, which is far less automated than the brewery bottling process. You will receive a full-size bottle of alcohol, as well as your tasting glass, to take home with you

Be sure to stick around afterward to go back to the tasting room and gift shop where you’ll see Godstilla, the 1,000 gallon still. 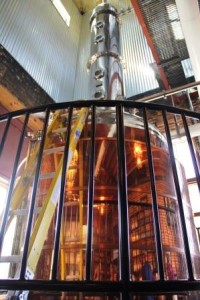 To survive the Prohibition years, the company made ice cream and near beer, among other ventures. To make near beer, full-strength beer first needed to be made and then the alcohol removed. The dealcoholizing was done in a back room. The original sign for that room now hangs in the distillery tasting room. 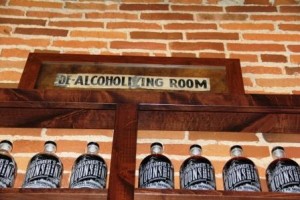 Instead of dumping the alcohol from the near beer down the drain, it was sold on the black market, in Chicago mob territory. When the mob found out about it, they kidnapped the  owner, Fred Blumer. While tasting spirits after the tour, you’ll be treated to a film that will capture your attention about the 1931 kidnapping. The tasting room happens to be Blumer’s former office.

The Minhas Craft Brewery is located at 1208 14th Avenue and the Minhas Micro Distillery is located at 1404 13th Street in Monroe, Wisconsin. Tours are conducted daily and cost $10 each; however, the take-home gifts alone are worth that amount. Check the web site for times and further details. Note that photos are not allowed in production areas.

Disclosure: My visit to Monroe, Wisconsin, was hosted by Green County Tourism, but any opinions expressed in this post are my own.

Howard Steamboat Museum in Jeffersonville, Indiana, pays tribute to the Howard family and their steamboat building company. The tour combines a history of the ornate Edmonds and Laura Howard mansion and the shipyard located across the street, which the Howard END_OF_DOCUMENT_TOKEN_TO_BE_REPLACED