One of my favorite things about my job as a travel writer is learning about a myriad of subjects. Therefore, when I was invited to Webster City, Iowa, to learn about their agricultural community, I jumped at the chance. My husband and I joined several other bloggers and their guests for three days. We not only learned about agriculture and the rural lifestyle in this community, but had a lot of fun, too.

Our host, Deb Brown, Executive Director of the Webster Chamber of Commerce, enlisted Ted Larson to drive our bus the first day. Ted had farmed locally all of his life, and knowing the community well, he gave us a short orientation. He mentioned that the area has gone through many changes in the past fifteen years. The community has lost a lot of industry, but they’ve adapted well. Ted explained, “community leaders continually work to draw new business to town.” Things have changed in farming life also. With advancements in machinery and technology, it doesn’t take as many “man hands” to farm a certain number of acres. However, it takes more acres to achieve the same income level. In addition, a college education is key to successful farming.

On our way to our first scheduled stop, Deb asked Ted to pull over so we could see the gnome home trail. A local resident had a row of trees that had died and needed to be cut down. Instead of removing them completely, he left part of the trunk and turned them into gnome homes. Piling out of the bus, we were traipsing all over his lawn to take pictures. No problem, Deb said. She’ll just send him a text to let him know we were out there. I love how friendly and welcoming everyone seems in rural communities that I visit.

Our first scheduled stop was Woolstock Equipment, the John Deere dealership in nearby Woolstock to check out some of the newest farm equipment.

Fun fact: Woolstock is the birthplace of George Reeves, the actor who played Superman in the original television series.

The John Deere dealership has been in business for 75 years, although it has gone through several owners. However, some things don’t change. One employee, Gerald, has been with the dealership since 1953.

The first thing I noticed when we went into the showroom was the large amount of John Deere toys. What fun!

After a short chat inside the dealership building, we went out to see the real equipment. Farm equipment is amazing today, with air conditioning for comfort and GPS to maximize efficiency.

Was I ever surprised when the dealership staff actually let encouraged us to drive a tractor. I declined at first. Just the size of it was intimidating. However, after some of the other bloggers claimed it was easier than driving a car, I climbed in and got behind the wheel. It really was easy, especially since I only had to steer and brake. One of the guys, seated next to me, controlled the acceleration. 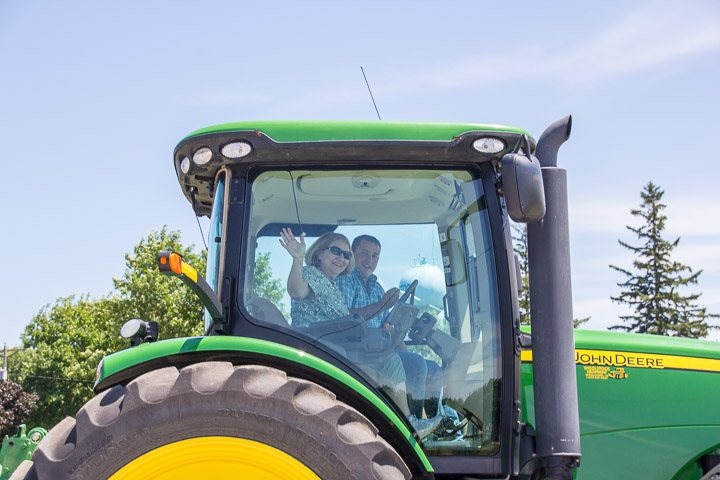 Our next stop was to a farm, but this one doesn’t use tractors, and it’s indoors. VeroBlue Farms raises fish. A fish farm in Iowa? Yep. Aquaculture is becoming quite popular as an alternative to traditional types of Midwest farming.

VeroBlue Farms is located in what was once a hog barn.  When the owners stopped farrowing their own pigs, they were looking for a way to utilize the empty building. One of the farm partners stumbled across fish tanks and feed systems at a farm show. After extensive research and due diligence, they started raising fish, specifically barramundi, which is similar to Asian sea bass.

Barramundi is a warm water fish, with the water kept around 80 degrees. The fish larvae are flown in from Australia when they’re a quarter- to half-inch in size, usually about 150,000 larvae per shipment. They start out in the nursery tank and get moved to different tanks as they grow. 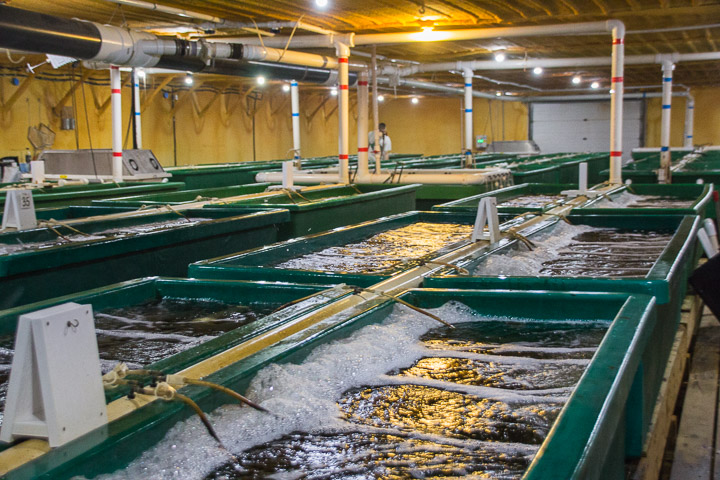 Vero Blue is also doing research and development with cold water fish, including rainbow trout and Atlantic salmon. Having received the cold water fish larvae from the Food and Drug Administration through a grant program, they are researching best practices in raising the cold water species.

With business booming, VeroBlue Farms is about to take a giant step forward. They have secured an abandoned industrial building in Webster city in which they’ll expand. Currently they have 18 tanks in the Webster City location. The new facility will have 240 tanks.

They also plan to eventually have a visitor center in the new location, which will offer tours. There will be a walkway where people can see the operation but will be sealed off from the production area. Currently they are unable to offer tours to the public.

Following our fish farm tour we went out to what Iowa is better known for—a cornfield. Zach Sukraw talked with us about the United Cooperative test plot we were visiting, where they test various varieties of corn and beans to see how they react to different herbicides, fungicides and fertilizers.

I was familiar with corn and soybean rotation. What I didn’t know is that some farmers plant corn-on-corn; that is, they plant corn year after year without rotation. This is especially popular in Iowa because of the large number of hog farms, and therefore, many farmers prefer to use hog manure as fertilizer, which works well on corn.

However, planting corn-on-corn requires additional supplements to the soil to replace lost nutrients, plus fungicides to combat pests such as root worm. All fertilizers and other supplement applications must be well regulated both for a successful crop and to meet government requirements.

Fortunately, the high-tech spraying equipment that was at the test plot safeguards against applying too much fertilizer or herbicide onto a field. It works with GPS and auto-steer. When the farmer takes the equipment into a field, he presses a button and the equipment drives itself. An automatic system ensures the spray doesn’t overlap any part of the field that has already been sprayed.

Having concluded our agriculture lessons for the day, the last stop with our travel group was dinner at 2nd Street Emporium. A downtown Webster City tradition for over 35 years, the dim ambiance was reminiscent of a supper club. I ordered the smaller portion of prime rib, which was still a good size and done perfectly to my liking, with a baked potato and asparagus. 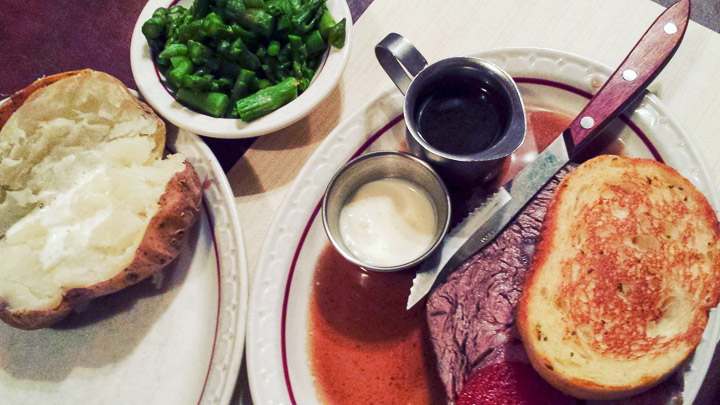 I finished off the meal with tiramisu, one of my favorite desserts, which I finished before I even thought of taking a picture of it.

With the official part of our tour ended for the day, my husband and I went over to Wilson Brewer Park, which Deb, our host, had pointed out to us as we passed it in the morning. An original train depot, moved to the park from its original downtown Webster City location, now serves as a visitor center and museum. Unfortunately, timing didn’t work out during our stay to visit the museum during operating hours. However, we did wander through the park that evening to see the first two cabins ever built in Webster City, dating back to the 1850s, one of which is on its original site. Other buildings have been moved to the park, including a church and a one-room school house.

What impressed me most about agriculture

The most impressive thing I learned on this trip was how much education is needed for a career in agriculture today. Almost everyone we met in the agriculture industry has a college degree, many with advanced degrees. Farmers must be knowledgeable in soil management, water conservation and many other aspects of science. The staff at VeroBlue Farms hold biology or other related degrees. They work closely with universities and would like to see an aquaculture curriculum at Iowa State in the future.

Stay tuned for Day 2 of our Webster City experience…coming soon.

Before this summer, I knew little about Wild Bill Hickok. Then, within just a few weeks, we visited three places within Kansas and Illinois that all shared Hickok stories—quite a coincidence. I learned several fascinating facts about him. Here are END_OF_DOCUMENT_TOKEN_TO_BE_REPLACED