Wolf Park docent, Caity, started howling, wolf-style. One by one, Bicho, Fiona, and Kanti tilted their snouts skyward and joined the howl. A few moments later we heard more howling in the distance. This was our greeting to Howl Night at Wolf Park in Battle Ground, Indiana.

What is Wolf Park?

Dr. Erich Klinghammer  founded Wolf Park research facility in 1972. He wanted to learn as much about wolves as possible. His intent was to save them in the wild, as wolves were rapidly diminishing. Among other things, Dr. Klinghammer wanted to research how wolves interact with each other in a pack and with wolves in neighboring packs. Until then, scientists studied wolves by what they left behind. They’d study wolf tracks, feces, and partially-eaten carcasses. The 7-acre Wolf Park allows for more in-depth research into wolf behavior and determining why and when they howl.

Every Saturday evening, year-round (plus Friday evenings in the summer months), Wolf Park presents Howl Night. The evening begins with a 15-minute Fox Talks pre-show. On the chilly April night we visited, we and other guests gathered around a pen where docent Khaz filled us in on fox behavior. She talked about the differences between foxes and wolves, and we watched as Khaz interacted with the resident foxes. 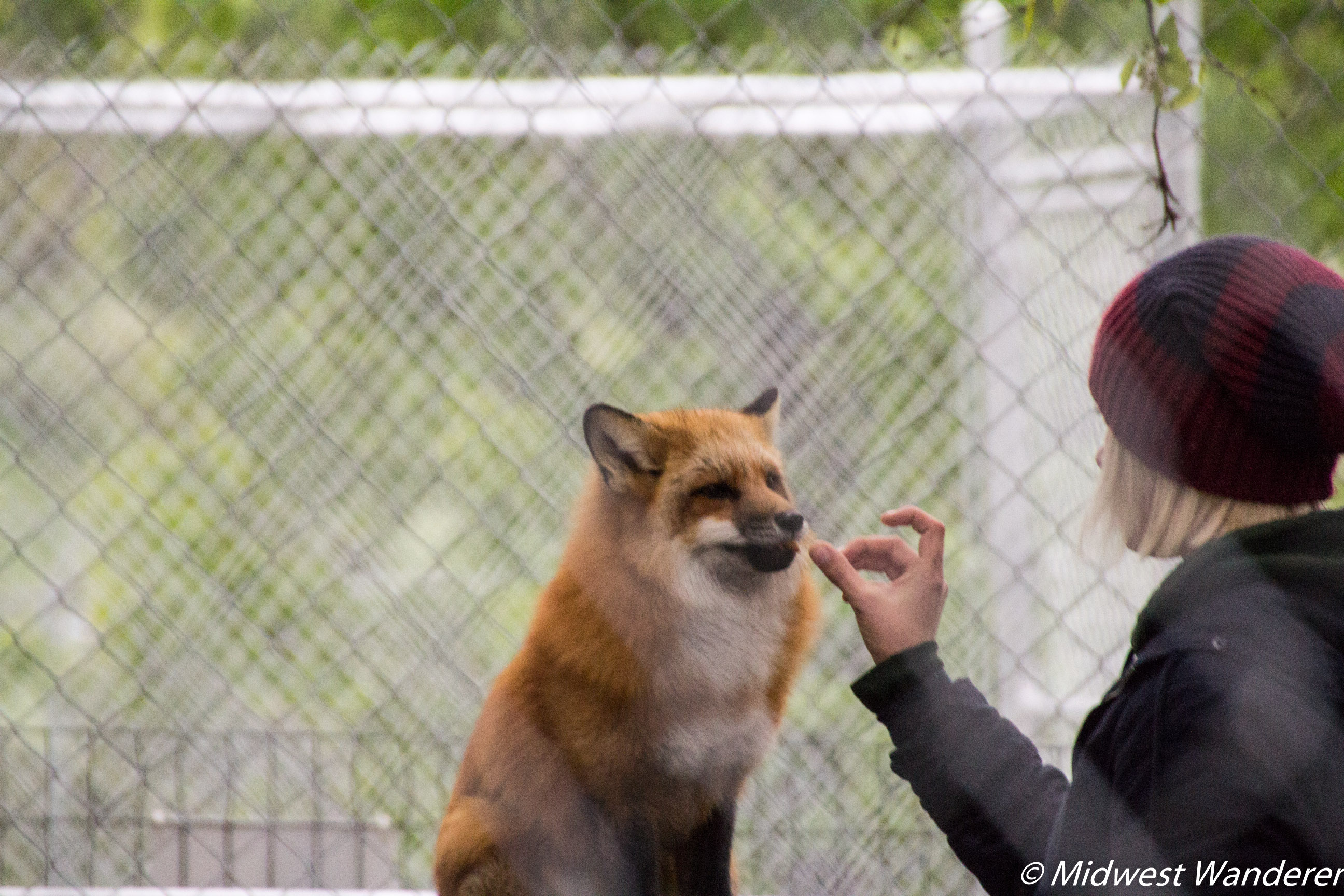 Fun fact: Red foxes live in the wild in every state except Florida. They are the most widely distributed canid in the world.

Following Fox Talks we took a seat in bleachers across from the 7-acre semi-natural enclosure where siblings Bicho, Biona, and Kanti live. Docent Caity began the presentation outside the enclosure with the first howl of the evening. As we heard the distant answer to the wolves’ howls, Caity pointed out that the answering howl came from other wolves in the park. They were joined with barking, yodeling, and yelps from two coyotes that also live in Wolf Park. There is a distinct difference between a coyote howl and a wolf howl. 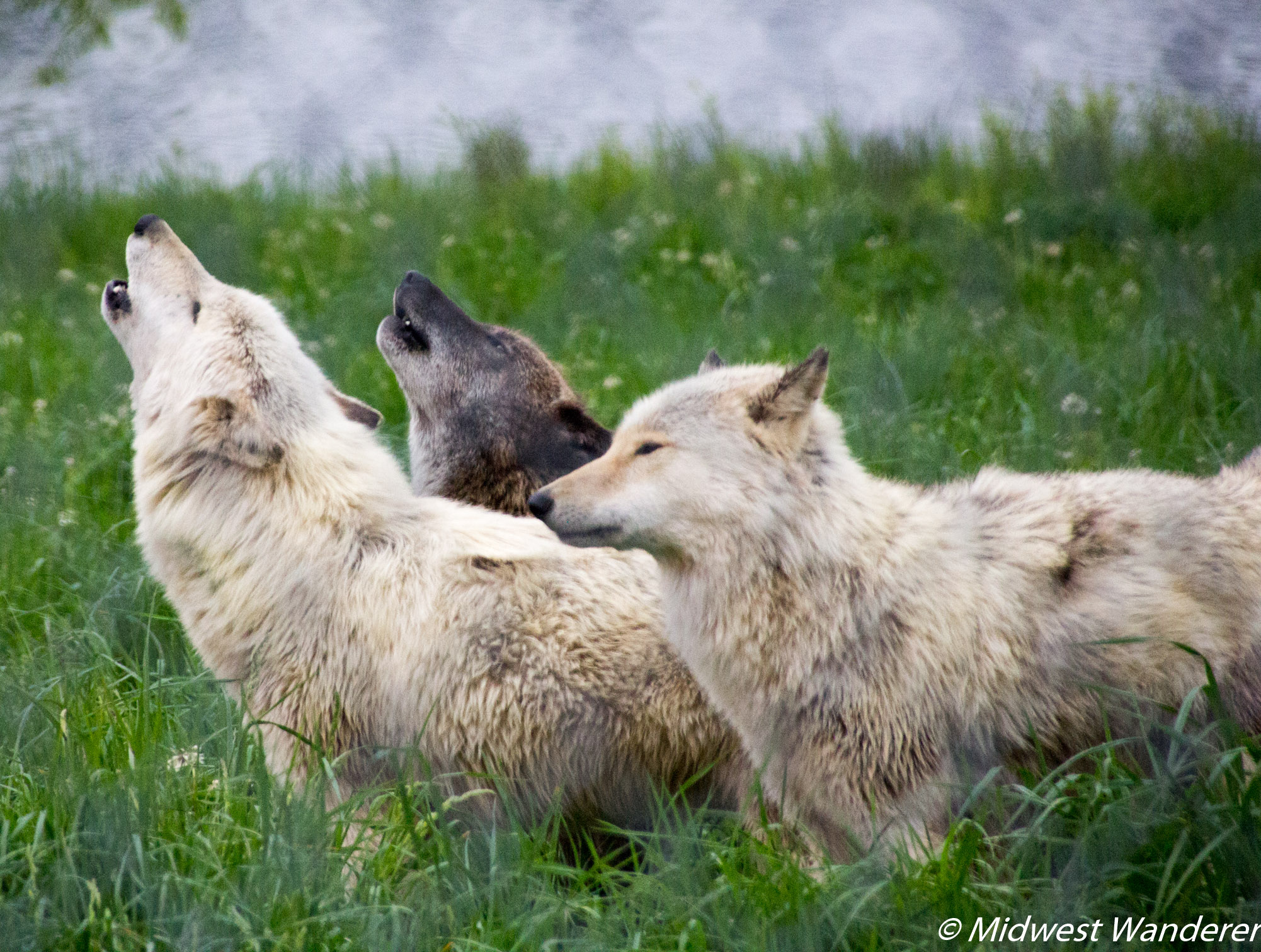 Once the wolves stopped howling, it was audience participation time. We all started howling, waiting for the wolves to join in. They didn’t. But later in the show we tried it again. In a few moments the wolves joined in the howl.

After Caity introduced us to the Wolf Park wolves and wolf life in general, docent Dana took over the microphone. Dana and fellow staff member Monty entered the enclosure with the wolves. What we saw was amazing! One of the wolves jumped up on Monday and licked his face. (Warning: Don’t try this in the wild.) 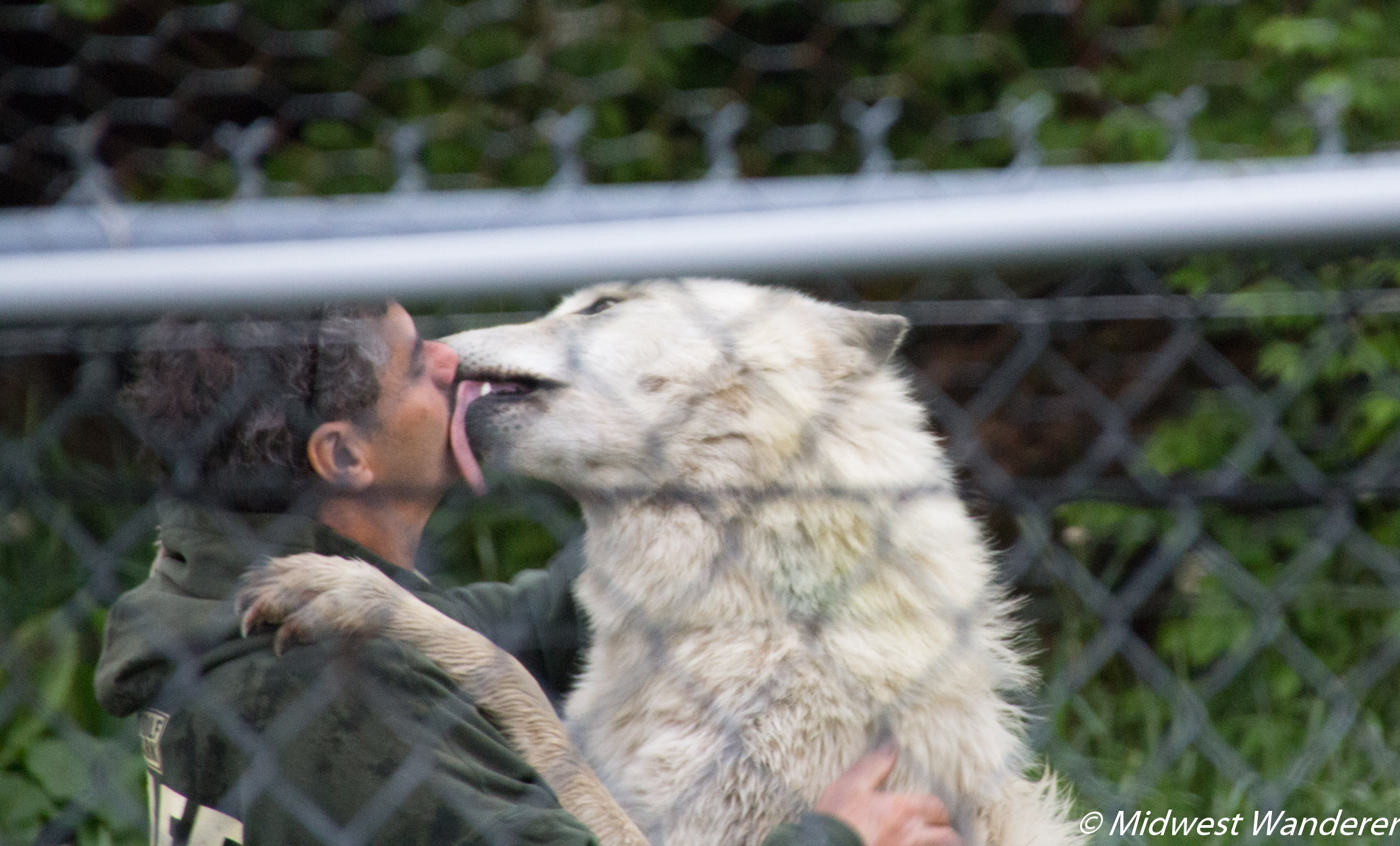 These wolves were more like household canine pets than wolves. Then again, they were born in captivity and have interacted with humans from birth. And our pets come from the same line as wolves, right? 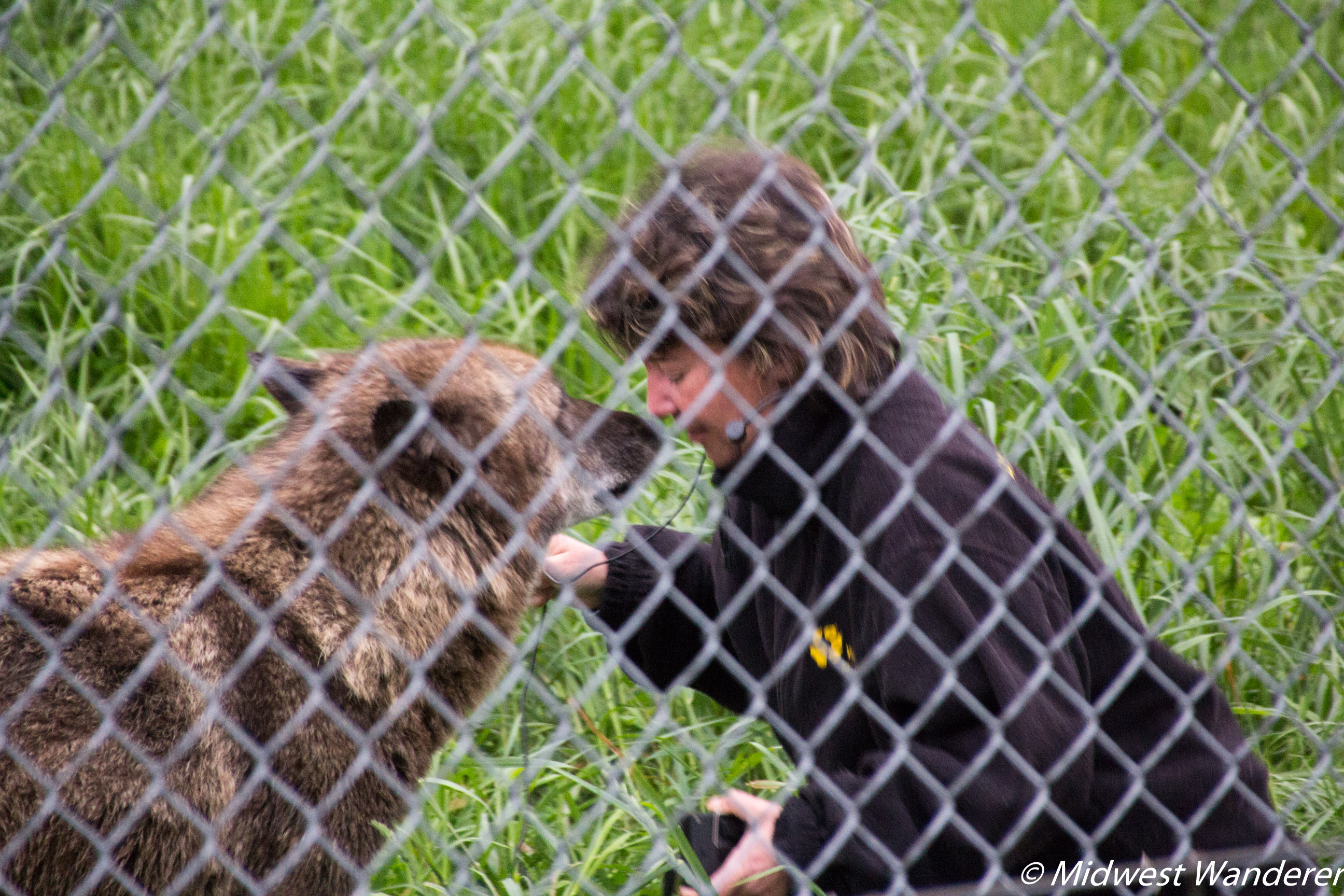 If you go to Wolf Park:

We stayed at the Homewood Suites by Hilton Lafayette during our visit to Lafayette and West Lafayette.  Check room rates. 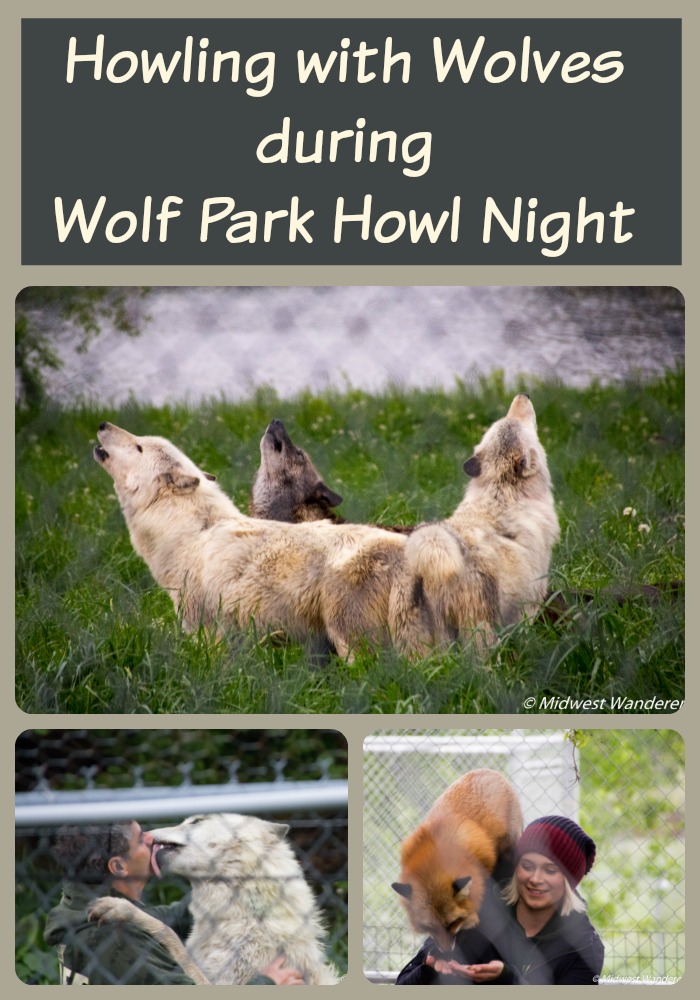 Disclosures: Visit Lafayette-West Lafayette hosted our visit to the area. Our admission to Wolf Park Howl Night was complimentary. However, any opinions expressed in this article are my own.
This article contains an affiliate link. If you book at hotel room through the “Check room rates” link above, I will receive a small commission at no additional cost to you.

5 thoughts on “Howling with Wolves at Wolf Park”

Before this summer, I knew little about Wild Bill Hickok. Then, within just a few weeks, we visited three places within Kansas and Illinois that all shared Hickok stories—quite a coincidence. I learned several fascinating facts about him. Here are END_OF_DOCUMENT_TOKEN_TO_BE_REPLACED