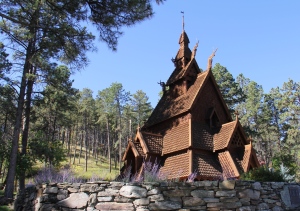 Tucked away at the end of a drive through a residential neighborhood, the Chapel in the Hills, like the ponderosa pine that surround it on three sides, rises to the sky, growing narrower as it grows taller. Built completely of Douglas fir, the chapel blends with the natural beauty of South Dakota’s hills and is worth a visit on your Rapid City trip, if not for the spiritual aspect, then for the serenity of the grounds and architecture of the chapel.

An exact replica of the stave church at Borgund, Norway, the chapel was built in 1969 as a site from which to broadcast the Lutheran Vespers radio program, which subsequently moved to Minnesota. A few modern conveniences, like well concealed lighting and heat and metal nails over which wooden pegs were placed, as well as the type of wood used in construction, are the only differences between the original Borgund chapel that dates back to the 1100s and the Chapel in the Hills.

Inside, a small stone altar stands out from the surrounding wood structure. In contrast to intricate carvings throughout the chapel are sixteen plain wood benches that serve as pews. An audio recording in the chapel describes the meaning of the various aspects of the chapel design and the carvings. 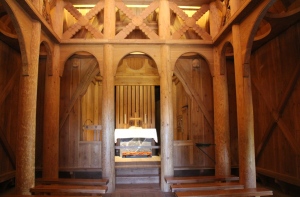 Behind the chapel is a bell tower and a short prayer walk through the woods that leads to seven statues. Pick up a brochure at the start for the one- or two-line prayers to read at each station. 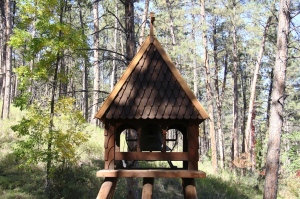 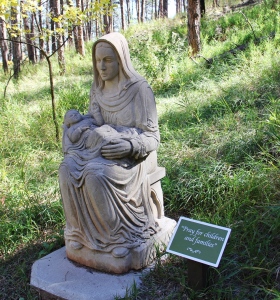 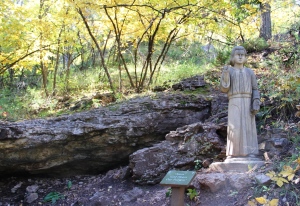 A gift shop, which was originally used as the reception building and office of the Lutheran Vespers, is a replica of a Norwegian “stabbur,” a storehouse used on farms. The sod roof is planted with sedum. In the mountains of Norway, the roofs of the stabbur extended the grazing area of goats.

Also on the property is a small museum, an original Norwegian settler’s log cabin that was moved to the site from Keystone South Dakota. The doorway is flanked by carved statues of Ole and Lena, the subject of many jokes by Scandinavian-Americans. The museum houses items brought over by immigrants and items used in their everyday lives. 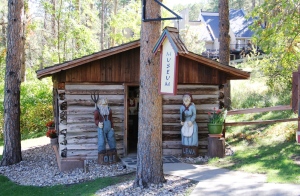 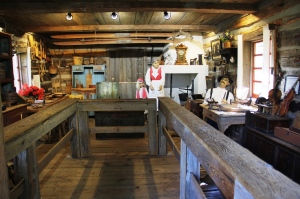 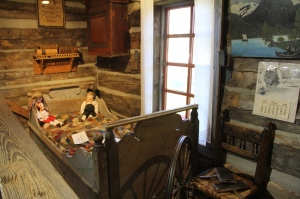 The Chapel in the Hills, located at 3788 Chapel Lane in Rapid City, is open May through September. A worship service is held at 7:30 every evening from Memorial Day through Labor Day. Check the web site for further details.

My accommodations in Rapid City were provided by the Rushmore Plaza Holiday Inn.

Disclosure: My visit to the Chapel in the Hill was hosted by the South Dakota Department of Tourism and the Rapid City Convention & Visitors Bureau. However, all opinions in this article are my own.

2 thoughts on “Chapel in the Hills, Rapid City: Norwegian Serenity”

Before this summer, I knew little about Wild Bill Hickok. Then, within just a few weeks, we visited three places within Kansas and Illinois that all shared Hickok stories—quite a coincidence. I learned several fascinating facts about him. Here are END_OF_DOCUMENT_TOKEN_TO_BE_REPLACED