Aviator Charles Lindbergh gained his fame as the first person to successfully complete a solo transatlantic flight. The Charles Lindbergh Museum in Little Falls, Minnesota, chronicles his life and career with exhibits and films. On a tour of the adjacent Charles Lindbergh House, however, visitors are treated to stories of his childhood and many of his boyhood antics.

Thank you to Visit St. Cloud and Minnesota Historical Society for hosting us at the Charles Lindbergh House and Museum.
This article may contain affiliate links, through which we may receive a small commission. Read our Privacy Policy for more information on affiliate links.

In this episode, we’re going to Little Falls, Minnesota, to the Charles Lindbergh House and Museum, which is owned and operated by the Minnesota Historical Society.

We started out in the museum, where they have exhibits, like some model airplanes and a flight simulator. The simulator is the same size as the Spirit of St. Louis, the plane that Lindbergh flew in the first solo transatlantic flight, so you can get a feel for how small it was. 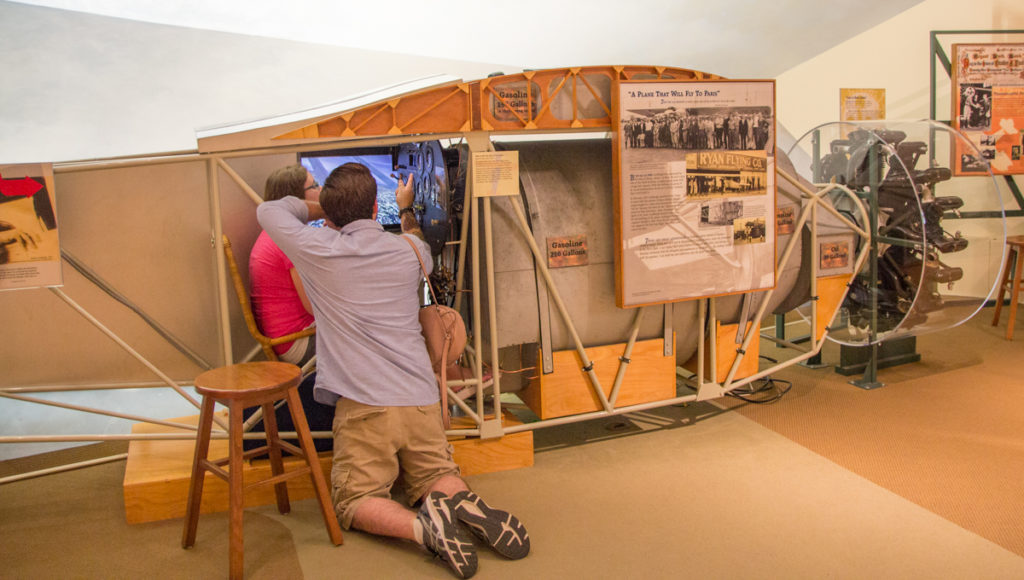 Unfortunately, we didn’t have time to go into the theater, but that’s where they show footage of historic flights.

Another thing in the museum is a 1959 Volkswagen Beetle that Lindbergh bought in Paris and drove on four continents.

But what I liked most was the tour of the house. You walk over with your tour group from the museum to the house. The house isn’t anything special as houses go; it’s the stories that our guide told about Charles as a child that were intriguing. 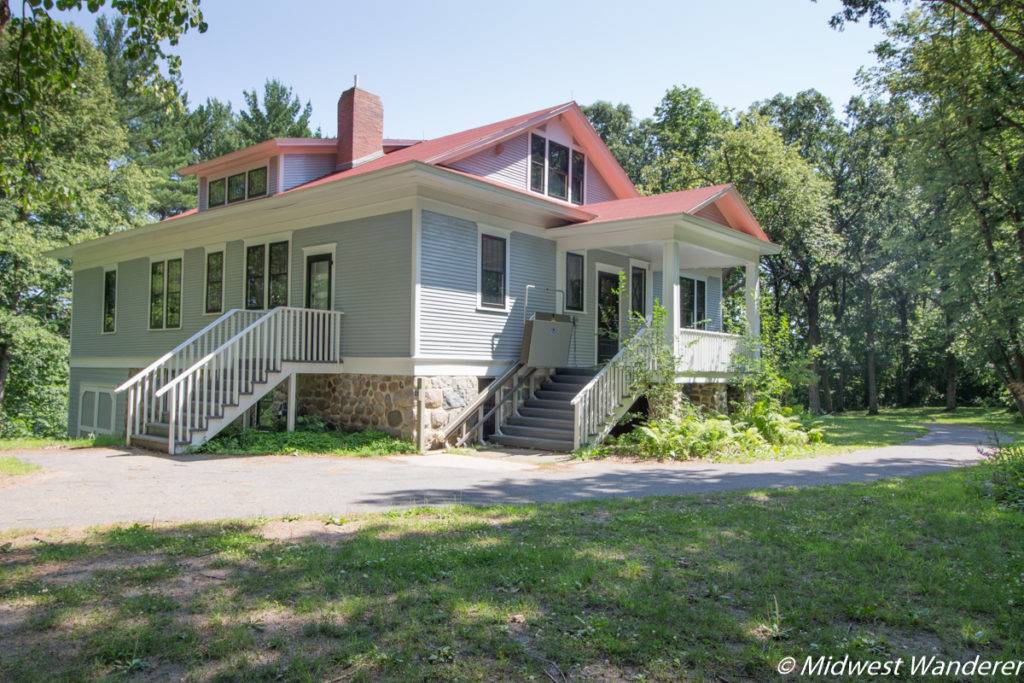 Actually, it’s not the original house. The original was a three-story mansion. It had electricity and two flush toilets, which was unusual in 1901, especially in rural Minnesota. But it burned about four years later, when Charles was only about three years old.

When they built the house that stands today, they made it much smaller, with no electricity. That’s because Charles’ father, by that time, was elected to Congress, so they spent most of their time in Washington D.C. And then Charles’ parents separated, so it was just Charles and his mother living in the house.

At that time, the house was a 100-acre small dairy farm. It wasn’t all wooded like it is today. The trees came later, when the adult Charles became an environmentalist and planted all of them. And on a day as hot as it was when we were there in July, we were thankful for the trees.

As our tour guide started telling us stories, she passed around a platter of cookies.

It’s not surprising that they were Charles’ favorite cookies that his mom—her name was Evangeline—used to bake for him. Swedish party cakes, they’re called. And the folks at the Minnesota Historical Society now have a local bakery bake them for guests that tour the house. They still use Evangeline’s recipe. And they shared the recipe with us. 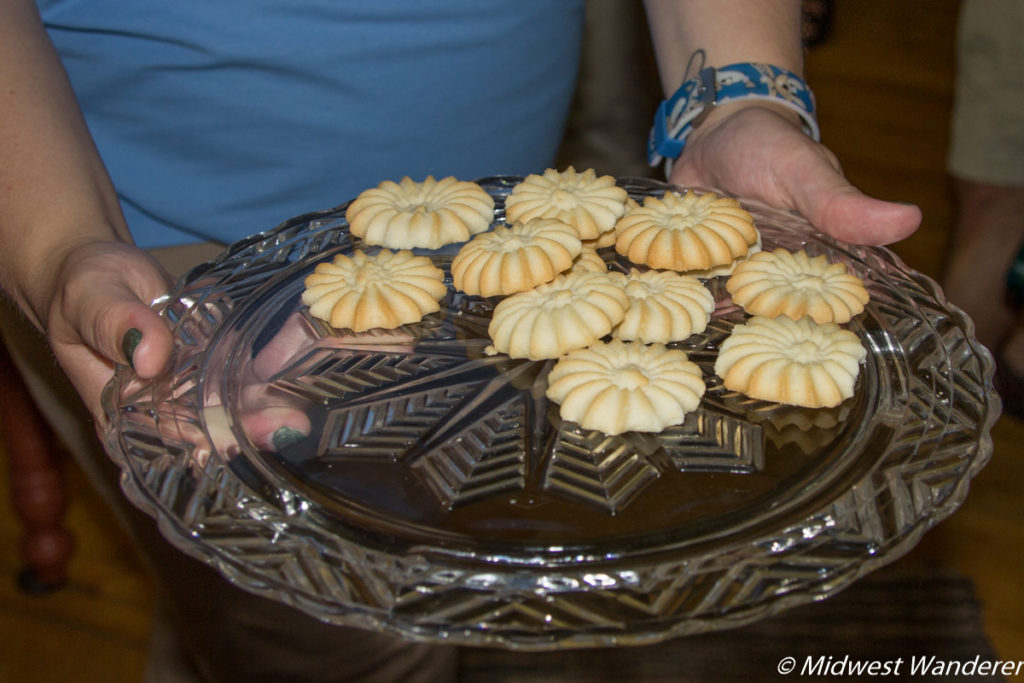 Bring in the Ice

One of the first stories we learned was how one of Charles’ chores was to bring blocks of ice from the ice house and put it in the icebox. And that’s because he insisted on doing it, not because he was told he had to. He was only about six years old, and the blocks of ice weighed about 50 pounds, much too heavy for him to lift. So he built a ramp at the ice house. He pushed the block of ice down the ramp into a wagon. Then he built another ramp at the house and devised a pulley system to get the ice up into the house and the icebox. At six years old!

Another story is about his chore of chopping wood. This one is a little less engineering-like. It was a cold, wintery morning, and he really didn’t want to go outside to chop the wood. So he brought it inside and chopped it on the kitchen floor. Today there are still marks in the wood floor, scars from him chopping the wood. I’m sure his mother wasn’t too happy about that.

When the family would go to Washington D.C., Charles was afraid neighbor kids would come into the house while they were gone and play with his toys. So he hid them. He pried a couple of the wainscoting boards off the kitchen wall, knocked a hole through the plaster, hid his toys in the gap behind the wall, and then put the wainscoting boards back. 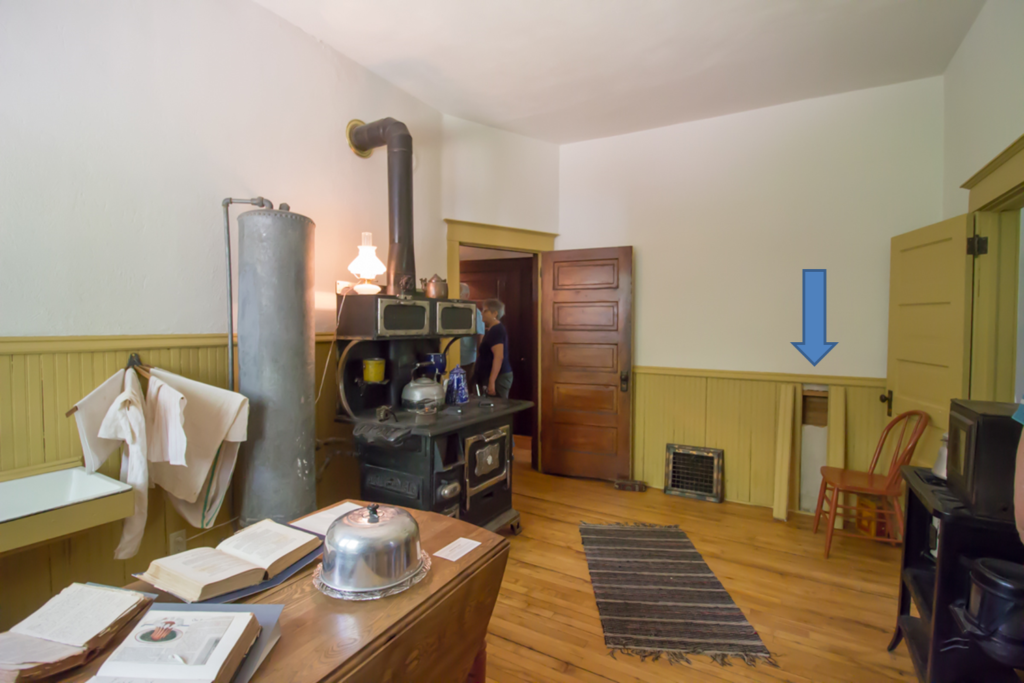 It was also in this house that Charles saw his first airplane. He was playing upstairs in the attic, when he heard a noise different from any noise he ever heard before. So he climbed out the window and stood on the roof. And he looked toward where the noise was coming from. A pilot was in town to do an air show, they called it barnstorming, and he was offering rides.

Of course, Charles wanted a ride. The cost was $5 for five minutes. That’s the equivalent of about $125 in today’s money.

Which they probably could afford, but this was one time his mother wouldn’t give in. It was too dangerous. But that’s when Charles got excited about planes, and of course, he never lost that excitement.

Leaving School for the War Effort

Charles hated school. He didn’t do well. Not that he wasn’t smart. He just couldn’t sit still. So when he was in high school—it as during World War I—there was a program where you could skip school and still get credit if you worked on a farm to help the war effort. So Charles decided to expand their small farm, and his mom agreed. They doubled the number of dairy cows from 20 to 40 and added sheep, hogs, geese, and chickens. 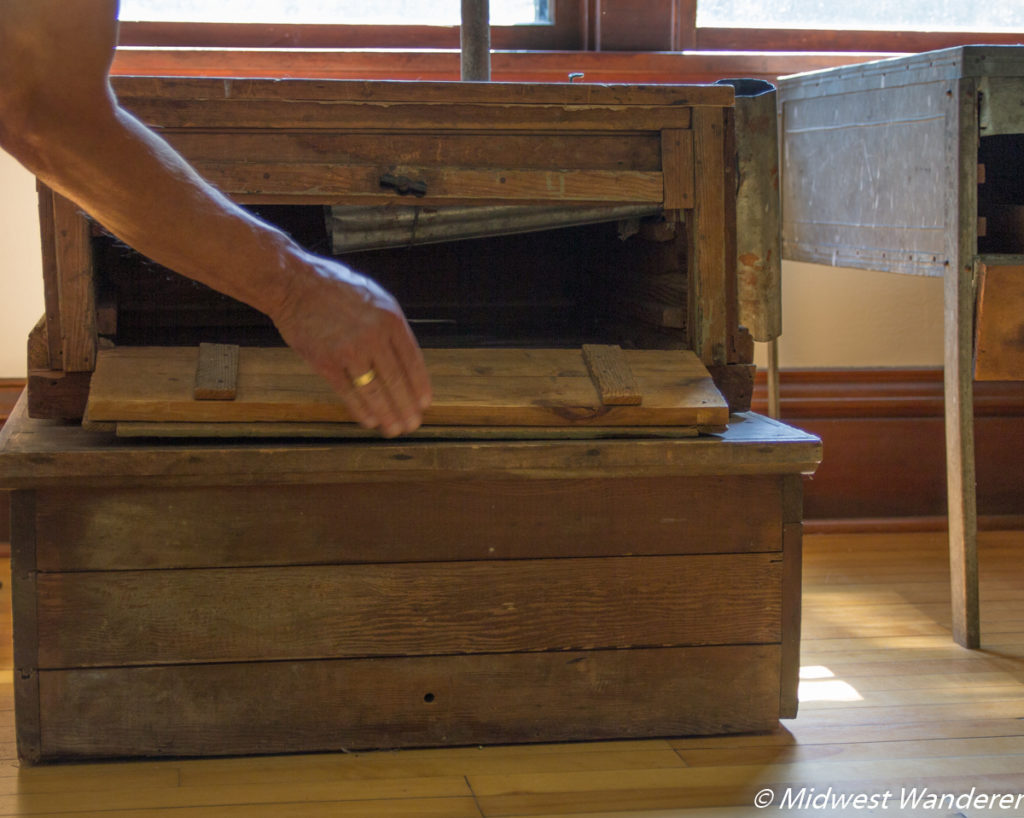 He kept the incubators in the dining room for convenience sake because every two or three hours you had to take out the crates and turn all the eggs. He had those for two years and hatched about 2,000 chicks.

The incubators were run on kerosene and one night one of the incubators caught on fire. Charles tried to save the eggs inside and started lifting them out. Of course, they were hot, and he dropped them. Today, there’s still a scorch mark on the floor.

It’s a good thing Charles slept nearby. In fact, he made the screen-in front porch his bedroom. In the summer, it was cooler there. But he slept them during the winter, too, just because he liked the outdoor feel. He bundled up, and took his dog out there with him, and they kept each other warm.

So there were more stories on the tour, and we got to try out stereoscopes. And any piano player was invited to play on the 116-year-old piano.

Our last stop on the tour was the garage, where we saw the 1916 Saxon that Charles’ father (who was also named Charles) purchased. He bought the Saxon because it came in colors. Saxons, at the time, were the only car that came in any color besides black, and Charles Sr. wanted to get people’s attention but didn’t want to be too flashy with an expensive car.

The Saxon was a mid-range priced car. It’s one of the first electric start cars, but being such new technology, it failed a lot. So it did still come with a crank as a backup, which he had to use most of the time.

And you put the gas in on the interior of the car, in front of the passenger seat.

It didn’t have a gas pump, it used gravity to move the gas from the gas tank to the engine. So it worked great if you were going straight or downhill. But uphill it didn’t work very well. So around Minnesota it worked fine. 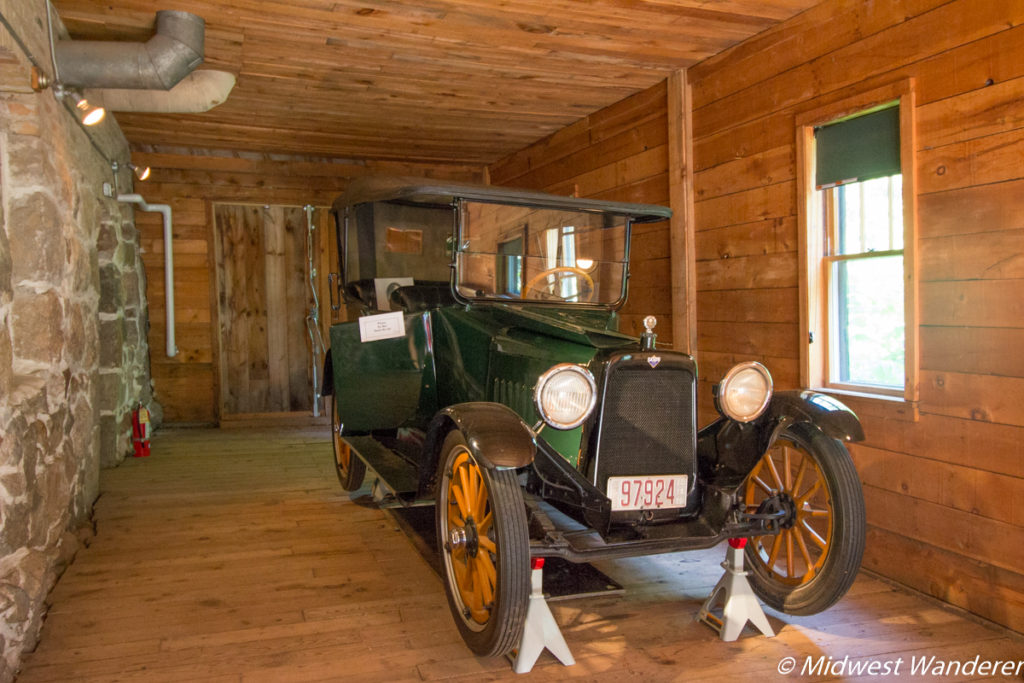 However, Charles Sr. didn’t like to drive. In fact, he thought it was unprofessional for him to drive his own car. So 14-year-old Charles became his dad’s chauffeur, drove him all over Minnesota.

Evangeline and her uncle planned a trip to California. They were going to take the train. Well, Charles wanted to drive the car, which didn’t make sense. It didn’t go that fast, maybe 45 miles per hour tops, and of course, at that time, the roads were dirt. But Charles—who was just a little spoiled—got his way, so they drove to California. Well, they got to the Rocky Mountains, and of course, they had to go uphill. Uh-oh. The car doesn’t go uphill. So what did they do? Backwards. Yep, Charles drove the car backwards through the uphill parts of the Rocky Mountains. I can’t even imagine.

Following the house tour, we went across the street to the Charles Lindbergh State Park. The house used to be part of the state park, as well.

The Lindbergh family had donated the entire 110 acres to the state. The state later gave the house part of the estate to the Minnesota Historical Society, who runs it today. The rest of it, across the street, is still a state park.

We spent just a few minutes there, because it was hot and the mosquitoes were awful. But that’s where the tenant farmer’s house was. The tenant farmer took care of the farm—in reality, ran the farm—when the Lindberghs were in Washington D.C. Unfortunately, the tenant farmer house isn’t in such good shape anymore. 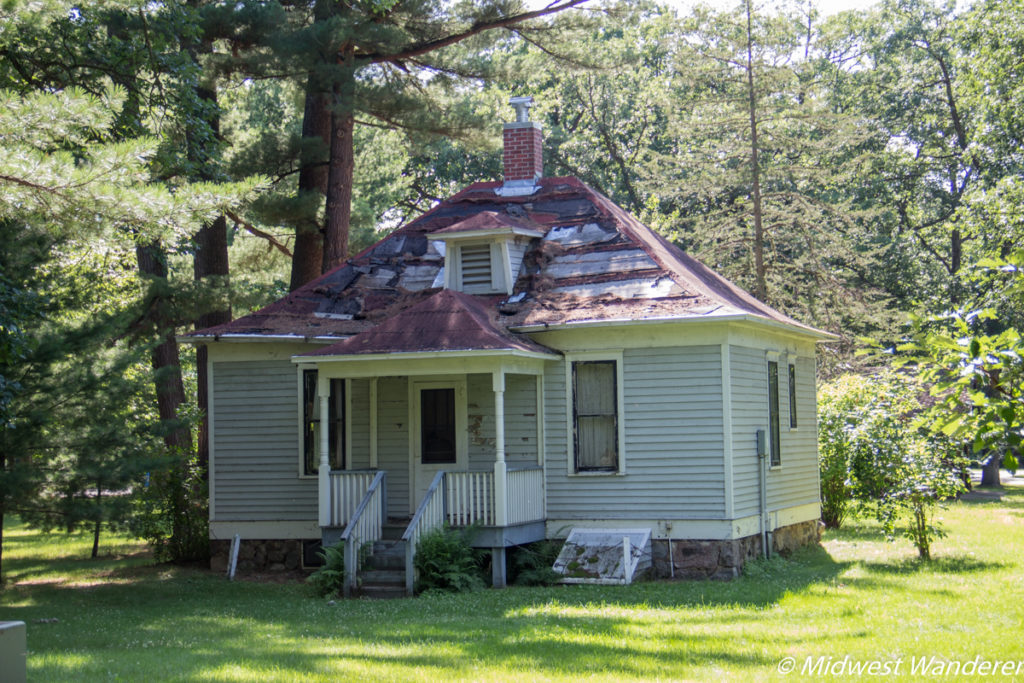 More Details about the Charles Lindbergh House and Museum

The Charles Lindbergh House and Museum, located in Little Falls, Minnesota, is open during the summer, Memorial Day through Labor Day, Thursday through Sunday. Check the website for admission prices and other details.

Thank you for reading Midwest Wanderer. Don’t miss a post. Enter your e-mail address in the upper right and click Subscribe to be notified whenever I publish another post. Subscription is FREE. After subscribing, be sure to click the link when you get the e-mail asking you to confirm.   – Connie

Before this summer, I knew little about Wild Bill Hickok. Then, within just a few weeks, we visited three places within Kansas and Illinois that all shared Hickok stories—quite a coincidence. I learned several fascinating facts about him. Here are END_OF_DOCUMENT_TOKEN_TO_BE_REPLACED