An Evansville, Indiana, local recommended we try the Turoni’s pizza, voted best in Indiana.  Another local argued that Roca Bar, where the very first Evansville pizza was served, is the best.  As a lifelong Chicagoan, I rarely eat pizza out of town.  When I do, I’m usually disappointed. It’s rare to find one as good the Chicago pizza I grew up on.  However, with such rave reviews of these pizzas, we put them to the test.  So we tried both.

Roca Bar has been around since 1943 and began serving pizza ten years later.  They say it was the first Evansville pizza every introduced.  Hard to believe the city didn’t have pizza before 1953, but apparently no one has contested the claim.

I’m not sure how long Roca Bar’s neon sign has been in front of the business. Judging from the style, it’s been there from the start, or at least long enough to be called nostalgic. Inside, the nondescript decor—plain brown paneling and wood-tone Formica tables—are most likely original, too. 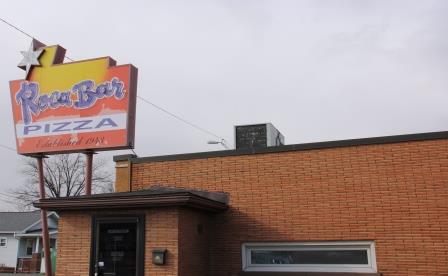 Besides the basics, Roca Bar offers an extensive selection of specialty pizzas, including:

The pizza crust was paper thin, crisp as a cracker. The sauce was on the sweet side, and the sausage has a trace of spice. The cheese was done just right for our tastes, a bit browned and gooey.  I was surprised to see the pizza cut into squares, Chicago style, and surprised, too, that it was as good as the super-thin crust Chicago pizzas I’ve had. 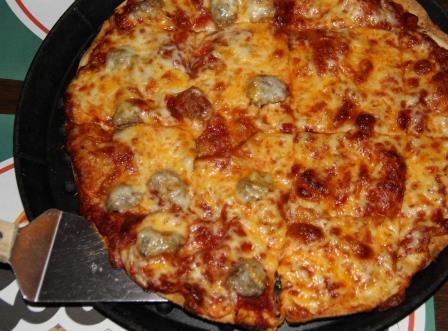 Turoni’s pizza was introduced three decades ago.  They boast they’ve been voted best pizza in Indiana, but in researching, I couldn’t find by whom.  I did see several individual online reviews, however, claiming that Turoni’s was the best pizza they’d ever had.

The whimsical murals painted on the brick historic Evansville building invite you inside where the Italian country décor, with stenciled grapevines on booth backs, art and fun objects covering the walls, Tiffany-style lamps, and a fireplace, make you feel at home. 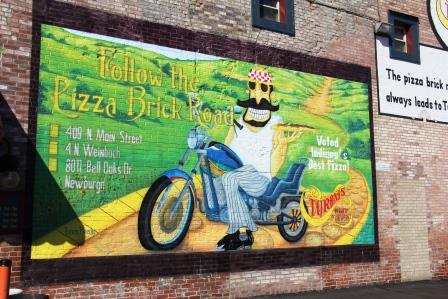 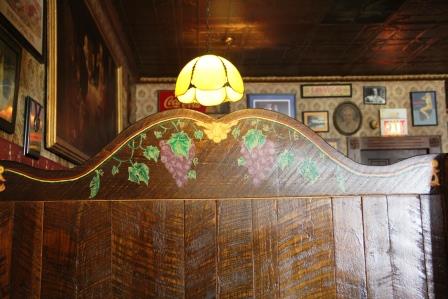 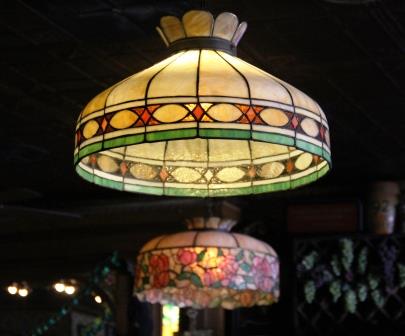 Some of the gourmet pizzas that Turoni’s offers are:

Turoni’s crust is paper thin like Roca Bar’s, although ours wasn’t crisp all the way through.  The sauce had a tang to it, and the sausage was milder than Roca Bar’s.  The cheese was done just right for my taste, and Turoni’s pizza was also cut into squares, Chicago style. 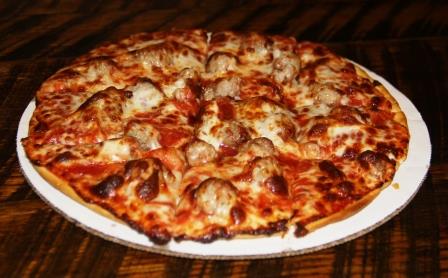 Turoni’s is a microbrewery, too, the only microbrewery in Evansville.  Five craft beers are always available, with others available seasonally.

Turoni’s is clearly the ambiance winner.  And if you’re looking for handcrafted microbrews, that’s the place to go.  The pizza decision was close, though, both similar, both very good. However, when it came to a decision, Roca Bar won by a smidgen, with a crispier crust and sauce and sausage that we both preferred.

We stayed at the Tropicana Evansville during our visit to Evansville. Check rates her.

Disclosure: This article contains an affiliate link. If you book a room through the link above, I will receive a small commission, at no additional cost to you.

Howard Steamboat Museum in Jeffersonville, Indiana, pays tribute to the Howard family and their steamboat building company. The tour combines a history of the ornate Edmonds and Laura Howard mansion and the shipyard located across the street, which the Howard END_OF_DOCUMENT_TOKEN_TO_BE_REPLACED