You’ve heard of Daniel Boone, the early American frontiersman. Chances are, however, you’ve never heard of Squire Boone. Squire was Daniel’s younger brother, ten years his junior. Just as daring as his older brother, Squire explored territories that would become the states of Kentucky and Indiana. He discovered what is now known as Squire Boone Caverns and lived the last part of his life there. Squire Boone built a grist mill and village near the caverns, which are located near Indiana’s first capital, Corydon. At his request, when he died, Squire’s remains were placed in the caverns. Today, a tour of the cavern takes you past not only gorgeous formations, but also a casket that contains Squires remains. 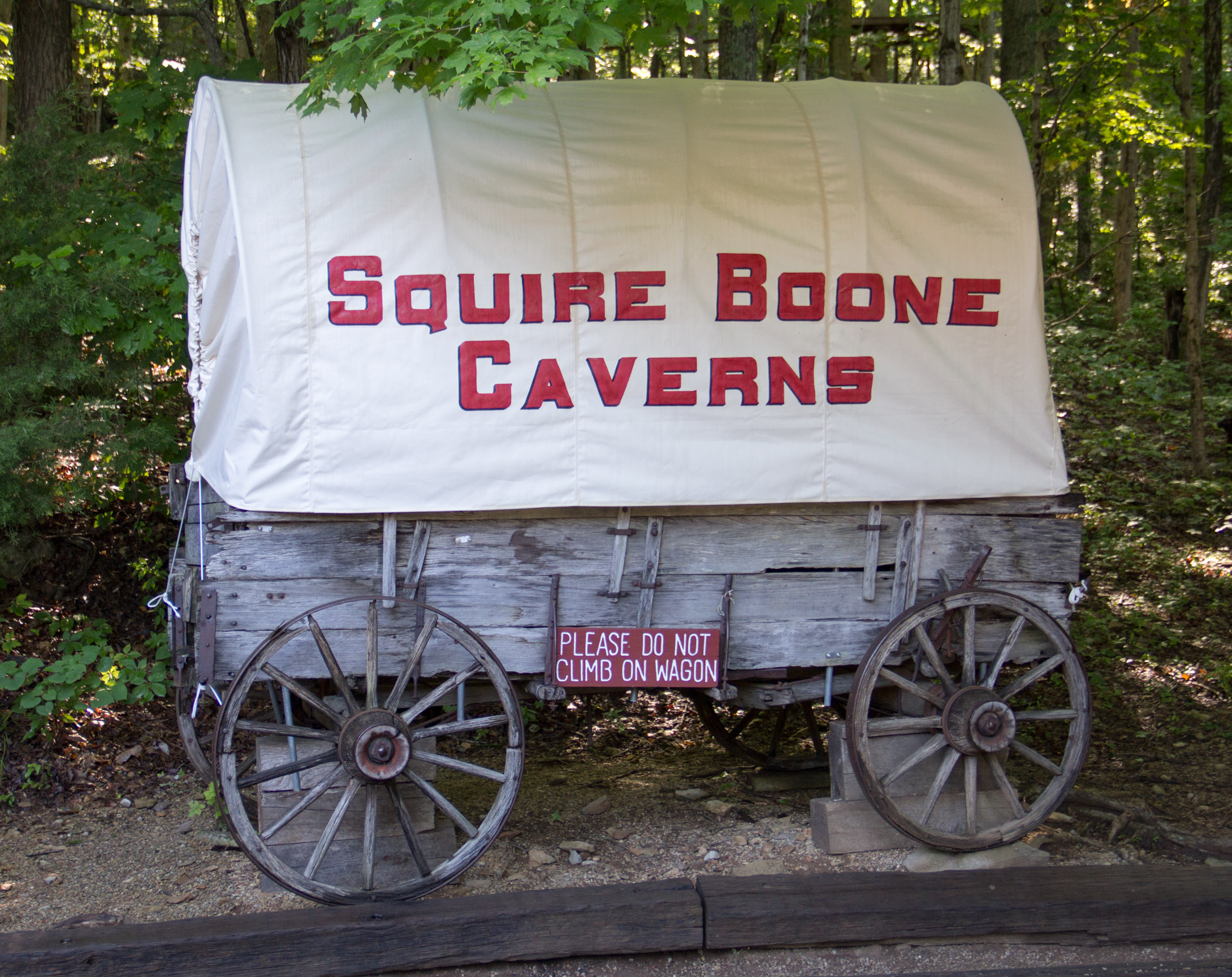 We toured Squire Boone Caverns twice within a year. On our first visit, the caverns just reopened following some revamping. Besides doing work within the caverns, they also added a new audio system. Guests are given headsets to wear, so you can hear clearly without the guide shouting loudly, especially during full tours.

The tour actually begins before you even get to the cavern. Hiking the path toward the cavern entrance, our guide pointed out a tree with a carving, “D Boone 1790.” Daniel Boone? Maybe. 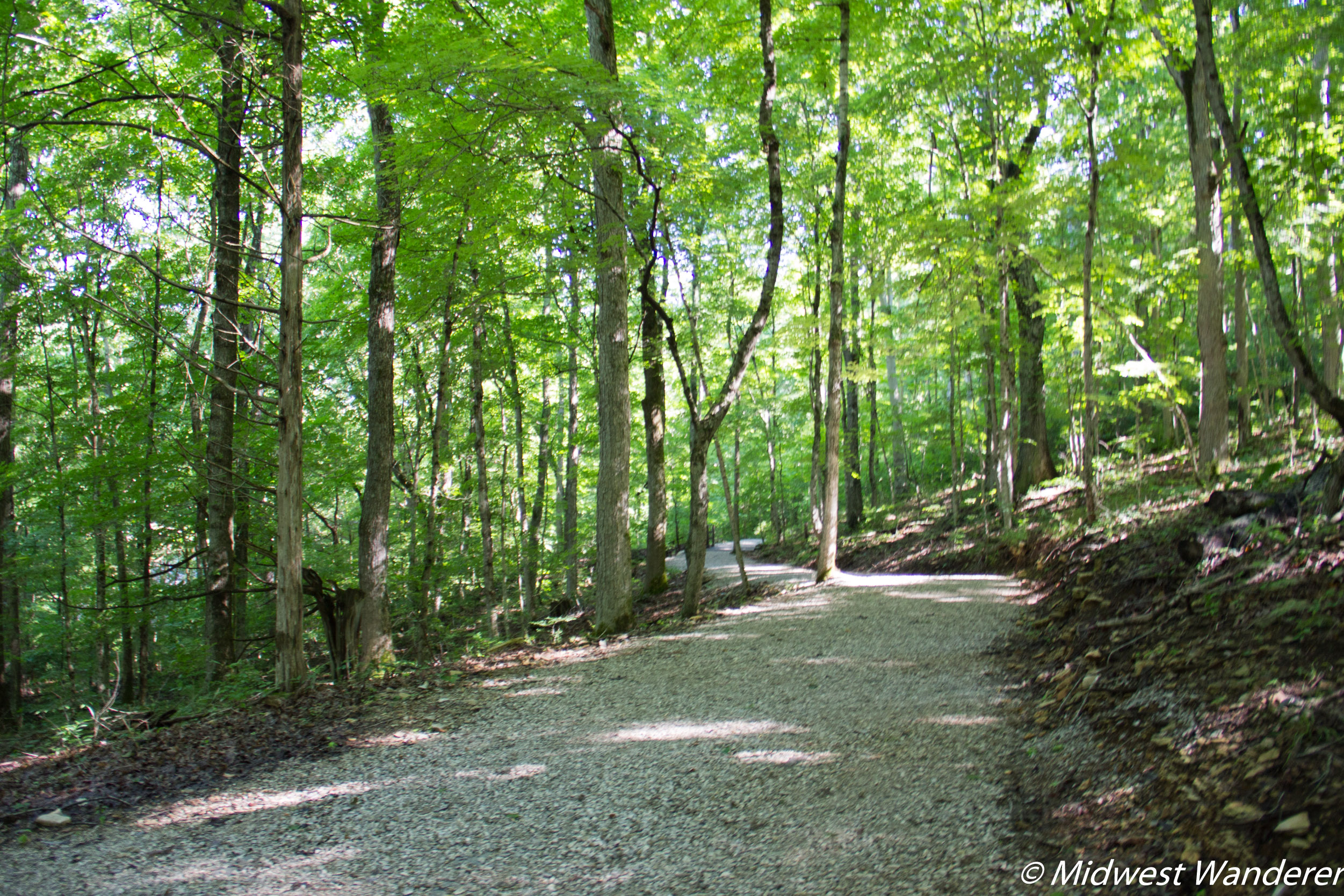 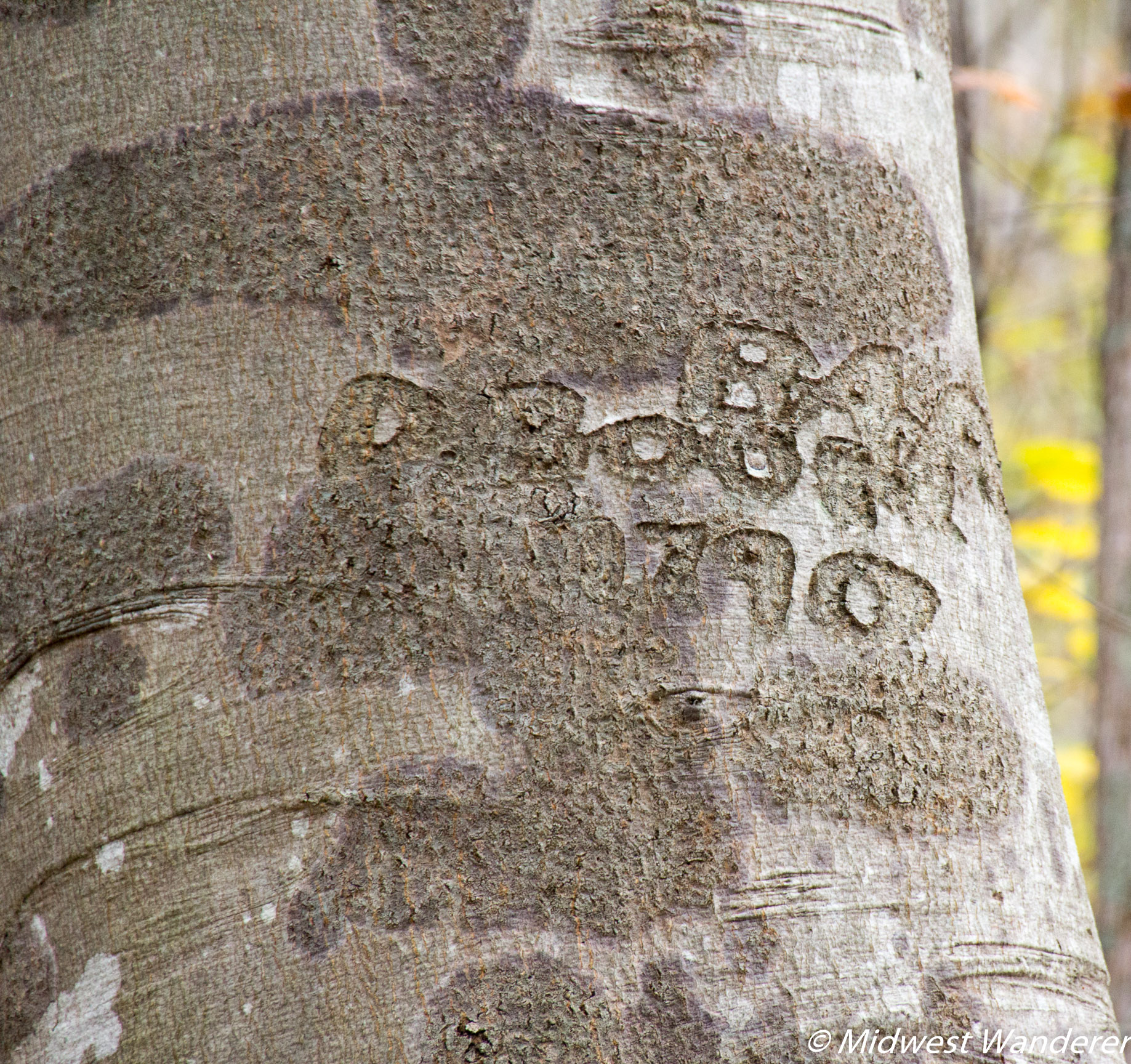 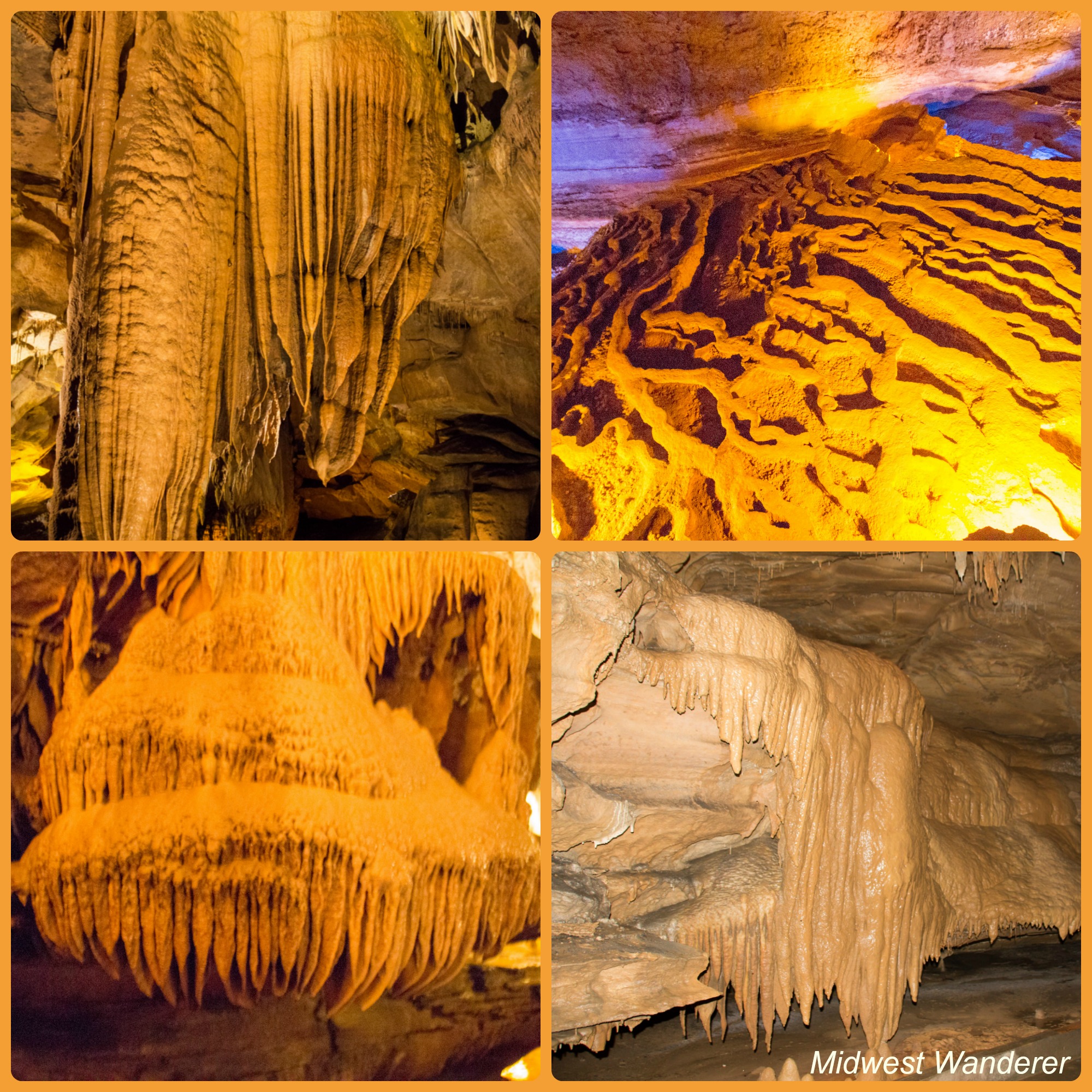 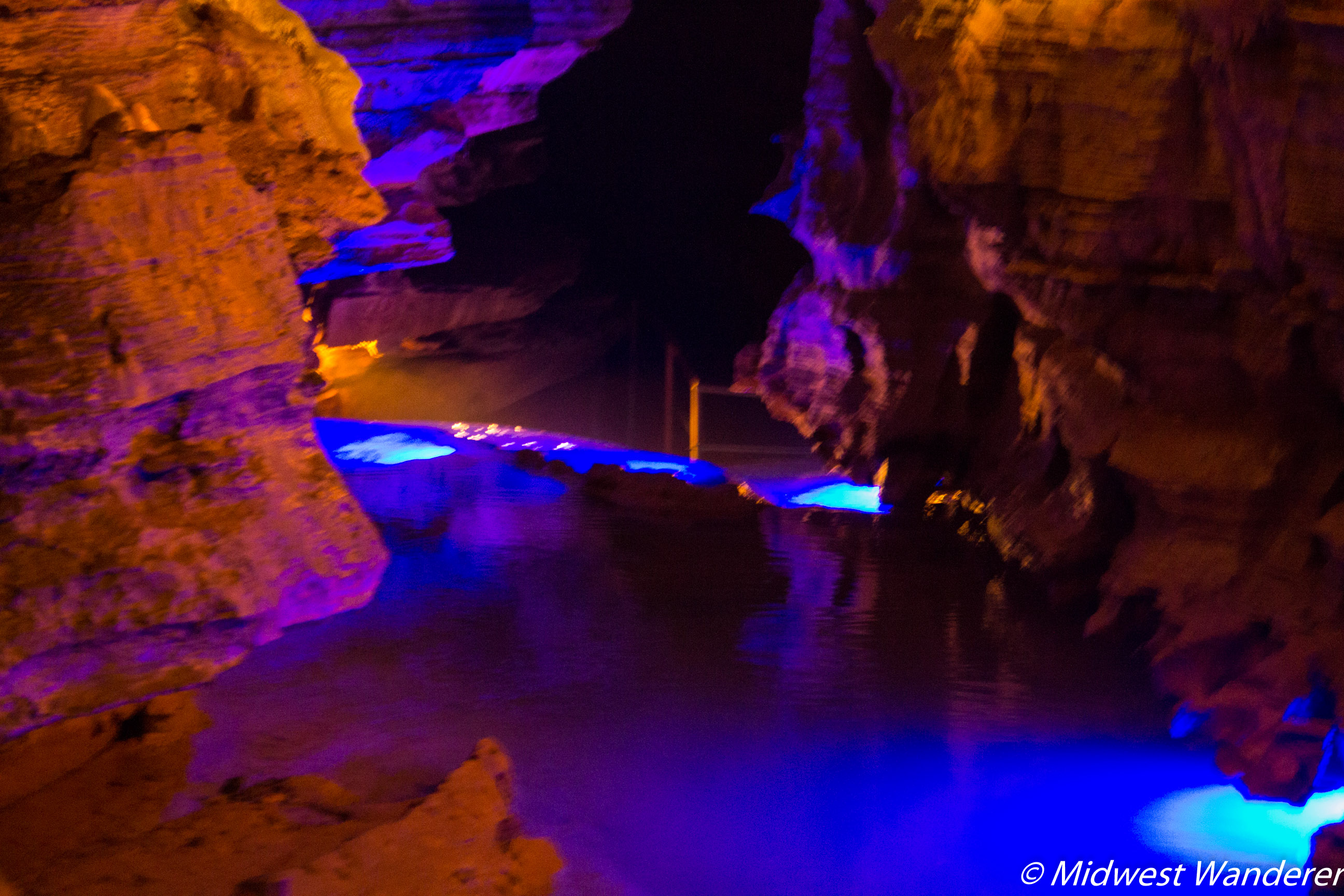 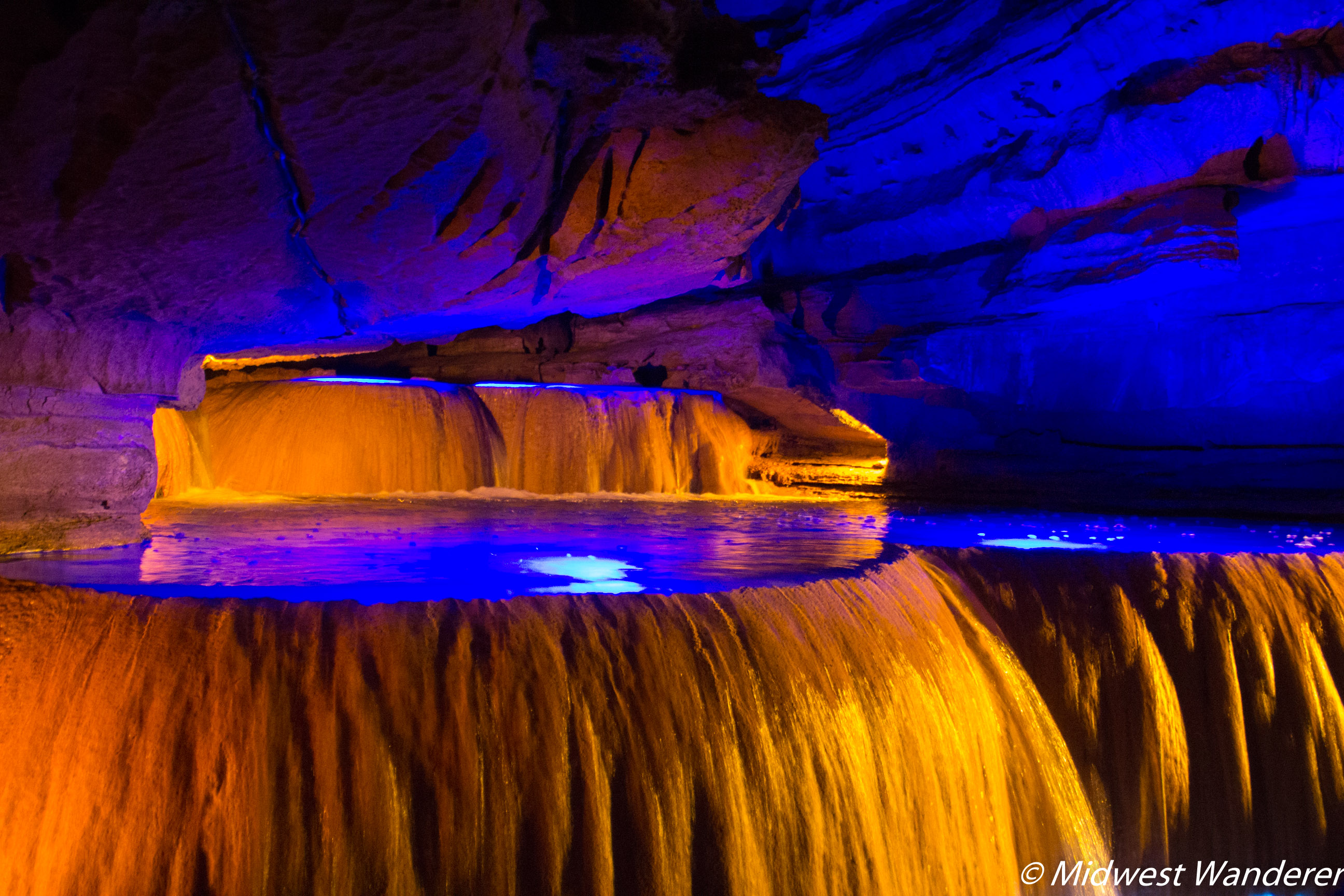 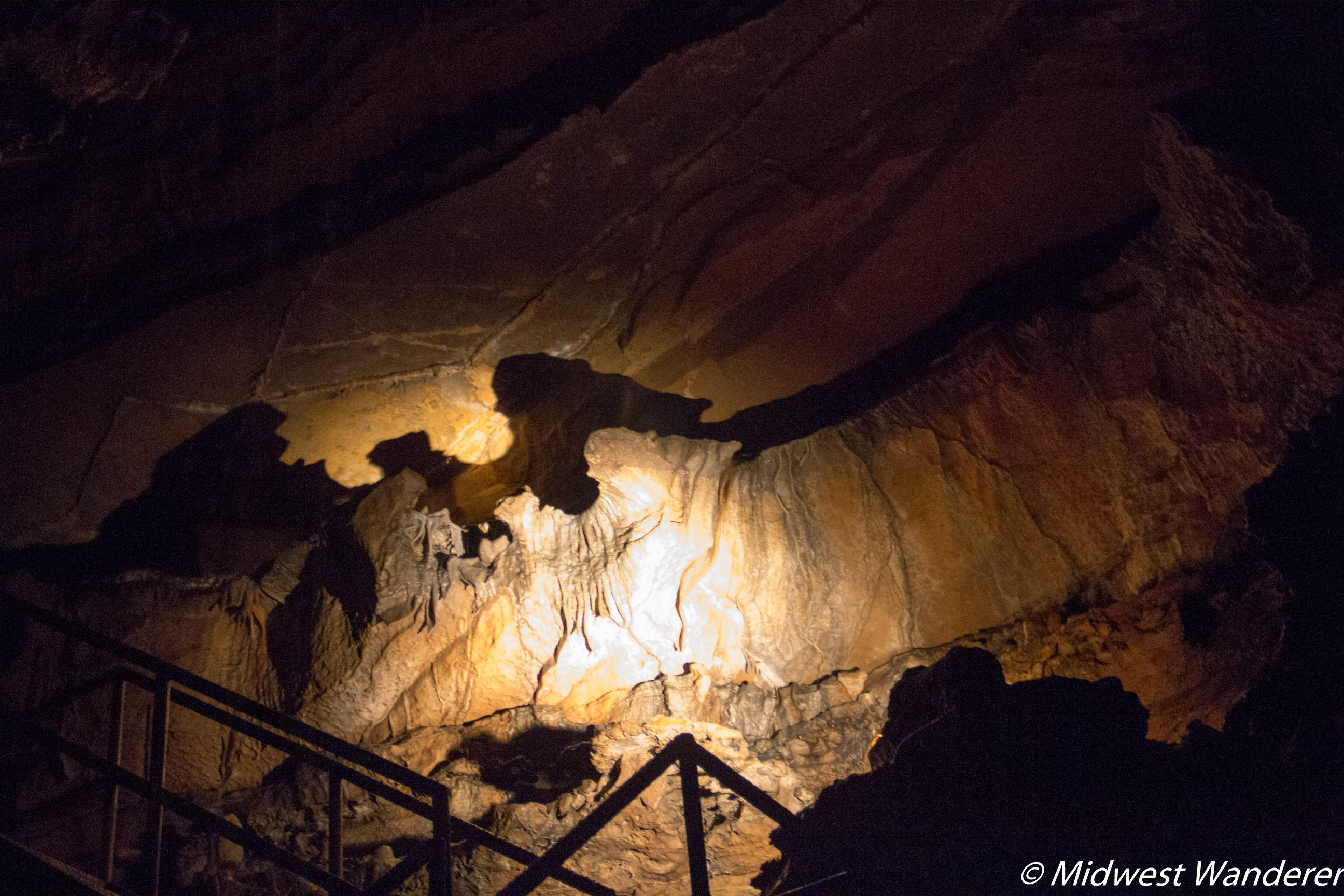 Real bats used to live in the cave, but the hole where they entered was sealed with a new entrance addition.

In the early 1970s, soon after Squire Boone Caverns opened for tours, two guides dug debris and silt out of the original cave opening, looking for inscriptions that Squire Boone had supposedly carved into the cave walls. They didn’t find the inscriptions. Instead, they found bones and rotted wood.

A retired doctor, and descendant of Squire Boone, authenticated the bones to be those of Squire Boone. One of the telltale signs was a hole in the skull from a tomahawk wound that Squire Boone had suffered. A tour guide built a new walnut casket. and the memorial was relocated to a drier place in the cavern, which is now part of the tour. 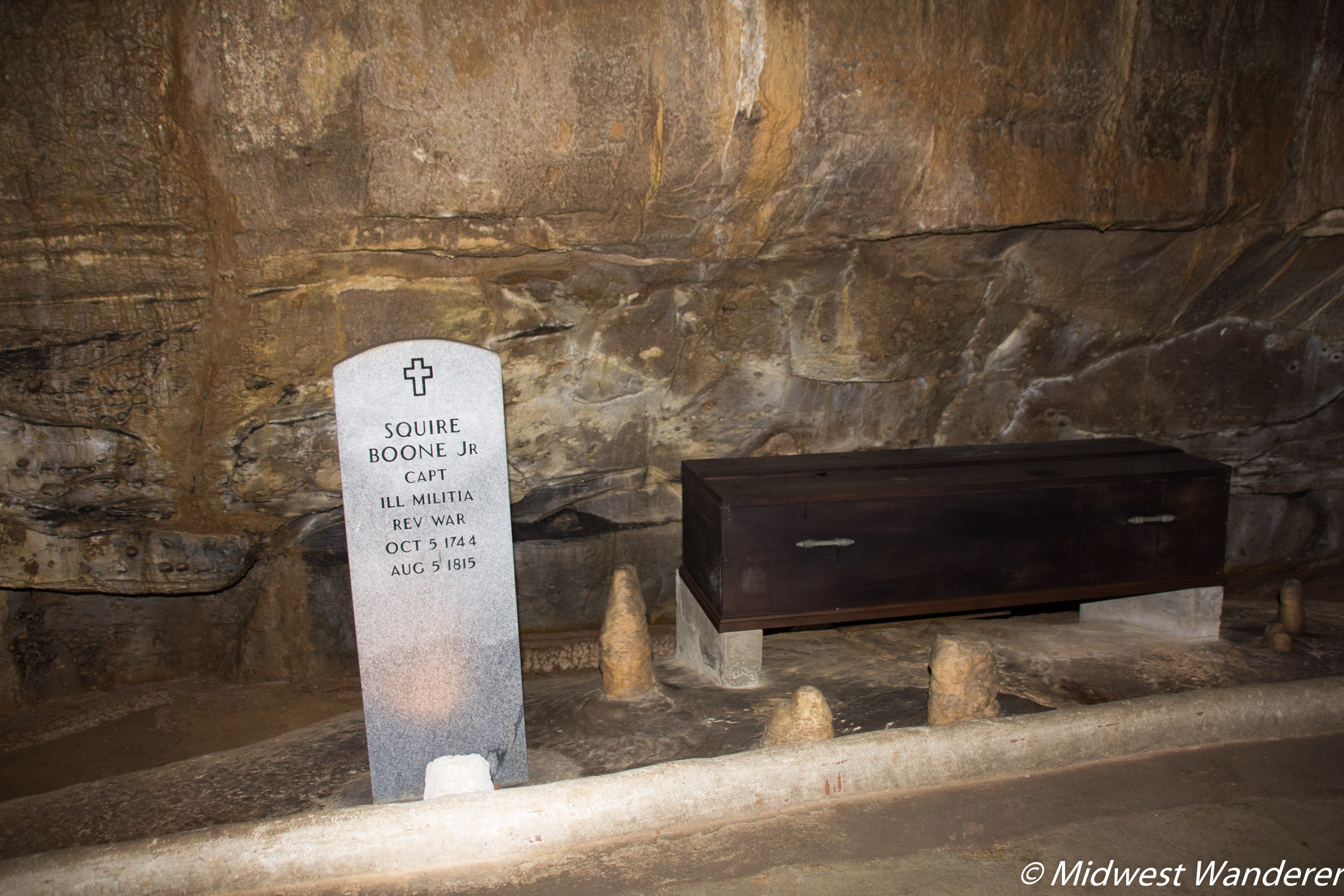 Outside the caverns, walk up to the original Squire Boone burial site at the original cave opening that Squire had jumped into when Native Americans were chasing him. He hid there until the Natives were gone. The cave saved his life and is one of the reasons he chose to return to the area at the end of his life.

Boone’s Mill and the Village

Squire Boone built a grist mill in the early 1800s, powered by water flowing from the caverns. During summer months, you can watch grain still being ground in the restored mill. Also inside the mill are original foundation stones into which Squire Boone carved verses. 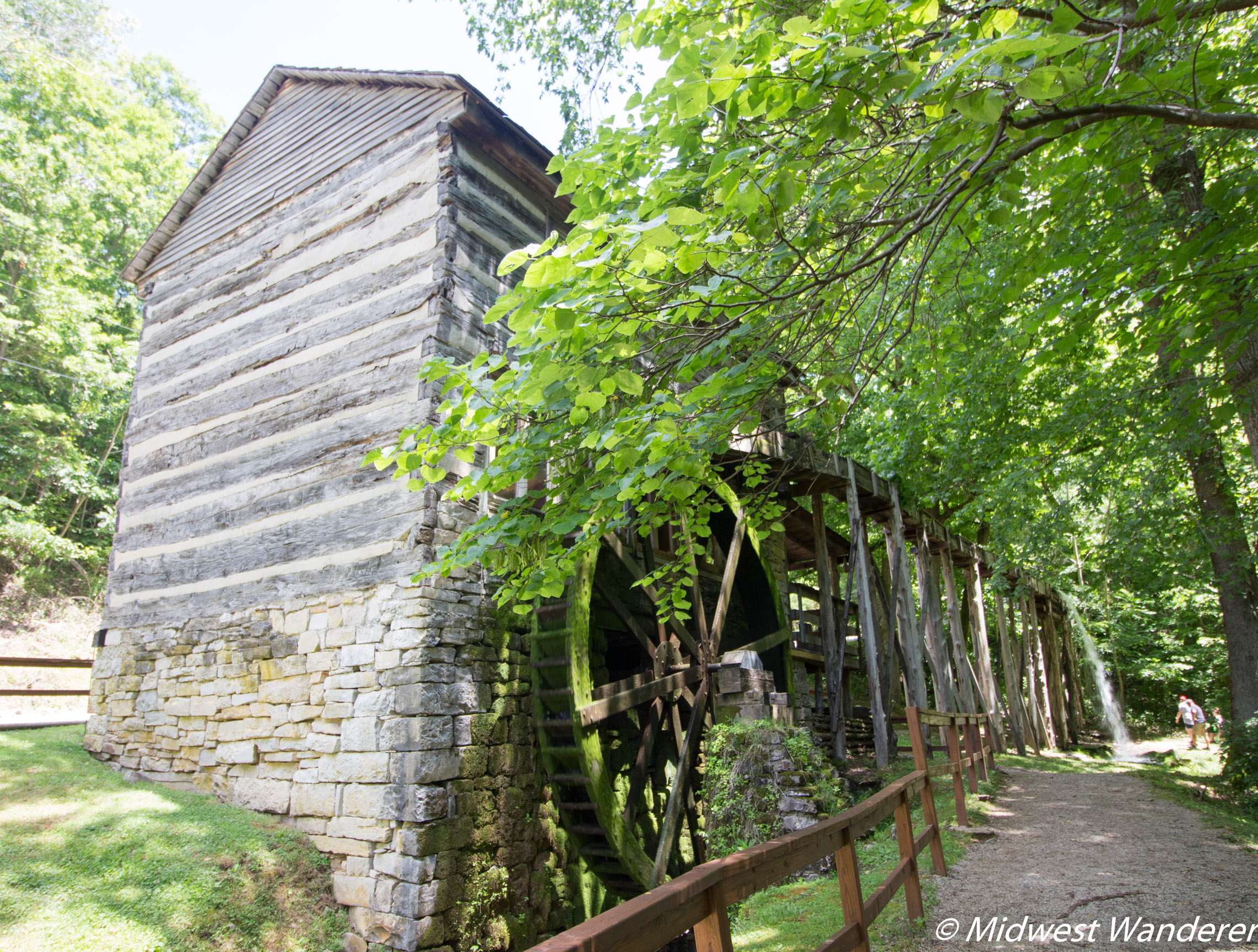 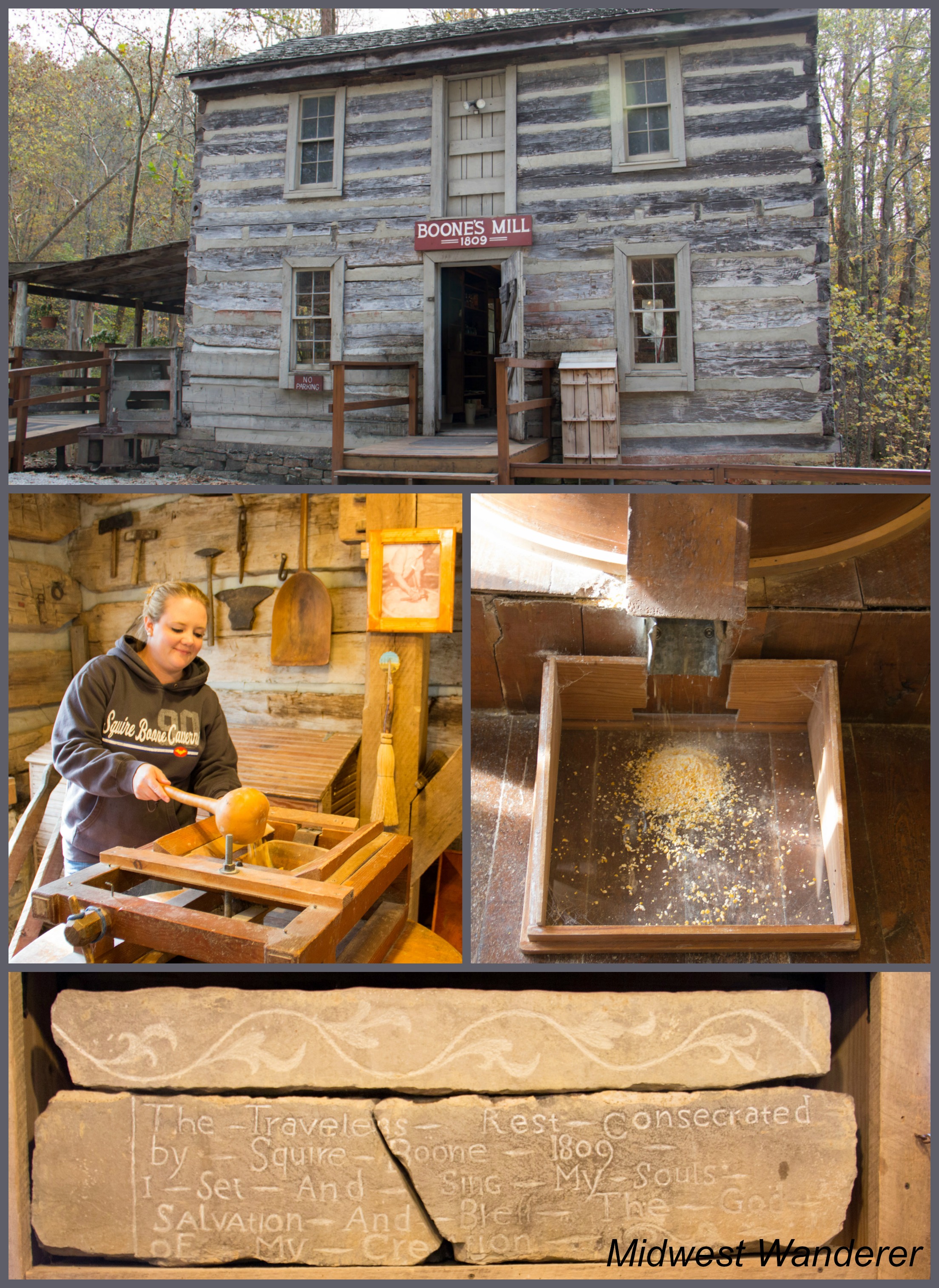 In the reconstructed village, watch as craftspeople make soap or candles. Pick up souvenir minerals and crystals in the Rock Shop, or stay for lunch in Boone’s Kitchen and Candy Shop. 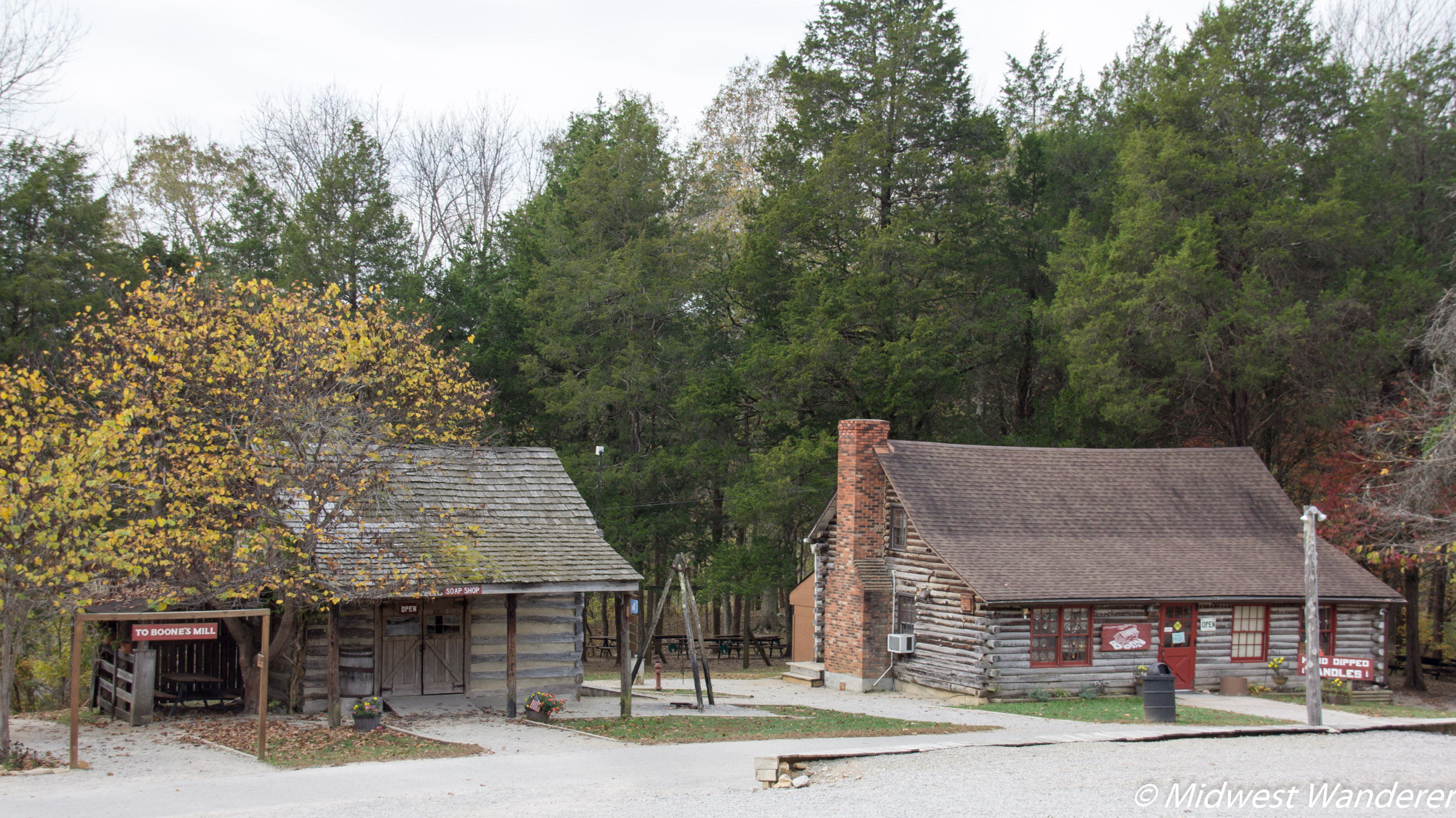 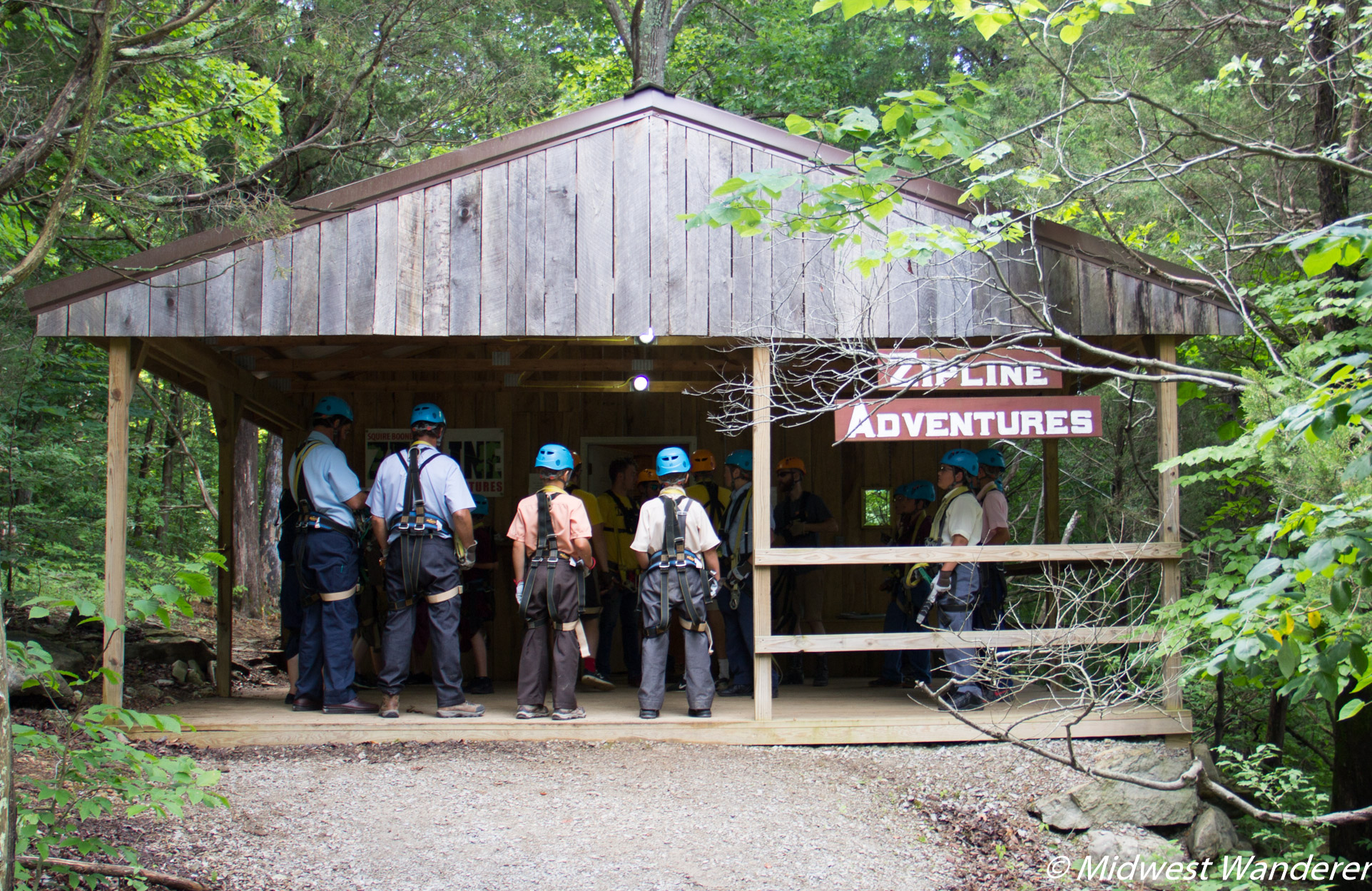 With all there is to see and do, you can spend an entire day at Boone Squire Caverns.

If you visit Boone Squire Caverns

Note: The cave tour requires walking down a spiral staircase and back up 73 steps.

Boone Squire Caverns, located at 100 Squire Boone Road in Mauckport, Indiana, is open year-round for tours, except Thanksgiving, Christmas Eve, Christmas, and New Year’s Day. Call ahead in inclement weather. The mill and village are open Memorial Day through Labor Day. Check the website for tour times and other details.

We stayed at the Kintner House Inn bed and breakfast during our visit to Historic Corydon and Harrison County.  Check rates here. 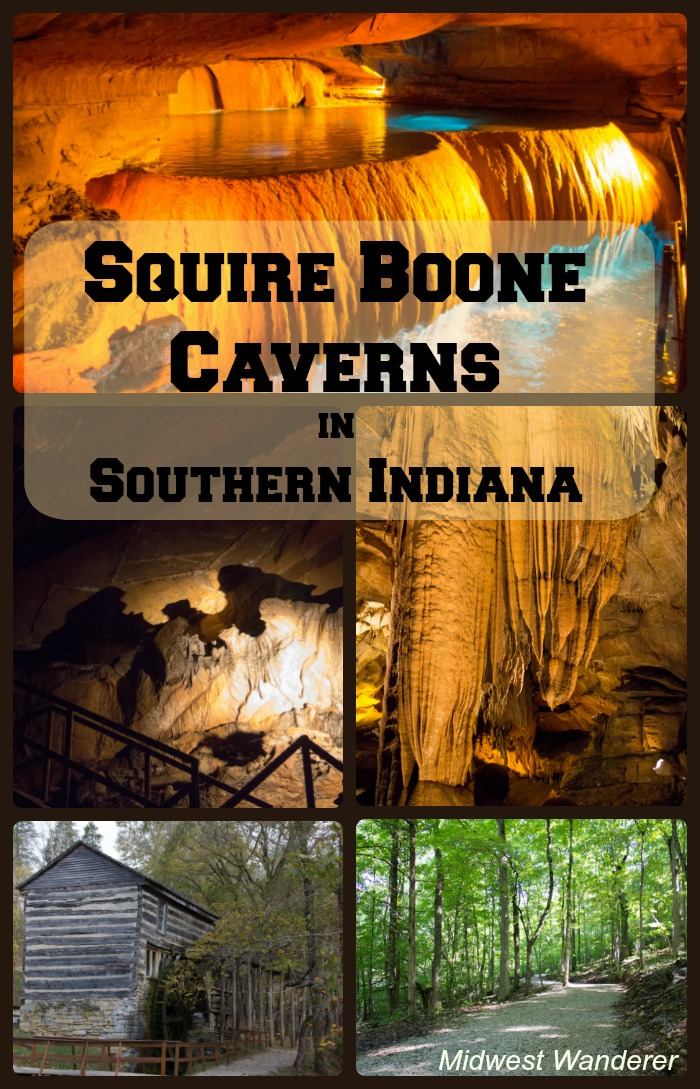 Disclosures: We toured Squire Boone Caverns as part of our road trip along the the Ohio River Scenic Byway. The Harrison County Convention and Visitors Bureau and Squire Boone Caverns hosted our visits. Our admission to the caverns and lunch at Boone’s Kitchen and Candy Shop was complimentary. However, any opinions expressed in this article are my own.
This article contains an affiliate link, which means if you book a room through the “Check rates here” link above, I will receive a small commission at no additional cost to you.

Howard Steamboat Museum in Jeffersonville, Indiana, pays tribute to the Howard family and their steamboat building company. The tour combines a history of the ornate Edmonds and Laura Howard mansion and the shipyard located across the street, which the Howard END_OF_DOCUMENT_TOKEN_TO_BE_REPLACED