African Americans settled in Georgetown as early as the 1820s. Georgetown, a neighborhood in Madison, Indiana, is located on the banks of the Ohio River. During the times of slavery, Indiana was a free state. Kentucky, across the river, was a slave state. Putting their own lives at risk, many Georgetown abolitionists helped slaves escape and travel north to freedom. They hid escaped slaves in their homes and other buildings as the slaves traveled the Underground Railroad route. During our visit to Madison, we took the self-guided Georgetown Walking Tour and saw some of the Georgetown buildings that still exist. 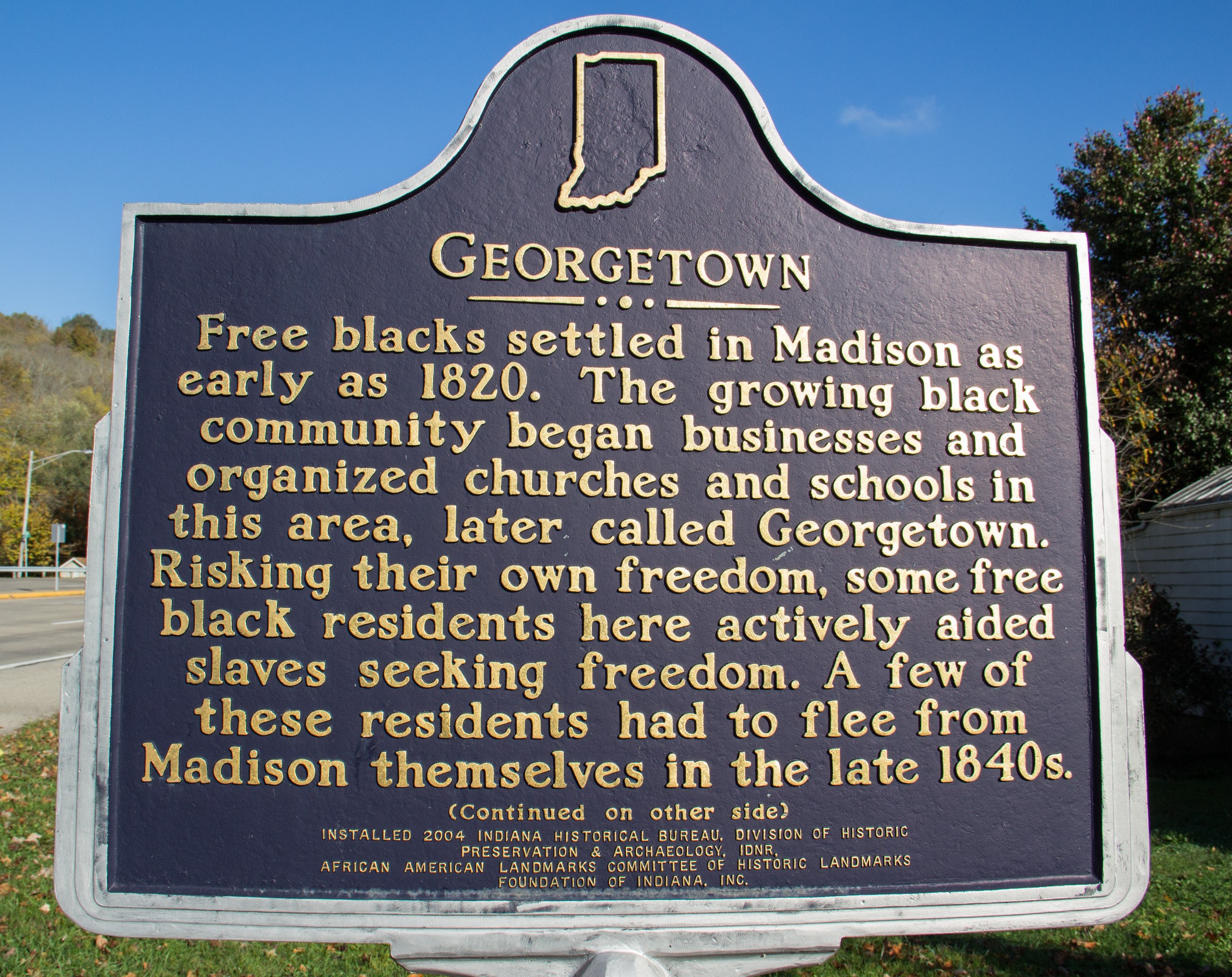 What was the Underground Railroad?

Neither a railroad and rarely underground, the Underground Railroad was a system of transporting escaped slaves to northern states and Canada. Just because a slave made it across the river to Indiana didn’t mean he was free. The National Fugitive Slave Law, passed in 1850, required officials from free states to assist in the capture of runaway slaves. However, citizens and governments of many free states ignored the law and assisted slaves in reaching safety. Abolitionists who helped slaves escape were called “conductors.” As escaped slaves traveled along the Underground Railroad route, conductors hid them in their  homes and other private buildings for temporary refuge. The buildings in which the slaves were hidden were called “stations.”

Over three decades, from the 1820s to 1850, Georgetown’s population grew from 48 families to 298 families. However, pro-slavery Madison residents constantly harassed African-American Georgetown residents. Because of the harassment, which at times erupted in violence, African-Americans began leaving Madison in the 1850s. Around the same time, German immigrants moved into the neighborhood.

If you take the Georgetown Walking Tour

You can pick up a guide for the Georgetown Walking Tour at the Madison Visitors Center at 601 W First Street. Check the web site for visitor center hours and other details.

Accommodations: We stayed at the Riverboat Inn and Suites during our visit to Madison. Check rates here

Disclosures: VisitMadison hosted our visit to the Madison area.  However, any opinions expressed in this article are my own.
This article contains an affiliate link, which means that if you book a hotel room through the “Check rates here” link above, I will receive a small commission, with no additional fee to you.

Before this summer, I knew little about Wild Bill Hickok. Then, within just a few weeks, we visited three places within Kansas and Illinois that all shared Hickok stories—quite a coincidence. I learned several fascinating facts about him. Here are END_OF_DOCUMENT_TOKEN_TO_BE_REPLACED