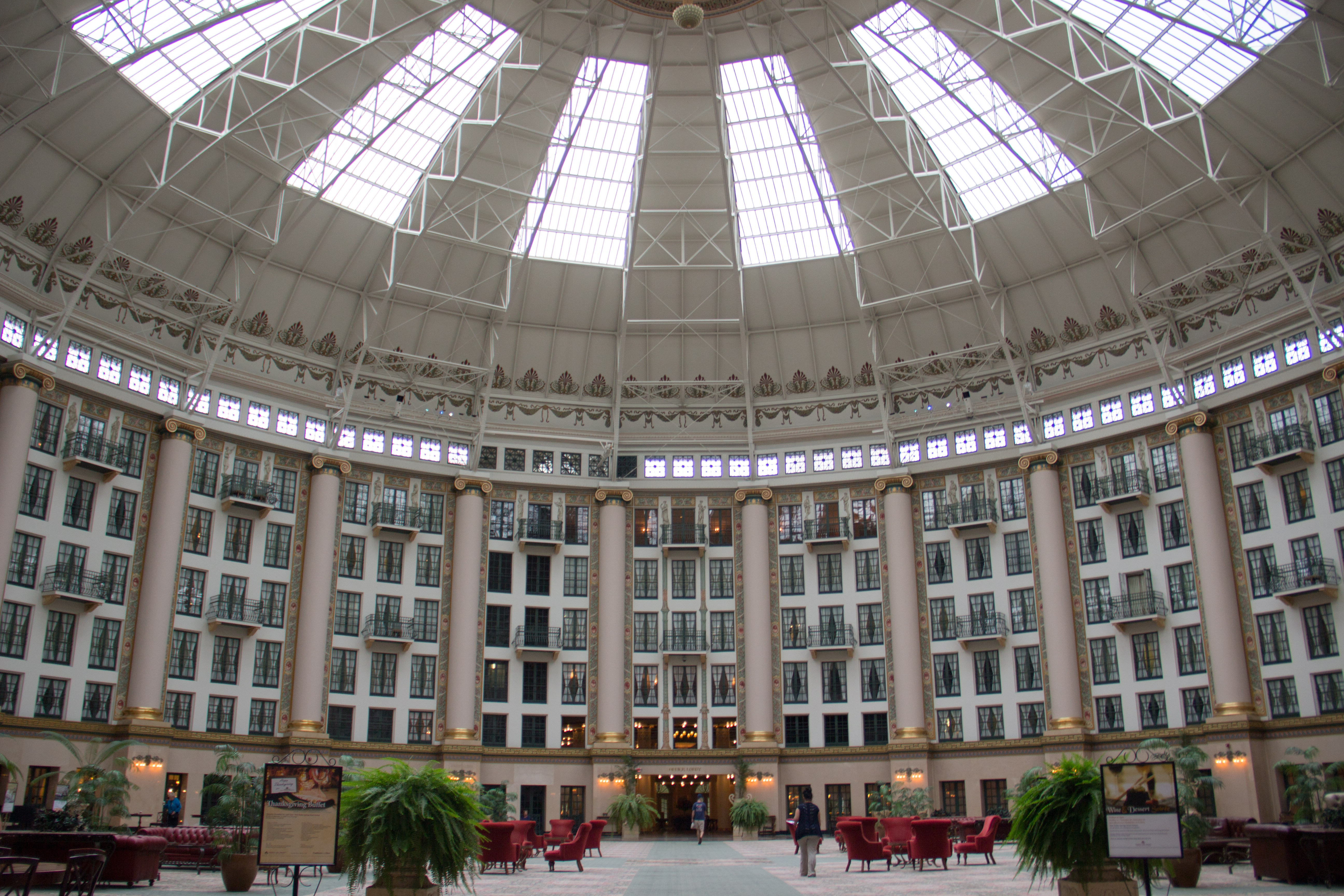 Dan, our guide, filled us in on the West Baden Springs Hotel history before we started our tour. A man named John Lane built the first guest house on the property in 1855. Lee W. Sinclair came as a guest and was so impressed with the medicinal waters that he bought the property. Sinclair made many improvements over the next thirteen years. Unfortunately, that hotel burned to the ground in 1901.

Just one year later the new, lavish West Baden Springs Hotel opened. The hotel did well until the Great Depression. Business declined then, and the hotel closed. In subsequent years, the Jesuit Order used the hotel as a seminary, and Northwood Institute used it as a college.

The hotel sat vacant for several years, and in 1991 a portion of the exterior wall collapsed. In stepped Indiana Landmarks, a historic preservation organization. Indiana Landmarks stabilized the hotel, and in 1994, the COOK Group, purchased the property. Headed by Bill and Gayle Cook and their son Carl, the COOK Group invested millions of dollars in restoring the hotel. 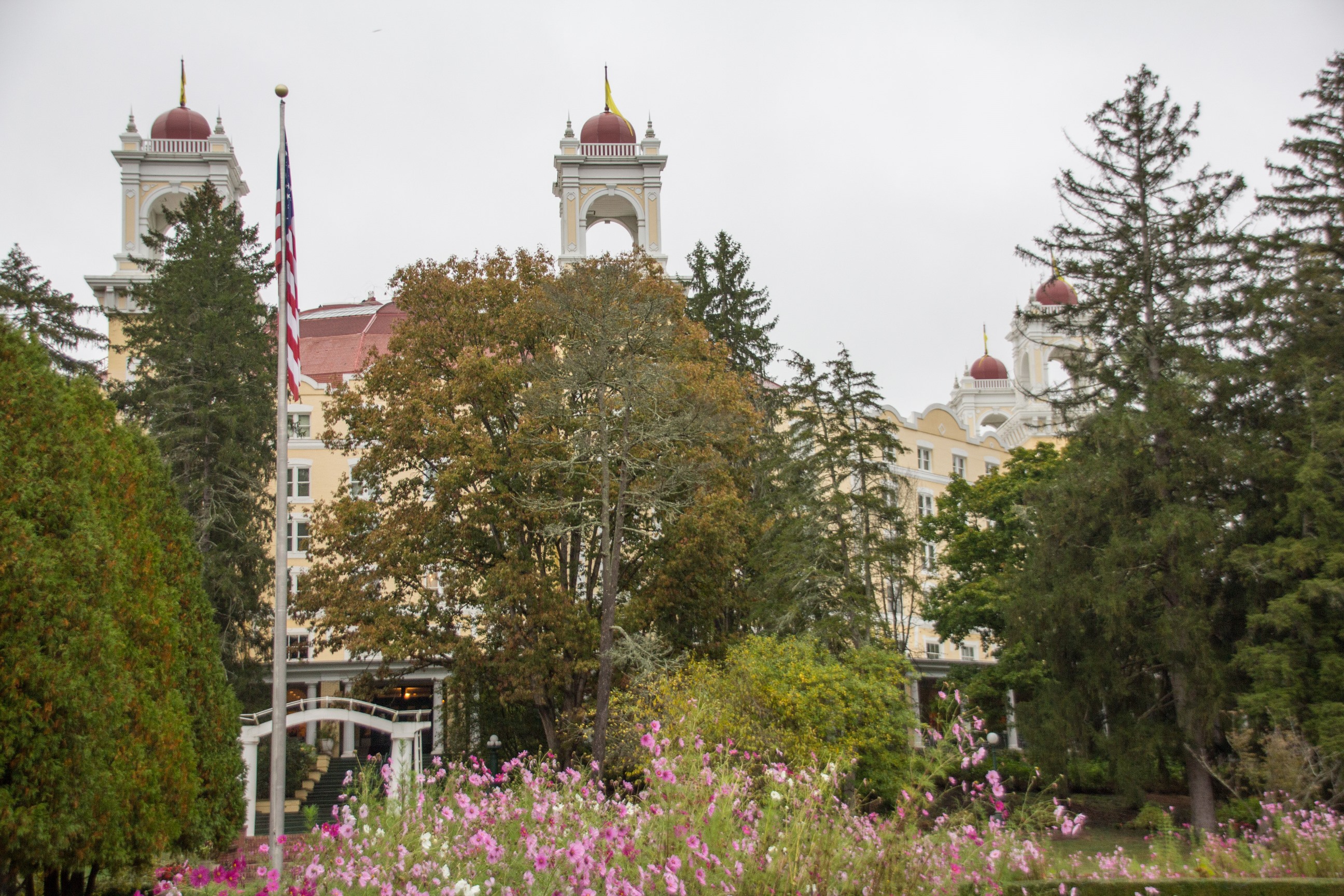 Our tour started in the gardens before we scurried onto the porch when it started to drizzle. But while we were in the garden, we learned more of the property’s history. At one time a hospital stood in the garden area, which eventually burned down. After the fire, Sinclair’s daughter Lillian, who had inherited the property, beautified the garden and made additional improvements to the hotel.

We went into the hotel through the original entrance that is no longer used by hotel guests because it requires climbing stairs. An ADA-compliant entrance has been added on what used to be the back side of the hotel.

The lobby has its own dome, albeit smaller than the dome in the atrium. 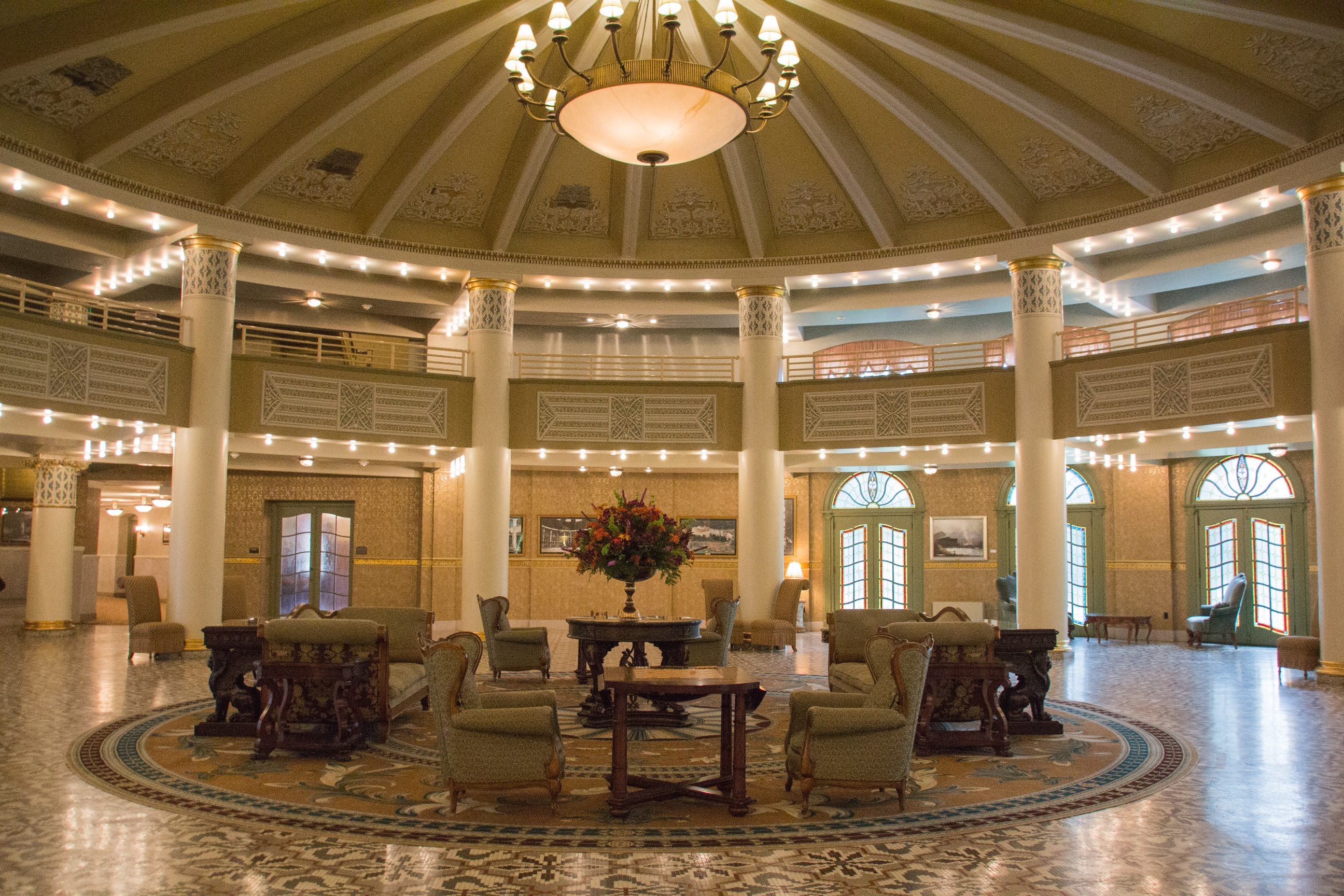 In the early 1900s, the ladies would gather on the lobby’s mezzanine. Just off the lobby was a gentlemen’s lounge. Single men would be brought into the lobby where they ladies would view them from the mezzanine. Later a lady might have tea with a gentleman who caught her eye.

When the Jusuits owned the building, they turned the lobby into a chapel and added the leaded glass.

From the lobby, we moved into the atrium. Dan explained that building the dome was quite a feat for the time. The atrium measures 600 feet in circumference, 200 feet in diameter, and 100 feet from floor to the disk that is attached to the dome. In building such a structure in the early 1900s, there would normally be several casualties. However, there was not one death or serious injury during the building of the entire six-story hotel. We also learned about the structure process and how it allows for natural expansion and contraction.

Also in the atrium is a Rookwood ceramic fireplace that could burn logs up to 14 feet long. Ceramic was the wrong material to use, as it acts as an insulator to the fireplace bricks. Bricks that get too hot can explode. Fortunately, the bricks behind the ceramic didn’t explode, but they did fracture. The bricks cannot be replaced without removing the ceramic, so today fires are not burned in the fireplace. It is just a showpiece. 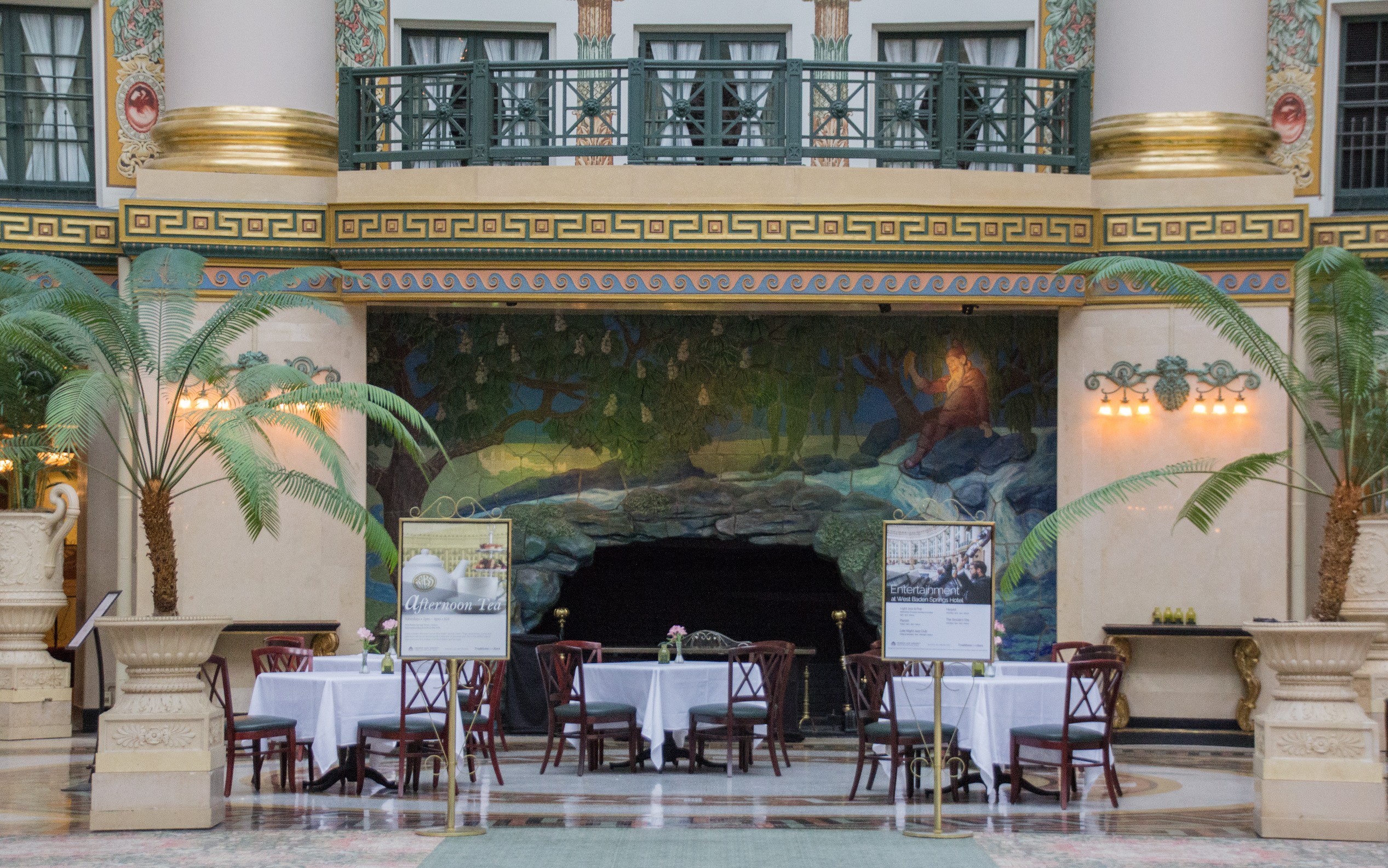 After the tour, Dan was kind enough to show my husband and me a few areas that aren’t part of the tour. Sinclair’s Restaurant is the fine dining restaurant in the West Baden Hotel. There are several casual dining options in the hotel, as well. 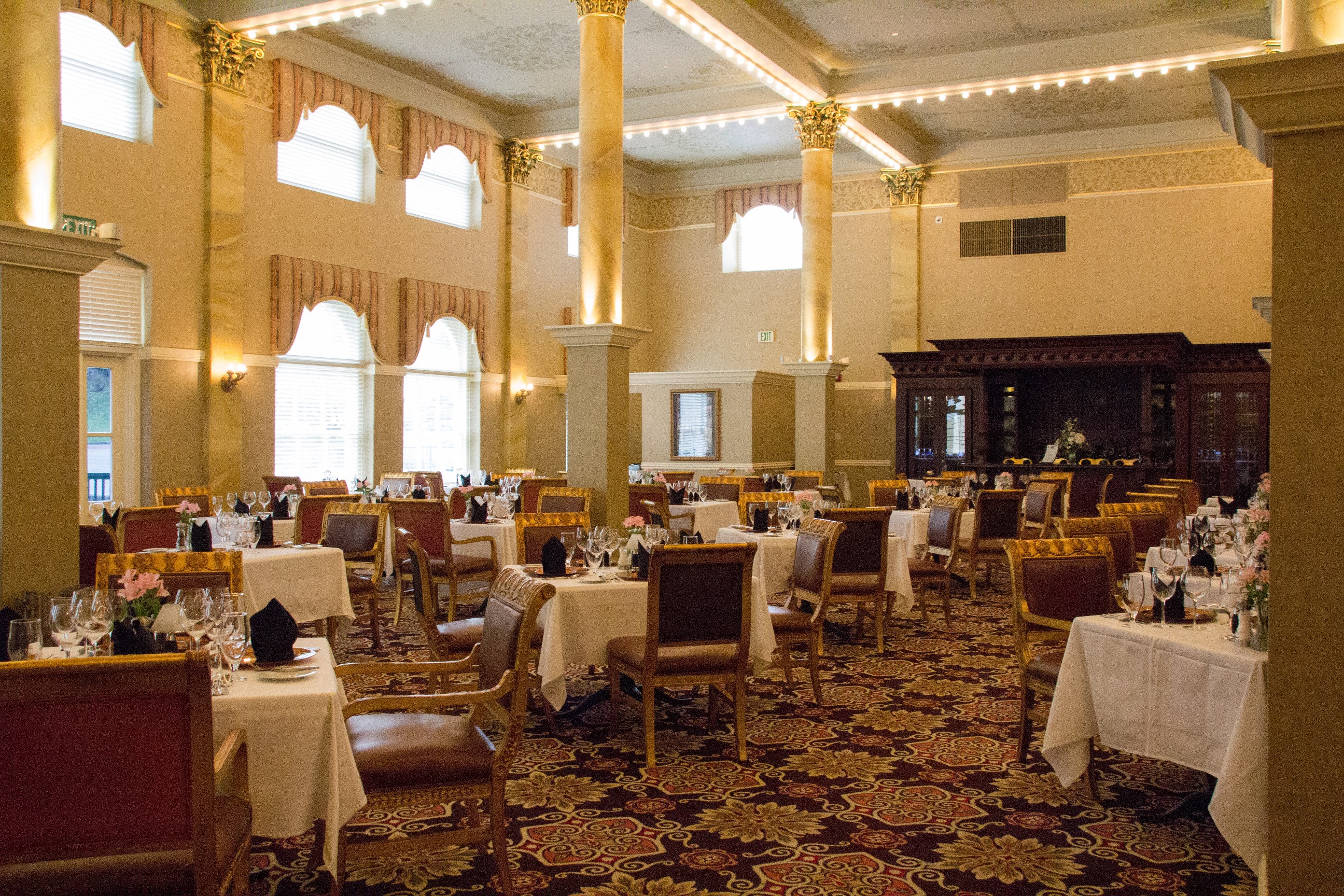 Our last stop was the West Baden Spa and the natatorium.

The indoor pool was the longest I’ve ever seen in a hotel. The pool is about a meter short of being Olympic size. 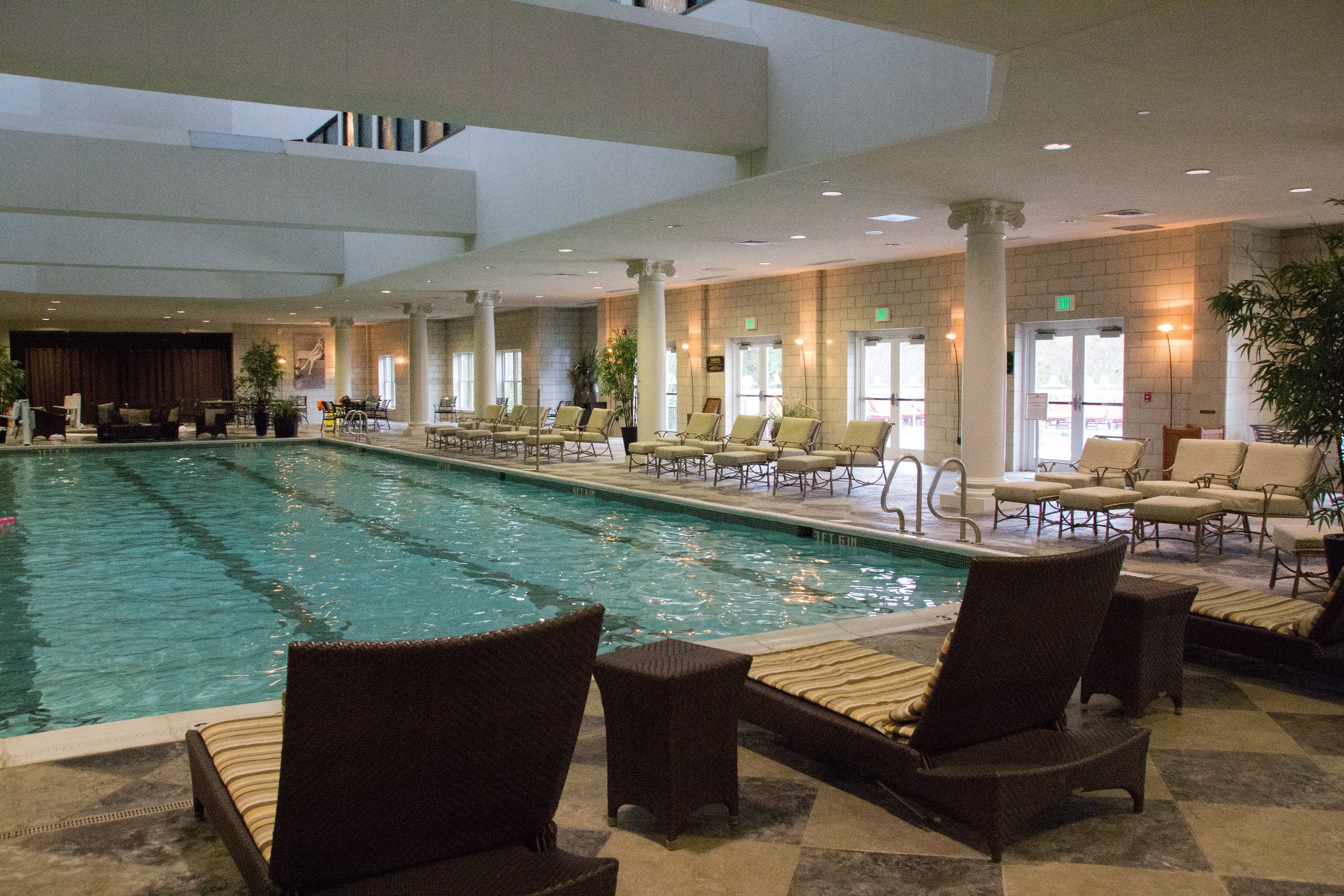 If you take the West Baden Springs Hotel tour 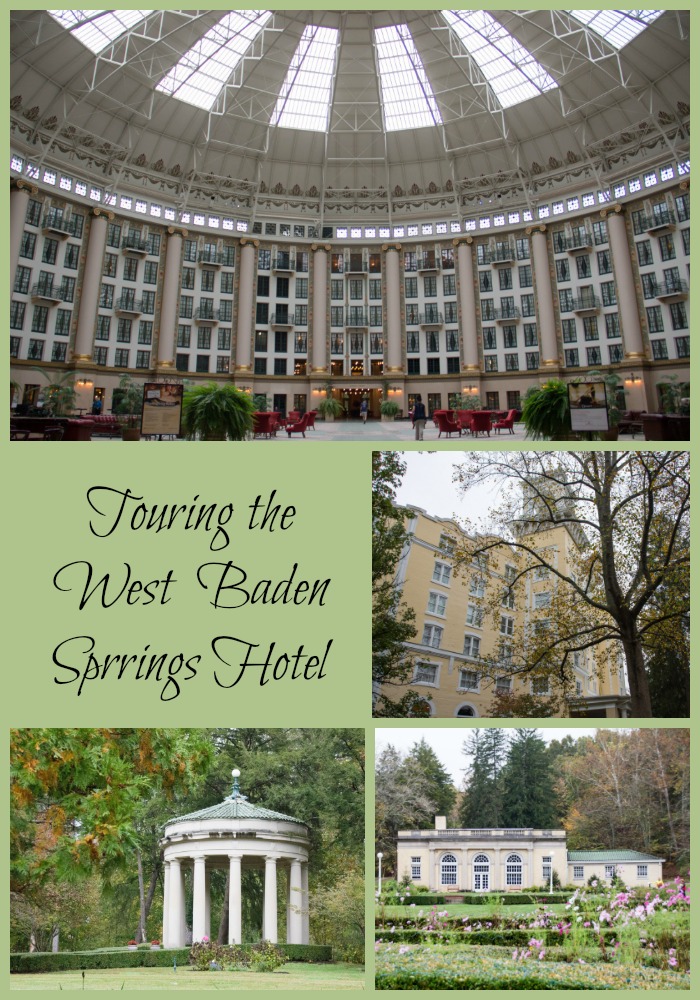 Disclosures: Visit French Lick West Baden hosted our visit to French Lick. Our West Baden Springs Hotel tour was complimentary. However, any opinions expressed in this article are my own.
This article contains an affiliate link. If you book at room through the “Check rates here” link above, I will receive a small commission, at no extra cost to you.

Thank you for reading Midwest Wanderer. Don’t miss a post. Simply enter your e-mail address below and click Subscribe, and we will notify you whenever I publish another post. Subscription is FREE. After subscribing, be sure to click the link when you get the e-mail asking you to confirm.   – Connie

Before this summer, I knew little about Wild Bill Hickok. Then, within just a few weeks, we visited three places within Kansas and Illinois that all shared Hickok stories—quite a coincidence. I learned several fascinating facts about him. Here are END_OF_DOCUMENT_TOKEN_TO_BE_REPLACED