I have been on a motorcycle exactly once in my entire lifetime—and that was as a passenger on a ride around the block. With that said, I still loved the Harley-Davidson Museum in Milwaukee, Wisconsin. Harley-Davidson is an American icon with a rich history, a history that unfolds as you navigate through the museum exhibits. 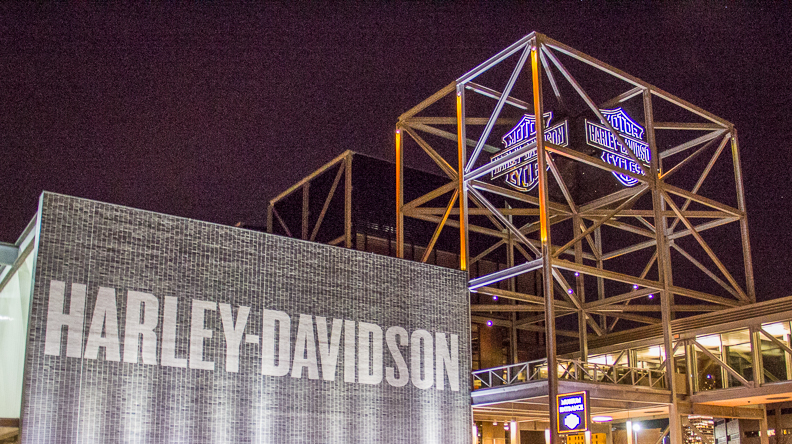 I opted for the audio tour (nominal additional fee), which gave more insight to the exhibits rather than just reading the placards.

The tour begins with the early history of Harley-Davidson. In 1901 William S. Harley designed a blueprint for an engine that would power a bicycle. He and his boyhood friend, Arthur Davidson, built their first motorcycle using this technology. By 1903, they began offering their motorcycles to the public. The Serial Number One motorcycle is one of the first exhibits in the museum. 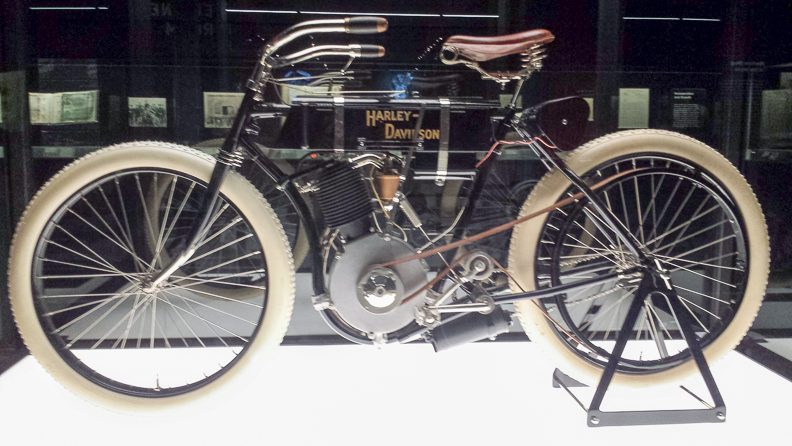 From the company’s inception, Harley-Davidson focused on quality. As early as 1906 a brochure for the Model 2 motorcycle stated, “We have not endeavored to see how cheap we could make it, but how good.” 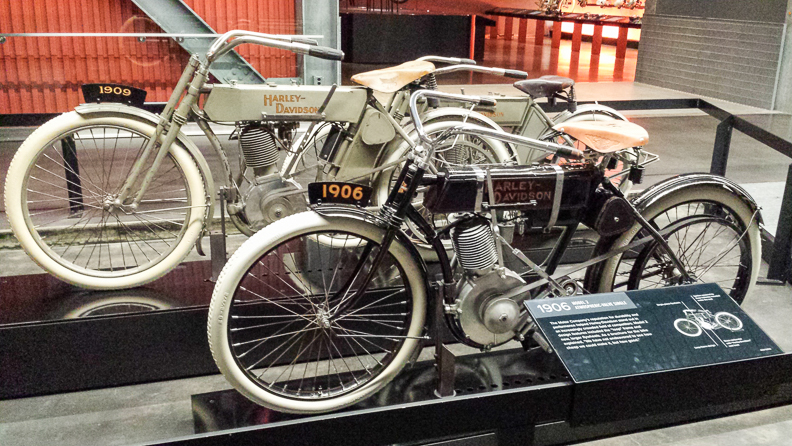 Did you know that Harley-Davidson made bicycles? Production didn’t last long, only from 1917 to 1922. They were painted olive green in support of American World War I troops. The bikes were targeted to young boys to foster an early Harley-Davidson loyalty.

Through the years the motorcycles transformed from a motor-powered bicycle to its own identity. 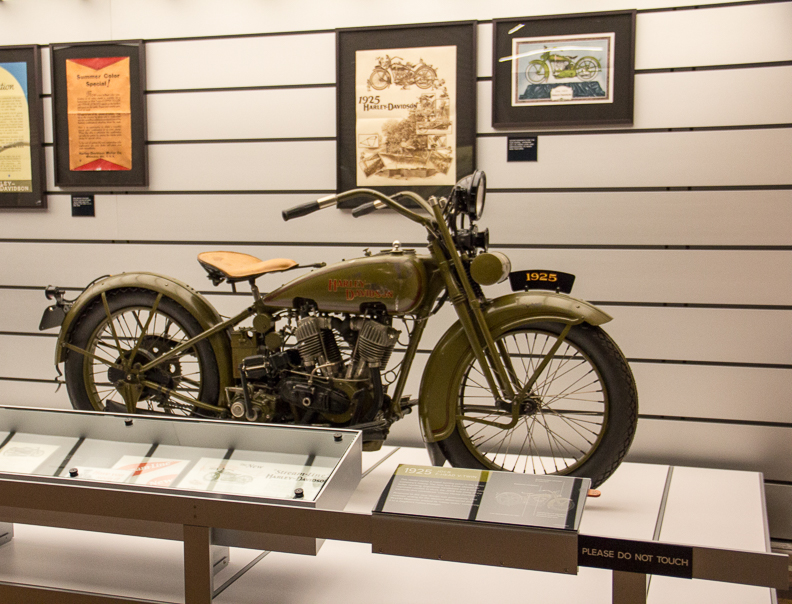 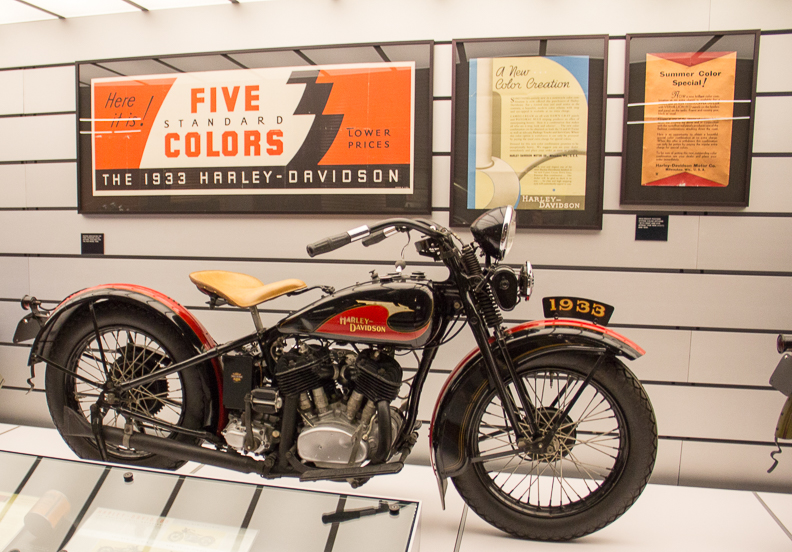 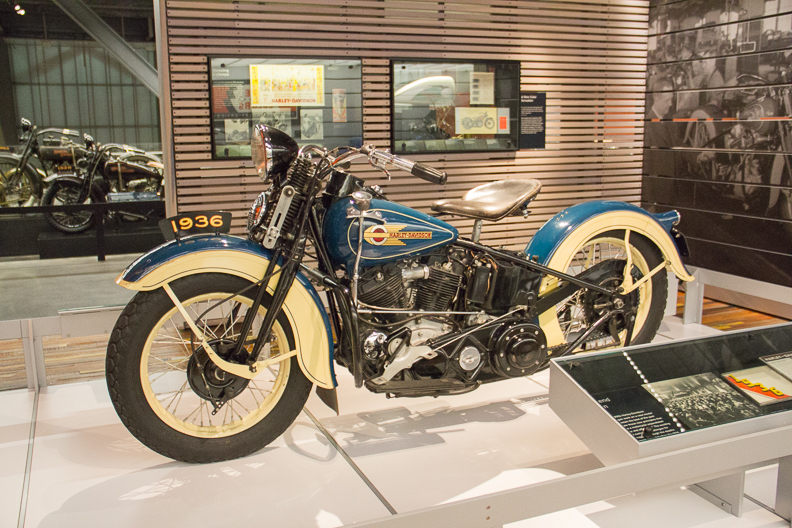 They were customized for government agencies, for use by the military, police departments, and the U.S. Postal Service. 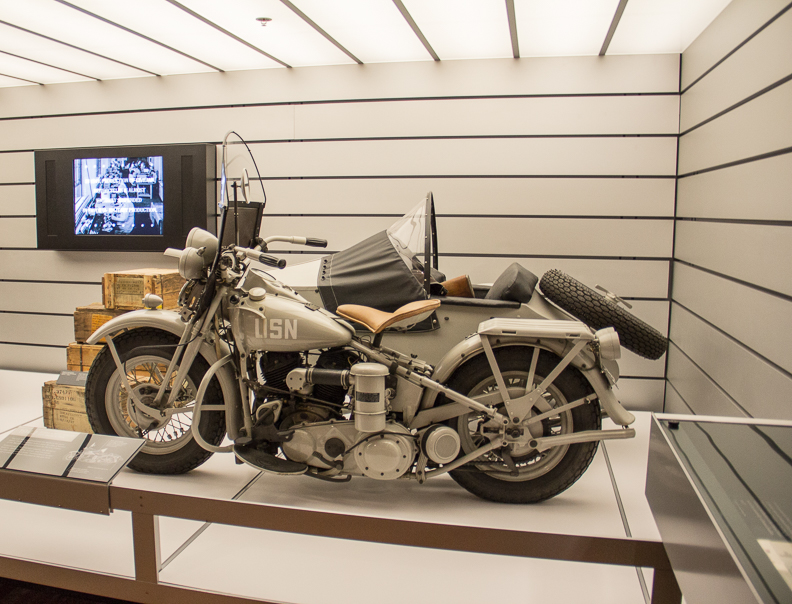 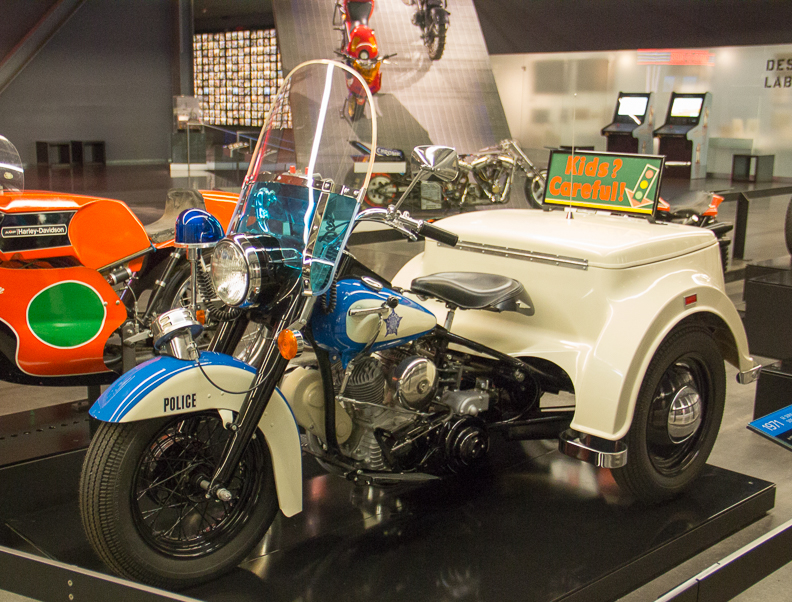 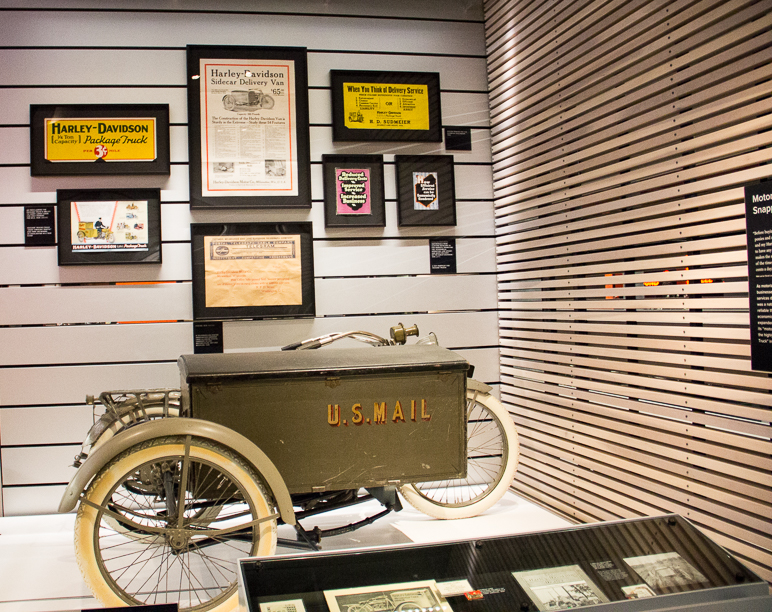 Elvis Presley, the “king” of rock ‘n’ roll, was a lifelong Harley-Davidson enthusiast. He was often photographed with the bikes, including one of his first, a 1956 KH.

A replica of the chopper ridden by Wyatt (Peter Fonda) in Easy Rider, was created by custom builder James Beck. 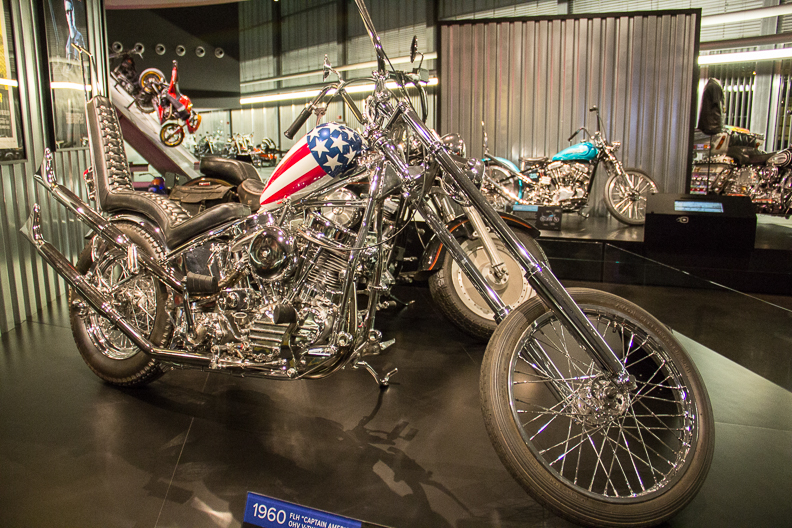 This one was a 2008 Harley-Davidson modified for the 2011 film Captain America, which was set in World War II. 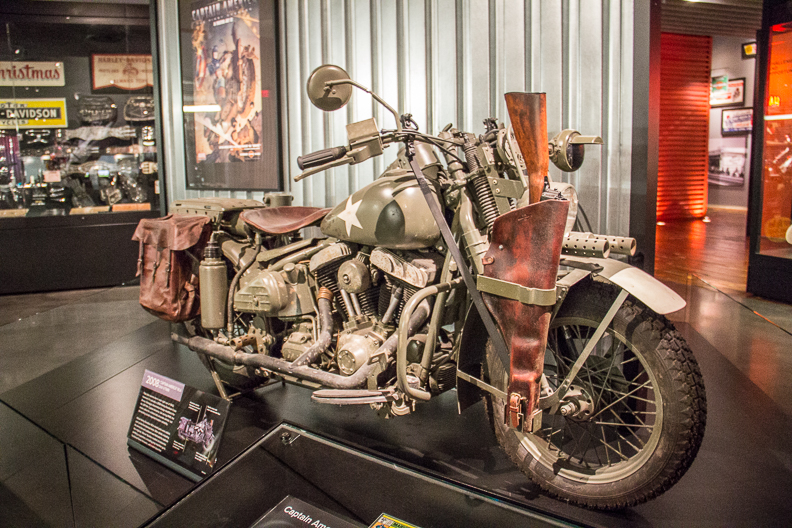 Customization is huge with Harley riders, and you’ll see lots of that in the museum, from the early days on. Enthusiasts will like getting into all the details. I just enjoyed oohing and aahing at the finished products. 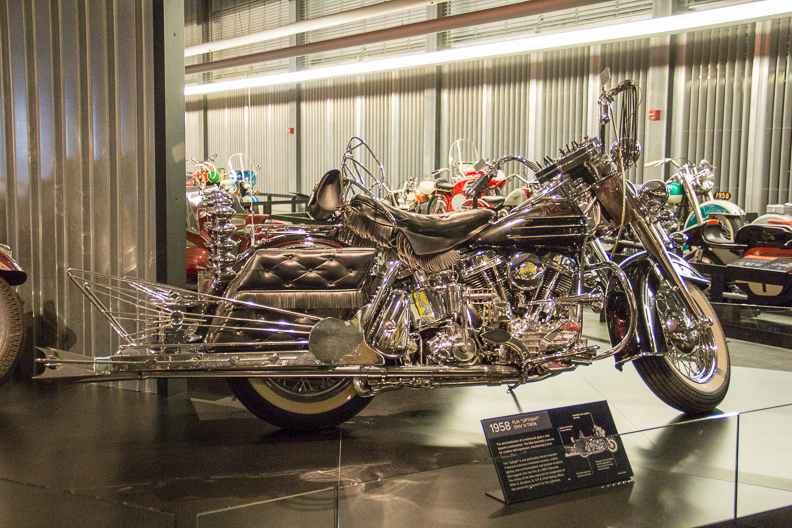 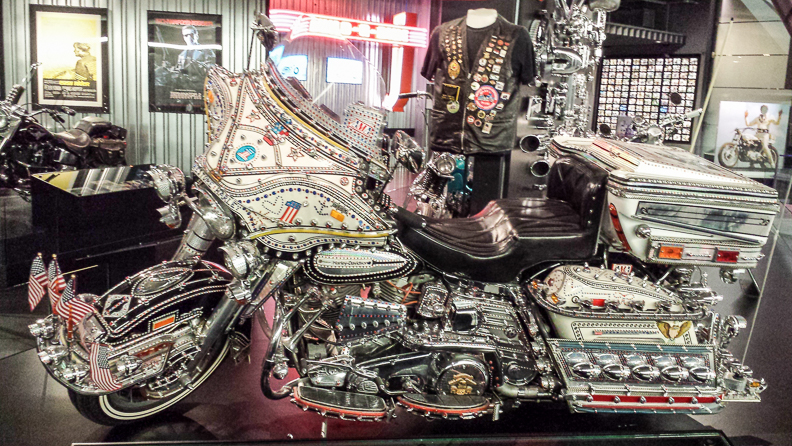 The fuel tanks themselves are an art form, especially when displayed in one large exhibit. 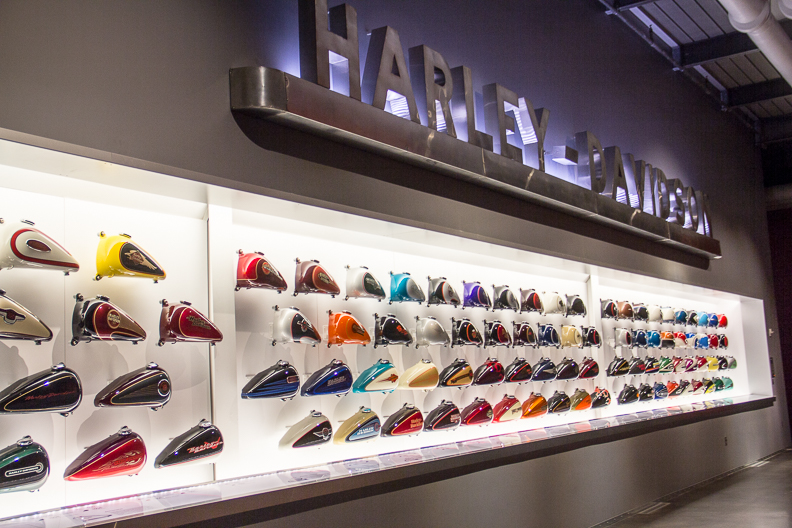 I’m a kid-at-heart, so my favorite part of the museum was climbing on a couple of photo ops. If I were to ride a motorcycle today, it would definitely be one of these three wheelers. 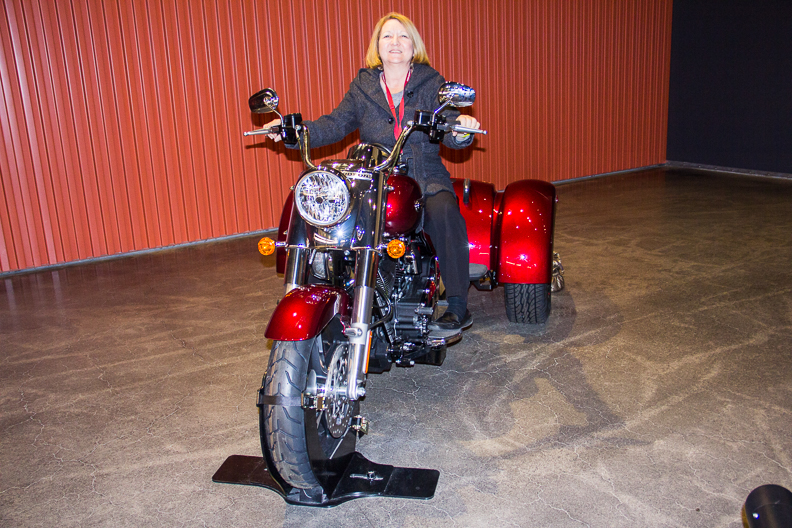 When visiting a museum, I like to take a peek in the museum store. Harley-Davidson enthusiasts would especially like The Shop, where you can buy everything from Harley-Davidson clothing to trinkets. 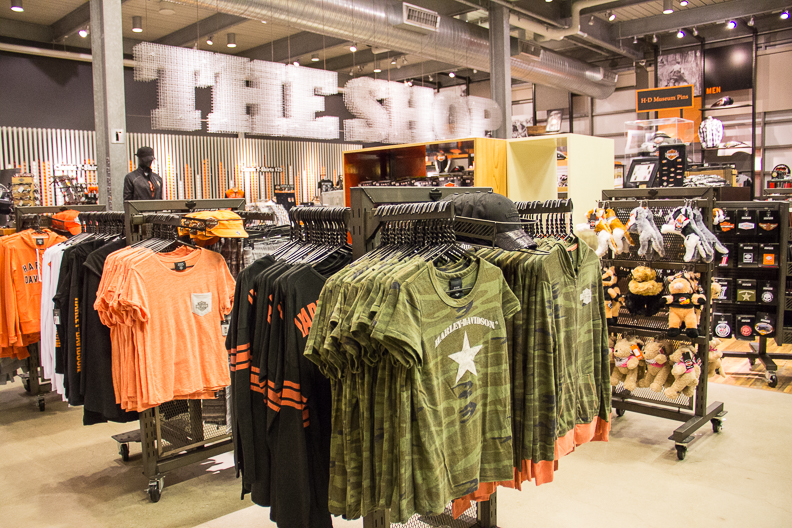 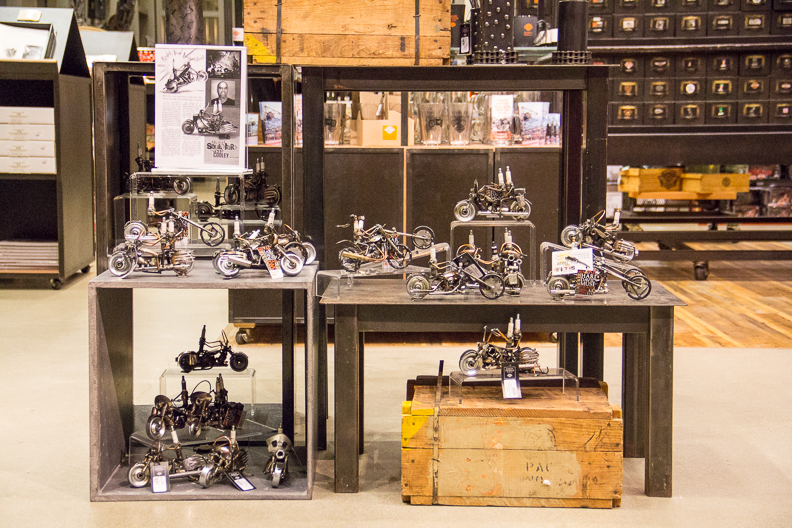 If you visit the Harley-Davidson Museum

Accommodations: We stayed at the historic Pfister Hotel during our visit to Milwaukee. Find the best deal, compare prices, and read what other travelers have to say at TripAdvisor

Before this summer, I knew little about Wild Bill Hickok. Then, within just a few weeks, we visited three places within Kansas and Illinois that all shared Hickok stories—quite a coincidence. I learned several fascinating facts about him. Here are END_OF_DOCUMENT_TOKEN_TO_BE_REPLACED