Driving north to Hoover Dam from Arizona via US 93, I noticed people walking alongside the Mike O’Callaghan – Pat Tillman Memorial Bridge, a concrete barrier separating freeway traffic from the pedestrians. A few minutes later, I was among those people on the bridge, getting an awesome view of Hoover Dam and the Colorado River. 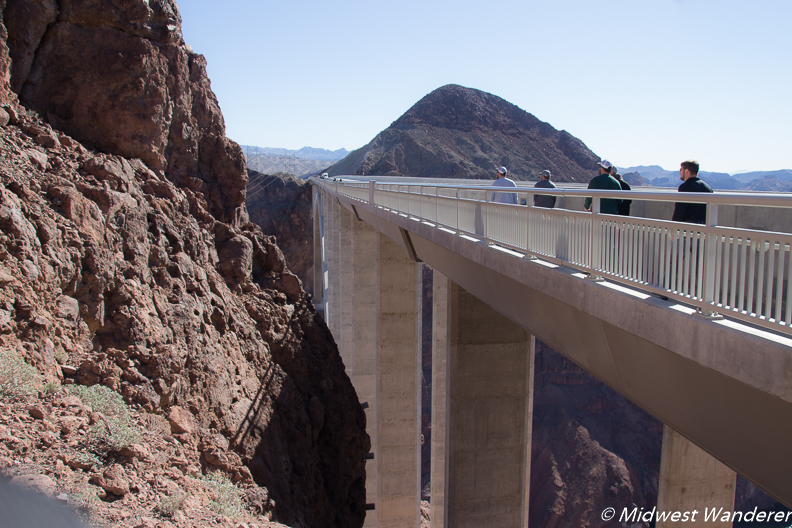 The Mike O’Callaghan – Pat Tillman Memorial Bridge, the second highest bridge in the United States, is an attraction in itself. From the bridge you have a perfect head-on view of the dam, and the water both in front of the dam and behind it. 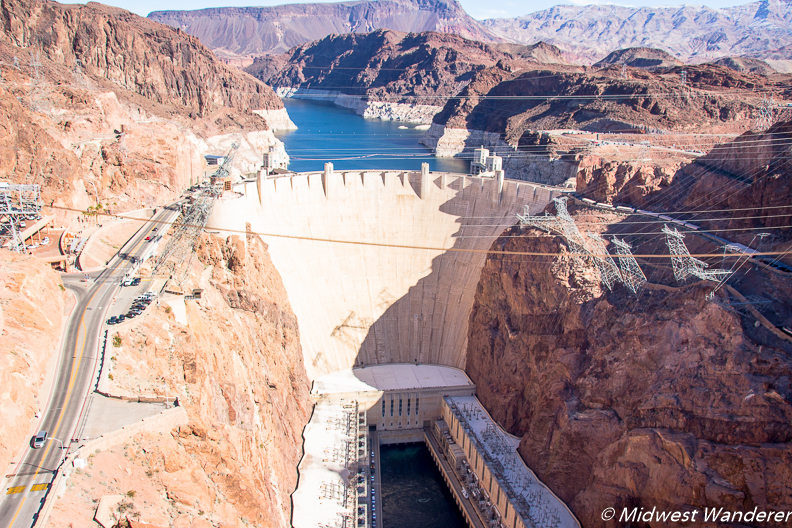 Besides viewing Hoover Dam from the bridge, I had to make it a point to walk the entire 1,900-foot span. 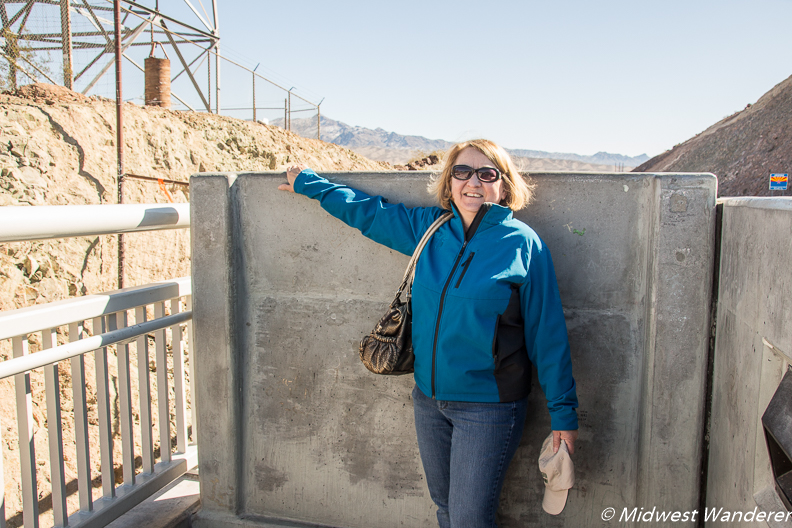 Inside the Hoover Dam Power Plant

Two Hoover Dam tours are available: the Powerplant Tour and the longer, more detailed Dam Tour. My husband and I opted for the half-hour Powerplant Tour, which begins with a ten-minute video presentation about the building of the dam, and is filled with impressive facts. Here are a few:

On the next part of the tour we went down 530 feet in an elevator, through a tunnel  to the penstock viewing platform. 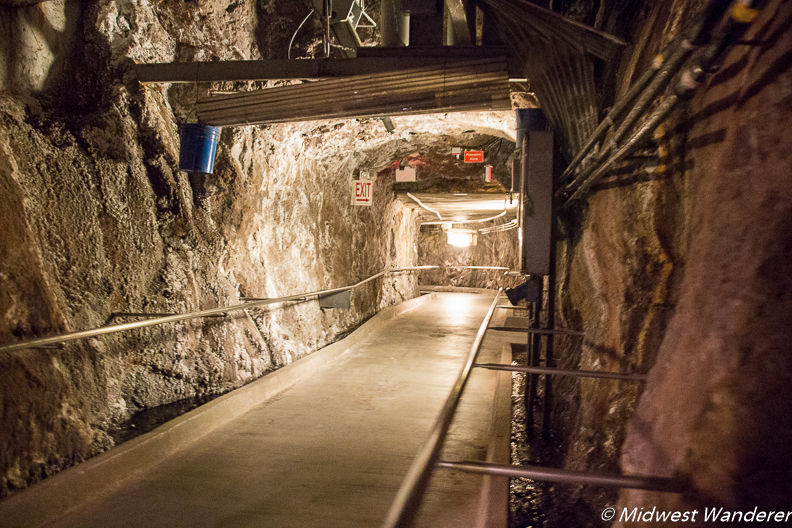 Our guide used a diagram to illustrate how water from Lake Mead (the lake created by building the dam) fills intake towers and then flows through penstock pipes. We could see one of the pipes through a window in the room. Water can flow through the pipes at 30-foot penstock pipes to the hydroelectric generators at the rate of up to 96,000 gallons per second, enough water to fill an Olympic size swimming pool in about seven seconds. 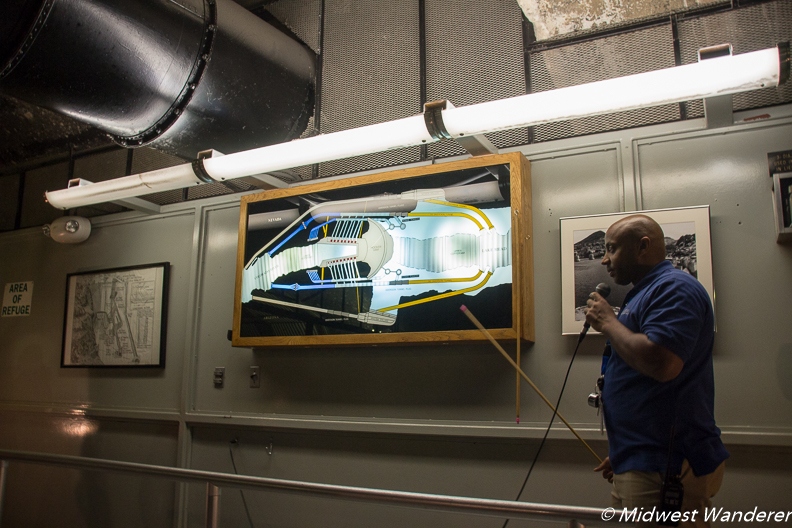 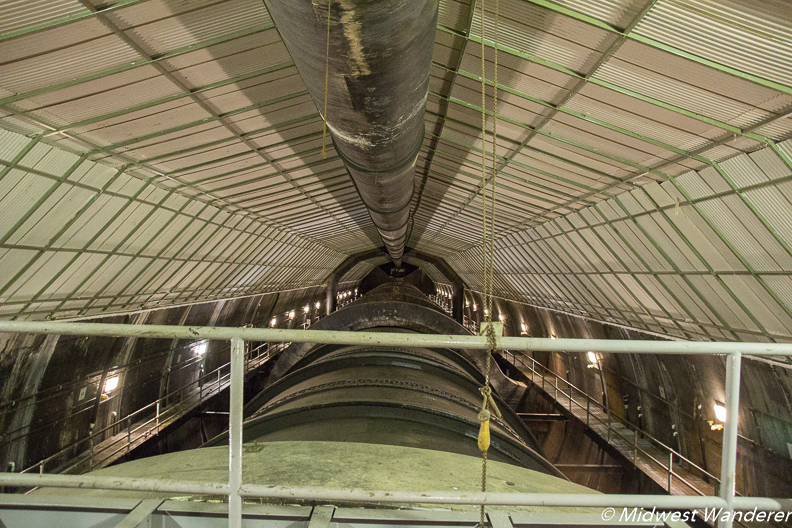 We then went to the power plant, where we could see the top third of eight generators that are on the Nevada side of the river. There are nine additional generators on the Arizona side. Hoover Dam produces almost 4.5 billion kilowatt hours of electricity each year. That’s enough power to serve nearly eight million people in Arizona, southern Nevada and southern California. 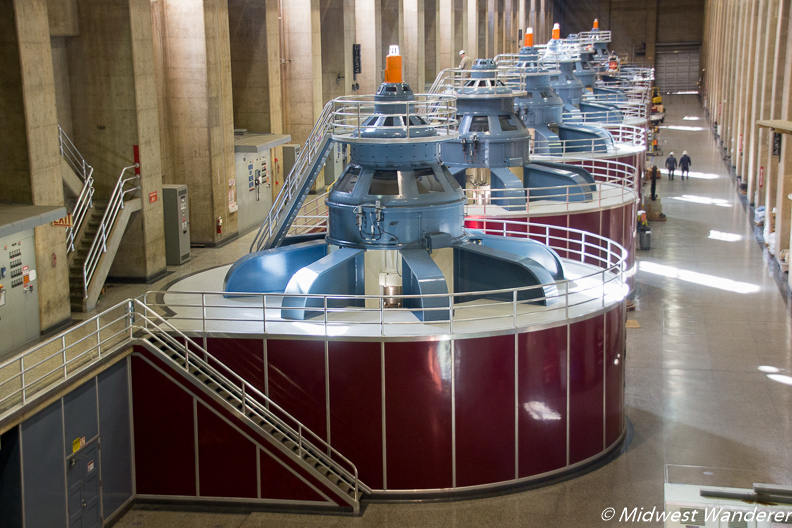 The tour ends at the visitor center, which includes interactive exhibits demonstrating the building and the function of Hoover Dam. Upstairs from the visitor center is an observation deck, from which you get a close-up look at the dam and also view the Mike O’Callaghan – Pat Tillman Memorial Bridge. Although you can stay inside, you get a better view from the outdoor portion of the observation area. 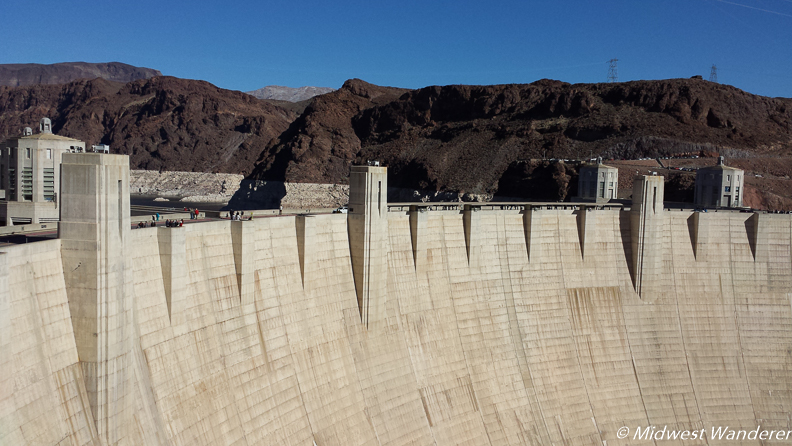 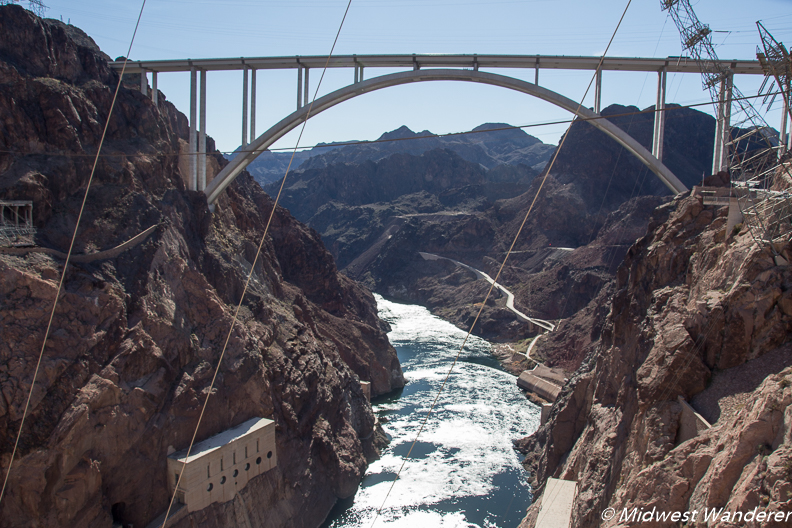 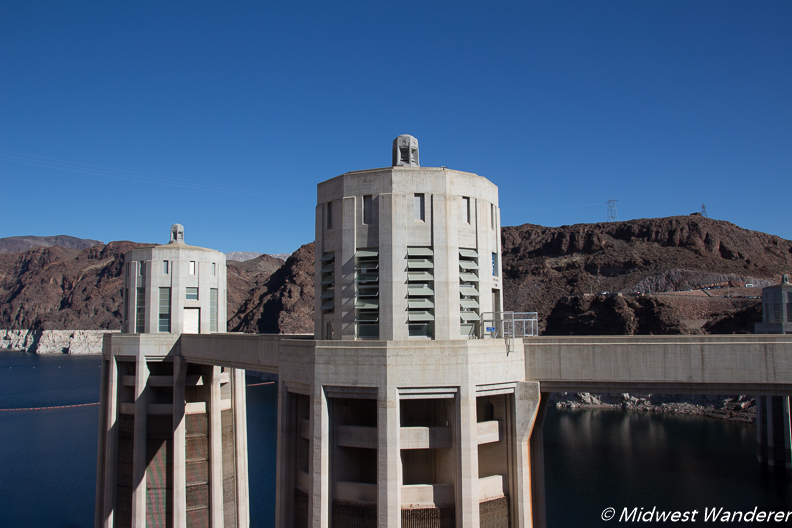 Two of the four intake towers at Hoover Dam

I couldn’t leave without rubbing the feet of the Winged Figures of the Republic, a bronze sculpture near the Old Exhibit Building. Rubbing the statue’s feet is said to bring you luck. Since we were staying at a casino hotel, I could use the luck. 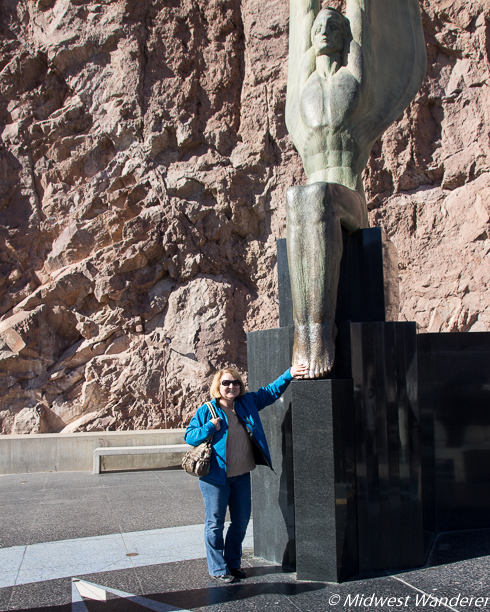 If you visit Hoover Dam

Hoover Dam is about 30 miles southeast of Las Vegas, Nevada, or 75 miles northwest of Kingman, Arizona. There is no charge for parking at or walking on the Mike O’Callaghan – Pat Tillman Memorial Bridge. However, there is a $10 parking fee for the Hoover Dam and also a charge for the tour. Check the website for information on the various tours, security requirements and other details.

Accommodations near Boulder City, Nevada: Find the best deal, compare prices, and read what other travelers have to say at TripAdvisor

Disclosure: This article contains an affiliate link, which means that if you book a room using this link, I will receive a small commission at no additional cost to you.

10 thoughts on “Hoover Dam from 3 Views”

Before this summer, I knew little about Wild Bill Hickok. Then, within just a few weeks, we visited three places within Kansas and Illinois that all shared Hickok stories—quite a coincidence. I learned several fascinating facts about him. Here are END_OF_DOCUMENT_TOKEN_TO_BE_REPLACED