Major League Baseball has Wrigley Field, attracting fans as much for the old-time ballpark atmosphere as for the game itself, with its ivy covered brick walls and manual scoreboard. Likewise, summer collegiate Northwoods League baseball has Simmons Field, another historic ballpark, albeit on a much smaller scale. Simmons Field is home to the Kenosha Kingfish. 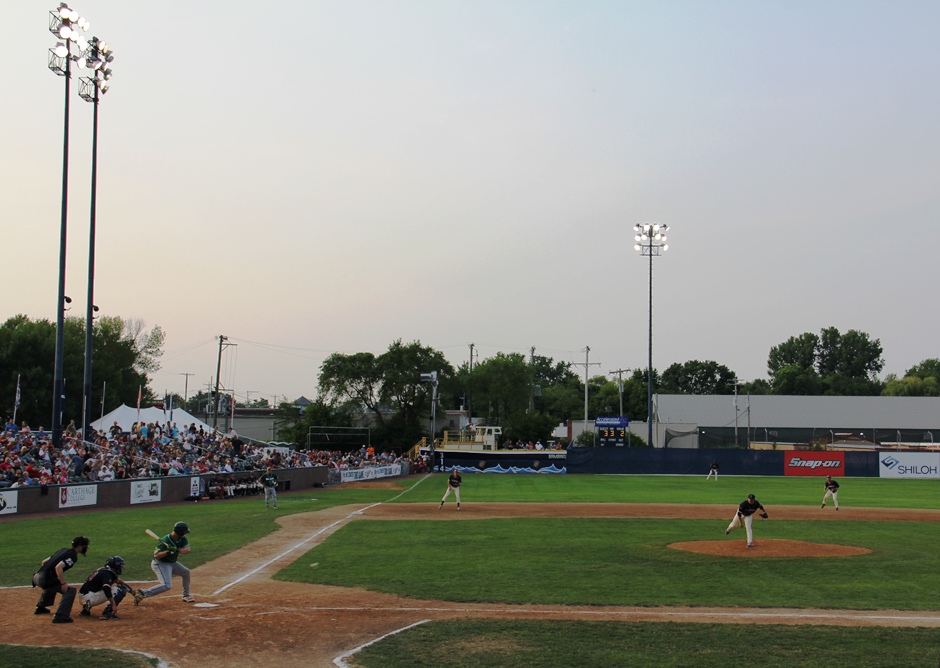 In a time when the trend is to build new, large minor league stadiums, with some seating as many as 10,000, the Kenosha Kingfish owners held onto tradition. They renovated the existing Simmons Field instead, retaining the historic charm but adding many modern-day amenities. 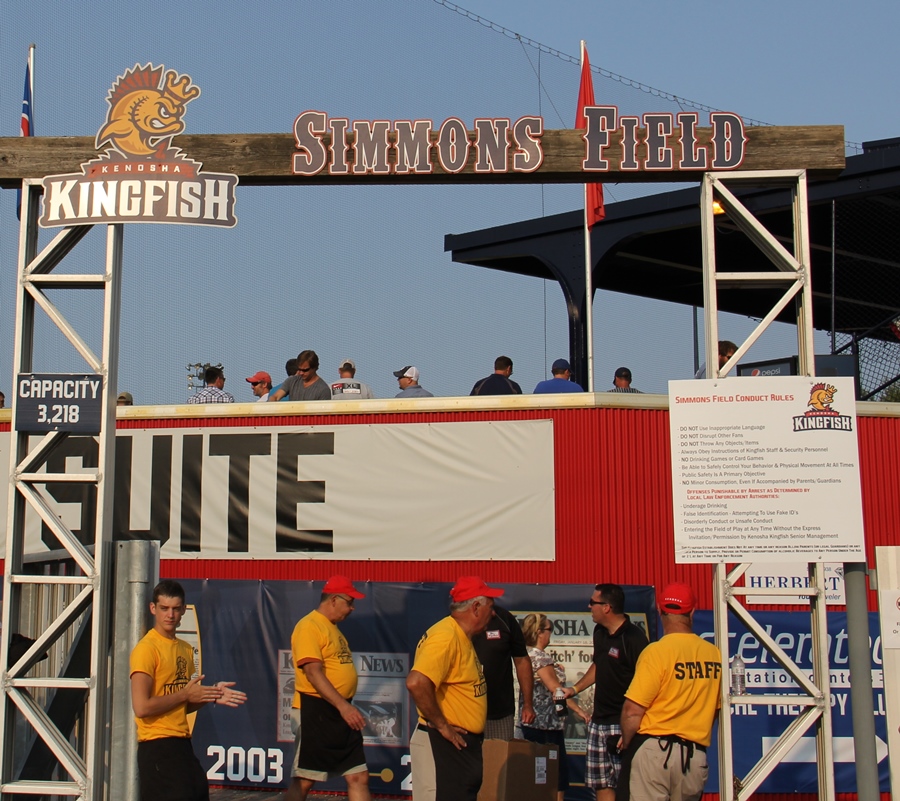 The Simmons Mattress Company originally built Simmons Field in 1920 for its factory baseball team, the Simmons Bedmakers. The grandstand burned down the same year and was rebuilt in 1930. Since then, the All-American Girls Professional Baseball League and minor league baseball teams have used the field.

Among renovations made to Simmons Field are the addition of table seating—with table service—behind home plate. Or choose to sit in one of the of 2,097 recycled stadium seats from Oriole Park in Camden Yards. Kids enjoy a bounce house, sandbox and a Bobble Head Ring Toss game. 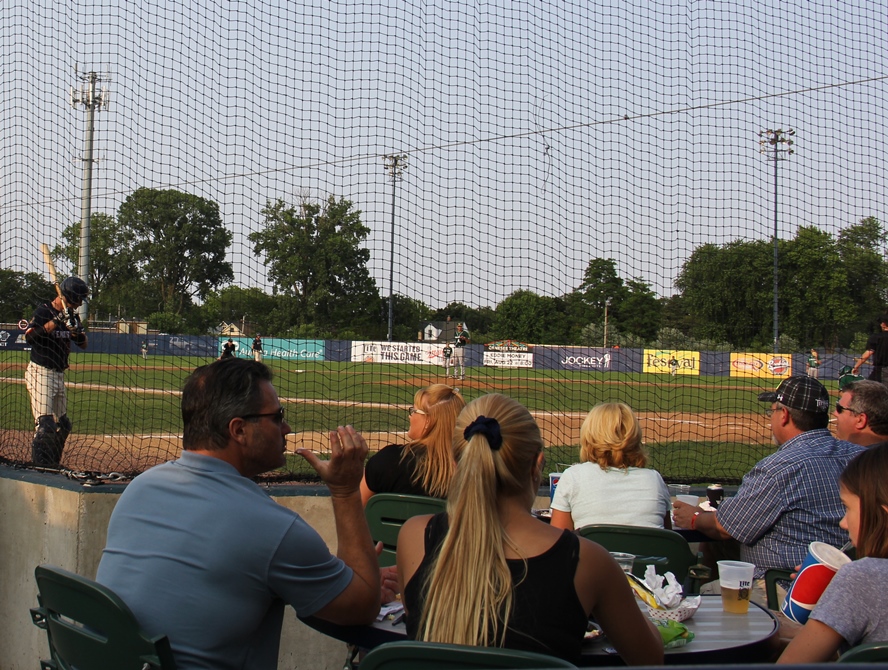 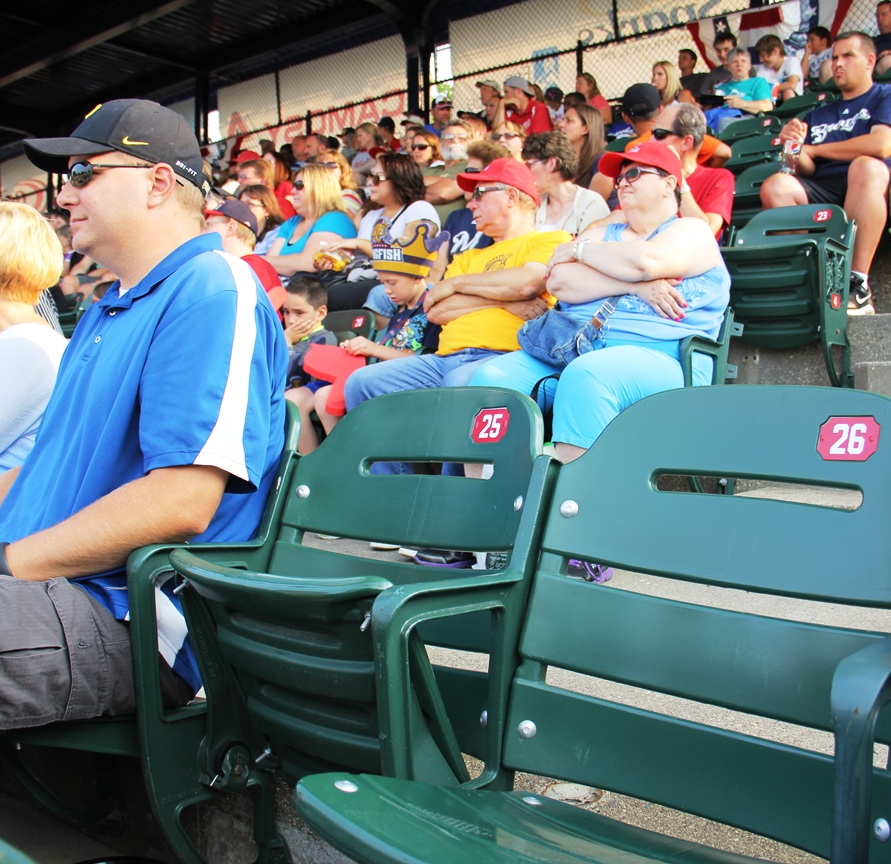 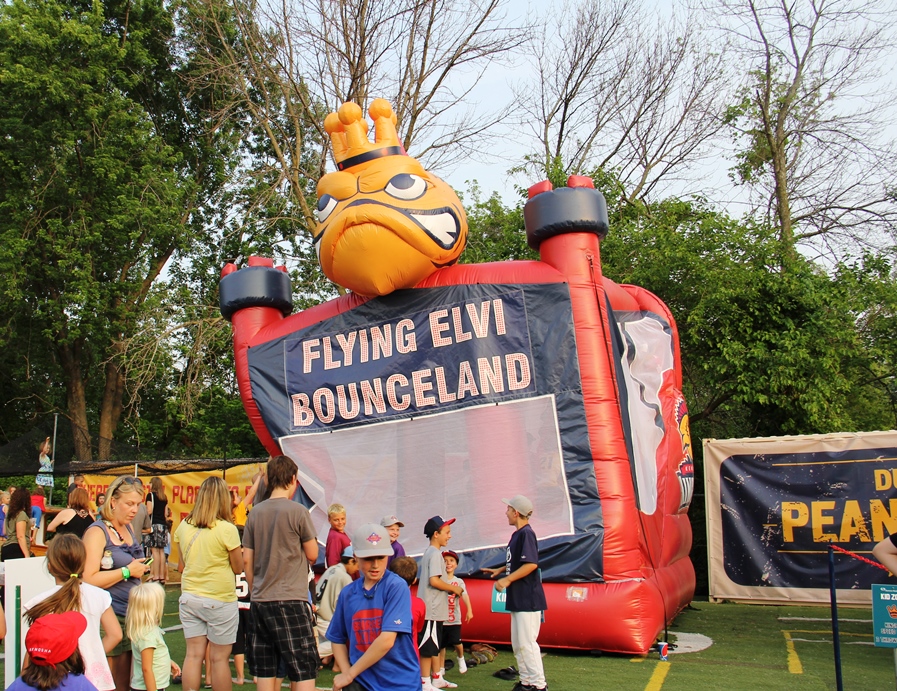 Like most minor league and collegiate-level baseball, Kenosha Kingfish games are family oriented. Besides the children’s area, kids and adults alike are entertained with between inning events that often include kids racing around the bases. During the game we attended, we were event treated to a race down the third-base line on a toilet! 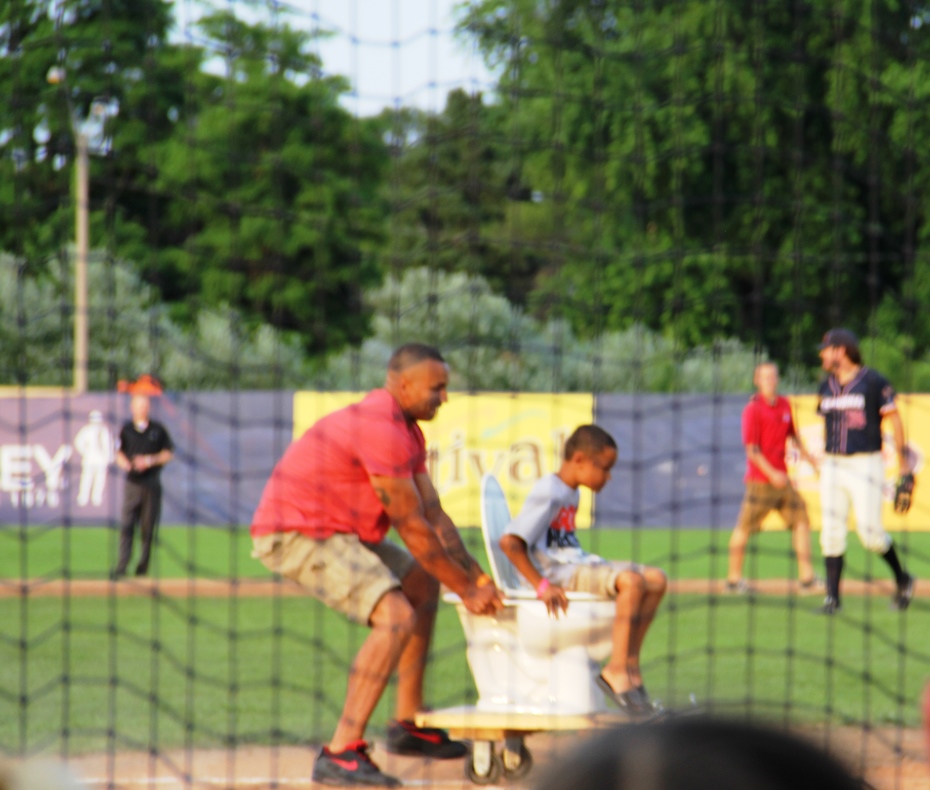 The team mascot, King Elvis the First, is a cross between a kingfish and Elvis Presley. 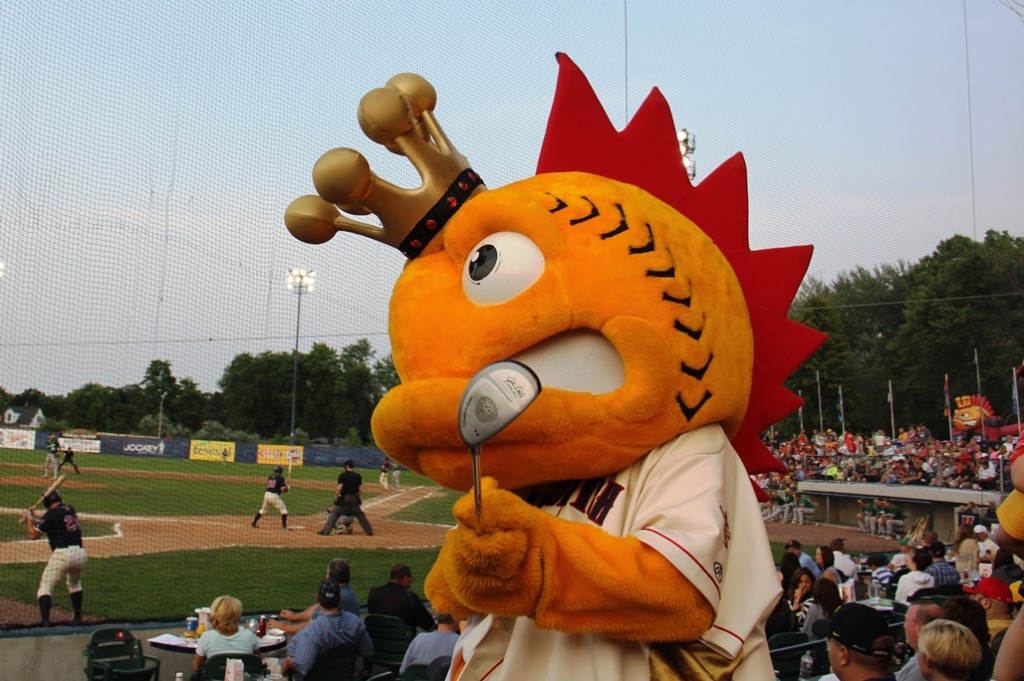 Other entertainment includes the Dancing Elvi, who you may fist encounter as parking lot attendants. 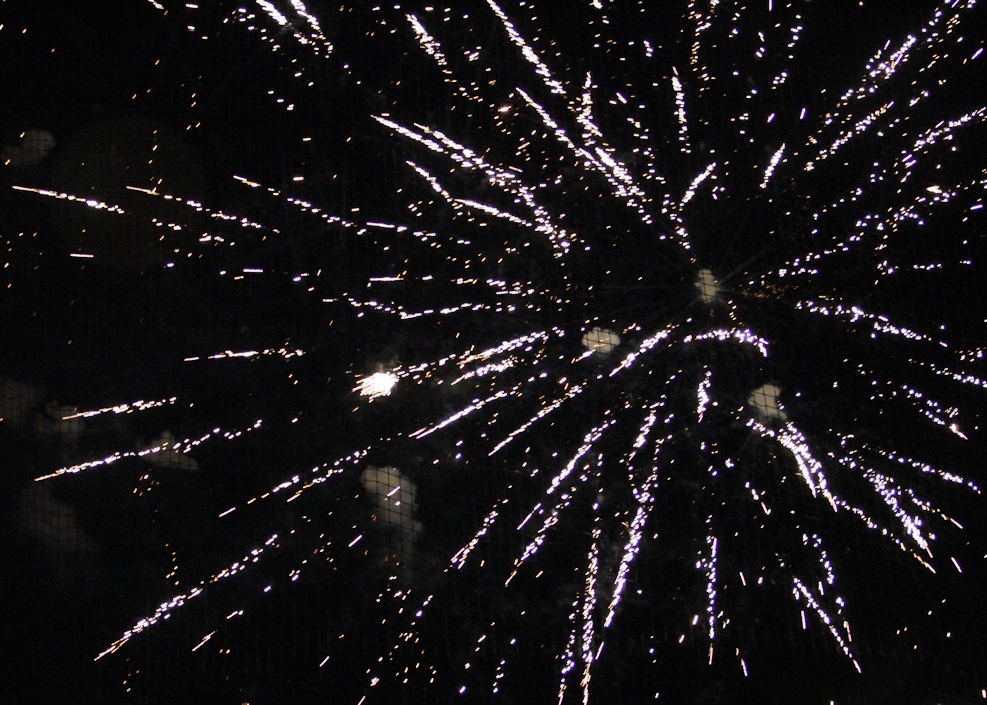 Concessions include traditional baseball foods like hot dogs, hamburgers and beer. Since this is Wisconsin, of course, brats are on the menu, too. The night we attended, the menu special was brats with wild rice and mushrooms. Now that’s something you won’t find at most ballparks. 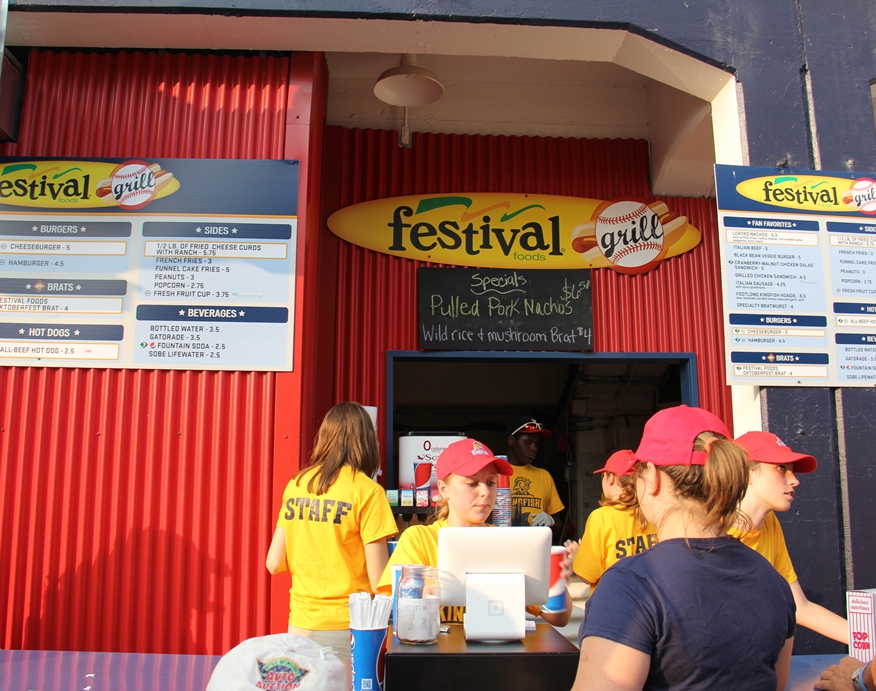 The Kingfish season runs from the end of May to the first or second week in August. Check  the Kenosha Kingfish website for schedule and ticket information. Simmons Field is located at 7817 Sheridan Road in Kenosha, Wisconsin.

Check rates and reviews of Kenosha hotels on TripAdvisor 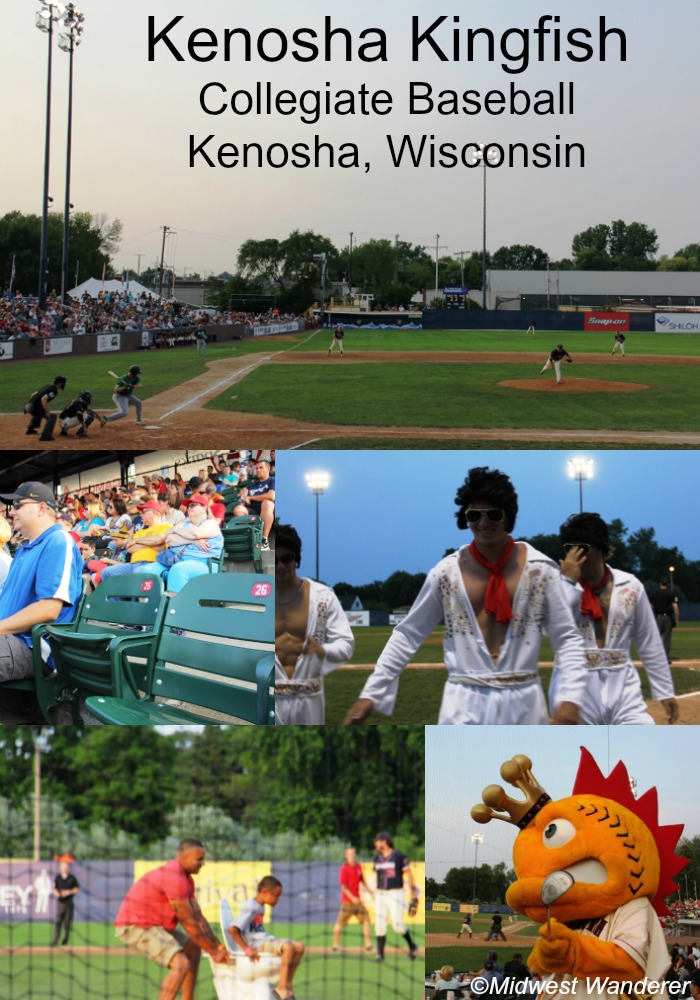 Disclosure: The Kenosha Kingfish and the Kenosha Area Convention & Visitors Bureau hosted us at the game, but any opinions expressed in this post are my own.

Thank you for reading Midwest Wanderer. Don’t miss a post. Enter your e-mail address below and click Subscribe. We will then notify you whenever we publish another post. Subscription is FREE. After subscribing, be sure to click the link when you get the e-mail asking you to confirm.   – Connie

Before this summer, I knew little about Wild Bill Hickok. Then, within just a few weeks, we visited three places within Kansas and Illinois that all shared Hickok stories—quite a coincidence. I learned several fascinating facts about him. Here are END_OF_DOCUMENT_TOKEN_TO_BE_REPLACED