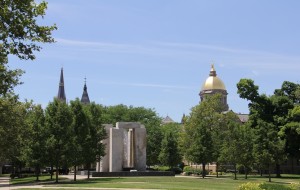 Football, the Gold Dome and top academics were really the only things I knew about the University of Notre Dame before I toured the campus last month. Having been there only once, decades ago, I didn’t remember, or maybe didn’t appreciate at the time, the beauty of the campus, including the fascinating art and architecture, as much a draw for tourists as the school’s athletics programs.

I had the honor of taking a tour led by 1964 Notre Dame alumnus Jack Lafferty, who often conducts private group tours of the campus and is a wealth of information about the buildings, the artwork and the history of the university.

There are so many different varieties of trees on the grounds, the campus can actually be considered an arboretum. From the beginning, Father Sorin, the university founder, brought a diverse variety of trees to the campus, and the tradition continued later. This sycamore is about 250 years old. 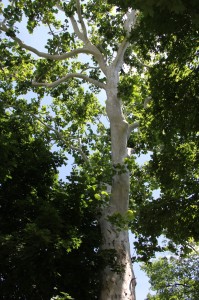 The Main Building, used mostly for administration today, was built in 1879 after the original building was destroyed in a fire. In the beginning the Main Building included classrooms, dining and living space. 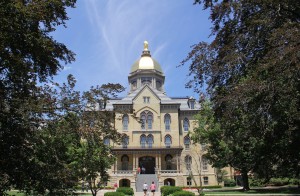 The building, on the National Register of Historic Places, Is best known for its gold dome with a statue of Mary, Mother of God, atop of the dome. The dome has been regilded five times, the latest in 2005 at a cost of $300,000. 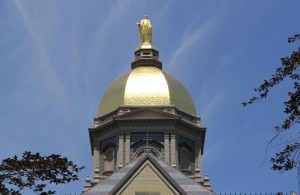 Inside the building, stand in the circle on the floor in the center of the building and look up to see the inside of the dome. 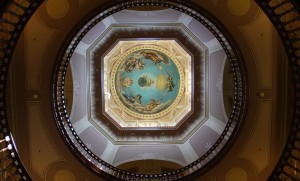 The Rosary Crown, on display in the Main Building was originally planned to be placed on the statue atop the dome. Commissioned in France by university benefactors, the Rosary Crown includes fifteen decades of crystal beads and fifteen plates depicting the mysteries of the rosary. The crown was never placed on the dome but instead was placed on another statue of Mary inside Sacred Heart Church, was stolen, recovered and repaired. 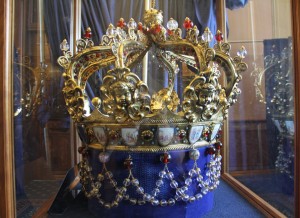 The Grotto at Notre Dame is a one-seventh size replica of the Grotto of Our Lady of the Lourdes in France, where the Virgin Mother appeared to St. Bernadette in 1858. The rosary is prayed at the grotto every day at 6:45 p.m. 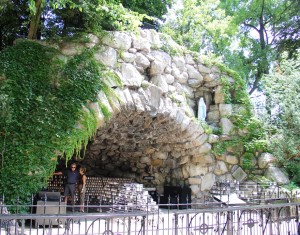 The Basilica of the Sacred Heart may or may not be open to tour, depending on church events, but if you get the chance, do go in. The beauty will astound you. The basilica wasn’t open for tours on my visit, but I went to Sunday Mass there and was able to see it then. 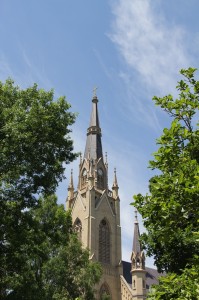 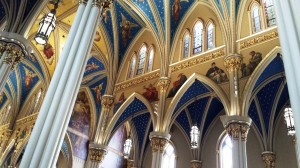 Sculptures and other works of art are scattered throughout the campus, but a few of them stand out due to sheer size. The Stonehenge Fountain serves as a memorial to Notre Dame alumni who lost their lives in the military. 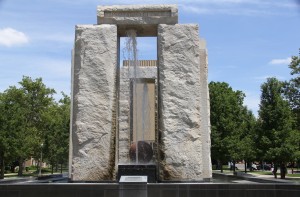 At the Hesburgh Library, a large mural, known as “Touchdown Jesus,” reflects in the Reflecting Pool, creating a double image. 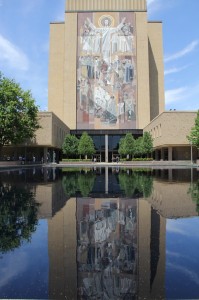 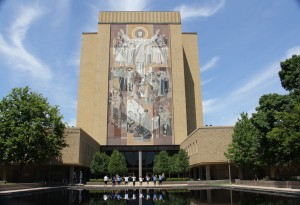 Moving to the athletic side of Notre Dame, you can view seven Heisman trophies in the Sports Heritage Hall of Fame during the school year. Recipients are allowed to take them home during the summer months, so on my visit, only one Heisman trophy was on display. 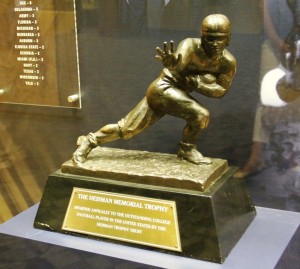 The Sports Heritage Hall of Fame is located in the concourse of the Purcell Center, home to the Fighting Irish basketball and volleyball teams. 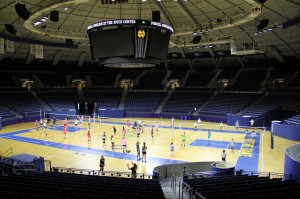 We didn’t get to tour the football stadium, but we did go past it and peek into the gates, which were under construction at the time. 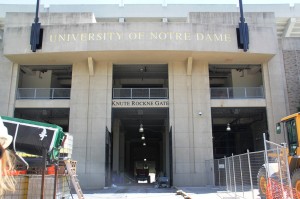 A helmet for each All-American Notre Dame player is on the wall inside the gates. 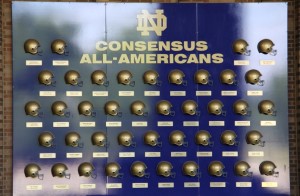 Each of the stadium’s twelve gates is named after a winning coach. Notre Dame has had eleven national championships, so one gate has yet to be named.

The Notre Dame architecture, art and athletics are worth a visit to the university campus. As I mentioned, my tour guide, Jack Lafferty, conducts mostly private tours. However, free public campus tours are led Monday through Friday by Notre Dame students. Tours do not include the stadium. Check the Notre Dame web site for tour details.

Disclosure: My tour of the University of Notre Dame campus was hosted by Visit South Bend, but any opinions expressed in this post are my own.

Howard Steamboat Museum in Jeffersonville, Indiana, pays tribute to the Howard family and their steamboat building company. The tour combines a history of the ornate Edmonds and Laura Howard mansion and the shipyard located across the street, which the Howard END_OF_DOCUMENT_TOKEN_TO_BE_REPLACED