The 1940s-era L-shaped brick building in Clear Lake, Iowa, looks rather plain from the outside. The only indication of the building’s fame is a memorial marker noting the deaths of three 1950s rock-and-roll stars. The Surf Ballroom is the last place that Buddy Holly, Ritchie Valens, and J.P. “The Big Bopper” Richardson played before they lost their lives in a plane crash just a few miles from the ballroom. 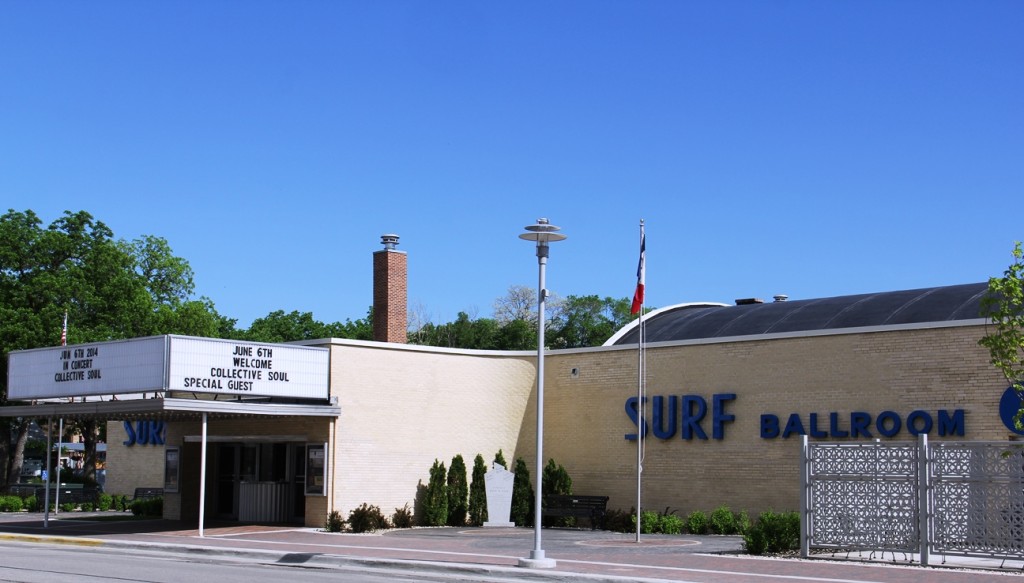 The building’s exterior may be simple, but as soon as I entered the building I was enveloped in awe. A mixed feeling of excitement and sadness, a haunted feeling, came over me as I gazed at the ballroom whose appearance has been frozen in time.

Originally on the shore of Clear Lake, the Surf Ballroom started in 1934 as a big band venue. All of the big stars of the day played there: Lawrence Welk, Tommy Dorsey, Glen Miller and Harry James, to name a few. The building burned down in 1947. A new building—a mirror image of the original—was built across the street, opening in July 1948.

The day the music died

As rock and roll took hold in the 1950s, the Surf Ballroom began booking popular artists, like Ricky Nelson and the Everly Brothers. On February 2, 1959, the Surf hosted the “Winter Dance Party.” The “Winter Dance Party” was a whirlwind Midwest Tour starring several performers, including Buddy Holly, Ritchie Valens, J.P. Richardson, Waylon Jennings and Tommy Allsup, Traveling in the harsh winter weather was taking a toll on the entertainers. The heat on the bus they used to get from engagement to engagement, sometimes hundreds of miles apart, didn’t work well. The bus was so cold that Carl Bunch, Buddy Holly’s drummer ended up with frostbite and dropped out of the tour. 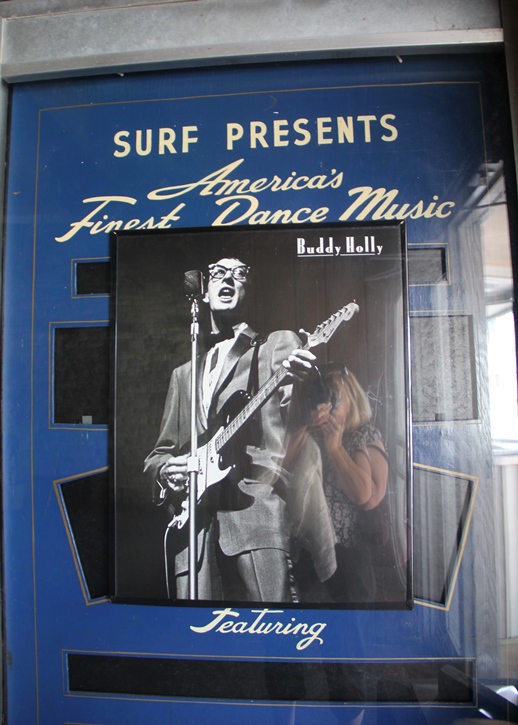 Following the show at the Surf Ballroom, Buddy Holly hired a private plane to get to their next venue. Seating was limited, so only Holly, Tommy Allsup and Waylon Jennings were scheduled to take the flight. However, Jennings gave up his seat to J.P. Richardson, who was battling the flu. Ritchie Valens begged to get on the flight and “won” a seat on the plane through a coin toss with Allsup. Minutes after taking off with 21-year-old pilot Roger Peterson, the plane flipped and crashed in a farm field six miles northwest of the local airport. All four aboard lost their lives.

The ballroom hasn’t changed much since 1959. The carpet in the entryway is a replica, but the wood floor, the stage and the booths are all original. The ballroom was designed to resemble an ocean beach club, with palm trees lining the walls. The barrel vaulted ceiling was painted the color of a night sky on which stars were projected, and fish were painted on the sides of the booths. 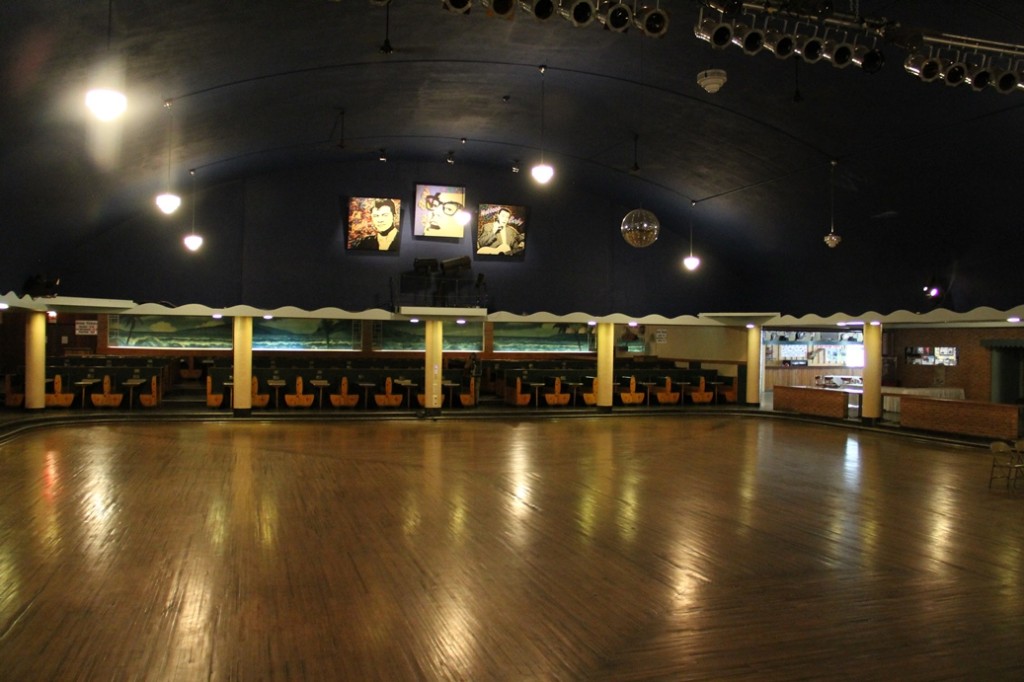 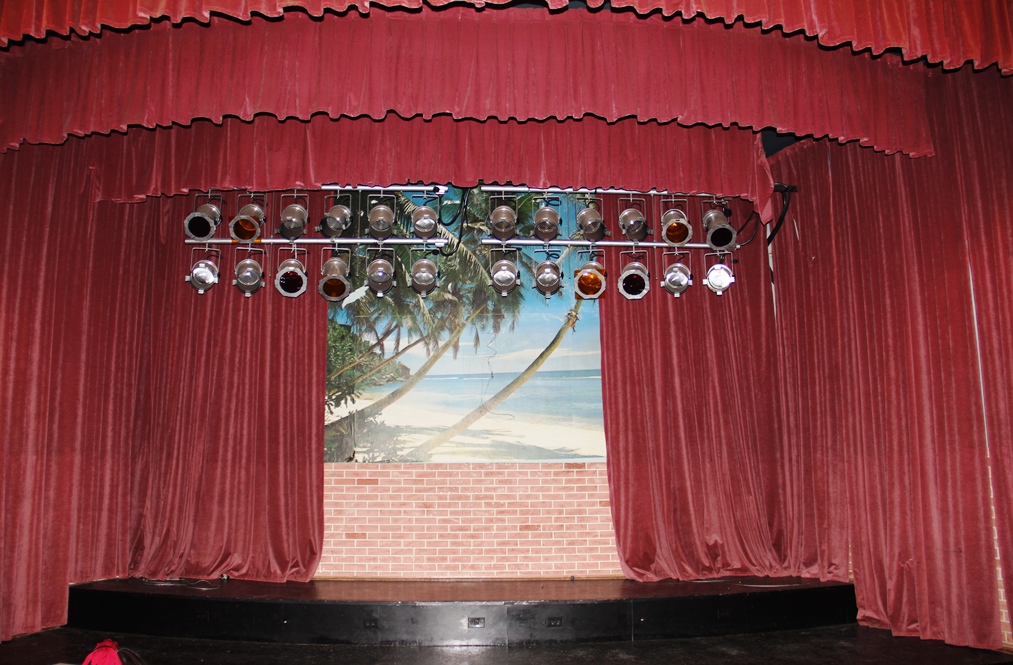 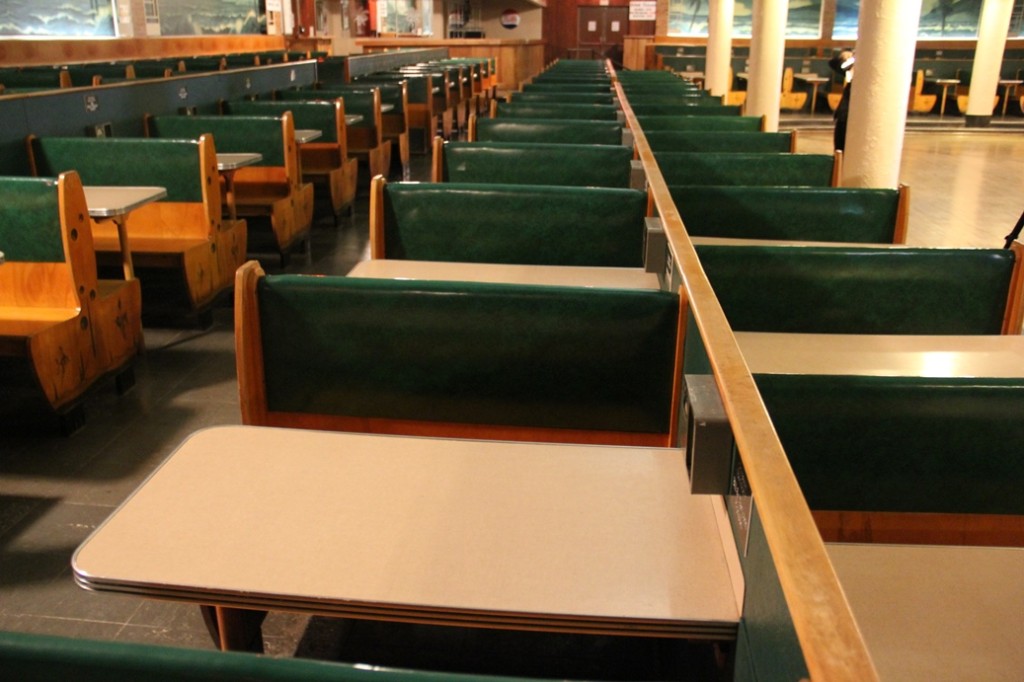 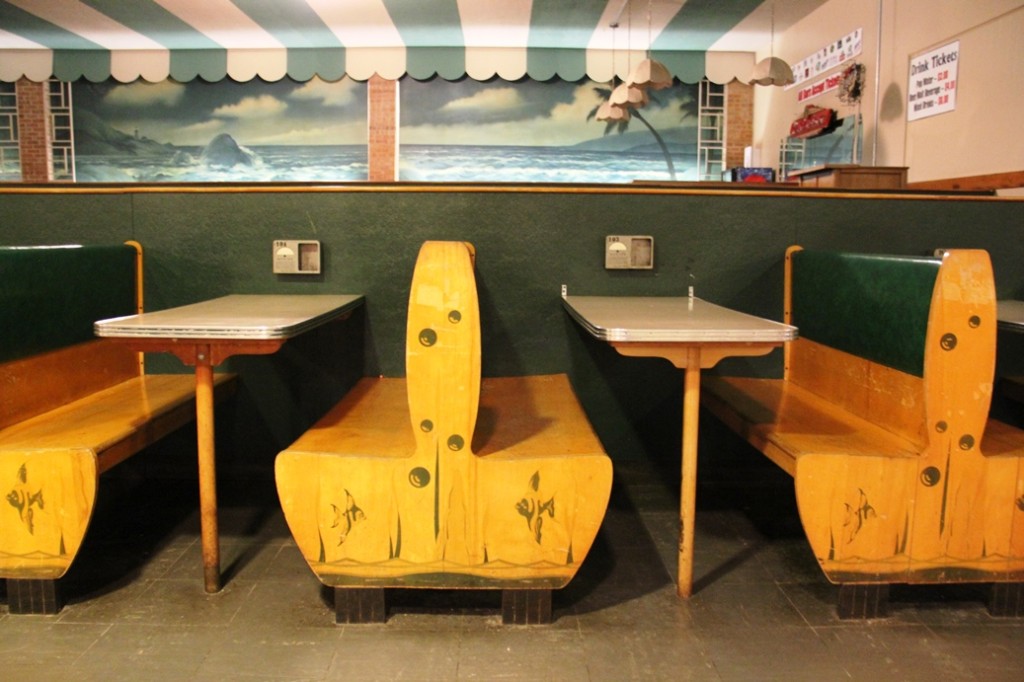 The booths themselves have a story behind them. They used to have drawers beneath the seats where women would store their purses while they danced. The drawers were removed when it was found that patrons were sneaking in liquor and hiding it in the drawers. A light-up button on the booth wall indicated the booth was taken so no else sat there while the guests were dancing. A second button indicated to the waitress that guests wanted a drink refill. 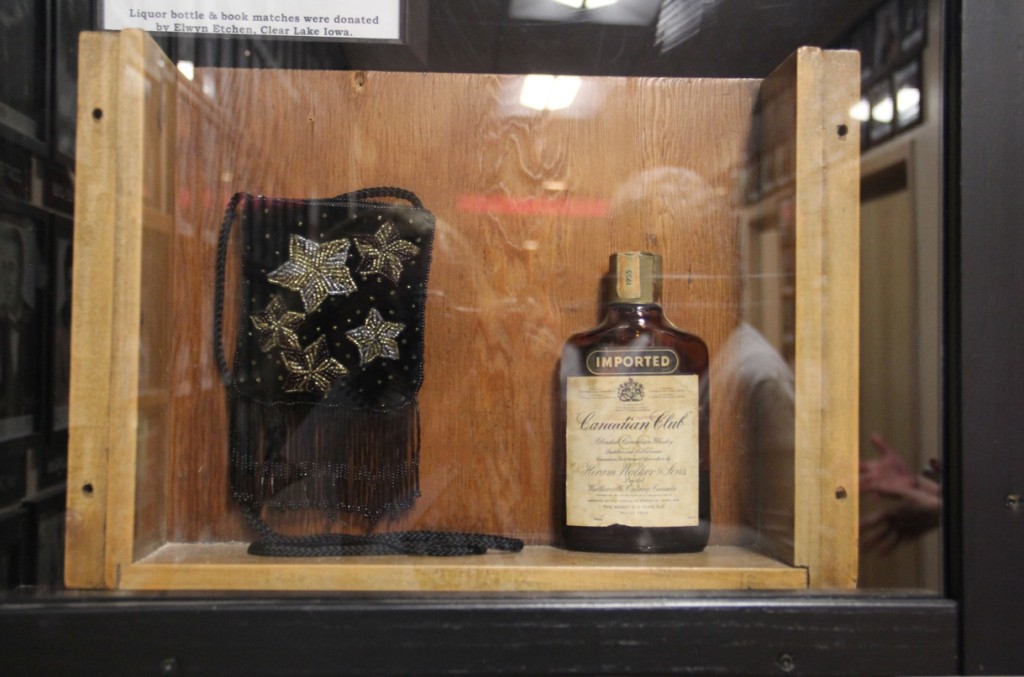 Just off the side of the stage, the green room walls, ceiling and even the doors are filled with hundreds, if not thousands, of autographs. Performers who have played there, as well as other celebrities who have visited have signed the walls. Don McClean wrote the first verse of American Pie, a song about the tragic 1959 event, on the wall. Ritchie Valens’ family painted a picture of Valens. 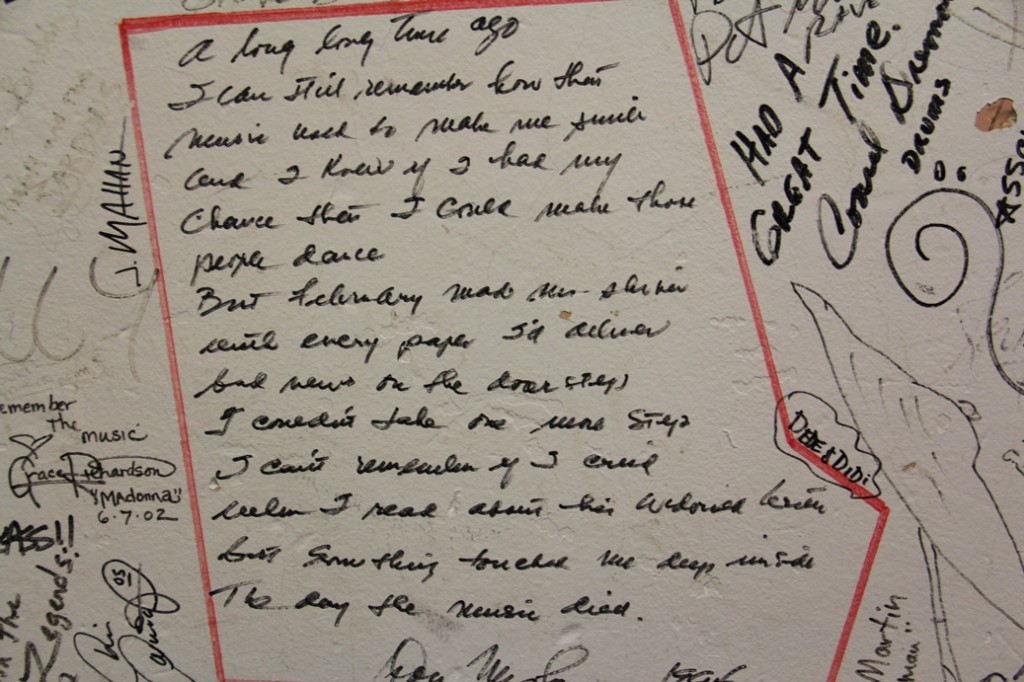 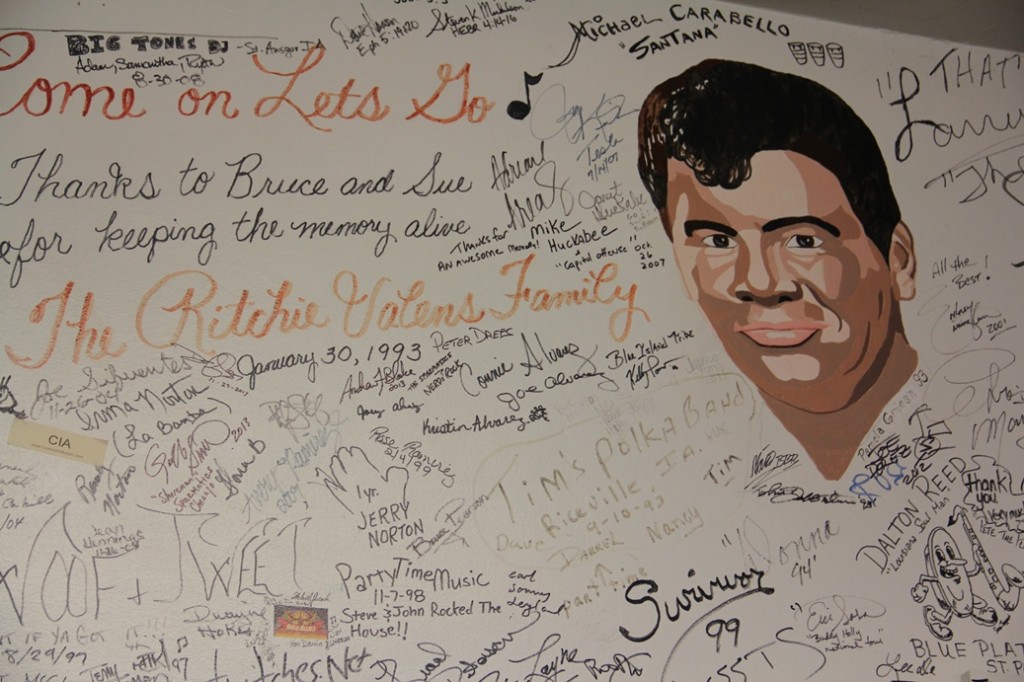 In the lobby, photographs of stars cover the walls. Many of the photographs are part of the Wayne’s World collection, photos that Wayne Christgau, a Surf Ballroom fan from childhood and a longtime employee, had taken of himself with the performers. 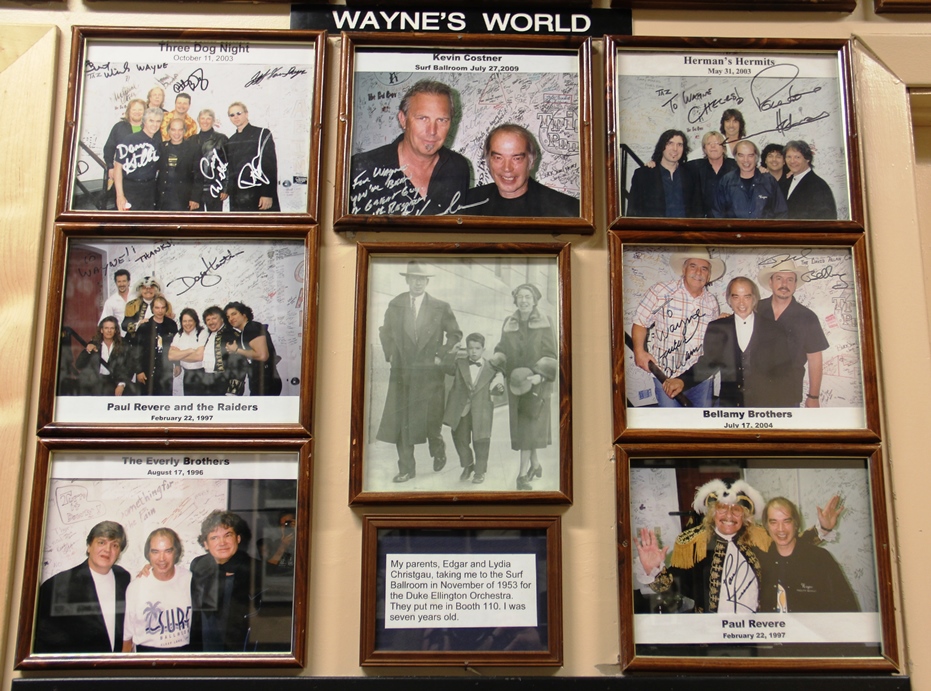 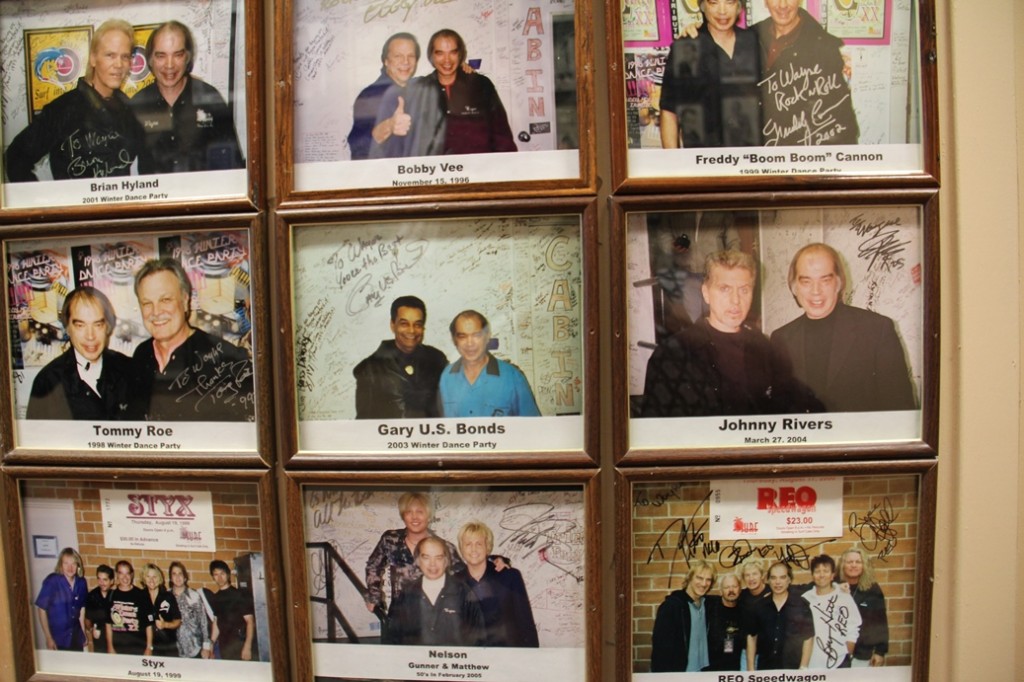 A small museum includes more photos of many artists who have taken the stage at the Surf Ballroom. There is also memorabilia about the three who lost their lives in the plane crash. The memorabilia includes Big Bopper’s briefcase that survived the crash.

The Winter Dance Party at the Surf Ballroom was revived in 1979, which today has become a four day event.

Not far from the Surf Ballroom, you can visit the memorial site of the plane crash. It’s on a farm on private property, but it’s okay to visit. You’ll see the big Buddy Holly glasses from the road. 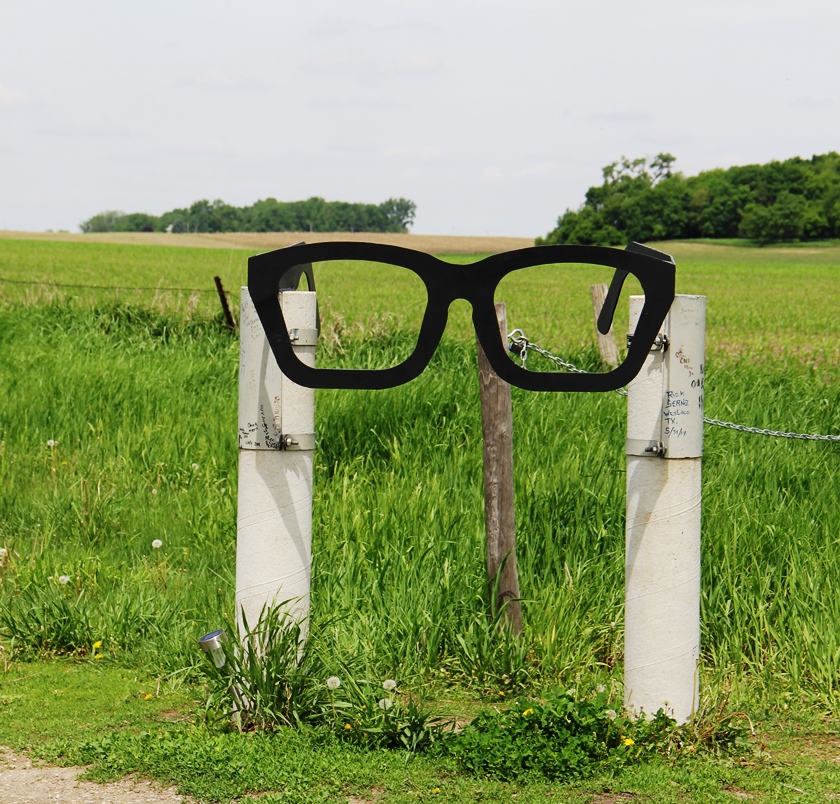 Park there and walk the path about a half mile to the memorial that marks the exact site where the plane came to rest. Visitors often leave memorabilia like Buddy Holly glasses or coins. The course signify the coin toss that cost Ritchie Valens his life and saved Allsup. You’ll find directions to the site on the Surf Ballroom Memorial Site web page. 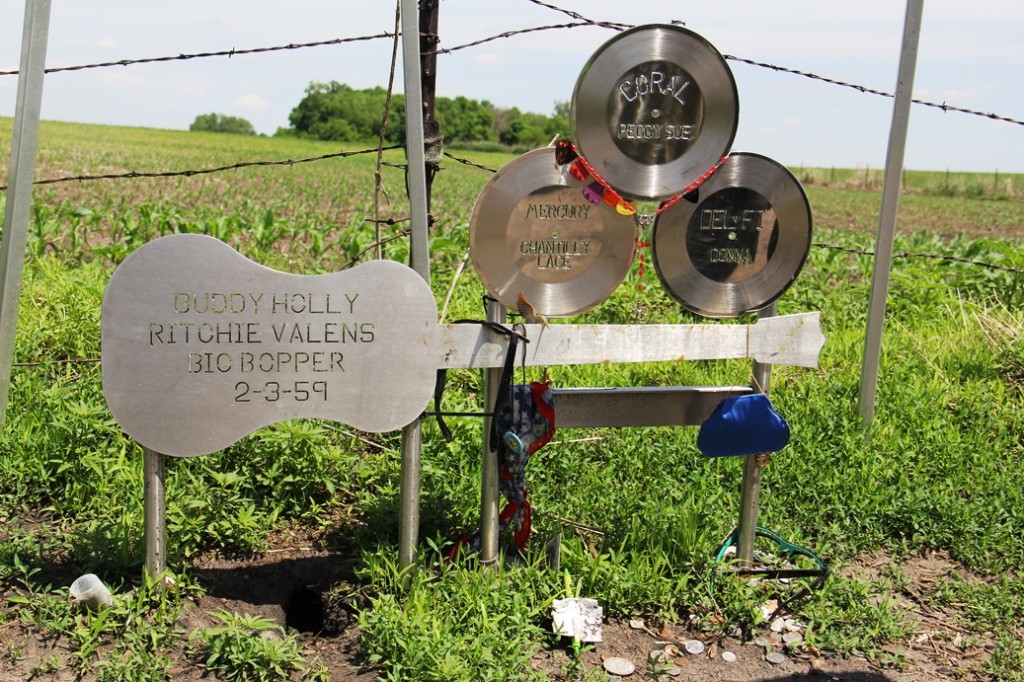 If you visit the Surf Ballroom

The Surf Ballroom is located at 460 North Shore Drive in Clear Lake, Iowa. There is not a guided tour, but you are welcome to walk in and look around. Check the web site for hour

Accommodations: During my visit to the Surf Ballroom, I stayed at the Historic Park Inn, in neighboring Mason City. The Historic Park Inn is the only surviving Frank Lloyd Wright designed hotel. Find the best hotel deal, compare prices, and read what other travelers have to say at TripAdvisor. 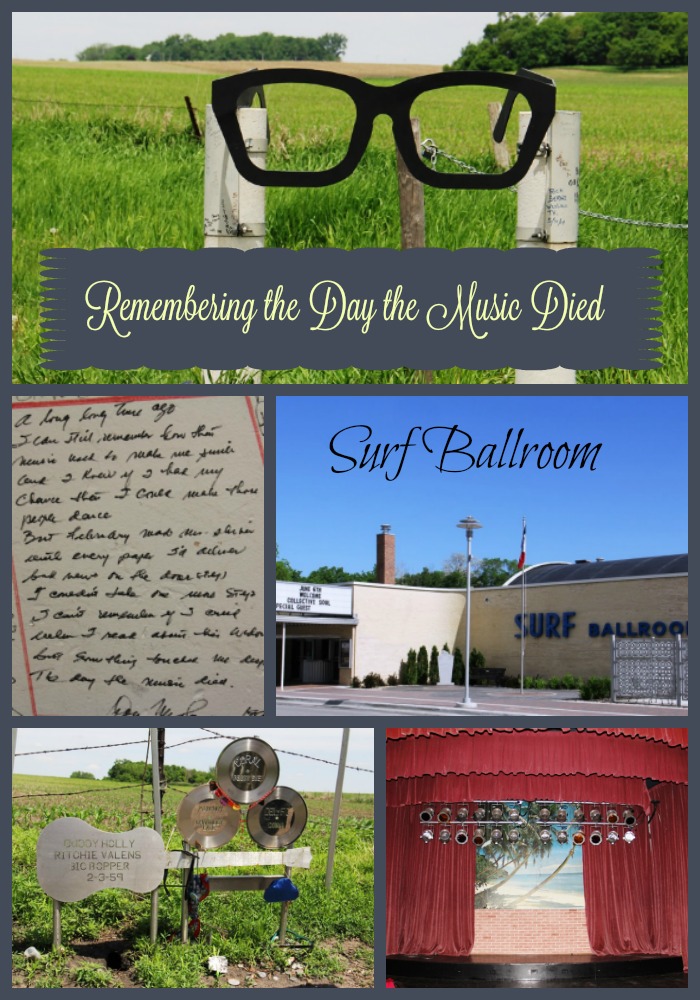 Disclosures: The Iowa Tourism Office hosted my visit to the Surf Ballroom. However, any opinions expressed in this post are my own.
This article contains an affiliate link. If you book a room through the TripAdvisor link above, I will receive a small commission. There is no additional cost to you.

Thank you for reading Midwest Wanderer. Don’t miss a post. Enter your e-mail address below and click Subscribe, and we will notify you whenever we publish a new post. Subscription is FREE. After subscribing, be sure to click the link when you get the e-mail asking you to confirm.   – Connie

Howard Steamboat Museum in Jeffersonville, Indiana, pays tribute to the Howard family and their steamboat building company. The tour combines a history of the ornate Edmonds and Laura Howard mansion and the shipyard located across the street, which the Howard END_OF_DOCUMENT_TOKEN_TO_BE_REPLACED