We spent the early evening at a murder-mystery dinner in Pythian Castle’s ballroom. Now the mood changed, from light-hearted to eerie, on a 10 p.m. tour of the Pythian Castle. We were going  to look for the ghosts that haunt the building.

The Knights of Pythia fraternal organization built Pythian Castle in Springfield, Missouri, in 1913. The building served as an orphanage and a retirement home for organization members and their children. In 1942 the military took it over for use as a service club. It’s also rumored that German prisoners of war were kept in basement cells. 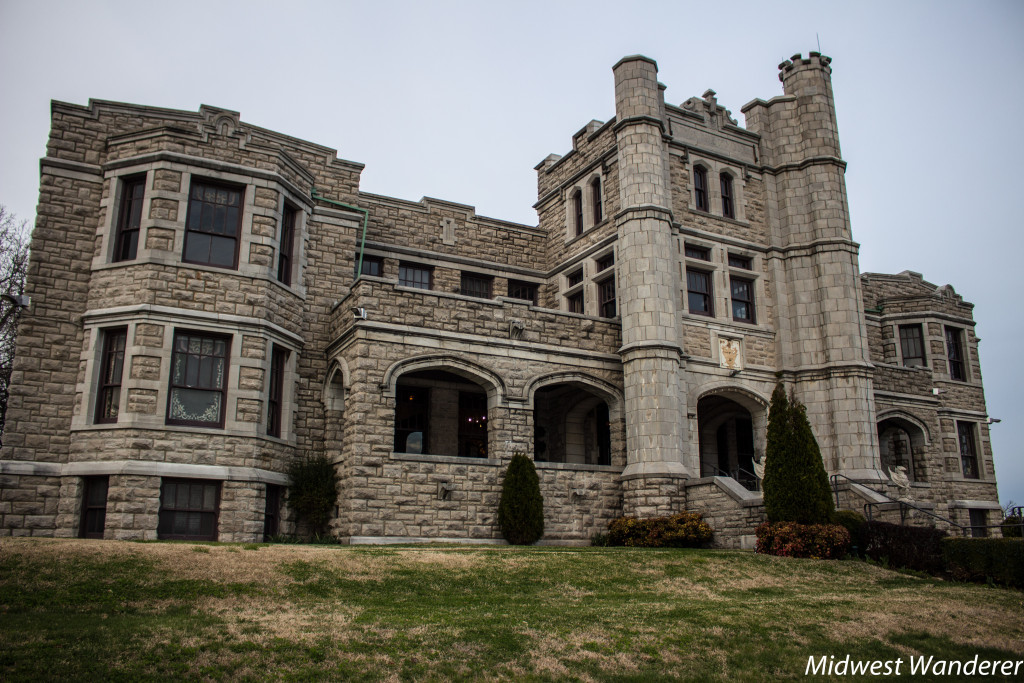 After the military abandoned the building, it sat vacant for years and fell into. Three times a local university turned down offers to take possession of the building, free of charge. The land the castle sat on was worth less than the cost to raze the building. It castle finally sold at auction for a mere $1300 and later was resold to the current owners, Tamara Finocchiaro and her mother. The women were specifically looking to purchase a castle.

Through lots of hard physical labor the women have beautifully restored much of the building, and the work continues.

Ghost stories are abundant here. Some of the ghosts are children and some are adults. Our guide, Tim Piland, told us that the ghosts often make themselves known during these tours.

Tim began our tour in the ballroom with an overview of the castle’s history. He related his own experiences with the ghosts, starting on the night he was recruited to castle-sit while the owners were away. He led us through the kitchen, down narrow, steep cement steps to the dimly lit, dank basement, which we explored in three segments.

The first area was sectioned into several jail cells. This is where many people have captured orbs in photos they’ve taken. Skip set the camera to low-light, slow speed. He got some good photos of the cells, but no orbs. 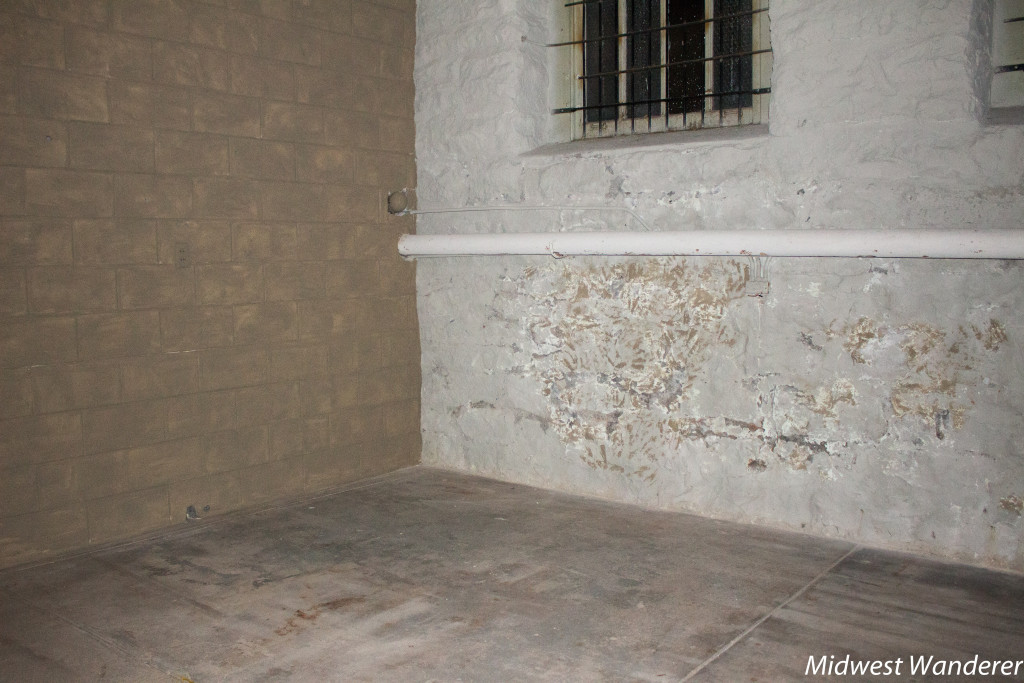 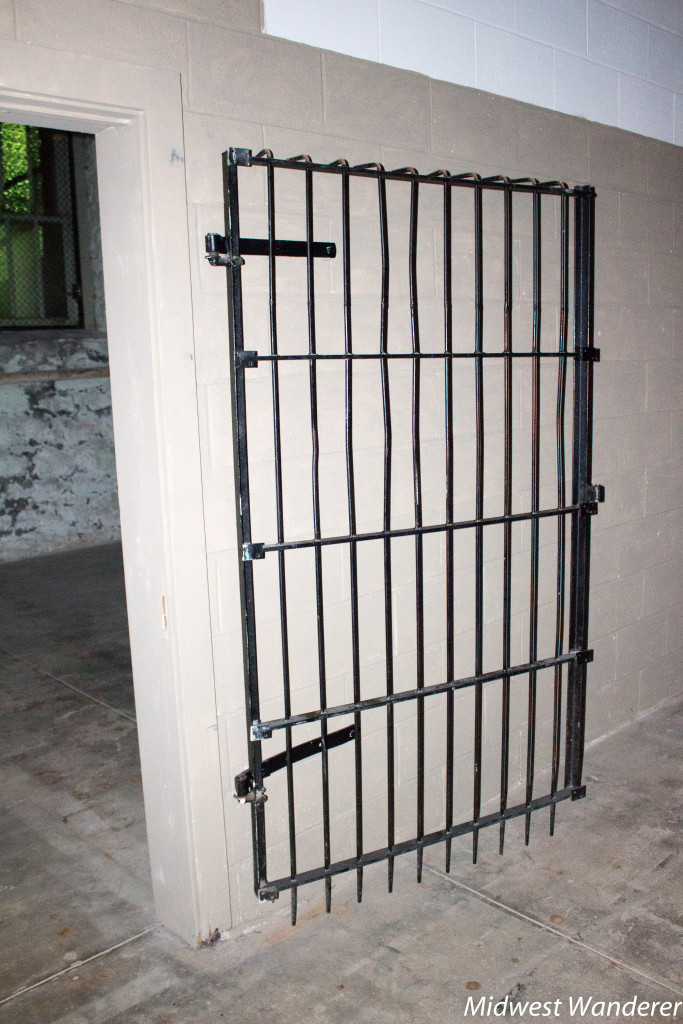 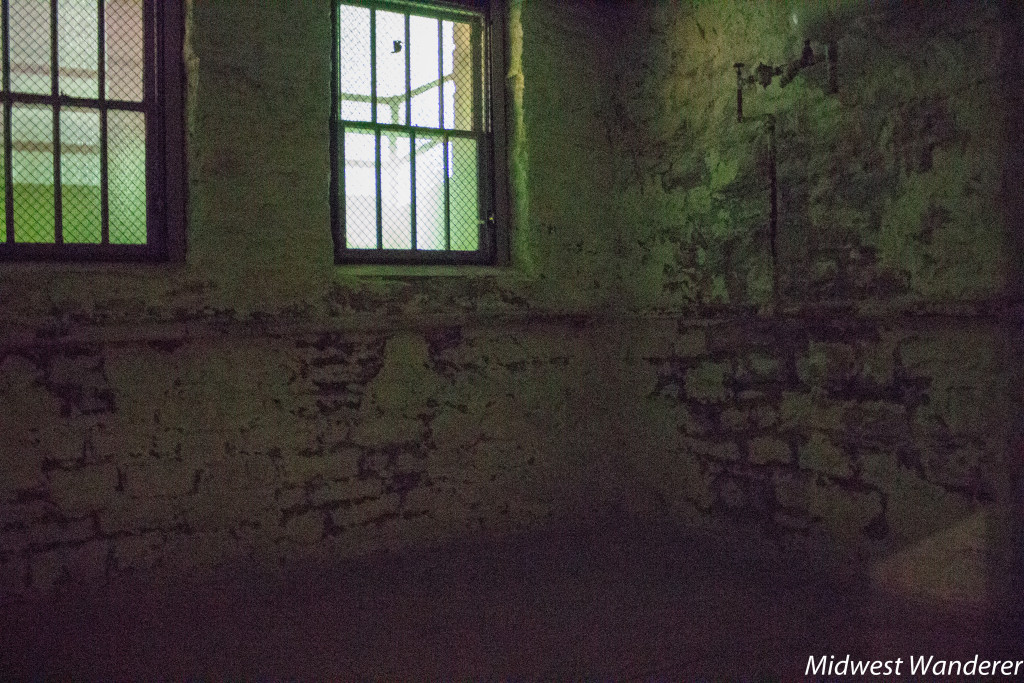 As usual, I had to have my photo taken in jail. I admit I was creeped out by the one. 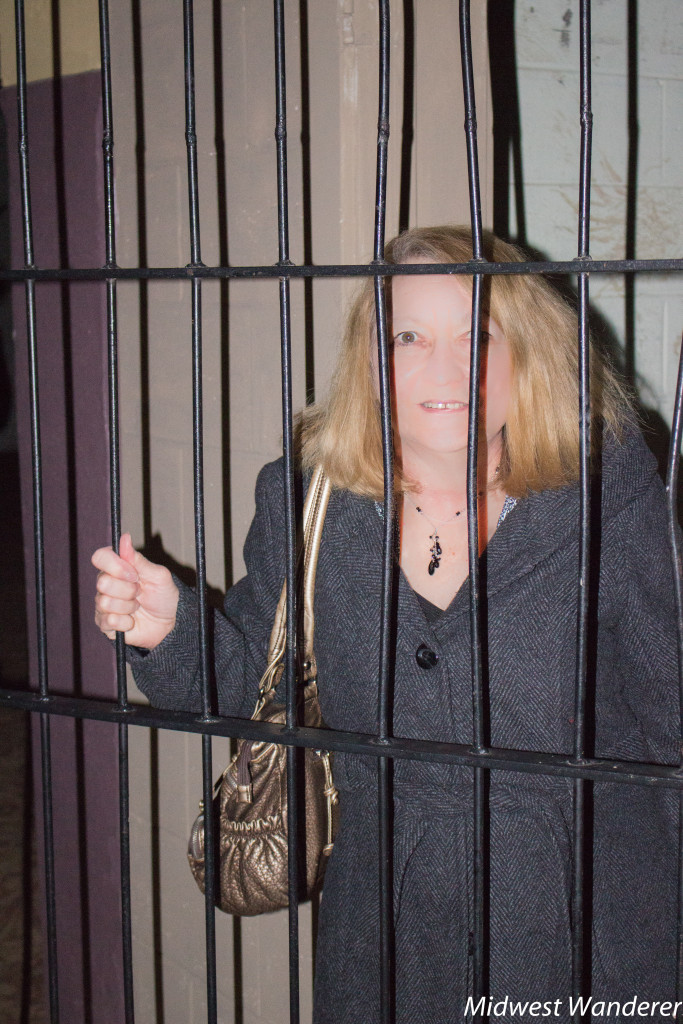 Our next stop was the “dungeon,” a smallish cement room, maybe twelve feet square, that the Pythians originally used as a root cellar. Other visitors have conducted EVP (electronic voice phenomenon) recordings here and have picked up voices. More on that later.

Was it a ghost?

Tim turned off all the lights and called out to the ghosts, identifying himself and asking questions of them, like “Is there a child with us tonight?” and “Is there a soldier?” Silence the entire time. No ghosts revealed themselves.

However, as we were walking out of the dungeon, Skip walked through a cold spot and the hair stood up on the back of his neck. There were no air ducts anywhere around. He’d felt that once before, when we were on a battlefield in Gettysburg on a 90 degree day.

Next we walked single-file down a narrow steam tunnel, only a few feet wide, another area where ghosts are sometimes known to hang out. Nothing. 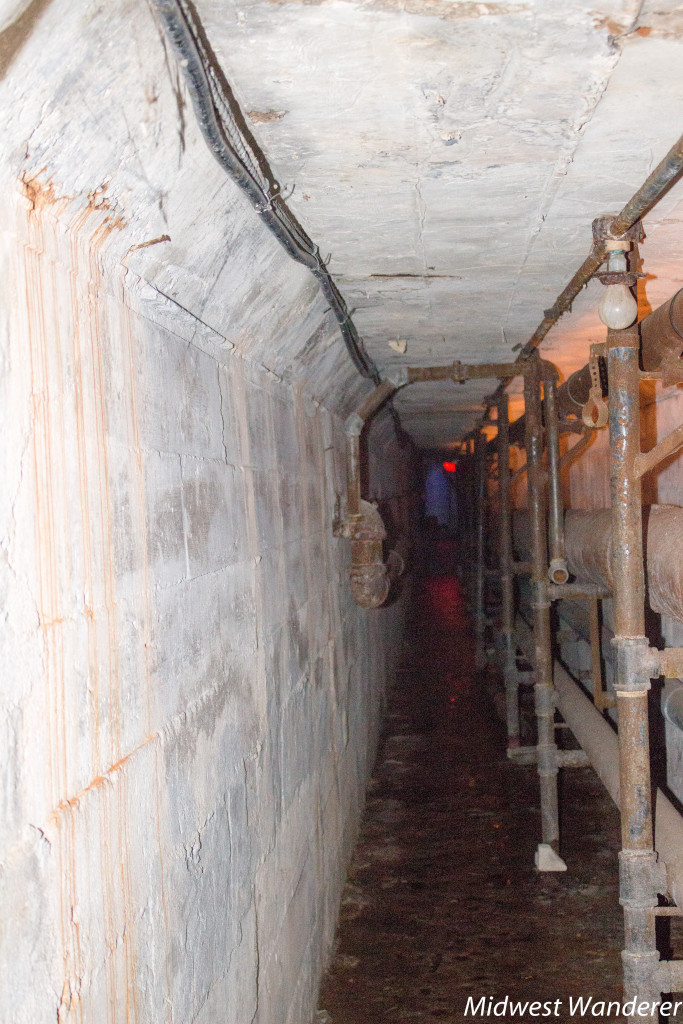 We went up to the third floor for the remainder of the tour. In the theater, where in 1914 you could see a movie for a nickel, Tim played EVP recordings that had captured ghostly muffled voices in the past. 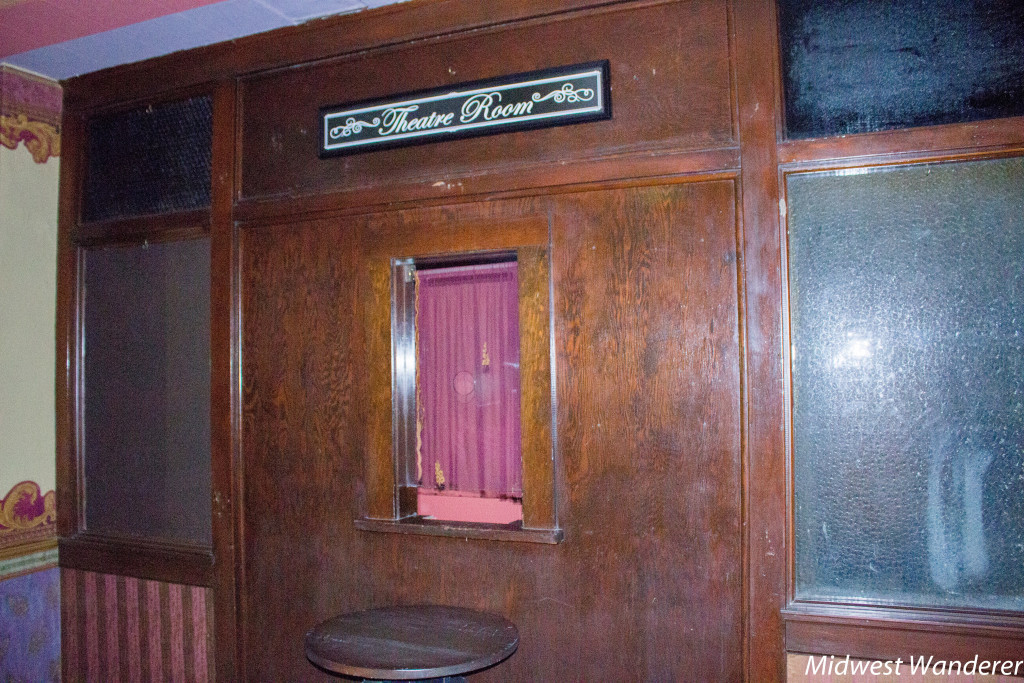 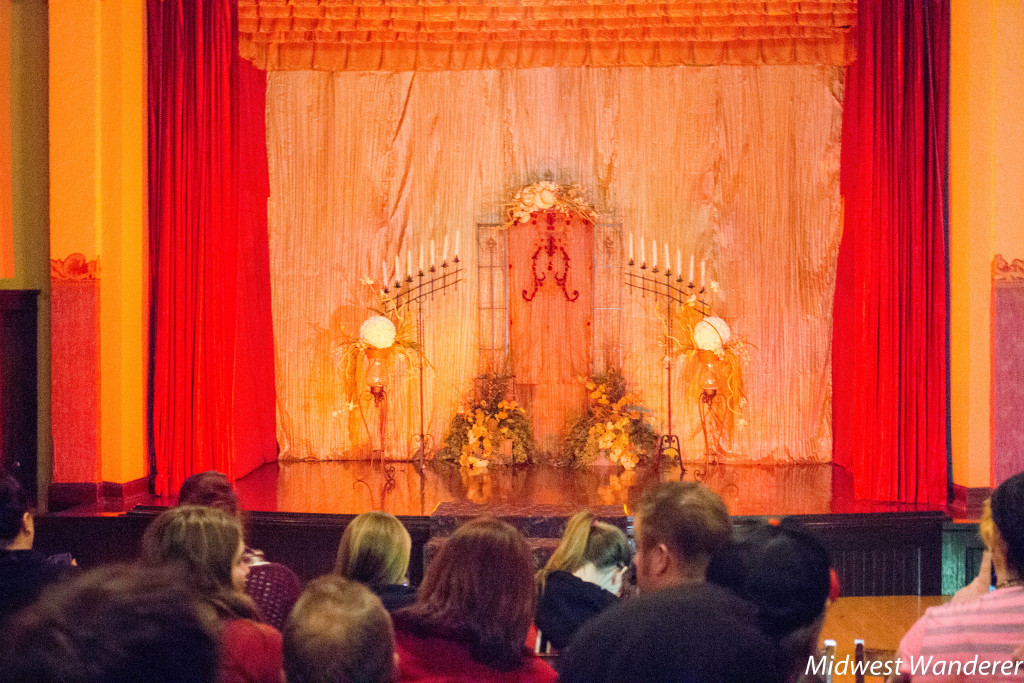 Our last tour stop was the boys’ dormitory, one of the rooms not yet renovated. Tim conveyed a fascinating story here about a young boy who lives in the castle and often makes himself known. A visiting medium had a very specific conversation with him in Tim’s presence mentioning facts the medium could not have known but Tim knew to be true. 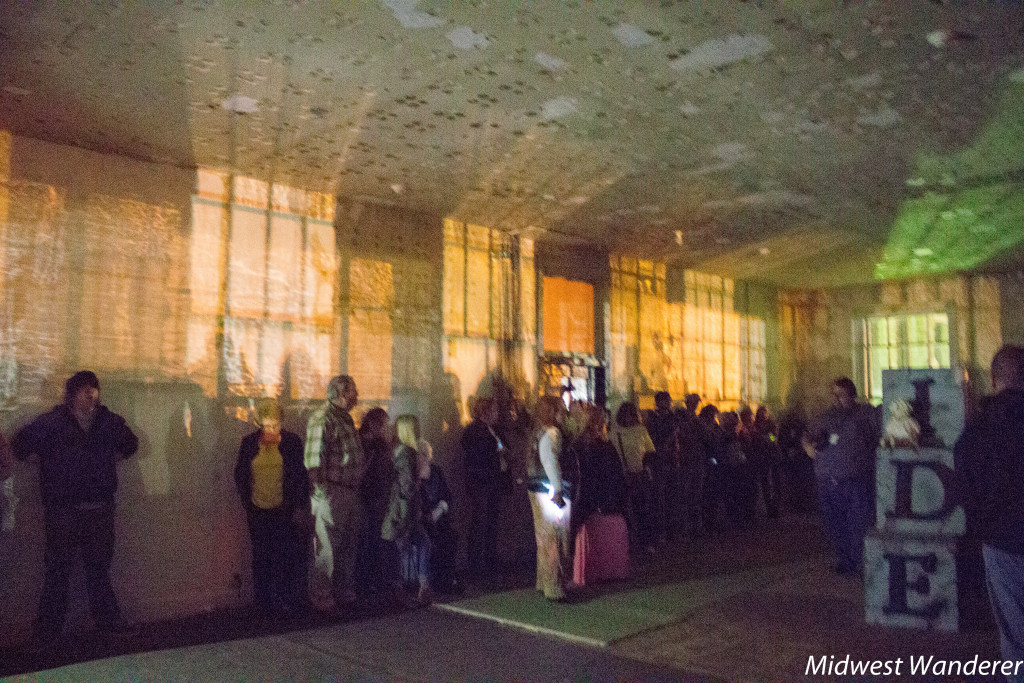 If you take the Pythian Castle ghost tour

Whether or not you believe in ghosts, the tour is fascinating. Daytime ghost tours are conducted daily at 1 p.m. The schedule varies for the night tours led by Tim Piland, but they’re usually on Friday nights. History tours are also available several times daily. Check the Pythian Castle web site for schedules, rates and other details. Pythian Castle is located at 1451 E Pythian Street in Springfield Missouri.

We stayed at the Best Western Plus Coach House on this visit to Springfield. Find the best hotel deal in Springfield, compare prices, and read what other travelers have to say at TripAdvisor.

Disclosures: Our visit to Pythian Castle was hosted by the Springfield Missouri Convention and Visitors Bureau and Pythian Castle, but any opinions expressed in this post are my own.
This article contains an affiliate link. If you book a hotel room through the TripAdvisor link above, I will receive a small commission, at no additional cost to you.

13 thoughts on “Looking for Ghosts in Pythian Castle”

Before this summer, I knew little about Wild Bill Hickok. Then, within just a few weeks, we visited three places within Kansas and Illinois that all shared Hickok stories—quite a coincidence. I learned several fascinating facts about him. Here are END_OF_DOCUMENT_TOKEN_TO_BE_REPLACED